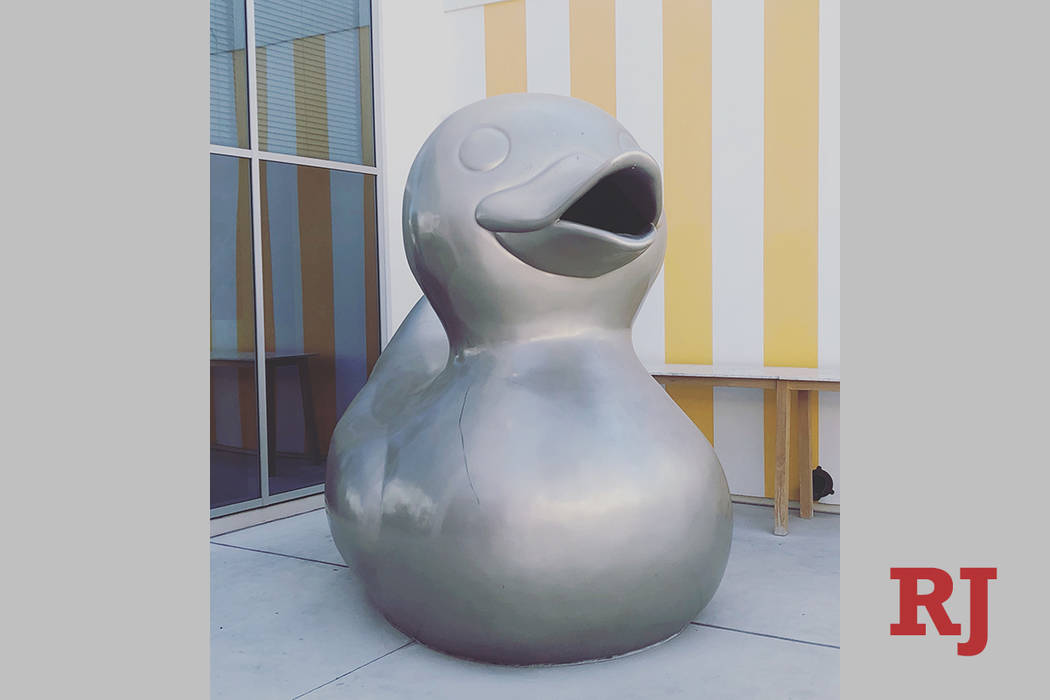 The 12-foot-tall Philippe Starck-designed metal duck is shown at the Sahara Las Vegas on Thursday, Aug. 29, 2019. The piece is headed for Reno as the pool is renovated. (John Katsilometes/Las Vegas Review-Journal). @johnnyKats 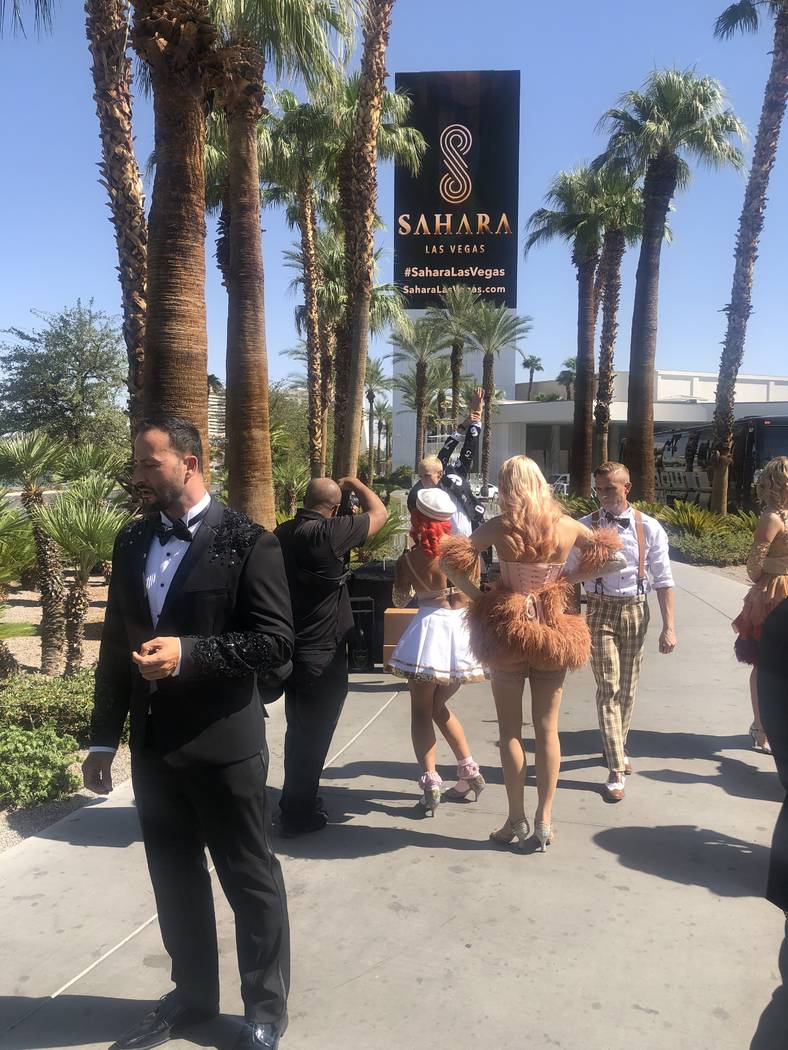 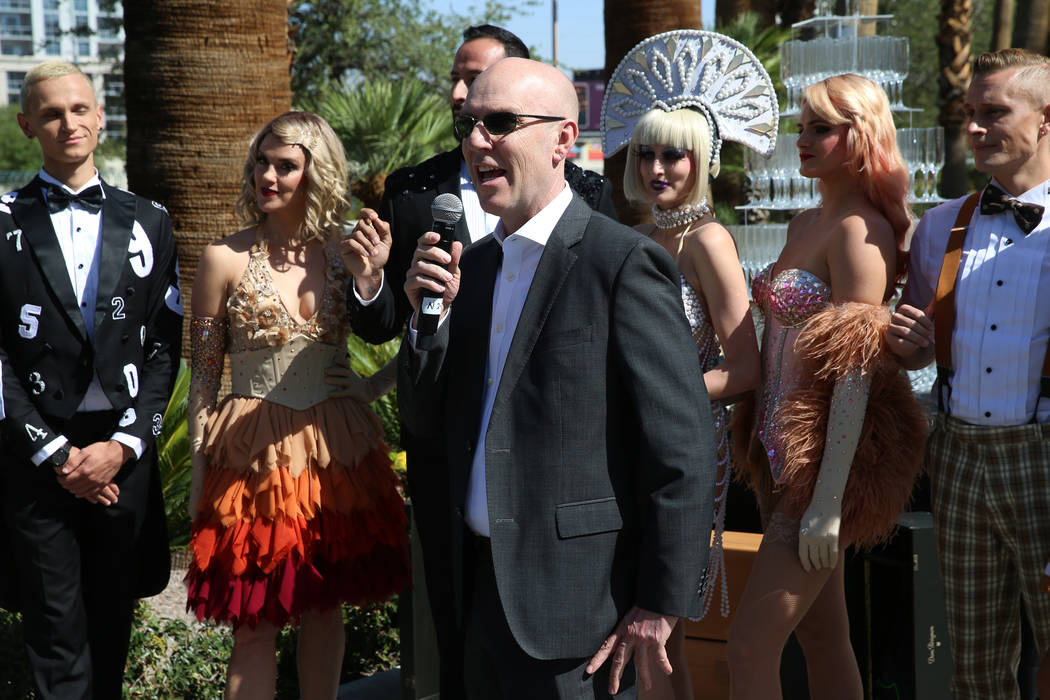 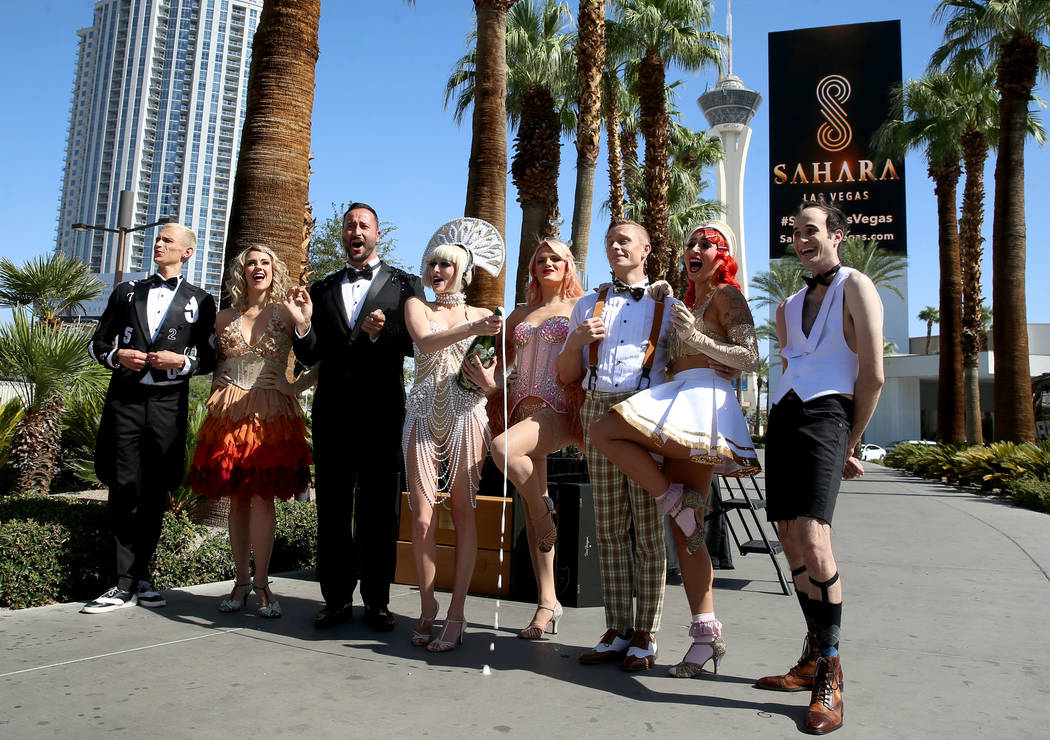 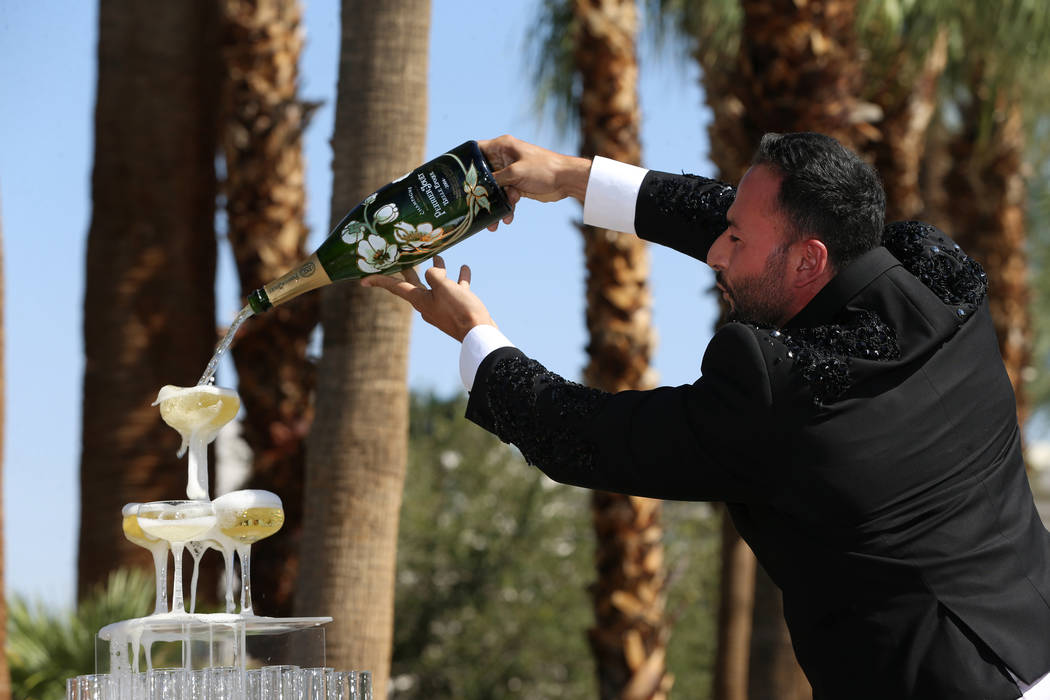 Paul Hobson answered a question about an art piece at Sahara Las Vegas with a query of his own:

“Didn’t you start a campaign to save it?”

We’re speaking of the 12-foot-tall Philippe Starck-designed metal duck at the Sahara pool. The fate of that silver ducky has been brought into question as Sahara has official turned over from SLS Las Vegas.

But Hobson is not about to serve up an order of Crushed Duck. The piece can be easily transported because it is styrofoam-filled and glued to the deck, unlike the Starck statue, which was built on-site with a steel frame inside.

“The duck is going to be well taken care of,” Hobson said Thursday morning after the cast of “Blanc de Blanc” took to the Strip and toasted the formal return to the Sahara name. “We aren’t savages. It won’t be part of the new pool. What we’d like to do is find a home for it in the Meruelo Group property in Reno, where they have a giant pool.

“We’re evaluating our options, but what I can say is, follow the duck.”

Former owner Sam Nazarian, who commissioned the piece, once said, “So we build a 12-foot duck, and literally it is probably the most photographed duck in the world.” Donald might debate that, but those interested in the preservation of art in all of its forms can likely see this duck at the pond at Grand Sierra Resort’s Grand Pool next summer.

The Sahara’s pool is undergoing a major upgrade as pool season closes in September. Owner Alex Meruelo has been inspired nostalgically, as hanging in his office is the famous photo of Johnny Carson at the pool, wearing a hard hat and holding a shovel, during one of his headlining appearances in the 1960s.

Around the hotel, the terrific Mediterranean restaurant Cleo is a goner, as that restaurant was operated by SBE Entertainment (the former SLS Las Vegas ownership group). Bella Bistro, a pop-up cafe, is moving in later this year. Jose Andres will remain a formidable presented on-property with Bazaar Meat. A Starbucks outpost is planned for the space across from Perq coffee bar, with Elevated, a grab-and-go eatery (think paninis, charcuterie, antipasto options) moving in this fall.

The Sahara is already rolling with Meruelo’s hand-picked production show, “Blanc de Blanc.” The “Magic Mike Live” male revue, at the center of ongoing speculation on the Las Vegas entertainment scene, is still not confirmed for the hotel.

“All I can say for the record is we are continuing our conversations with them,” Hobson said.

The Sahara re-brand is both a tribute to the hotel’s history, and a step beyond the SLS era. There is no return to a Moroccan, desert theme, with the hotel’s chic-modern design, but there will be hints to the past.

“You might see some camels in artwork around the property, but nothing in terms of a theme,” Hobson said. “There will be reference to the original Sahara era that reflects what we want for the modern era. There’s some nostalgia, but we are defining it for today.”