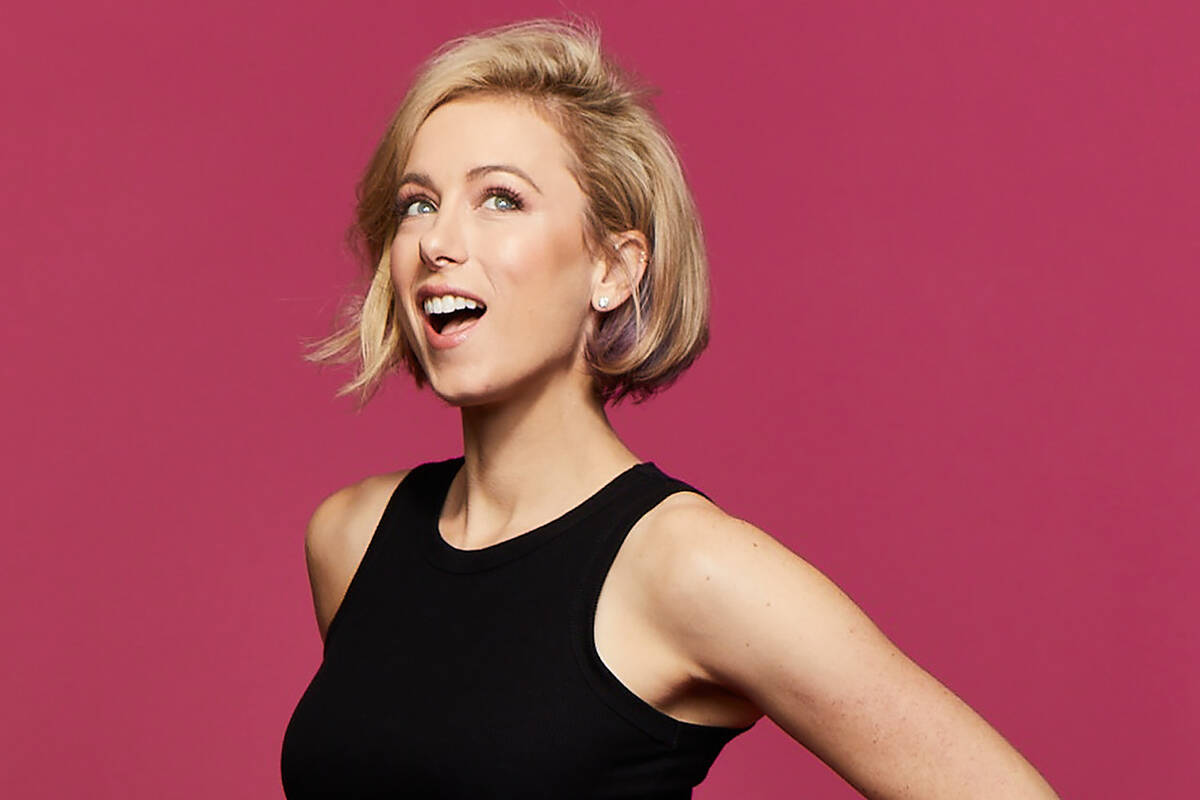 Iliza Shlesinger is back in the headlining series "Aces of Comedy" at Mirage Theater. (Christopher Patey) 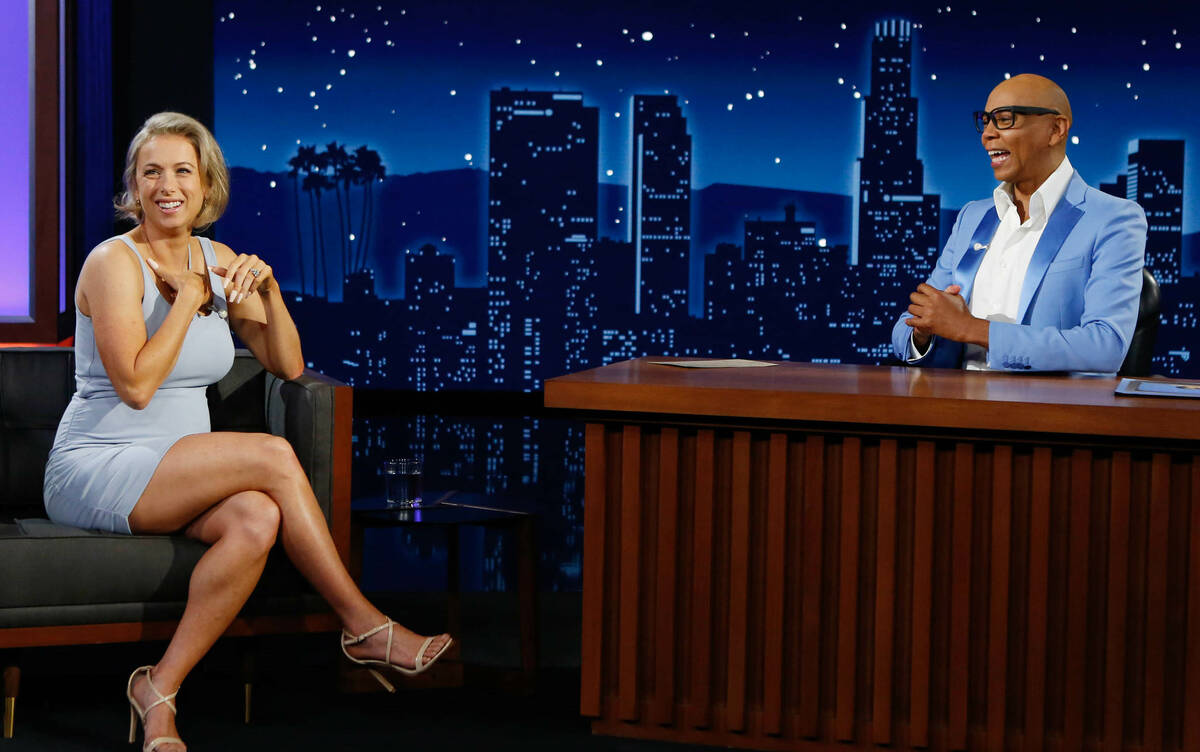 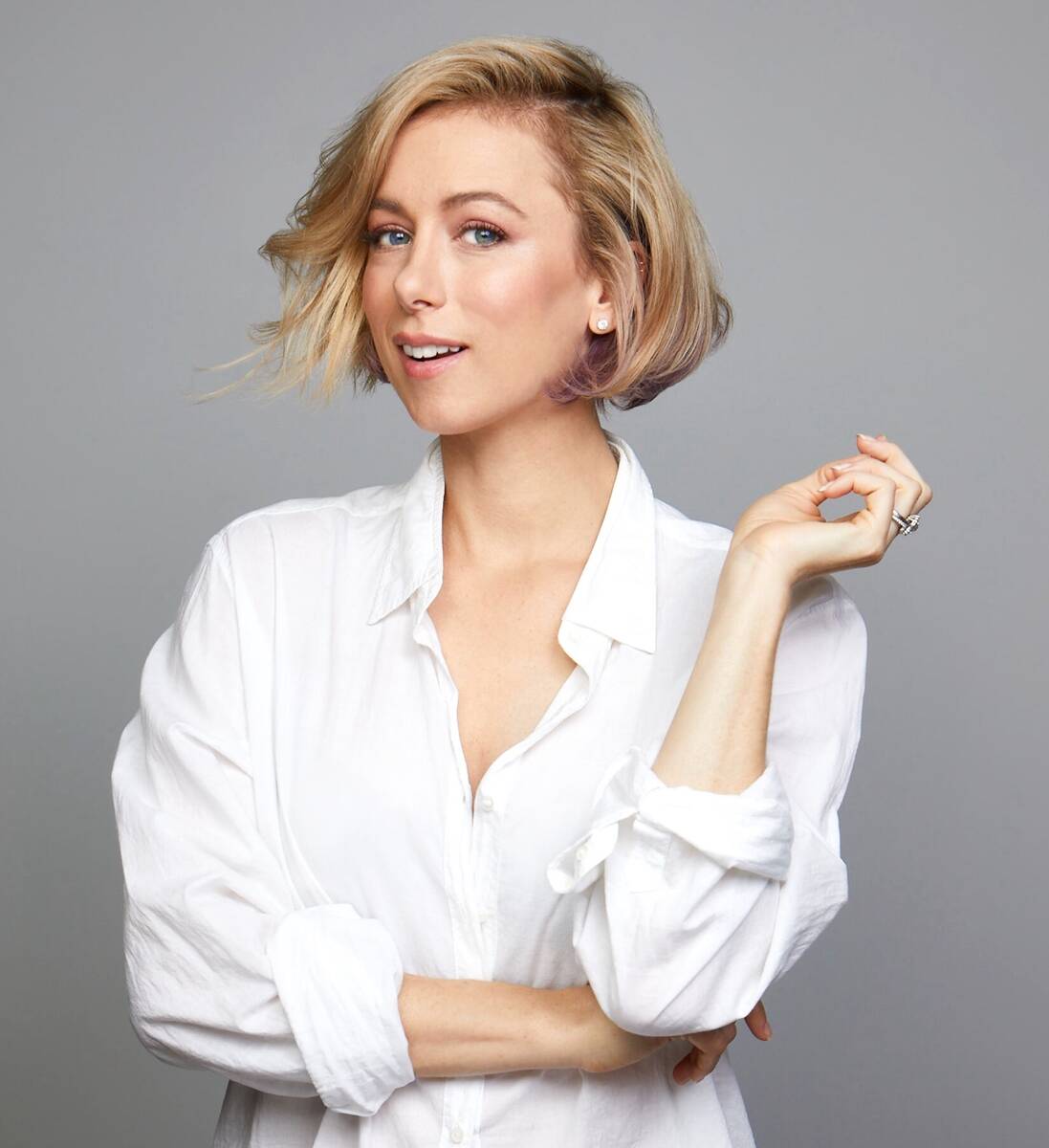 Iliza Shlesinger headlines Friday and Saturday at Mirage Theater in the Aces of Comedy series. (The DDA Group) 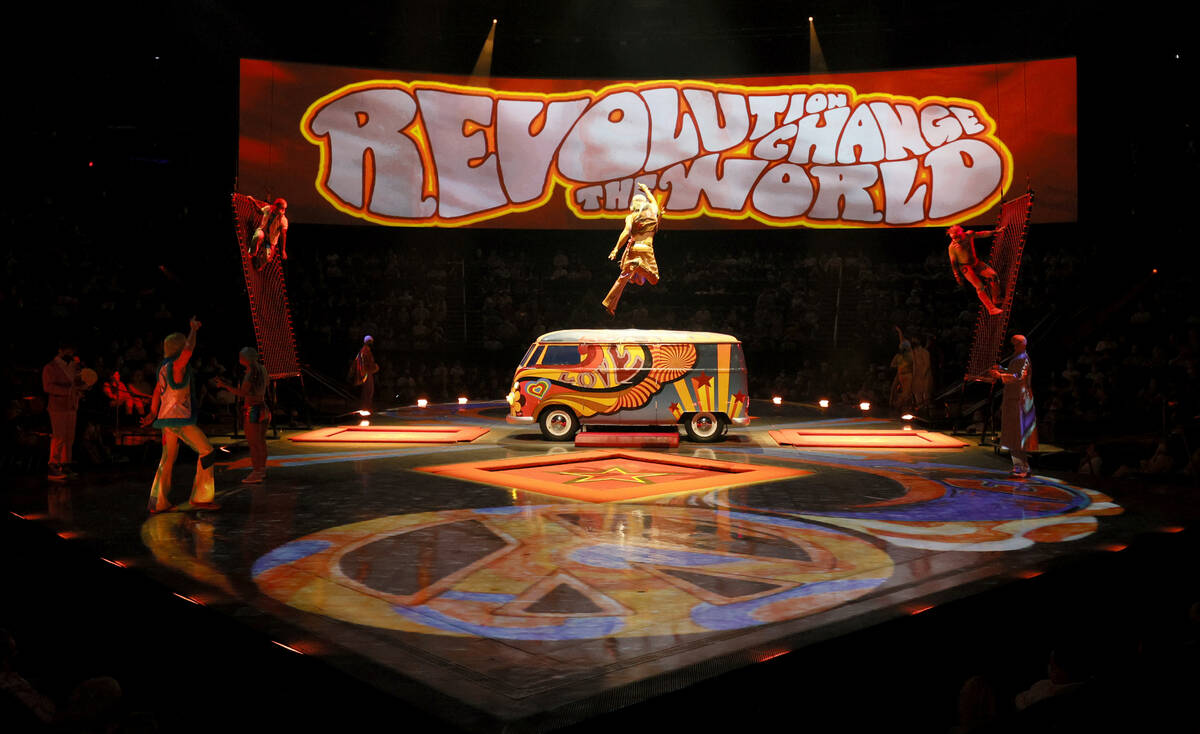 Cast members perform during the grand reopening of "The Beatles LOVE By Cirque du Soleil" at The Mirage Hotel & Casino on August 26, 2021, in Las Vegas, Nevada. (Ethan Miller/Getty Images for Cirque du Soleil) 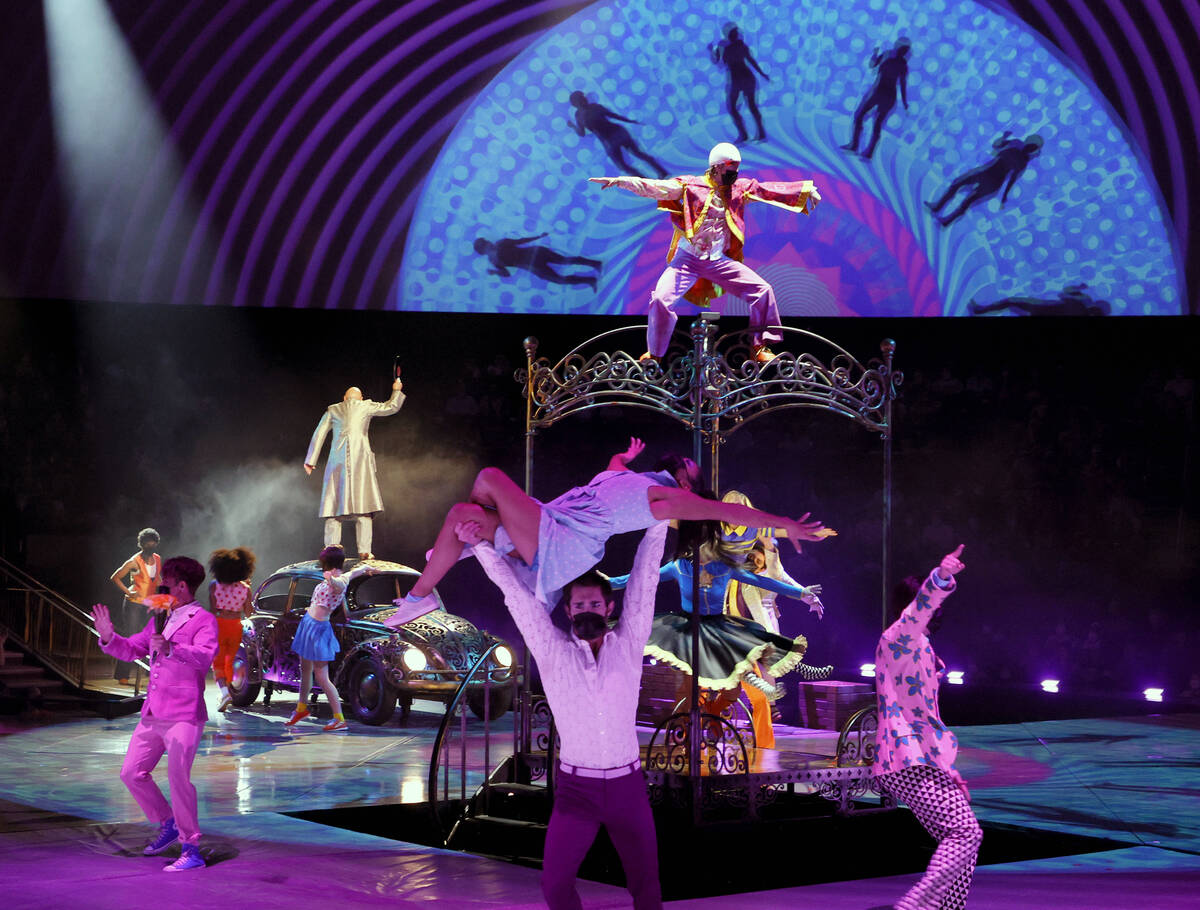 Cast members perform during the grand reopening of "The Beatles LOVE By Cirque du Soleil" at The Mirage Hotel & Casino on August 26, 2021 in Las Vegas, Nevada. (Ethan Miller/Getty Images for Cirque du Soleil) 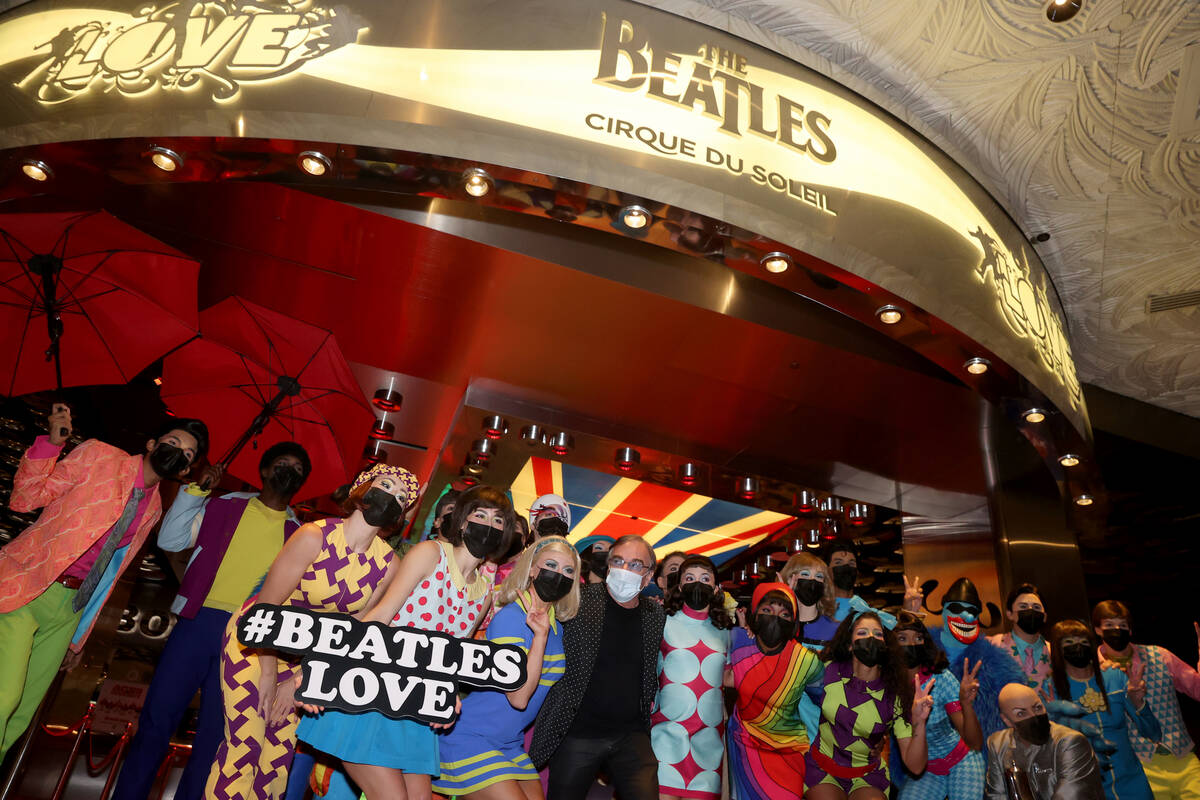 The cast of The Beatles LOVE entertain guests, employees, and fans during a celebratory pop-up performance at The Mirage in Las Vegas Wednesday, Aug. 25, 2021, to commemorate the grand reopening of the Cirque du Soleil show. (K.M. Cannon/Las Vegas Review-Journal) @KMCannonPhoto

For Iliza Shlesinger, the gifts she receives from fans have evolved. That makes sense, because so has her life.

Shlesinger and her husband, the expert chef Noah Galuten, have a baby daughter named Sierra Mae. Shlesinger also has a new pooch, a skittish rescue named Tian Fu who was found in the back of a meat truck in China.

Shlesinger’s devotees have long presented the star comics with presents at meet-and-greets after her shows. The family shares the wealth.

“Now it’s a lot about my dog, because she’s this whimsical thing,” says Shlesinger, headlining in Aces of Comedy at Mirage Theater at 10 p.m. Friday and Saturday. “We have ugly bras and full loaded armadillos, all kinds of creatures. And now it’s gifts to me and Noah, and also Sierra. Somebody even gave Sierra’s baby-nurse a gift.”

She emphasizes: “I have nothing but the most thoughtful fans.”

Shlesinger this week issued her second book “All Things Aside,” and heads up her sixth Netflix stand-up special “Hot Forever” which premiered Tuesday. During the COVID lockdown, Shlesinger and Galuten created “Don’t Panic Pantry,” a cooking series for Netflix. Galuten is a James Beard Award-nominated chef and author.

Shlesinger’s podcast, “AIA: Ask Iliza Anything” helped set the tone for her essay-driven book. Shlesinger revealed during a broadcast she’d suffered a miscarriage in 2021. The book follows that tenor. While Shlesinger employs her edgy humor in many spots, “All Things Aside” is beyond a joke-telling. The work is also a stark examination of such series subjects as health-care and human interaction.

“I have access to, quote unquote, excellent health care. I’m of a certain tax bracket and I’m white and I still got this,” she writes. “So can you imagine how awful this is in mass for the bulk of women?”

Shlesinger says she is distributing these thoughts “just through my lens, on a range of topics.”

“I’m talking about all the things in our lives that are scams; nostalgia, which is super-huge in my generation; to my miscarriage; to the first boy you ever fall in love with,” the 39-year-old Shlesinger says. “I even have a fake court transcript, where I take myself to court, asking myself, ‘Am I an annoying person?’”

The author offres suggestions for those who are interested in the new book.

Just don’t give her one. She’s covered.

Future of the Mirage

The Secret Garden & Dolphin Habitat has no firm reopening date (previously, the hotel had posted and informed the public of plans to reopen Oct. 22, which is not the case). The popular attraction co-founded by Siegfried & Roy shut down Sept. 24, after the death of the bottlenose dolphin K2. No plans have been made public for how to deal with the animals if and when the attraction closes as Hard Rock Hotel takes over the property. But the animals’ health is a top priority for both companies.

“We and Hard Rock are on the same page in terms of focusing on the well-being of the animals,” MGM Resorts International spokesman Brian Ahern said in a statement. “We’ll continue working with them to keep the animals healthy safe and comfortable following the closing as well. Any future decisions will be based on what’s best for the animals.”

The reference to closing refers to the transaction closing for the purchase of the Mirage property.

Addressing questions about the Beatles/Cirque show “Love” and activity at Mirage Theater (including Aces and magician headliner Shin Lim), a Hard Rock International spokeswoman said, “‘Love’ is a wonderful show within the many world-class entertainment productions Cirque offers globally.”

Otherwise, the company is holding comment as the Gaming Control Board runs its licensing process in the sale.

This might be the most combustible moment at Paris Theater since “Inferno” hauled out.

Lunchbox, the affable co-host on the “The Bobby Bones Show,” appeared in both “Bat Out of Hell — The Musical” performances Saturday night. The sidekick (legal name of Dan Chappell) was presented the opportunity after he failed an audition for a Hallmark movie. He’d been bemoaning that event on the air.

Importantly, Tanesa Medlin of the promotions agency Mixed Media Entertainment was following the Lunchbox travails. Medlin quickly contacted the show to see if Lunchbox would be interested in taking a shot at “Bat Out of Hell” in Vegas.

Swiftly, Bones himself informed his on-air companion that director Jay Scheib would be interviewing him for an ensemble role. Lunchbox won the spot (shockingly), and performed an unbilled role of a member of The Lost, riding a motorcycle at the start of the production.

At the end of the second performance, the cast shouted “Mister Box! Mister Box!” as the burgeoning thespian exited the stage.

Tony buzz? Maybe. But certainly an artistic success wrapped in a publicity stunt.This coverage, coupled with the upcoming visit by a shaman to rid the theater of its evil spirits, should help make “Bat” a hit.

The terrific twin tap tandem of Sean and John Scott of “Absinthe” posted a video on their IG feed of a dog wearing customized (natch) tap shoes. These are the same types of booties pet parents give to dogs for walks on very hot days. Except, with taps on the bottom.

The dog, which seems at least part-Chihuahua, then scrambles around, tapping to great rhythm.

“Music to my ears,” Sean Scott posted. “He might have me beat.” But does he have a twin? If so, the Gazillionaire will be in pursuit.

Maxan Jazz Sushi & Jazz (so serious about jazz, the term is twice in the title) welcomes Jason Corpuz Trio, with Nick Schmitt and Jeremy Klewicki. The trio are all former members of The Lique, so there’s your artistic cred. Corpuz is on keys, Schmitt on bass, Klewicki on drums. The special guest is the wildly talented vocalist and trumpet master Max Von Roderick. Show time is 7 p.m.-10 p.m.; go to maxanjazz.com or call 702.485.3926 for info.