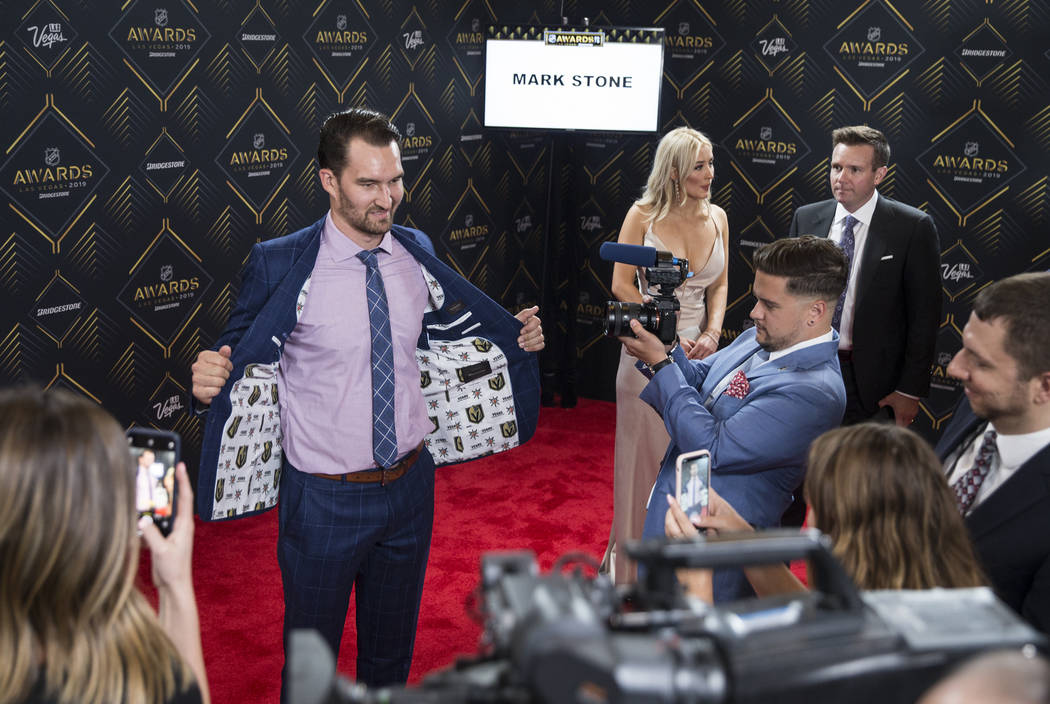 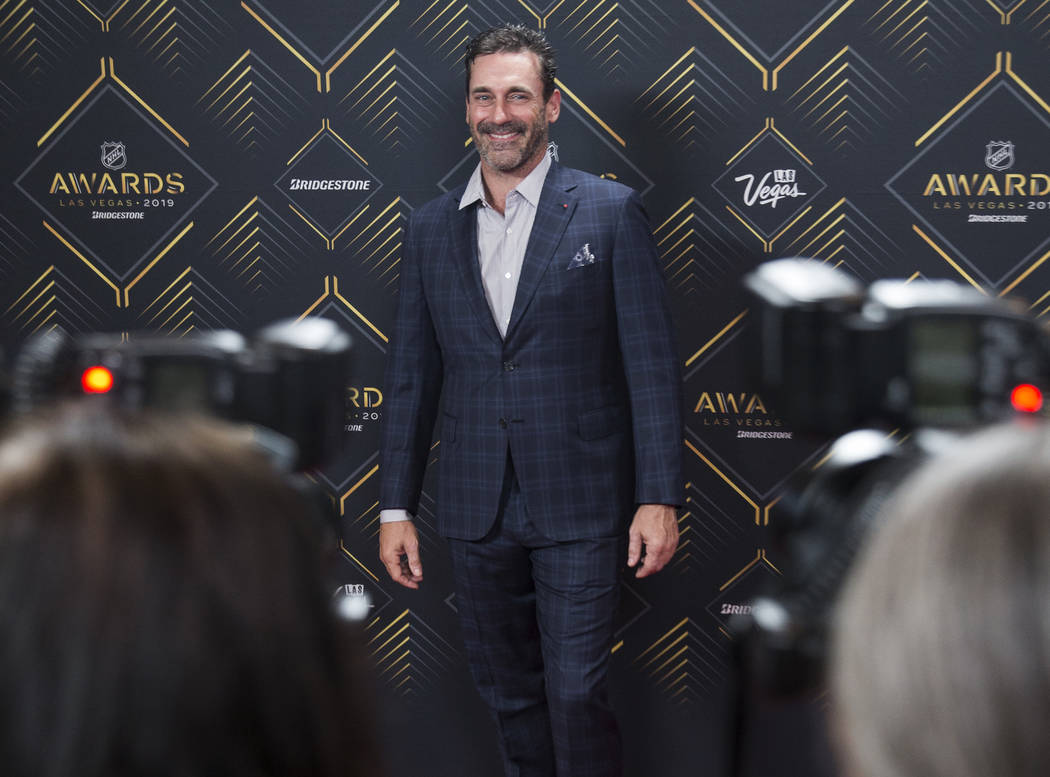 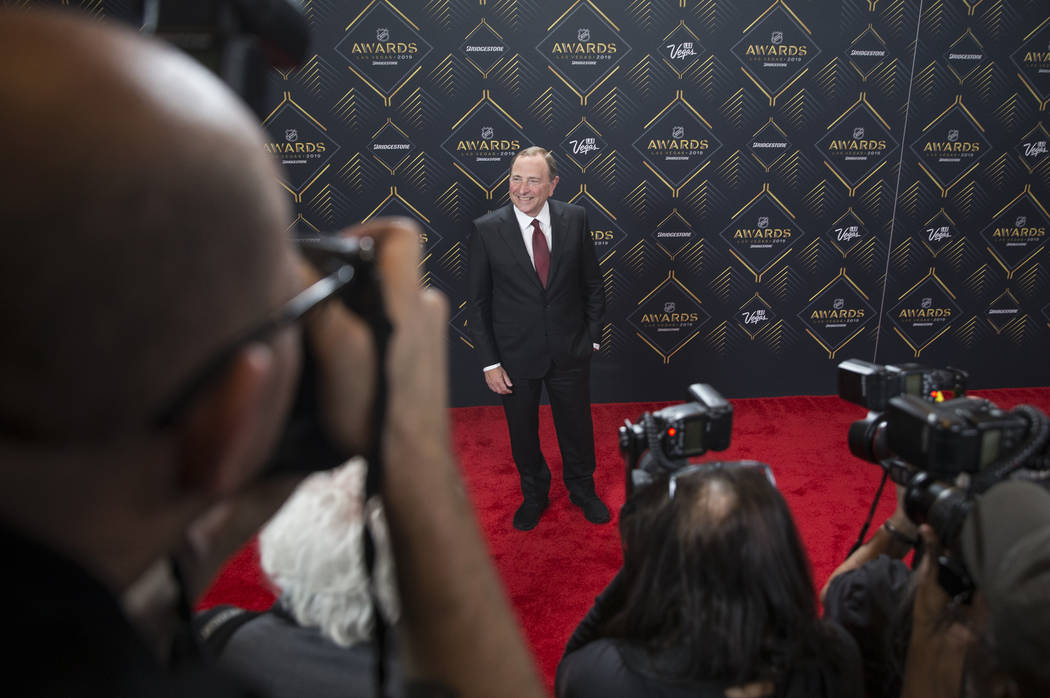 The Kats! Bureau at this writing its the 2019 NHL Awards show media center at Mandalay Bay Events Center, just after red carpet duty, where I was able to ask Mark Stone of the Golden Knights, “Can you fan that?”

Speaking of his suit jacket, of course. The lining was laden with Golden Knights logos.

More from the red-carpet scene, and elsewhere:

“I think the future is bright for the Coyotes in Arizona, because of Alex’s commitment to making things work well, to securing a proper home for the Coyotes in the greater Phoenix area,” Bettman said on the red carpet. “He has the expertise in turning businesses around, and the resources to make it happen. We are excited to have him in the league.”

“Clearly, if you can be licensed to own a casino operation in Nevada, you’re OK,” Bettman said. “He has two operations, one here and one in Reno. We checked him out thoroughly, and we couldn’t be more pleased to have him joining us.”

No club for Hamm

St. Louis Blues devotee Jon Hamm, who has just finished filming “Top Gun: Maverick” with Tom Cruise, said his team’s Stanley Cup Final victory has been a “nonstop ride.” Hamm grew up in St. Louis and has been dubbed a “Superfan” of the Blues.

But he missed the team’s party weekend at Omnia Nightclub at Caesars Palace on Saturday night and at Wet Republic at MGM Grand on Sunday afternoon.

Hamm said working with Cruise was “amazing,” and that the “Top Gun” film forced him to groom for his role as a navy admiral.

“That movie was the reason I had to shave, actually, and I took a lot of heat about that on social media, but I had to because admirals in the Navy don’t have beards,” he said. “It comes out in 2020, in the summer. I think people will be pretty stoked. I know I am, to see it.”

“Jeopardy!” James Holzhauer has formally turned down Crazy Horse 3’s offer to host a victory party as he has ended his lucrative run on the syndicated game show.

But hey, he had some fun with being invited.

“A couple things went through my mind. First was they’re going to get some free publicity when I make fun of them on social media, and second is that the ‘Jeopardy!’ demographic base skews to kind of older, more conservative people, and they’re going to have some comments,” Holzhauer said. “And, they certainly did on the comments section of Facebook. ‘No! James! Think of your family!’ “

Holzhauer emphasized, “I have no plans to take them up on their offer.”

On May 8, The Horse had offered to host a formal victory party. Holzhauer actually posted a screen-grab of an invitation from a Crazy Horse 3 rep, which read, “I’m reaching out on behalf of Crazy Horse 3 in Las Vegas — we would love to have your celebratory victory party at the award-winning gentleman’s club once you’ve finished your successful Jeopardy run.” A red carpet walk and bottle service was involved.

His lifestyle, naturally, has changed. “Having to devote some time to all all the media requests, I guess is No. 1 and a big change is meeting charities to give them a little money to reach their goals,” he said, adding that his gambling career is sure to be curtailed.

“It’s kind of a slow season for work anyway, only baseball going right now,” he said. “Plan A is still to go back when football season starts, and throw myself back into it. But some (charities) might require me to stop gambling on sports as part of the agreement. I would have to make tough decisions about what to give and take.”

After showing off the team’s logo in his jacket lining Golden Knight Stone noted his adjusted footwear.

“Yeah, I’m wearing sockless shoes, for the first time in my life,” he said, glancing at his feet. “We didn’t have that option in Canada, with snow on the ground during most of the season. Coming to Vegas, I’ve adjusted to the ins and outs.”

Thompson has spent 16 years on “SNL,” and is also starring in a new NBC sitcom, “The Kenan Show,” with shooting scheduled in the next couple of months. He’s producing the “All That” reboot on Nickelodeon and is also a celebrity judge on the NBC comedy-competition show, “Bring the Funny.”

I asked Thompson about the busy comedy scene in Las Vegas, highlighted by traditionally formatted clubs operated by such big names from network TV, Brad Garrett and Jimmy Kimmel.

“You have to go where the people are, and they are in Las Vegas and some of them want to laugh,” Thompson said. “They want to go to a comedy club for a bunch of laughs. In New York we have the Comedy Cellar. In L.A., same thing with the clubs there. I’m glad their doing it in Las Vegas.

Thompson has signed for a record 17th season on “SNL.” “I’m going to stay as long as I can.”

Two factoids about Miss Universe Catriona Gray of the Philippines: She rode the Manhattan Express at New York-New York the first time she visited Vegas, at age 11 or 12, and never watched hockey live until a month ago in New York.

“I am learning about hockey,” she said. “Most of my countrymen have never seen snow.”

Miss USA Cheslie Kryst is from Charlotte, North Carolina, and is a big Carolina Hurricanes fan. “We didn’t make it to the Finals, but we have a lot of great seasons ahead of us.”