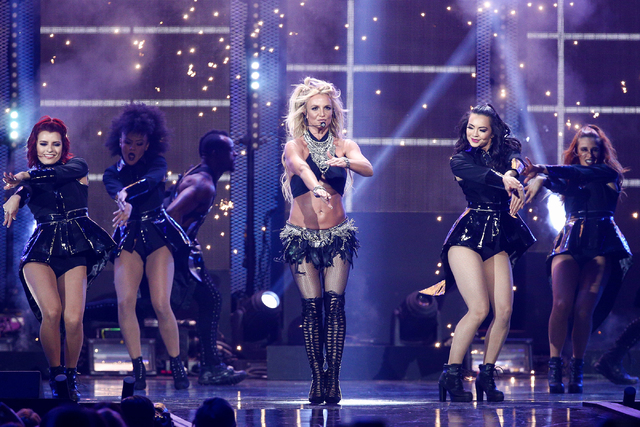 Britney Spears is ending her “Piece of Me” residency at Axis theater at Planet Hollywood on Dec. 31, as her contract with Caesars Entertainment expires, her Las Vegas manager Larry Rudolph said today.

Rudolph said her next venue “could be conceivably anywhere, we could have it at the needle on the top of the Stratosphere, and do the bungee jump afterward.”

That does stretch the meaning of “conceivably anywhere.” Mirth aside, it is clear now that Spears’ will not continue “Piece of Me” in an unbroken run through 2018. She is currently preparing for a summer tour of Asie and Tel Aviv, Israel.

“We are done with this show, and our next move is undecided,” Rudolph said Friday. “We are still talking with Caesars Entertainment and other interested parties in Las Vegas.”

But that does not mean Brit is finished in Vegas. I asked Rudolph about other venues similar in size and staging to Axis — including The Colosseum at Caesars Palace, Park Theater and The Joint at the Hard Rock Hotel. All are in play.

“Anything is possible. We have made zero decisions,” he said. “We expect a lot of interest from all parties. Britney basically sells out every show, and she loves Las Vegas, she loves performing in Vegas, and Vegas is a possibility going forward.”

Rudolph has said Spears might well take a break next spring and return to the stage after a layoff. “She might tour, she might work on a new album,” he said. “It’s too early to talk specifics about anything.” Spears closes her current run Saturday night, returning May 3-May 20. As Rudolph reminds, tickets for those shows will be especially coveted, given today’s announcement.

John Katsilometes’ column runs daily in the A section, and Fridays in Neon. He also hosts “Kats! On The Radio” Wednesdays at8 p.m. on KUNV 91.5-FM and appears Wednesdays at 11 a.m. with Dayna Roselli on KTNV Channel 13. Contact him at jkatsilometes@reviewjournal.com. Follow @johnnykats on Twitter, @JohnnyKats1 on Instagram.