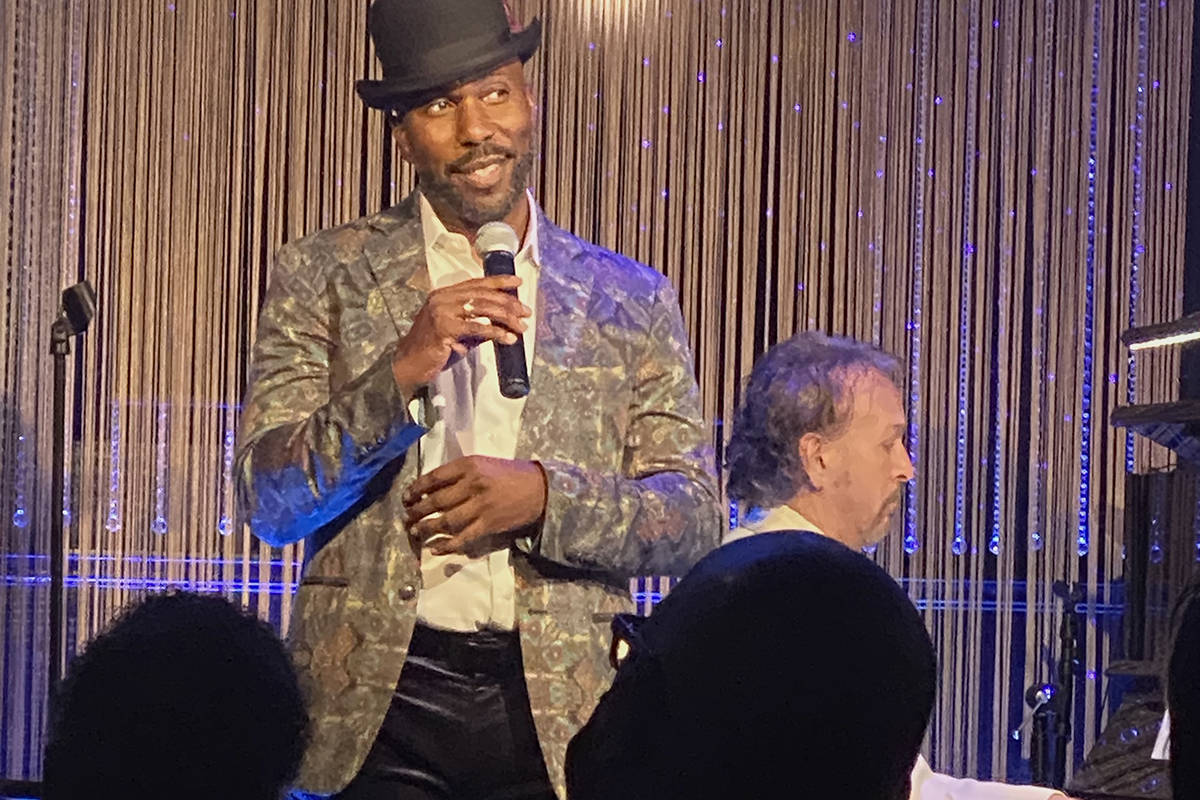 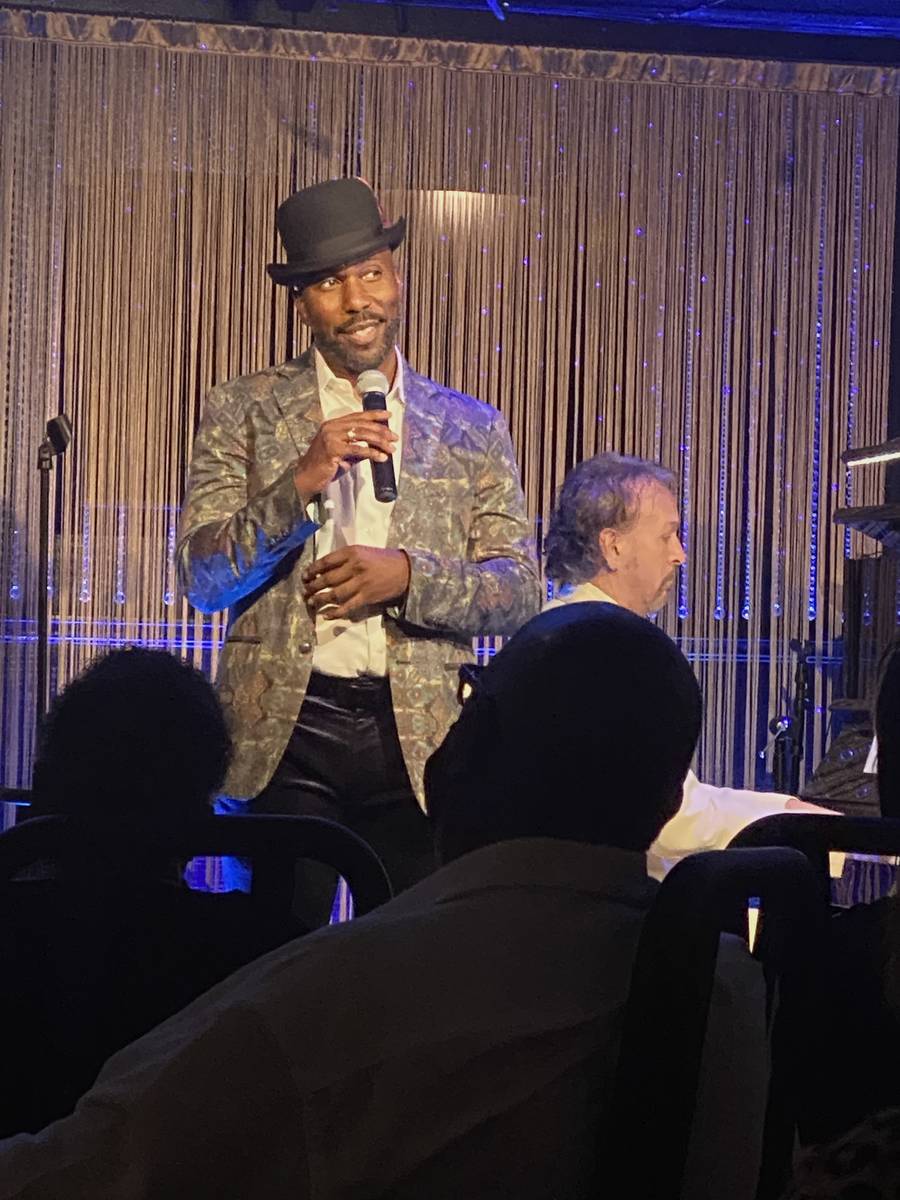 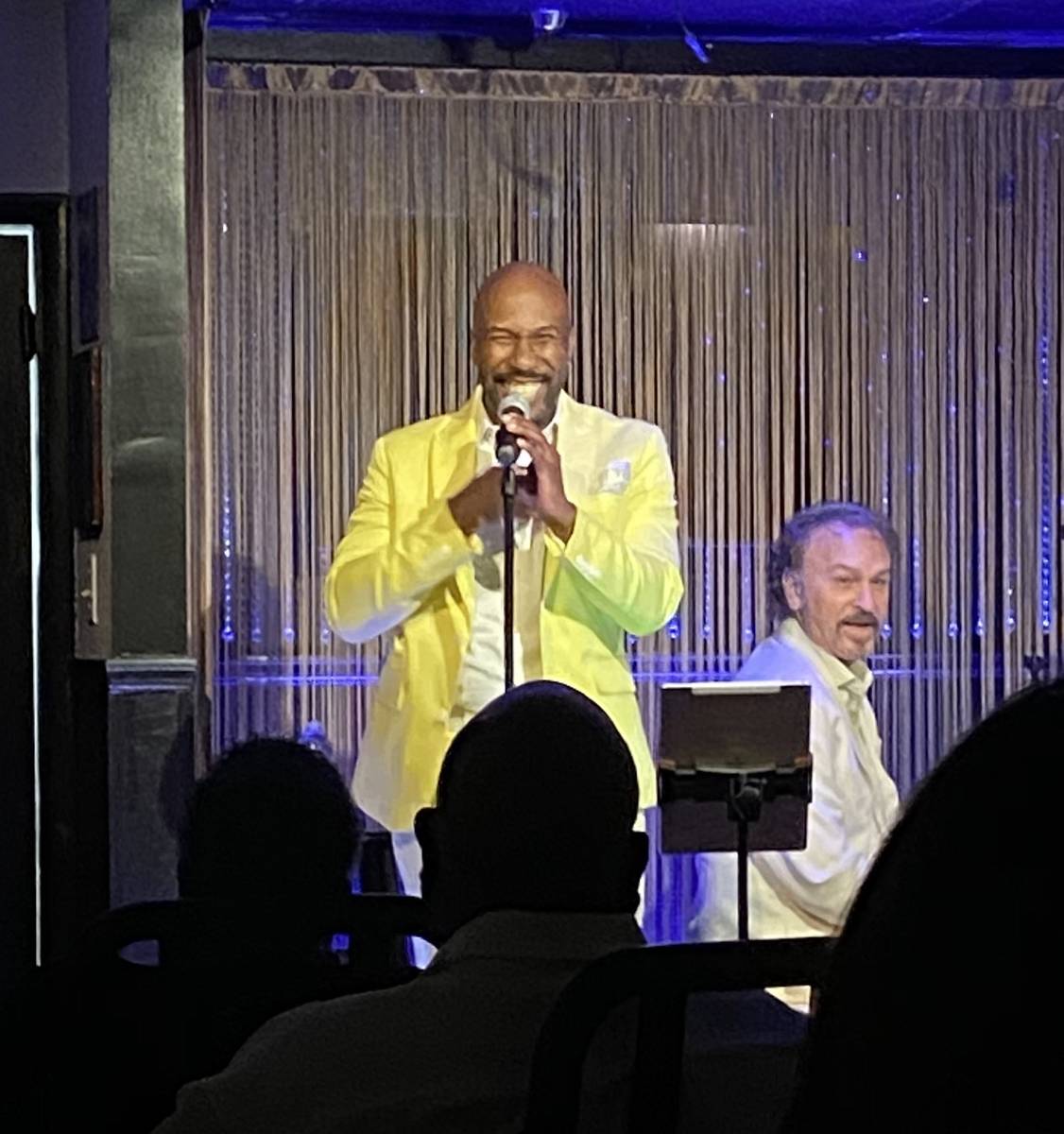 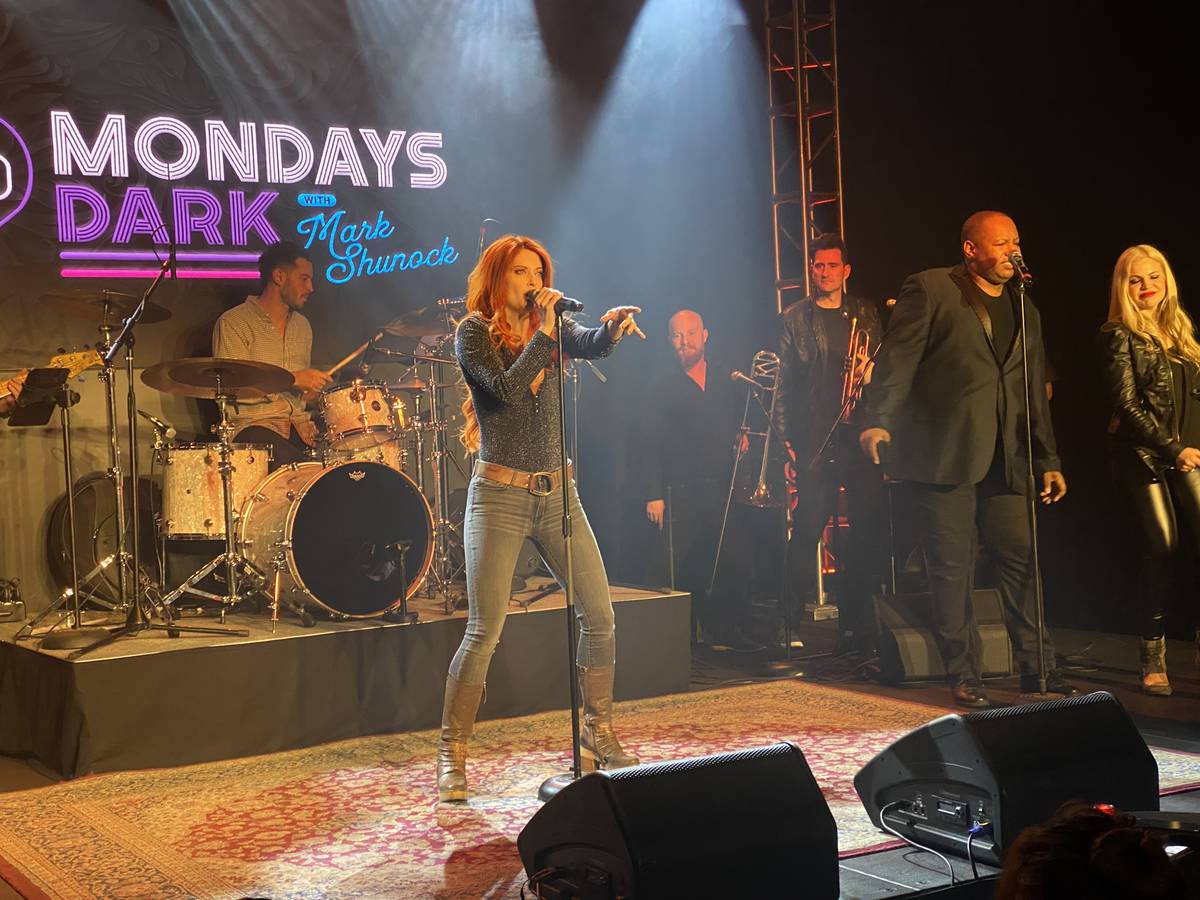 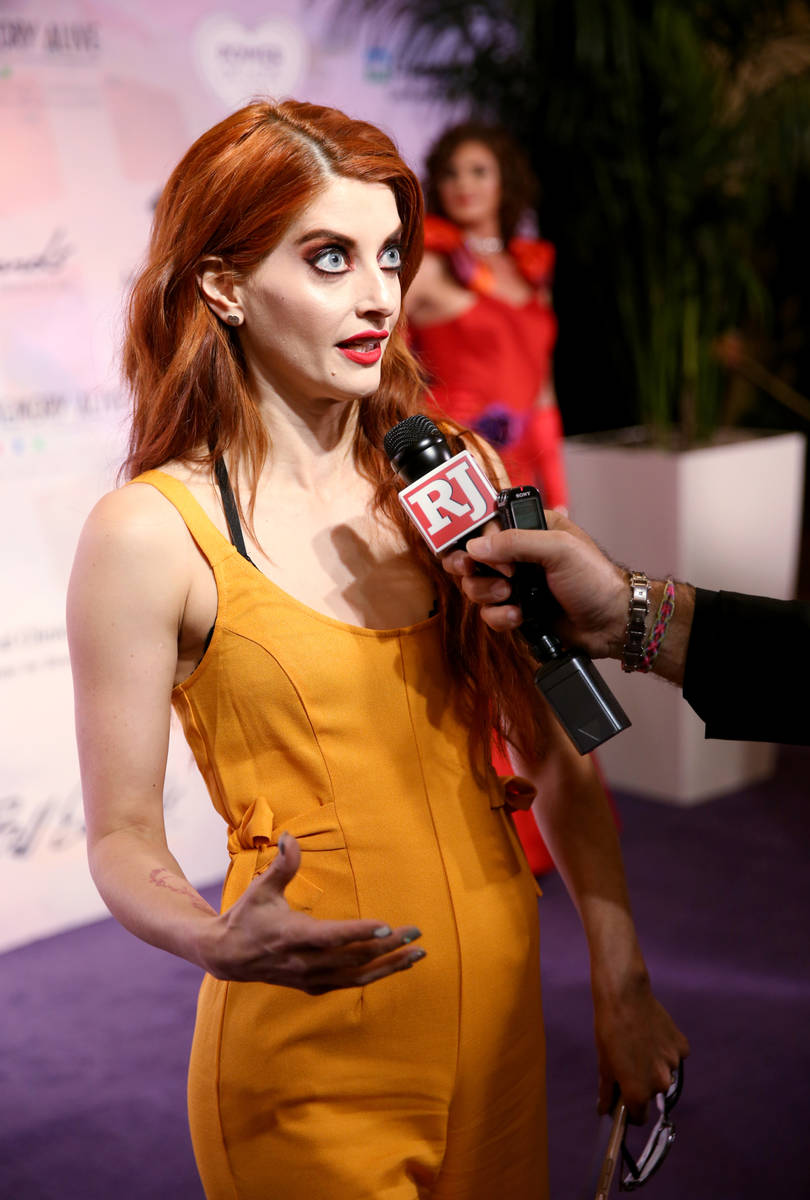 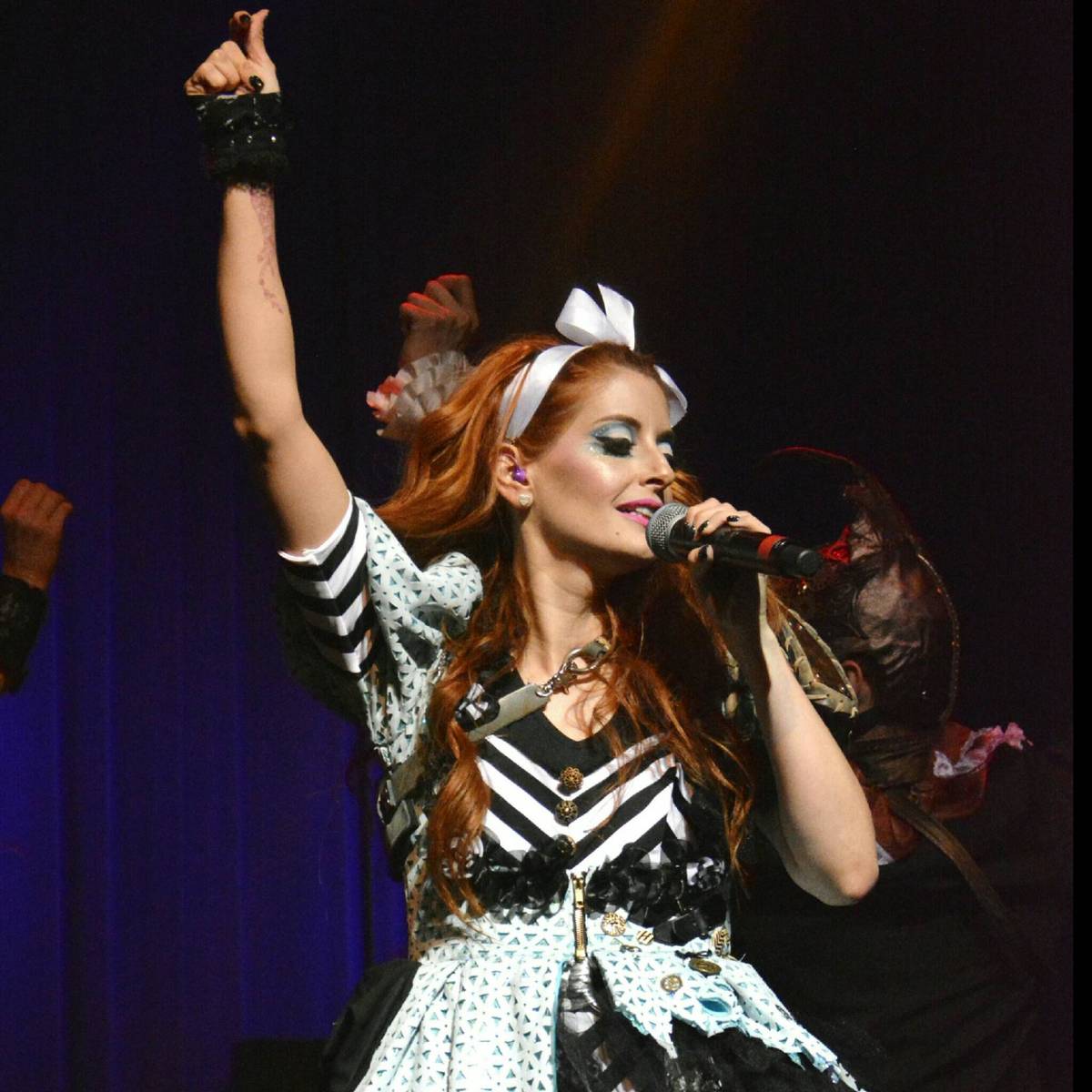 We have run into an assortment of characters over the years at the Commercial Center of Las Vegas. But never Mr. Bojangles.

That changed over the weekend at The Vegas Room, where Eric Jordan Young and Philip Fortenberry performed a spirited cabaret show for a couple of dozen dinner diners.

The shows on Friday and Saturday nights were akin to a parlor hang of friends and family. It was such a throwback vibe it could have played out in black and white, except for Young’s lemon-yellow suit.

It worked for this crowd, which included Young’s parents, Alice and Sam; fantastic Vegas headliner Earl Turner; the ever-amazing Janien Valentine and wonderful vocalist Amanda King, who co-headlined the brunch show with Patrick Hogan on Sunday.

The Vegas Room is designed for locals, or locals who bring along a lucky out-of-towner. It’s not a place featured in an LVCVA commercial blitz. It’s not so easy to find, even for longtime Vegas residents: Drive into the Commercial Center, veer right, past Lotus of Siam, head toward New Orleans Square and the now-closed Las Vegas Lounge, and find the now-closed Korean restaurant space with the red door at the entrance.

If you arrive at The Green Door, you are way off. Throw it into reverse!

The Vegas Room had barely launched when COVID arrived to shut down the show. The venue is under the stewardship of executive chef David James Robinson, president Tom Michel, GM Sean Stephenson and director of entertainment Brent Barrett. You can arrive at 6:30 p.m. for a full, three-course dinner or 7:30 p.m. for light bites (hit thevegasroom.com for reservations and info).

The dinner courses (including beef stroganoff and vegan options) are served before and after the show, but not during. Drinks are at the bar. It’s a Manhattan-style, duck-in place certain to draw a discriminate crowd. And you have to be great to play this room. The talent booked by Barrett, a onetime Phantom in “Phantom — The Las Vegas Spectacular,” is among the city’s best.

Young has appeared in “Starlight Express” at the Las Vegas Hilton, “Vegas! The Show” at Saxe Theater, “Rock of Ages” at the Venetian and in “The Cocktail Cabaret” at Cleopatra’s Barge at Caesars Palace.

King and Hogan are the rotating brunch headliners, together and Hogan solo, through July. Valentine is working on dates in late-August.

In his weekend premiere at the room, Young sampled Burt Bacharach, Barry Manilow and Sammy Davis Jr. in two sets split by an intermission. Young is especially built to perform “Mr. Bojangles,” having toured in a Davis tribute show, and also showcased a in a blazing one-man show, “Shakin’” at Planet Hollywood.

Young and Fortenberry filled this space with warm songs and good energy. As the front man said at the end, “I’m so appreciative. It’s great to see human beings again.” He heard them, too. A standing O, one of many in this burgeoning Cool Hang.

The Thunder From Down Under pay-per-view, live stream from The Space on Saturday night was the proverbial round-tripper.

“It was a home run!” SPI Entertainment CEO Adam Steck reports, after the first such “closed” show for a male revue in Vegas. The full-bodied production played to an empty room, but was a hit online. This format could extend even past the show’s reopening at Thunderland Showroom at Excalibur.

Steck is hoping its scheduled July 15 return holds, but in any case is contemplating occasional PPV live streams from inside the venue. I’ve been saying throughout the COVID shutdown that online performances have become a viable option for some performers. I hadn’t anticipated male revues, exactly, but Thunder proves otherwise.

Returning to the subject of Martinez, she is finishing a song and accompanying video, “No Time To Die,” firing up a metal-anthem project with Jeff Tortora on drums, Jason Davis on guitar, David Warner on strings and Tom Nieves on bass. This ensemble had not worked together until this month. They killed it; look for the video to be released in a couple of weeks.

Martinez is also hosting the next “Late Night Magic” show at 9 p.m. (doors) and 10 p .m. (show) July 3 at Notoriety at Neonopolis. Headlining is our friend John Shaw, the famed side-act artist from Zak Bagans’ The Haunted Museum.

Shaw, rhymes with “saw,” is not for the meek. He handles the power drill the same way Jimi Hendrix wielded the Fender Stratocaster. This show has everything, aside from nuance.

I walked into the main entrance of Westgate Las Vegas on Monday afternoon after a long walk from self-parking. My temperature read just a little higher than 100 degrees.

So I was asked to stand to the side for a couple of minutes. We retested. I had dropped to 97. The staffer at the entrance said, “You are cured!” If it were only that simple.

Tip: Get all liquored up and shout, “Piano Man!” They love that … . But a real tip: Please tip. It’s protocol.