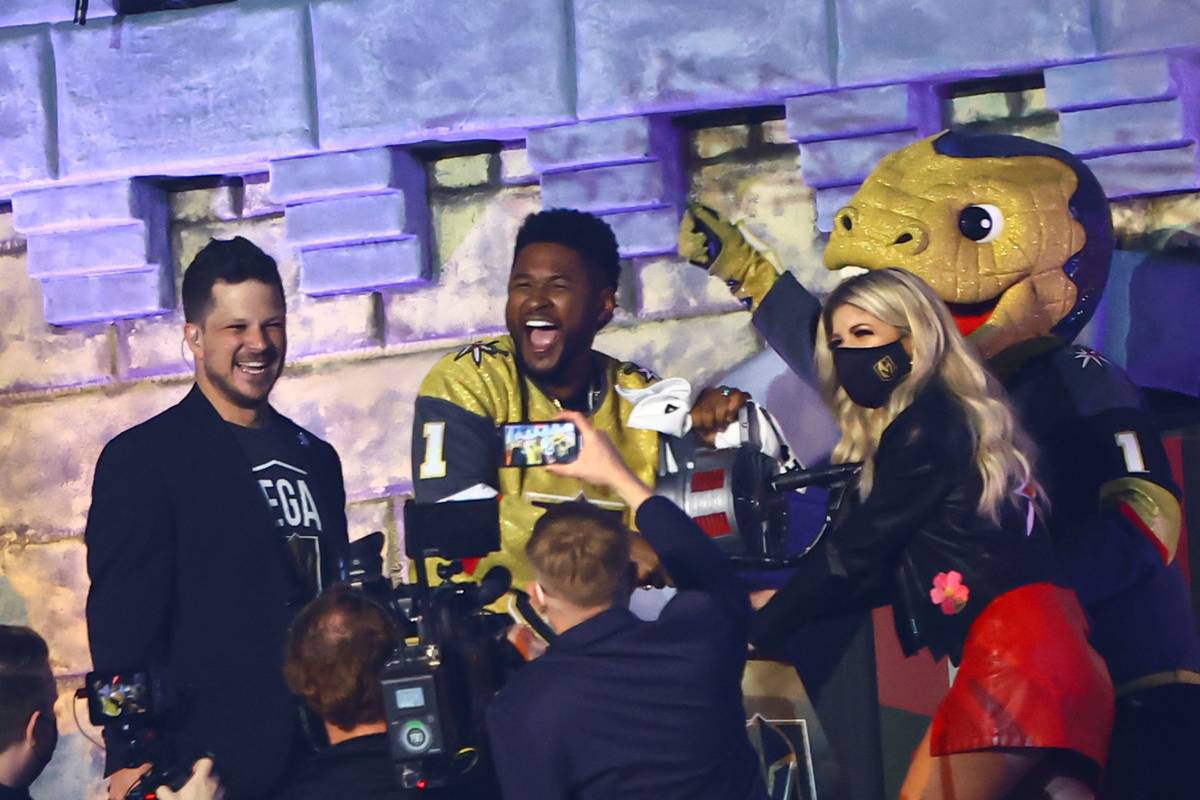 Usher cranks the siren to kick off the first period of Game 2 in an NHL hockey Stanley Cup semifinal playoff series between the Golden Knights and Montreal Canadiens at T-Mobile Arena in Las Vegas on Wednesday, June 16, 2021. (Chase Stevens/Las Vegas Review-Journal) @csstevensphoto

The Kats! Bureau at this writing is at The Perch at T-Mobile Arena, taking in the Vegas Golden Knights-Montreal Canadiens action (Knights lost, 3-2). We have seen Usher crank the siren. Not an usher, but rather the R&B superstar who has the UshBucks stuffed in his pockets.

Earlier, I heard a new Las Vegas resident headliner was turning the crank, so I texted Donny Osmond and asked, “Am I going to see you tonight at T-Mobile Arena?”

Not quite. But catch Usher at the Colosseum at Caesars Palace beginning July 16, Osmond at Harrah’s Showroom beginning Aug. 31, and yours truly at both.

Call it a VegasVille inevitability.

Las Vegas Raiders QB Derek Carr and Mr. Las Vegas Wayne Newton met during the Golden Knights- Canadiens game on Monday. It was Carr’s turn to turn the crank, and afterward met up with Newton in the crowd.

“I met Wayne Newton, which was crazy,” Carr was quoted on the Raiders’ official website. “Couldn’t believe it. But super nice guy. His wife, very nice. Wayne Newton, shout-out to you. It was nice to meet you.”

The shot of the two on Newton’s Instagram feed is all that. Great peripheral shout-out, too, to Kat Newton.

The Composers Showcase of Las Vegas returned to full capacity Tuesday night at Notoriety at Neonopolis. Probably 160 in the room, based on its sellout status and from my own hasty headcount (and if I touched your head, sorry). Keith Thompson and Clint Holmes co-hosted in what was very much a love fest with a superior sound track.

We heard again from Richard Oberacker, music director of “Ka” who along with writing partner Robert Taylor brought “Bandstand” to Broadway. Oberacker’s “Bruce,” centered on Steven Spielberg’s development of “Jaws,” is being rescheduled for the upcoming season at Seattle Repertory Theatre. It will then head to Paper Mill Playhouse in Millburn, N.J.

Oberacker has showcased much of “Bruce” at TCS, up until it was sidelined because of the pandemic. The composer has loaded a lot of content on his YouTube page, too. Tuesday he performed “Thank You Enough” from the musical.

As I said before everything went dark, keep an eye on this one, from start to fin-ish. Hah.

Santa Fe & The Fat City Horns powered through their first live performance in 15 months at the Copa Room at Bootlegger Bistro on Monday night. Tony Davich’s cover of Ray Charles’ “You Don’t Know Me” brought the chills, and I never imagined how much I’d miss a five-minute bass solo until Rochon Westmoreland turned one loose in the finale.

I also caught up with Vegas lounge legend Sidro Garcia, whose Sidro’s Armada band ruled the scene for decades in VegasVille. I last saw the act at Starlight Lounge at the Stardust in about 2001. Garcia celebrated his 80th birthday at the show, and dang he still looks like he can throw it down. Jerry Lopez introduced him as “the baddest mo-fo in the room.” No argument here.

Newcomers to the scene, too, were at the sold-put show. Erik Hamel and Victor Brodén of “27” at Virgin Hotels Las Vegas were in the room. Lopez had a couple weeks ago caught the rowdy rock retrospective at 24 Oxford. You should, too.

Michael Shapiro and his Reckless in Vegas lineup performed at TCS, a reminder that the band was collateral damage in Caesars Entertainment’s cutting of live entertainment. RIV was planning to move into a new small-capacity room at Linq Hotel when the ax fell.

Brian Newman is back!

The “After Dark” headliner and Lady Gaga’s bandleader is playing Aug. 27 at The Borgata in Atlantic City. Same music-and-burlesque format as his NoMad Restaurant show, which follows Gaga — and will again, soon enough. Until then, we might take a road trip to A.C., a place we’ve yet to visit.

Michelle Johnson, one of the highlights of the TCS show in her pairing with composer and piano great Jeffrey Neiman, brings “Let it Be” to The Vegas Room on Thursday, Friday and Saturday. Neiman is again on keys with Johnson this weekend.

As the show’s title hints, this is a Beatles-themed music experience. Dinner is at 6:30 p.m., ambient Beatles revival action is at 8 p.m. (go to thevegasroom.com for reservations and info).

Johnson, the esteemed First Lady of Jazz in Vegas, once sang background for McCartney, alongside Ringo Starr, at the Hollywood Bowl. It was at a 1993 Earth Day festival. Johnson joined the full chorus of “Hey Jude” in the finale, and moved next to McCartney to close the night.

McCartney grabbed her hand, and that of another singer, and held it aloft. As Johnson says, “I’ve never recovered.”