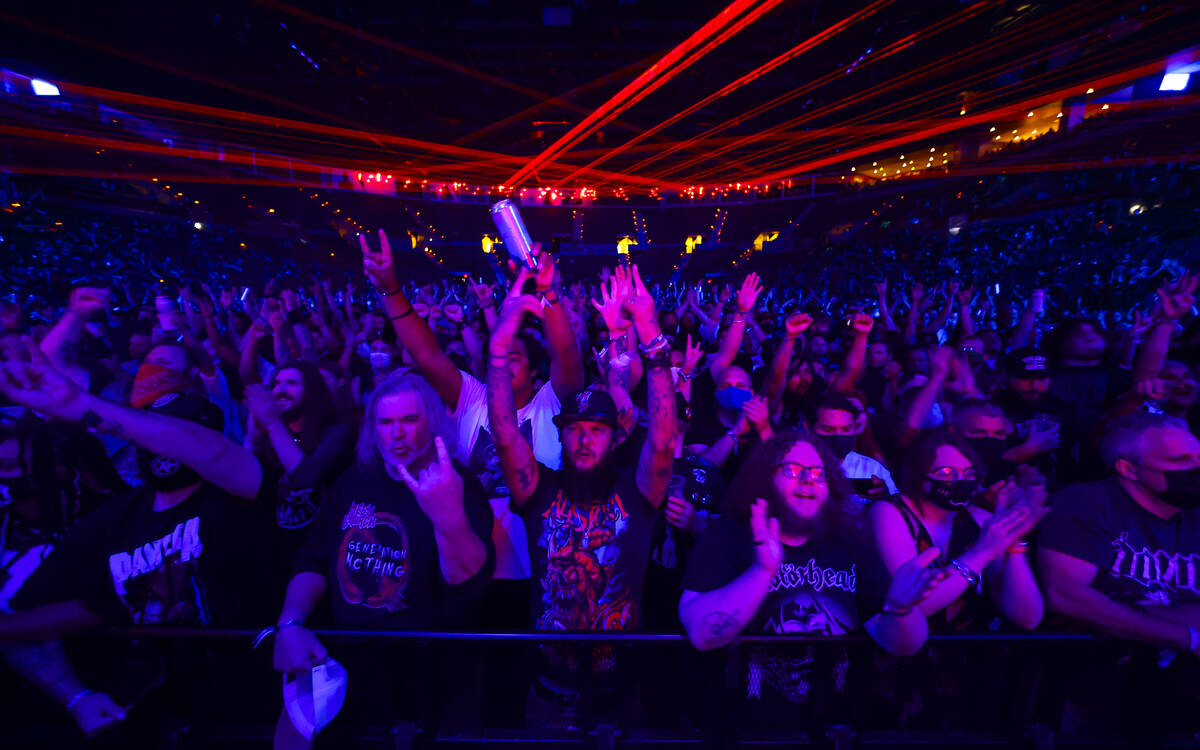 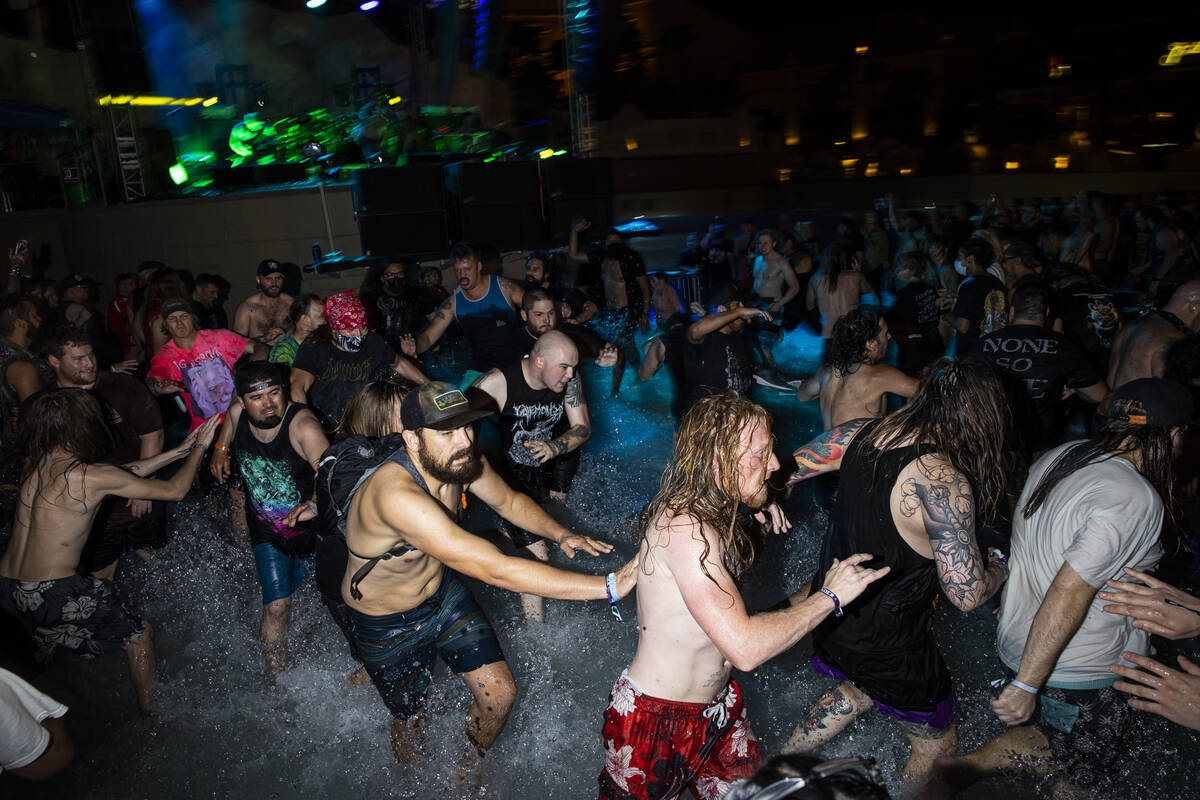 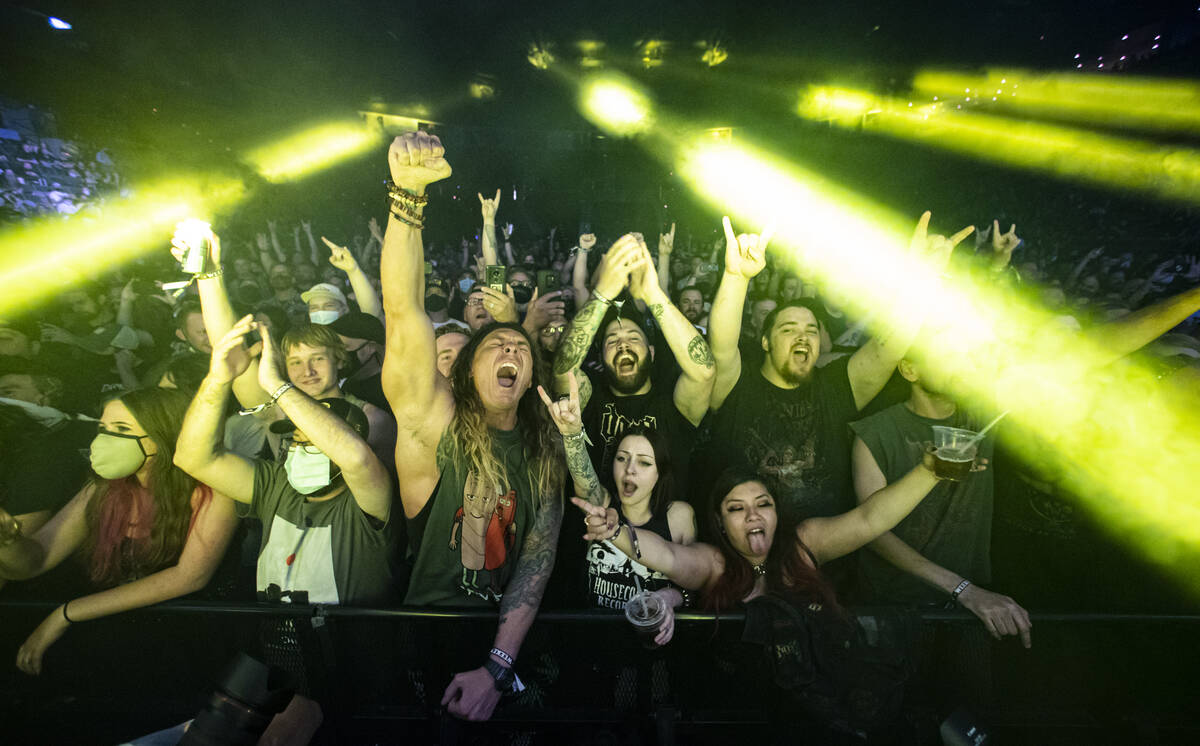 Fans of Down cheer as the band takes the stage during the final day of Psycho Las Vegas in Las Vegas on Sunday, Aug. 22, 2021. (Chase Stevens/Las Vegas Review-Journal) @csstevensphoto 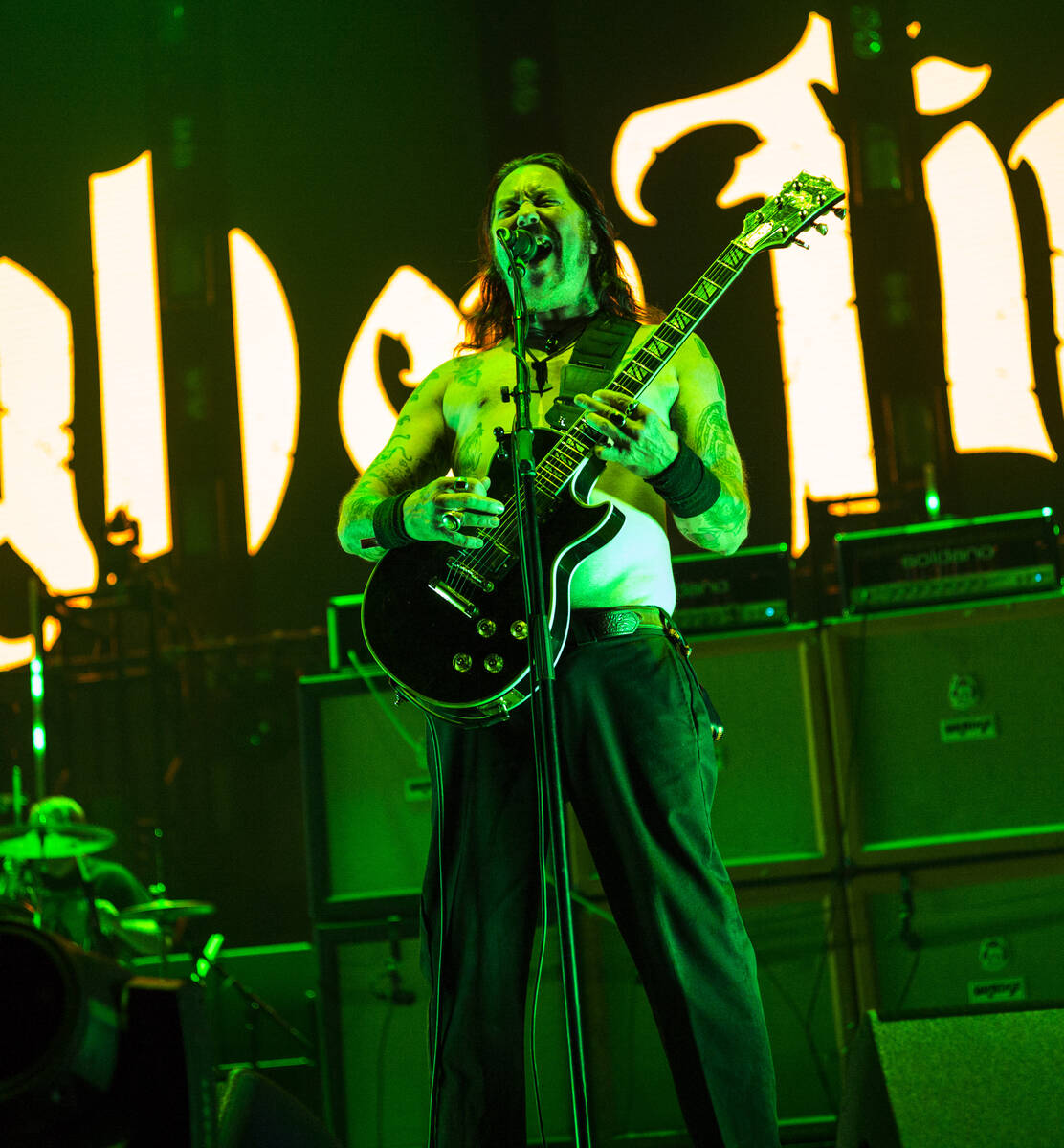 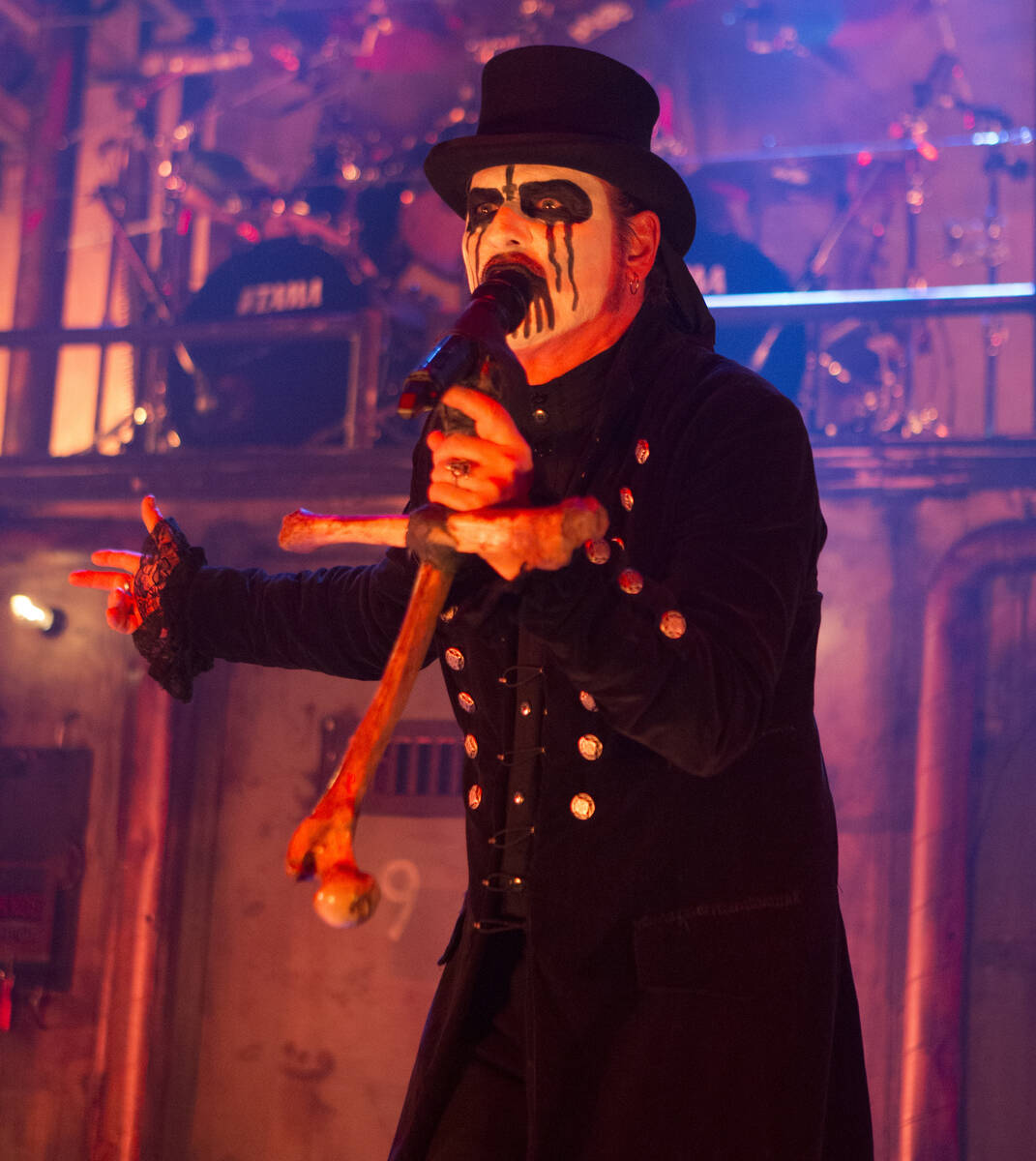 King Diamond performs in concert during his "Institute North America Tour" at The Tower Theater on Sunday, Nov. 10, 2019, in Upper Darby, Pa. (Photo by Owen Sweeney/Invision/AP) 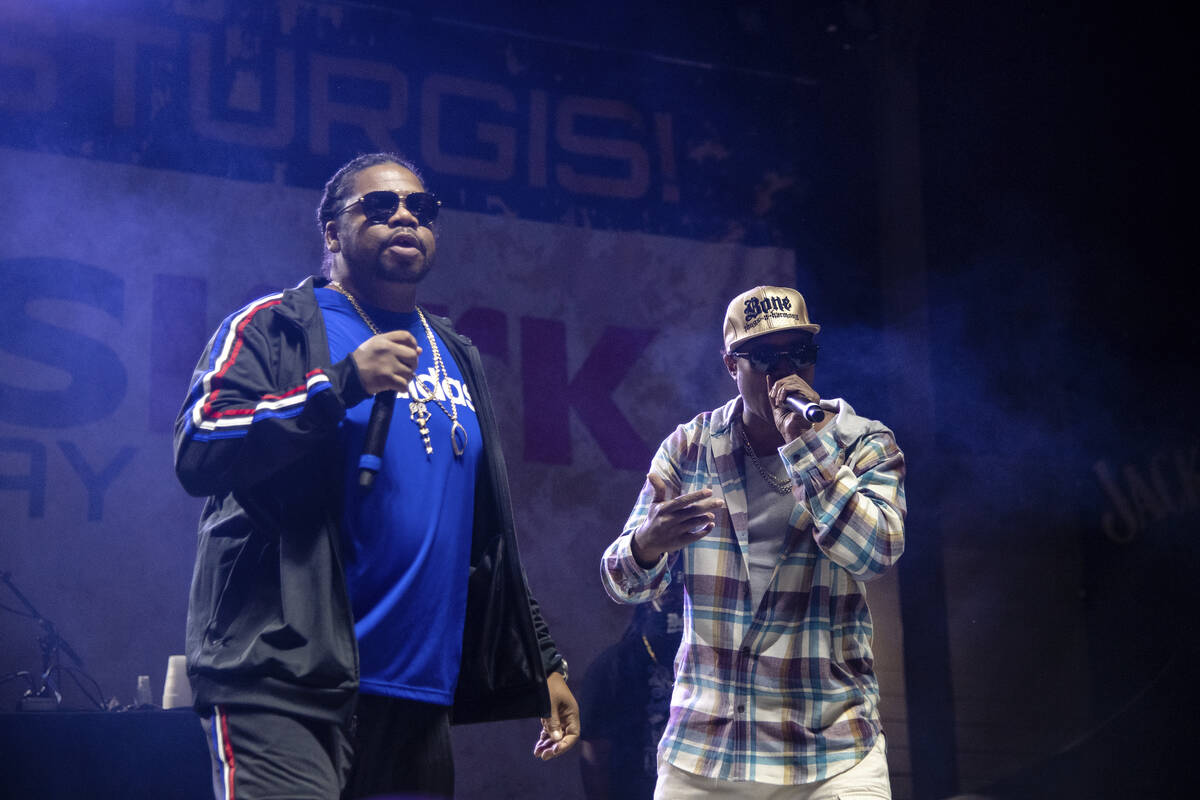 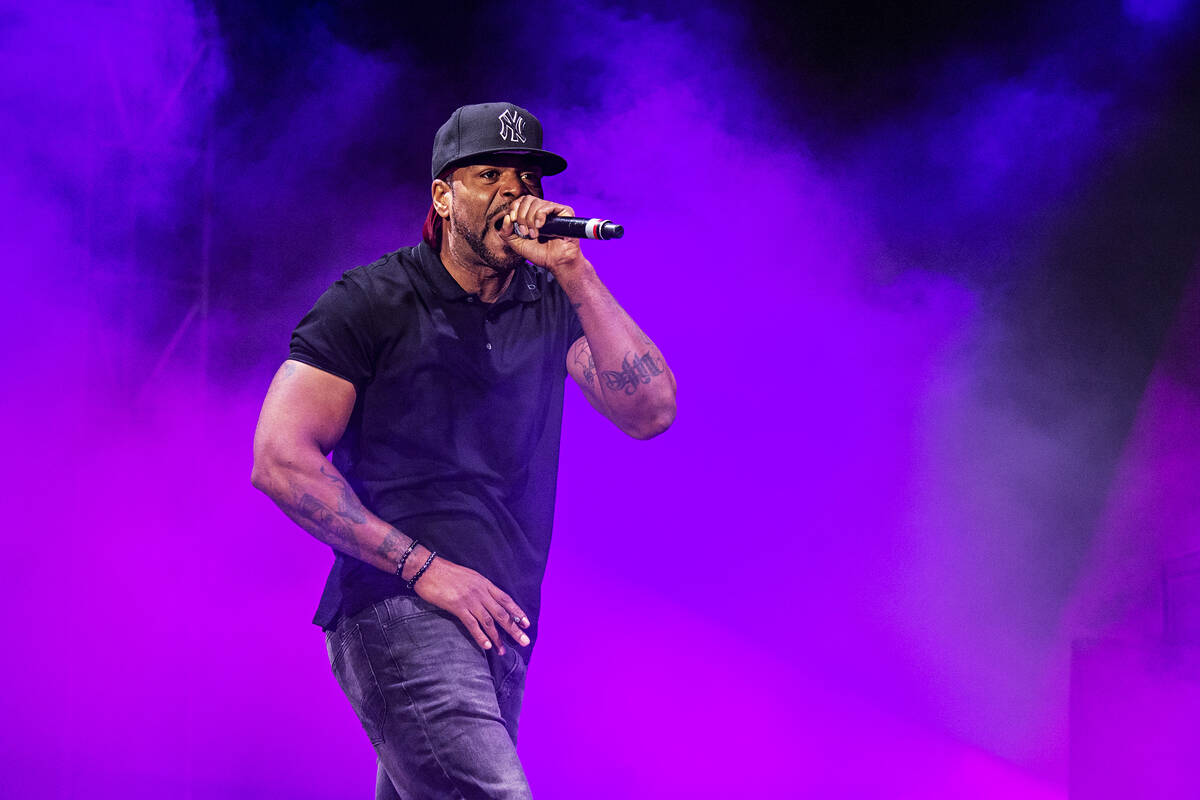 Method Man of Wu-Tang Clan performs during KAABOO 2019 at the Del Mar Racetrack and Fairgrounds on Friday, Sept. 13, 2019, in San Diego, Calif. (Photo by Amy Harris/Invision/AP) 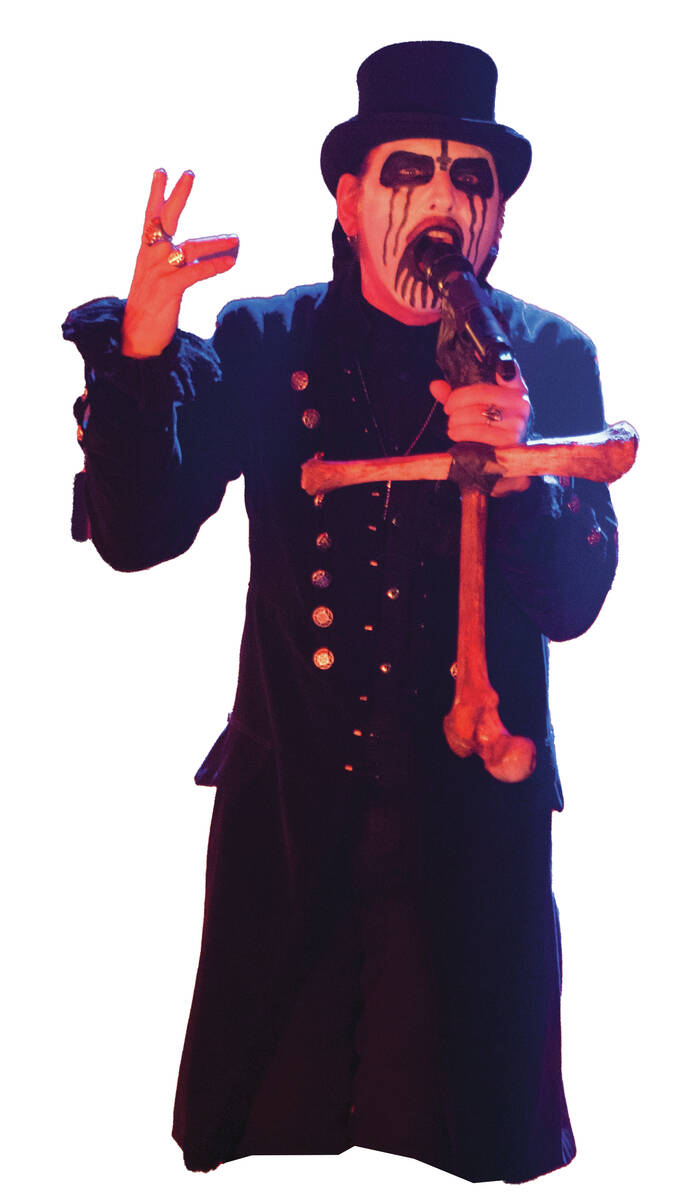 King Diamond performs in concert during his "Institute North America Tour" at The Tower Theater on Sunday, Nov. 10, 2019, in Upper Darby, Pa. (Photo by Owen Sweeney/Invision/AP)

Get ready for goth metal in the food court.

Yes, it’s that time of year again: Psycho Las Vegas is back.

The country’s best heavy music fest returns with a pool party Thursday, followed by three days of around-the-clock sounds, going from noon to well past 2 a.m. each night.

Now in its sixth year here, the fest moves to Resorts World for the first time, where it’ll take place in six venues across the property, from Ayu Dayclub to the Event Center to the Rose Ballroom to bar/eateries Famous Foods, Dawg House and Redtail.

So, what unites the extremely-hard-to-unite lineup of Psycho Las Vegas?

Well, it lies in what defines the term “heavy.”

Heavy can mean a lot of things.

All of those things can be found at Psycho, whose roster spans metal, hip-hop, jazz, bluegrass, techno, garage rock, new wave, you name it.

Triple … well, you get the idea.

To get you sufficiently prepared for the festivities, here are 1o things you must do at Psycho Las Vegas 2022:

Heavy metal is a lot like the “Friday the 13th” franchise: blood-spattered, hard to kill, fond of gratuitous nudity (on album sleeves, at least), a tad cheesy at times and seldom truly scary since back in the days when people wore parachute pants in public.

But there was a time when the genre really did frighten plenty of folks — namely, parental units and Tipper Gore.

Perhaps the band that most truly embodied this aura of evil beginning in the early ’80s was Denmark’s Mercyful Fate, with its satanic, corpse-painted frontman King Diamond giving sinister, falsetto voice to dual-guitar driven epics about black masses and the occult while howling into a cross-shaped microphone stand made of human leg bones.

The reunited Fate is Psycho’s biggest attraction this year, playing America for the first time in decades and performing its only U.S. show of 2022 here (the band was supposed to perform at Psycho in ’20 and ’21, but both appearances fell through because of the pandemic).

Shine on, you crazy Diamond.

Get scared some more

While we’re on the topic of corpse paint, Satan and murdering bandmates — OK, that’s a new one — a pair of Mercyful Fate descendants who were also supposed to play Psycho two years ago are finally making it to the fest.

The former is notorious for band members who burned churches and killed one another in the early ’90s; the latter is best known as one of the genre’s most forward-looking acts who brought a progressive, symphonic dimension to the music.

Get weird — and funky! — with Golden Dawn Arkestra

The “Afropocalypse” is upon us.

Or maybe just bust a funky move or two — totally your call.

Connecting the dots between jazz visionary Sun Ra, funk freakazoids Parliament Funkadelic and 1980 “space opera” “Flash Gordon,” this bunch is all about conducting “extra-dimensional experiments involving space and time travel through the use of sound and movement.”

The 11-piece group, whose members dress like they shop exclusively at Saturn’s coolest thrift store, truly has to be seen to be believed — and even then, you’ll demand your pupils submit to a polygraph test.

Show the ladies some love

Fond of enveloping walls of sound buttressed by equally stirring and anesthetizing vocals? Dig the dream pop of Warpaint and the dream grunge of Moonily.

Pro tip: Don’t sleep on the mesmeric noise-scapes of Elizabeth Colour Wheel, which enthralled at The Dive Bar in July with a bracing, borderline confrontational performance that had frontwoman Lane Shi Otayonii standing atop the bar at one point shrieking as if she was attempting to expel her lungs through her windpipe.

Revel in your love of ’90s hip-hop

Normally, tears are not shed at Psycho Las Vegas — unless, of course, a freshly poured brew is dropped before that first sip (moment of silence, please).

That may very well change this year, though, when tongue-knotting hip-hop troupe Bone Thugs-n-Harmony airs “Tha Crossroads,” its hit ode to departed loved ones.

One of the most successful rap groups of the ’90s, Bone will be joined at Psycho by members of its East Coast contemporaries the Wu-Tang Clan.

After performing his classic debut “Liquid Swords” in full last year, GZA returns to Psycho with groupmate Inspectah Deck, who’s been known to bomb atomically with Socrates’ philosophies and hypotheses.

In another ace Wu pairing, the always-on-point Raekwon teams up with perhaps the group’s most popular member, Method Man, who replaces the previously announced Ghostface Killah.

“Who be gettin’ flam when they come to a jam?”

Lose yourself in the merch area. Literally.

And Psycho Las Vegas possesses the Xanadu of merch areas, the Big Gulp of clothing with indecipherable band logos.

It’s mammoth and awe-inspiring, literally consuming an entire ballroom — as well as a similarly considerable expanse of one’s disposable income.

Salute the mayor of Psycho

The emperor may or not have any clothes, but one thing’s for sure: The mayor of Psycho Las Vegas has no shirt.

The unofficial face of the fest, Pike has performed at Psycho every year since its 2016 inception in one of those two bands, returning this go-round in High on Fire for the fourth time.

And he’s done so shirtless every time.

Guess when you practically sweat riffs you don’t want any chest-covering fabrics potentially absorbing a power chord or two.

Of course, there’s dancing at Psycho Las Vegas that doesn’t involve throwing elbows and getting slimed in the pit by the sweaty dude whose pores weep oceans of Budweiser.

For the rivet-heads, there’s Nitzer Ebb. The pioneering British group helped popularize EBM (electronic body music) in the early ’80s with its high-energy blend of industrial and dance music.

Other electronic artists at the fest this year range from the John Carpenter-inspired ’80s synthwave of Dance With the Dead to the digital punk of N8NoFace to the French darksynth of Carpenter Brut to the world music-mining “ethnotronica” of Beats Antique.

Yes, the latter performs with a belly dancer.

Sure, with growling vocals suggestive of a gastrointestinally distressed Cookie Monster ralphing up a bag of tainted Nutter Butters and pass-the-Pepto lyrical content, death metal can be an acquired taste — kind of like a kale shake loaded with entrails.

But for those with a fondness for the fast, the gory and the guttural, Psycho has quite the lineup, headlined by Brit gross-out greats Carcass, back for a third time, and fellow melodic death metal pioneers At the Gates.

Lemmy Kilmister, the late, great frontman for speed-of-sound rock ’n’ rollers Motörhead, swilled whiskey from a pilsner glass and smoked like the Marlboro Man freshly crisped by a blowtorch.

And yet the man somehow made it to 70 before dying in December 2015.

And seeing how Lemmy loved the ladies, how fitting is it that there’s a female Motörhead tribute act, Motorbabe, also playing Psycho?

But for one weekend, at least, you can try.