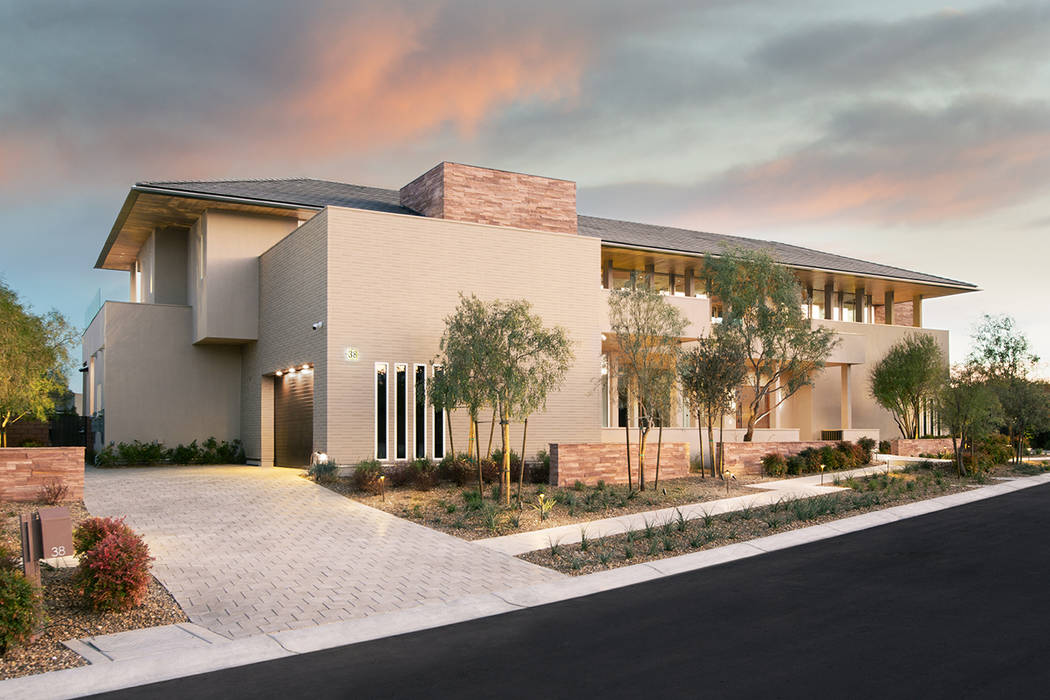 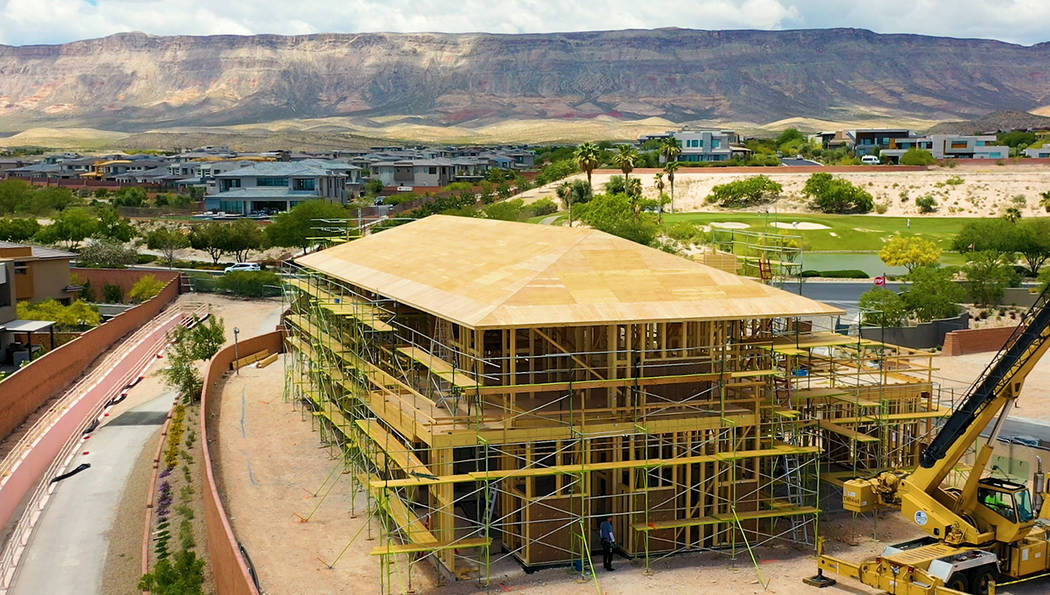 Japan-based Sekisui House shows off its framing technology in a new concept home on Hawkeye Lane in the Talon Ridge neighborhood. (Woodside Homes) 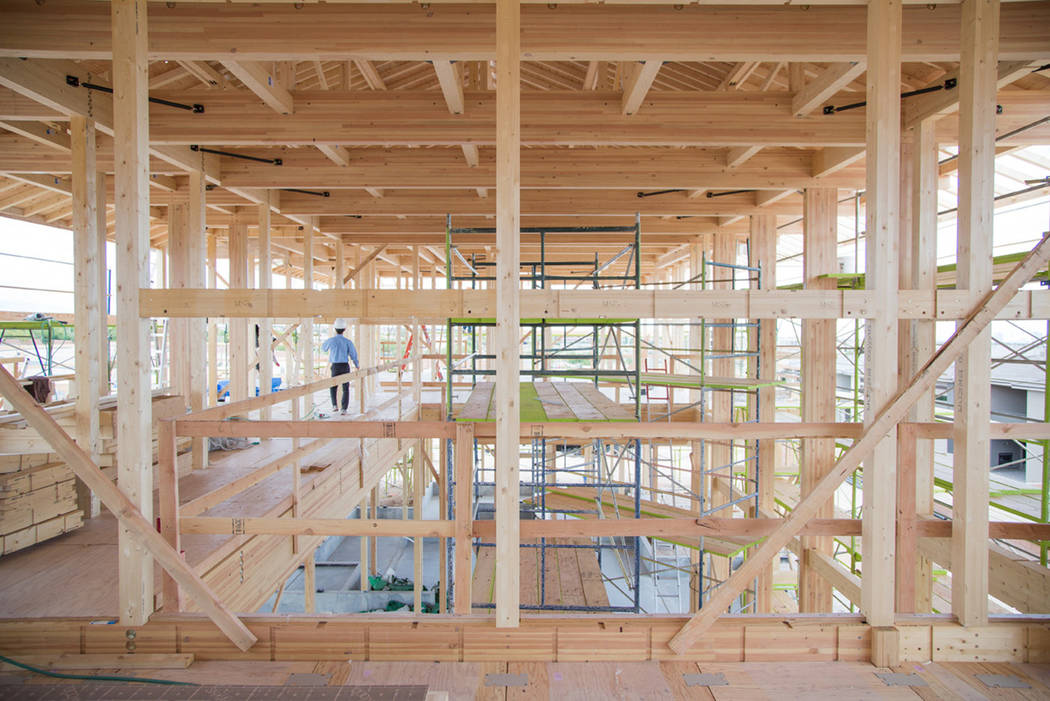 The framing of the house, which measures 5,400 square feet, was completed in eight days with a local framer who went to Japan to learn about it. (Woodside Homes)

A recently completed multimillion-dollar prefabricated home in Summerlin that brings innovative Japanese homebuilding technology to America goes under the national spotlight this week when it’s unveiled during CES in Las Vegas.

The concept home on Hawkeye Lane in the Talon Ridge neighborhood is a collaboration between Builder magazine and Japan-based Sekisui House with its wholly owned building company Woodside Homes. In addition to the tours this week, it will be featured later this month during the International Builders’ Show in Las Vegas by Hanley Wood, the owner of Builder magazine that sponsors a concept home on an annual basis.

In 2018, Hanley Wood reached out to Woodside, which was purchased by Sekisui in 2017. Sekisui is the largest homebuilder in the world that does prefabricated homes in Japan and Australia.

“The goal is to showcase how the trends are changing in housing and what the future can look like,” said Joel Abney, the national vice president of operations for Woodside Homes. “Woodside and Sekisuidecided if they were going to do a concept home that showcased the future of building, we wanted to show the Japanese technology for resilience, sustainability and healthy homes. We wanted to showcase it as a model for the U.S. to look at how we can think differently about housing.”

The home is built on Sekisui’s technology called Shawood — a post-and-beam system that uses sustainable lumber and builds a system that is earthquake resistant, Abney said. The Shawood pieces with the aid of computers and automation are precision engineered, cut and drilled in a factory near Tokyo and shipped to the U.S., where the pieces are put together in the field, Abney said. Essentially, the “rough structure” of the home is prefab, which covers the framing, the foundation and floor systems, he said.

“There’s not much technological advancement overall in single-family home construction,” Abney said. “We’re building the same way in the U.S as we were 20, 50 and 100 years ago with a few technology updates. This is looking at advancing it to that next level.”

Several hundred thousand pieces were shipped from Japan for the concept house, Abney said. Some of the pieces of lumber were more than 20 feet long and more than a foot-and-a-half deep, he added.

Builder magazine reported eight shipping containers arrived in Long Beach, California, from Japan. Some of the posts and beams weighed about 2,000 pounds. Number sequences of the parts were on a blueprint to guide in building the home. Roofing, tile and windows were obtained from domestic sources.

The framing of the house, which measures 5,400 square feet, was completed in eight days with a local framer who went to Japan to learn about it, Abney said. A similar-sized custom home in the U.S. would take 45 to 60 days to build the frame, he said.

“When it goes together, it does with minimal tolerances, which means the quality of the entire project is much higher,” Abney said. “Having the foundation of the house be exact and frame prefabed, those are the big pieces. Once you have those, the rest of the house is easier to put together and goes together in a higher quality. You don’t have to do things like measure because you know the exact dimensions.”

That helps with a shortage of labor, one of the major constraints in homebuilding today. It’s a system easy to understand and doesn’t require framers with lengthy experience, he said.

There’s an expectation of cost savings beyond building a concept home, Abney said. The technology isn’t less expensive than traditional stick framing when it comes to materials, but it’s more efficient because it can be built faster with less rework and lower warranty costs, he said. What those savings are is proprietary, he said.

“We will be looking at this home and taking portions of this design and be able to apply it to future business, almost like a concept car in Detroit,” Abney said. “You very rarely see a concept car pulled out and shipped to production exactly as is. But what we’ve learned from the processing in building the home is you can take specific technology and apply it to your business. You have a higher upfront cost but a better return in the long run because of the efficiencies in the build process.”

The two-story home has four bedrooms and 5½ baths and 7,200 square feet under the roofline with views of the Strip and nearby mountains. It has a two-car garage on one side and a single-car garage on the other. The backyard has a pool with a Japanese teahouse that provides a place for mediation and relaxation.

The home’s name is Chowa, which in Japanese means balance.

“It’s a good balance between East versus West,” Abney said. “They have a good two-story with an open great-room concept. It’s designed to adjust to the lifestyle of the people living in it. Family dynamics change. You have kids. They grow up, move out and your parents move in or your kids move back in. The house is designed to be flexible with the lifestyle needs of consumers these days. There’s more multigenerational living and much more need to balance your life overall.”

The home has clean lines and has a midcentury modern feel, and red rock that’s part of the face, Abney said. The beams are larger, but there’s nothing in the materials that depict it as a Japanese house.

“It’s contemporary East meets West,” Abney said. “What we did with the house to showcase that spirit of balance is that both Sekisui architects and U.S. architects worked together on the project. That shows itself through the design of the house. I have driven through most of the area, and people haven’t seen that type of design. There are some elements that people recognize and some that will be different.”

There are floor-to-ceiling windows that showcase that design, Abney said. One of the windows weighs 1,000 pounds.

“We have had a few builders and industry professionals go through and everyone is struck by the precision and the quality of all the materials used for the frame,” Abney said. “It’s a different feel for anyone that is familiar with homebuilding.”

The work started in May and was completed by the end of October. A custom home of that size traditionally takes 12 to 18 months to build, Abney said. The pre-fab work in Japan took a couple of weeks.

Woodside chose The Ridges because of its long-standing relationship in building in Summerlin, Abney said.

“We wanted to introduce that we could build a high-quality house that is sustainable, energy-efficient, healthy and don’t have to compromise between design and performance,” Abney said. “We wanted to have a location that would really feel appropriate in, and The Ridges is a great location. The area we built in is a new section, and it was the right location and right level for this particular house. It was a perfect marriage of what Woodside and Sekisui was looking for and what Summerlin provided.”

There have been several inquiries about buying the home, but it’s not on the market and instead is being used to showcase the different way of doing homebuilding. Woodside won’t disclose a price, but Abney said high-end homes in The Ridges go for $2 million and more.

Abney said the home could be anywhere. The architecture would have to be adjusted for the region, but the structure and concept can be applied to any environment, Abney said.

“We’re still evaluating where to take the concept next,” Abney said. “We will take some technology from the house and use it in our future plans. We’re just not quite prepared to discuss what those future plans are. We would definitely utilize this in multiple markets. We build in the Western half of the United States — Utah, Nevada, Arizona and three markets in California doing about 2,200 homes a year.”

Woodside wouldn’t apply it across the board, but this type of construction can be used for any sized home, Abney said. In Japan, it’s used for homes that range from 1,200 square feet to 5,000 square feet and more, he said.

In the long term, shipping frames from Japan doesn’t work, but the concept of precise engineered pre-designed houses can be applied to every level and not just the upper end.

“There is no limit to size, and the best discussion for us is can we apply this to current construction or future construction methods,” Abney said. “There could be product lines that come from this, and we’re evaluating those business opportunities.”

Abney said he’s been building homes since he was 10, when he started in a family-owned business. There’s always been ways to improve homebuilding, and this concept of prefab precise building is striking, he said.

“With the foundation we put in place, and had a millimeter out of square over 120 feet from corner to corner,” Abney said. “It’s amazing how close things are. The main difference why it’s so precise is because Sekisui develops things from a holistic perspective. The U.S. tends to think of putting components together, but Sekisui thinks about the whole system approach to build things. That’s why it drives that difference in quality.”