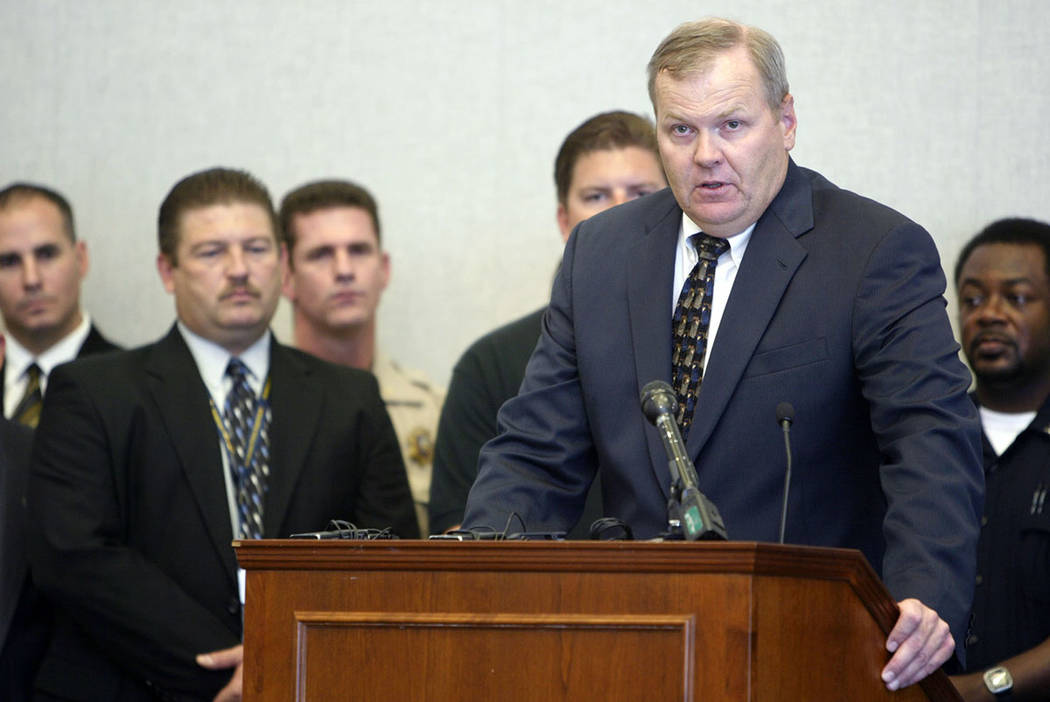 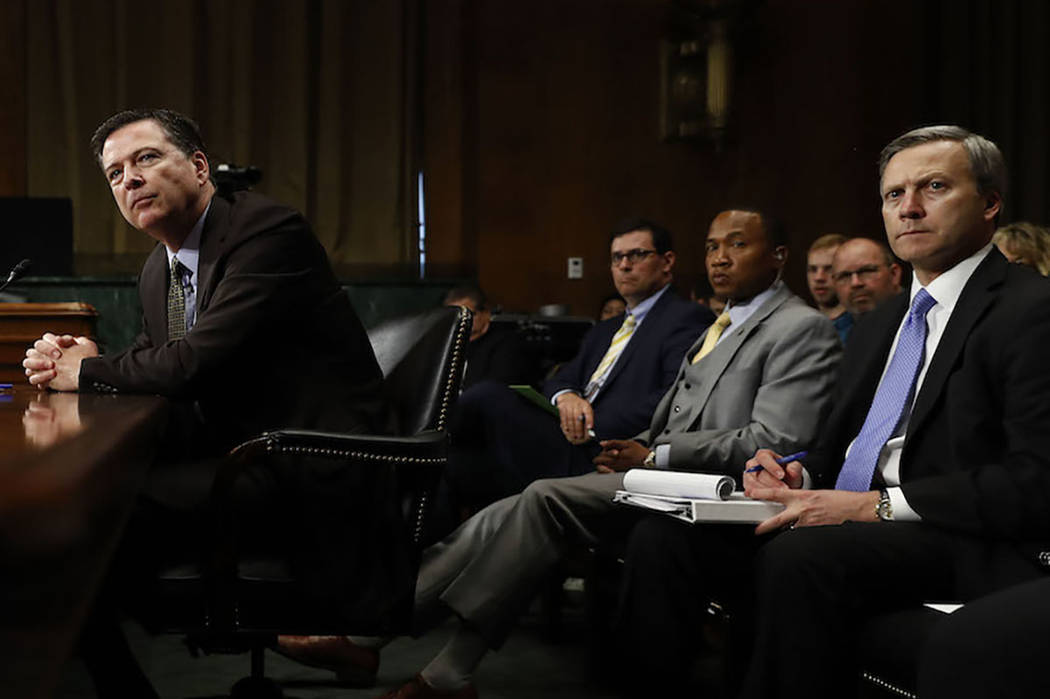 FBI Director James Comey pauses as he testifies on Capitol Hill in Washington, Wednesday, May 3, 2017, before the Senate Judiciary Committee hearing. Behind him, right, is Assistant FBI Director Greg Brower. (AP Photo/Carolyn Kaster) 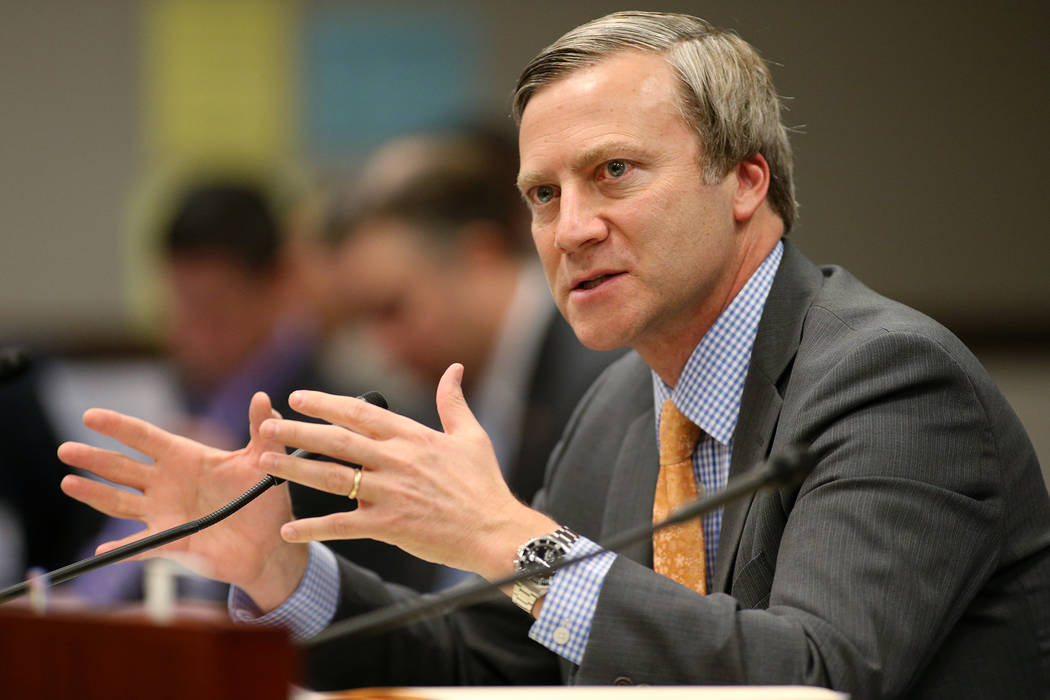 After a stormy year, the long tenure of Steven Myhre as the No. 2 prosecutor in the Nevada U.S. attorney’s office has ended under secrecy.

Within the past month, Myhre left his job as first assistant to Interim U.S. Attorney Dayle Elieson and took on new duties in the office as a senior litigation counsel, several former federal prosecutors who have spoken with office members told the Las Vegas Review-Journal.

His new position comes with no supervisory responsibilities, but allows him to mentor and train younger attorneys, according to a Justice Department manual.

Last May, Myhre, who spent about 15 years as first assistant in the office, was ordered to undergo anti-sex discrimination training as a result of a federal case filed by a female prosecutor during the tenure of former U.S. Attorney Greg Brower in 2008 and 2009.

In January, Myhre came under fire again after Chief U.S. District Judge Gloria Navarro dismissed the high-profile criminal case against rancher Cliven Bundy and his co-defendants over the armed 2014 standoff near Bunkerville. Navarro concluded that Myhre’s prosecution team committed “flagrant” misconduct by not turning over evidence to the defense that could have harmed the government’s case. The Justice Department earlier had ordered an internal investigation of the prosecution team.

Elieson this week refused to confirm or comment on Myhre’s move and other management changes in the office, including the promotion of Andrew Duncan from criminal division chief to executive assistant U.S. attorney. She said through a spokeswoman that she considered the matters to be personnel issues. But other U.S. attorneys across the country put out news releases about such changes, and larger offices in New York, Los Angeles and Washington D.C. include the names of supervisors on their websites.

Charles La Bella, a retired Justice Department official, said Elieson has an obligation to disclose the names of her managers.

“While I understand personnel actions are not public and shouldn’t be public because people have a certain degree of privacy, the people who are in those positions should be identified,” said La Bella, a former U.S. attorney in San Diego and deputy fraud chief with the Justice Department. “The public has a right to know.”

At the same time, La Bella said he has sympathy for Elieson, who is new to Nevada.

“She has a formidable task getting the office marching in the same direction when she has no history in that office,” he said. “Every United States attorney’s office has its own personality. It’s like walking into a new classroom as a teacher.”

Elieson has not filled the first assistant’s position, and it is unclear whether Myhre requested the new assignment or was demoted. Trisha Young, a spokeswoman for Elieson, denied a request to interview Myhre and Duncan, now the No. 2 person in the office.

The Justice Department in Washington did not return a call for comment.

Myhre was among those singled out last year in a U.S. Equal Employment Opportunity Commission decision critical of the office under Brower.

The EEOC decision, obtained by the Las Vegas Review-Journal in July, concluded that Brower had subjected the female prosecutor, who has since left the office, to sex discrimination and retaliation. Myhre was Brower’s first assistant.

The EEOC ordered Myhre, Brower and other office managers, to undergo anti-sex discrimination training and submit a compliance report. The agency also ordered the Justice Department to pay the female prosecutor $287,998 in legal fees, costs and damages.

Brower at the time was the FBI’s top liaison with Congress during a politically charged investigation into Russian election meddling. Last month, he left his position as an FBI assistant director to work in the Las Vegas and Washington, D.C. offices of the high-powered law firm Brownstein Hyatt Farber Schreck.

In January, the Justice Department took the unusual step of bringing Elieson from Texas to temporarily take the reins of the Nevada office rather than hiring someone from within the state.

Nevada’s congressional delegation traditionally recommends a new U.S. attorney, who then is appointed by the president and approved by the U.S. Senate. But in Elieson’s case, the Justice Department took control of the process with her temporary appointment.

Her 120-day term ends in May, which means if she wants to continue heading the office, she must be appointed by Navarro for another temporary term until the president decides to put someone in the position for the long term. Under federal law, Navarro is not bound to select Elieson and could choose someone else.

Former federal prosecutors said Elieson has been making administrative changes that suggest she is expecting to remain at the helm of the office.

It is not unusual for a new U.S. attorney to install a new management team, the former prosecutors said. Elieson also has added more supervisors and reorganized the criminal division, which is now headed by Assistant U.S. Attorney Cristina Silva.