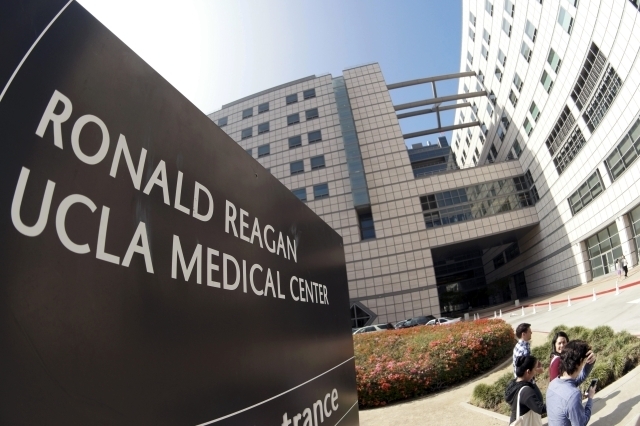 People walk past the entrance to the Ronald Reagan UCLA Medical Center in Los Angeles, Feb. 19, 2015. The large Los Angeles teaching hospital has told scores of patients they were possibly exposed to a drug-resistant bacterial "superbug" during endoscopy procedures that infected seven patients and may have contributed to two deaths. (Reuters/Jonathan Alcorn) 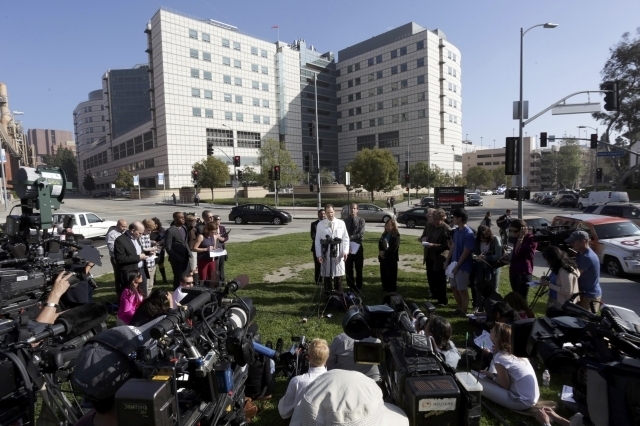 Zachary Rubin, medical director of clinical epidemiology and infection prevention, speaks at a news conference by UCLA Health System and county officials at the Ronald Reagan UCLA Medical Center in Los Angeles, Feb. 19, 2015. The large Los Angeles teaching hospital has told scores of patients they were possibly exposed to a drug-resistant bacterial "superbug" during endoscopy procedures that infected seven patients and may have contributed to two deaths. (Reuters/Jonathan Alcorn)

LOS ANGELES — Attorneys for two patients who were infected with a drug-resistant bacterial “superbug” during medical procedures in a Los Angeles hospital, one of whom died, have sued the maker of the devices used in their care.

Aaron Young, an 18-year-old high school student who remains under monitoring at a hospital fighting the severe infection, and the family of Antonia Cerda sued Olympus Corp, which manufactured the specialized scopes used during the outbreak at the UCLA Ronald Reagan Medical Center.

The suit alleged that the company’s reusable duodenoscope was unsafe because the cleaning protocols for the complex device were not updated following its recent redesign.

“Defendants continued to manufacture, sell, distribute, promote and supply the Q180V Scope as to maximize sales and profits at the expense of the health and safety of the public,” the suit said.

Representatives for Olympus did not immediately return requests for comment on the lawsuits.

Both suits seek unspecified damages alleging fraud and negligence on the part of Olympus, and Cerda’s also included injury and wrongful death claims.

The complaints said that medical staff followed the company’s cleaning guidelines before using the devices, but plaintiffs’ attorney Pete Kaufman said UCLA and the University of California regents could be added as defendants after further investigation. Kaufman also said more patients would likely join the suit.

Cerda, whose case was filed on Wednesday, was exposed to one of the contaminated scopes as she underwent several procedures last October.

Young, who filed suit on Monday, went to the medical center in mid-2014 for a pancreatic ailment then became ill and was hospitalized a short time later, said Kevin Boyle, an attorney on his legal team. By November, he had been diagnosed with carbapenem-resistant enterobacteria, or CRE, the attorney said.

Seven patients were infected with CRE during endoscopies at the large Los Angeles teaching hospital between Oct. 3 and Jan. 28, and two died. Officials warned that as many as 179 people may have been exposed to CRE.

Officials have said there is no broader threat to public health, and that the hospital has called and sent letters to at-risk former patients.

All five of the confirmed infected patients who remain alive are under treatment, UCLA spokesman Enrique Rivero said on Wednesday.

The scopes, which are used in a variety of gastrointestinal procedures, can be difficult to disinfect properly, even when instructions provided by the manufacturers are followed, the FDA has said.

The U.S. Food and Drug Administration on Wednesday approved the use of Actavis Plc’s antibiotic, Avycaz, to battle drug-resistant bacteria known as superbugs.

The drug can be used in combination with generic antibiotic metronidazole to treat adults with complicated intra-abdominal infections. As a standalone medication, it is used to treat urinary tract infections.

Concerns about superbugs have escalated, especially after the UCLA Health System said last week that seven patients were infected with a potentially deadly, drug-resistant strain of the Enterobacteriaceae bacteria, and that more than 100 people might have been exposed to it.

The World Health Organization warned in April of “a post-antibiotic era” in which common infections would once again become killers.