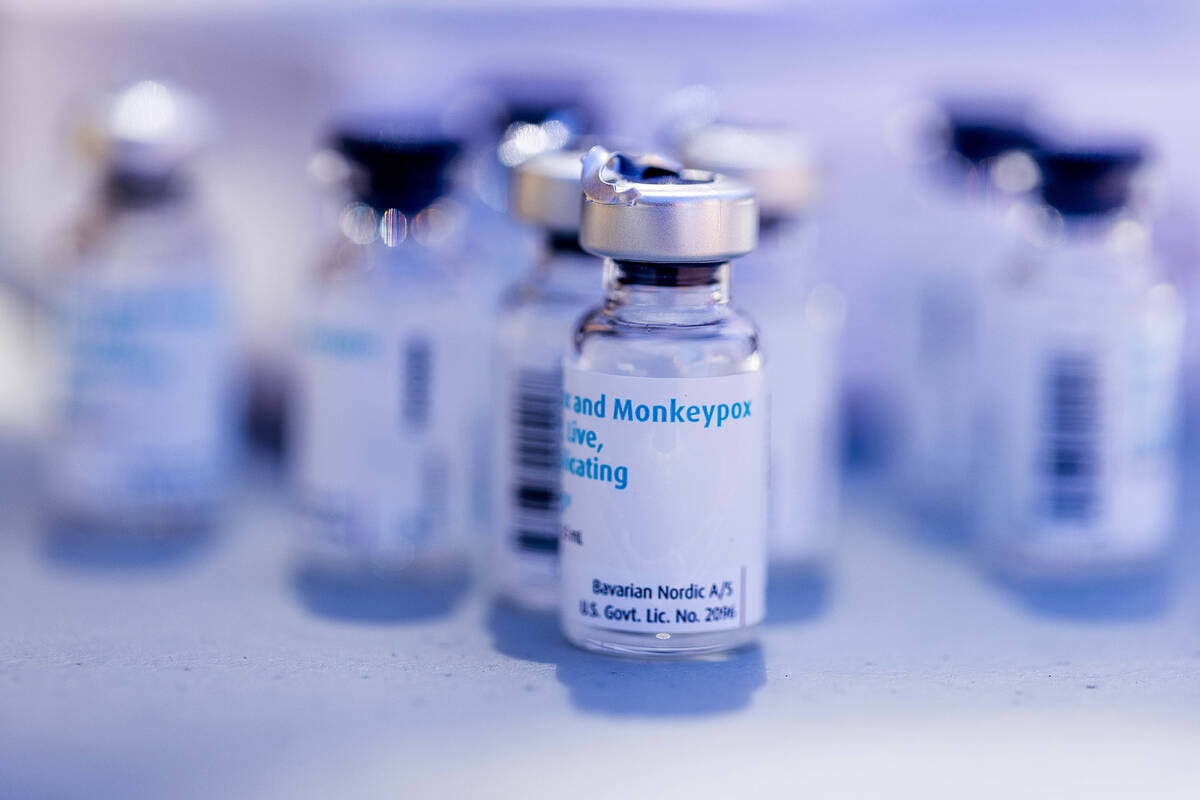 Clark County has hit a milestone of 100 confirmed or probable cases of monkeypox, 99 of them in men, according to data released by the Southern Nevada Health District on Wednesday.

One case was in a female, transgender or gender-nonconforming person. The health district did not specify which, citing privacy concerns.

There were no cases identified in people under 18 or older than 64.

Most cases of monkeypox have been identified in men who have sex with men, according to public health authorities. However, anyone can contract the disease.

Of the 100 Clark County cases, 59 were in people who identified as lesbian, gay, bisexual, transgender or queer, according to the data. The sexual orientation of 39 people was unknown. Two identified as heterosexual.

In most cases, the virus is spread by close, intimate contact, such as during sex. The disease is characterized by a rash, sometimes leading to pus-filled lesions, and flu-like symptoms. It is rarely fatal, but the lesions may be painful and lead to scarring.

The disease also can be spread through respiratory secretions during prolonged face-to-face contact or intimate physical contact, according to the health district. Touching fabrics such as linens that were in contact with a rash or body fluids may also spread the virus.

The demographic data shows that 26 of the cases were in whites, 25 in Blacks, 23 in Latinos, six in people who were American Indian, Alaska native, Asian, or Hawaiian or other Pacific Islander.

“In data reports with fewer than five cases, the Health District does not provide any additional details in order to protect individual privacy,” district representative Stephanie Bethel said.

Eleven were in people who identified as multiracial or other.

The current risk to the general public of contracting monkeypox is considered low, according to the health district.

The question most asked about monkeypox is “how much am I at risk for this?” said Mona Lisa Paulo, director of clinic and HIV services at The Center, which serves the LGBTQ population.

While most people in the United States with monkeypox are men who have sex with men, the disease is not exclusive to this group, Paulo said. “It’s not gender-specific. It’s not sexual orientation-specific to anybody.”

The center is hosting a panel discussion Thursday at 6 p.m. to answer questions about monkeypox, including the risk.

“We want to help people make the best informed decisions to protect their health and the health of their communities through up-to-date information,” Paulo said.

Vaccine is available in Clark County to people considered at high risk for monkeypox, including those who’ve had close contact in the past 14 days with someone known to have monkeypox or suspected of having it. Close contacts include sexual partners and household members, said Dr. Cort Lohff, chief medical officer for the Southern Nevada Health District. Some close contacts are identified through the district’s contact tracing investigations.

The vaccine, known by the brand name Jynneos, can reduce the symptoms of someone who was exposed if given within 14 days, and even prevent disease if administered within a few days, health authorities say.

Also among those eligible for the vaccine are gay or bisexual men and transgender people who’ve had multiple or anonymous sex partners in the past 14 days, the incubation period for the disease.

The health district has administered 2,848 doses of vaccine, and continues to receive shipments from the federal government via the state.

Appointments for vaccine, which can be made at https://vax4nv.nv.gov/patient/s/, fill up quickly, Lohff said, suggesting that demand is outstripping the limited supply. Several checks of the appointment portal this week showed that no appointments were available.

As supplies increase, Lohff expects eligibility for vaccine to eventually be expanded. But for now, there have been rare instances of the district turning away individuals who don’t meet the criteria, including sex industry workers and people with skin diseases unrelated to monkeypox, he said.

The Center is administering vaccine at its clinic on a walk-in basis from 1 to 6 p.m. Monday through Thursday and from 9 a.m. to 2 p.m. on Friday and Saturday.

No ‘tidal wave’ of demand

Meanwhile, as of earlier this week, neighboring Nye County, which reported its first case of monkeypox over the weekend, was awaiting its first delivery of vaccine.

“It hasn’t been a tidal wave of people wanting to be vaccinated,” Nye County emergency manager Scott Lewis said.

The only people who have directly asked for the vaccine have been first-responders, who potentially could come into contact with a case, he said.

What about women in the rural county’s several legal brothels?

“We reached out to the brothels and some of the ladies have expressed interest” in the vaccine, the county’s public information officer, Arnold Knightly, said in a follow-up email.

“We will keep in communication with them to make sure they are included when it becomes available in Nye County.”

The Center will host a monkeypox town hall meeting at 6 p.m. Thursday.

A panel of experts will provide information on how to get checked, tested and protected from monkeypox. The panel also will answer questions.

RSVP for the event at https://tinyurl.com/thecenter-monkeypox.

The Center is located at 401 S. Maryland Parkway.