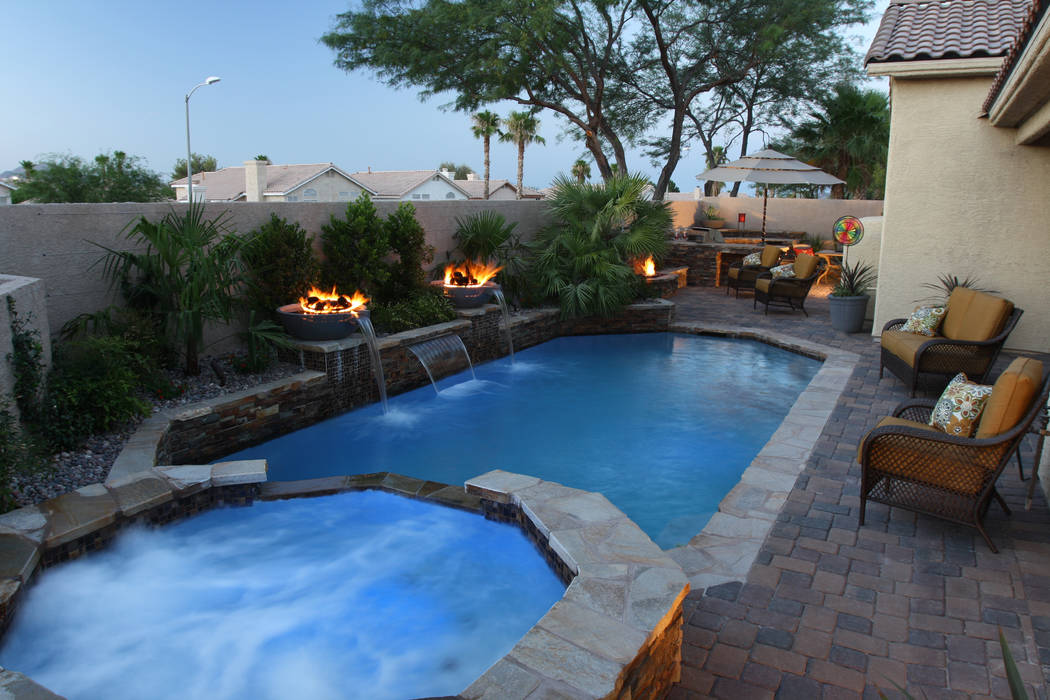 Paragon Pools Brent and Denice Hermansen of Henderson spent $40,000 on updating their pool and backyard. The project by Paragon Pools included several upgrades, including a new blue-tinted white plaster surface for their inground gunite pool. 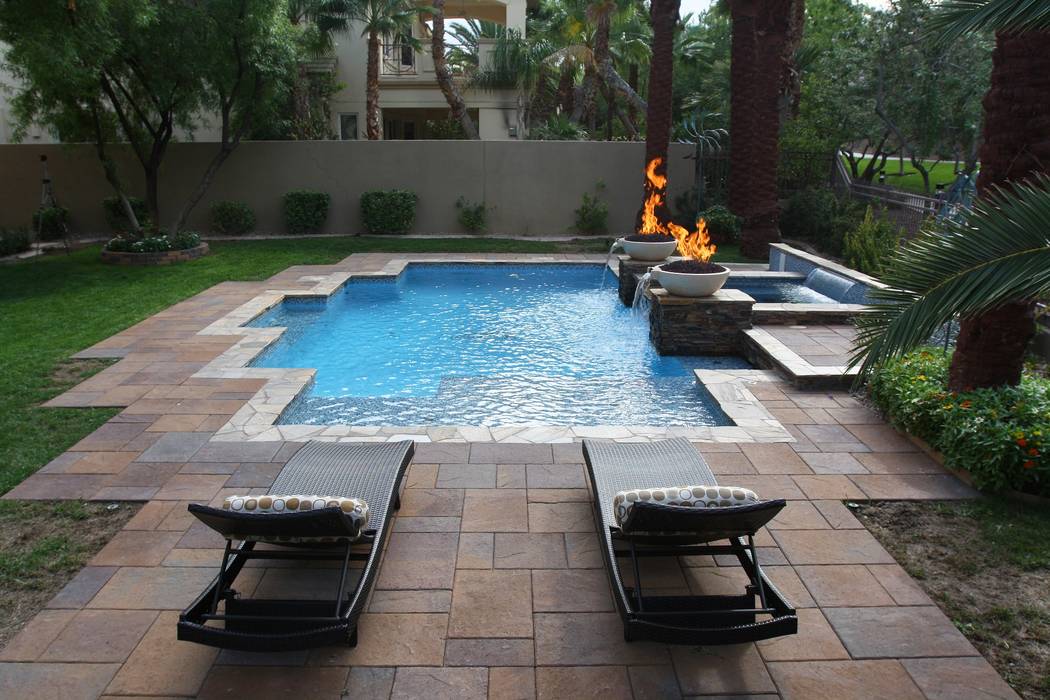 Paragon Pools This pool renovation by Paragon Pools consisted of replacing existing deck with pavers, adding water fire features, replacing the back wall of the spa, which added a sheer descent and enlarge the spillway.

When Brent and Denice Hermansen looked at their swimming pool and backyard, they saw worn and tired. Outdated and, to be honest, a bit on the cheap side.

You’ve heard of “wow factor?” This was “ow factor.”

“It wasn’t much of an outdoor entertainment area,” Denice Hermansen says of their alfresco eyesore.

The remedy for the Hermansens, who live in the Green Valley area of Henderson, was a sweeping backyard renovation — a $40,000 panacea that included an outdoor kitchen, upgraded landscaping, electric fire bowls, a deck of paving stones, water features and a new white plaster surface, with a soft blue tint, for their 10-feet-by-25-feet in-ground gunite pool.

“Now, when we entertain, it is ‘wow,’ ” Denice Hermansen says of their guests’ reactions.

Usually, makeovers like the Hermansens’ begin with a homeowner noticing a dull, dingy pool surface, according to some of Las Vegas Valley’s leading pool renovation companies.

“That’s what people seem to focus on first,” says John LaBreche, owner of Peak Pool Plastering, which replasters between 1,000 and 1,200 in-ground pools each year. “They see a horrible pool surface, and they want the pool replastered. Then it seems to grow from there.”

The growth can mean all sorts of upgrades and enhancements, including decking, pool lights, water features, landscaping and even kitchens.

Brent Hermansen, 67, chief executive of a Washington, D.C., consulting firm, admits to going big on his renovation because his pool and backyard looked passé.

“We bought the house in 1995 when it was 6 months old, and that’s how old the pool was,” he said. “And the original owners, I think they just skimped on a lot of things. … Everything looked old. It was time.”

So often the driving force behind such renovations is the pool surface, a cement-based coating of about three-eighths of an inch over the gunite structure.

“That’s pretty much how it starts,” says Joe Vassallo, president of Paragon Pools, which did the Hermansen’s 2014 renovation. “You start to see cracks, delamination and discoloring of the pool’s surface.”

Where, when to start

The surface of an in-ground gunite pool can last 20 years or more, but because of Las Vegas’ hard water, such longevity is atypical, says Ron Hair, sales manager for Adams Pool Solutions, which does about 500 replastering jobs annually — 60 percent residential.

Hair says a life span of 10-12 years is more likely because most homeowners pay little attention to water chemistry. When his company is called to estimate a replastering project, usually the surface is long gone, showing delaminating or spalling.

“The No. 1 reason we replaster pools is spalling,” Hair says, describing the crumbling of the smooth pool surface.

At that point, homeowners face choosing between three kinds of new surfaces. The most common is white plaster, a mix of Portland cement and marble dust (and sometimes a dye for color).

White plaster accounts for about 40 percent of Adams’ replastering jobs and about 70 percent of those done by Peak.

Blue quartz, which contains quartz aggregate and polymer-based cement, is a step up from white plaster.

And a third choice, a premium coating, is pebble-based surfaces, which combine tiny pebbles in hydraulic cement.

Think of white plaster as hard and durable, blue quartz as harder and more durable and pebble coatings as the hardest and most durable.

LaBreche and Hair say the spring and fall are the busiest times for pool replastering in the Las Vegas Valley because it’s best to recoat when temperatures are consistently cooler than 85 degrees. Hotter temperatures can cause concrete surfaces to cure too quickly.

Most residential pools in the Las Vegas Valley are from 70 to 120 linear feet, and replastering companies use this perimeter measurement to determine cost.

Those prices don’t include spa replastering, which generally adds $500 or so more for white plaster, $600 more for blue quartz and $800 more for pebbles.

Each surface is applied with a nozzle-type “gun” that spits out material that is smoothed and shaped by hand.

Expect the job, which calls for a crew to chip out the old pool surface with power equipment, to last a week to 10 days on the short side, two to three weeks and sometimes longer for more labor-intensive projects.

Vassallo’s Paragon Pools typically does larger renovations, starting at about $40,000. While only a select number of renovations in the valley reach that level, many homeowners combine their replastering project with deck recoating or a new deck altogether.

Adding a deck, Hair says, means it’s not uncommon for a project that starts out as a small replastering job to grow to an $8,000 to $10,000 price tag.

“The pool surface and the water seem to be the focal point for most homeowners,” Peak owner LaBreche says. “People then see what they’re getting in to, and then with the deck, the tile and the lights, it can become bigger.”

Brent Hermansen said he was glad he turned over his renovation to Paragon because once he and his wife started the project, they found they wanted several upgrades.

He has some advice once homeowners choose to replaster. Understand a crew is coming to drain your pool and do extensive cement work.

“It’s a mess,” Hermansen said. “So turn over your backyard to the workers and just try to get out of their way.”