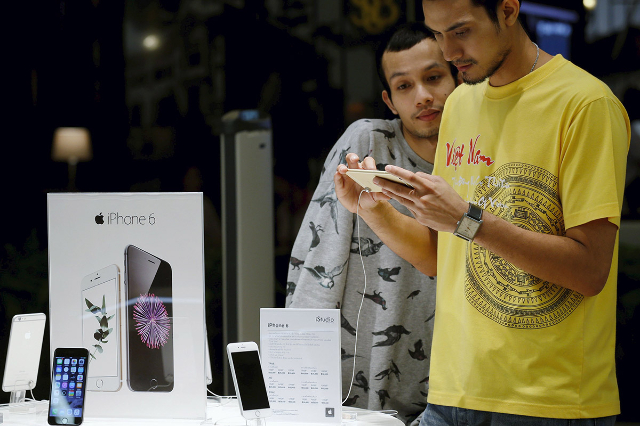 Customers look at an Apple iPhone 6 at an Apple reseller shop in Bangkok, Thailand, September 18, 2015. A significant number of Apple Inc customers are reporting their mobile devices have crashed after attempting to upload the new iOS 9 operating system, the latest in a line of launch glitches for the tech giant. REUTERS/Chaiwat Subprasom

SAN FRANCISCO/SYDNEY — A significant number of Apple Inc customers are reporting their mobile devices have crashed after attempting to upload the new iOS 9 operating system, the latest in a line of launch glitches for the tech giant.

Twitter and other social media were awash with disgruntled customers reporting two distinct faults, with one appearing to be linked specifically to older models of Apple iPhones and iPads.

“It is beyond inconvenient to not be able to use your phone for a day,” said student Pip Cordi as staff in the Apple store in central Sydney looked at her phone on Friday. “I have a lot of apps that I use for school – things like language apps and dictionaries and that’s all really important for my studies.”

Another iPhone user, Zorry Coates, said she had spent three hours in the Apple store and had been left with the option of either returning her phone to factory settings – losing any non-backed-up data – or waiting until Apple technicians announced an update.

“They said they were aware of the problem and their engineers were working on it 24/7, but they couldn’t tell me when – or how – I would get a solution,” Zorry said.

“I’m very annoyed because it’s wasted half my day. They pride themselves on being a company that’s flawless.”

Apple’s headquarters in San Francisco did not respond to a request for comment late Thursday. An Apple spokesman in Sydney said the company had no comment.

Despite any troubles, significant numbers of iOS users had upgraded; more than 16 percent, according to Mixpanel, a San Francisco, California-based analytics company, as of 4 p.m. PDT (2300 GMT) Thursday.

Charlie Brown, a technology expert at Sydney-based Cybershack, said any number of dissatisfied customers was significant in the social media era, particularly following the troubled rollout of iOS 8. Apple released several further updates to iOS8, but some of the bugs were never fully fixed.

One group of users reported that iOS 9 upgrade would fail after several minutes, requiring them to start the process over. Many posted screen shots of the error message they received: “Software Update Failed”.

That problem was likely caused by servers that were overloaded when too many people tried to download the upgrade simultaneously, tech analysts said.

“It’s like the Black Friday thing,” said Bob O’Donnell of Technalysis Research, referring to the major U.S. shopping sale day after Thanksgiving. “Some websites get creamed on the traffic on Black Friday.”

Other users, many of them with older devices, reported their devices seizing up on a “swipe to upgrade” page. The latest upgrade had been deemed by Apple as “friendly” to the older devices after the iOS 8 problems.

“Apple were saying the downloading mechanism doesn’t take as much space to download,” said Sydney-based Graham McKay, an IT support specialist.

McKay and Brown said they always advised clients to wait several days before downloading any new upgrades from Apple, Google Inc or Microsoft Corp to make sure any glitches had been found and ironed out.

Metering the upgrade, or allowing users to upgrade in waves rather than all at once, would have been a smarter approach, O’Donnell said.

“It’s a lot about setting expectations,” he said.

Apple did this week delay the release of watch OS 2, its updated operating system for the Apple Watch after it discovered a bug in development.