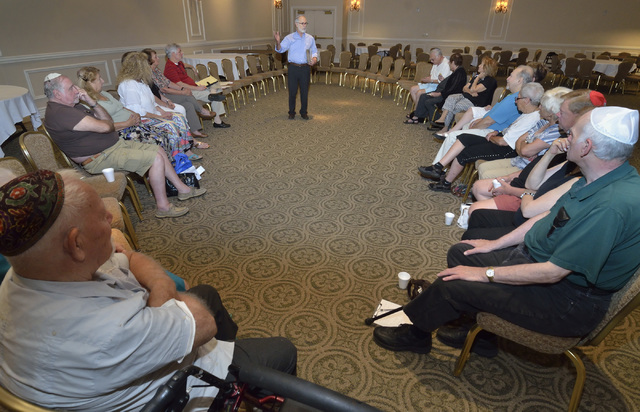 Rabbi Benjamin Katz speaks during a bibliodrama based on the story of Jonah at Temple Beth Sholom at 10700 Havenwood Lane in Las Vegas on June 21. Bill Hughes/Las Vegas Review-Journal 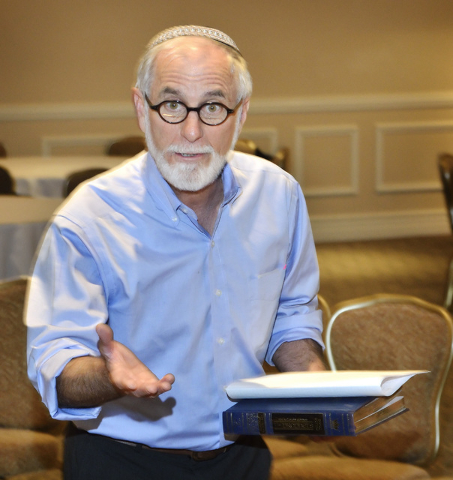 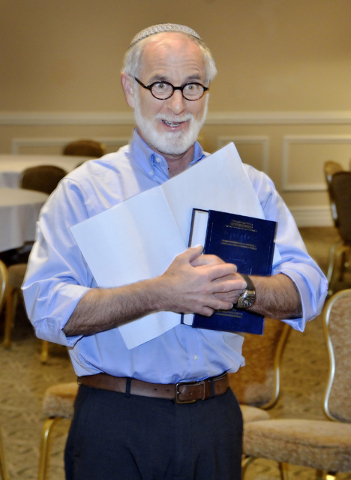 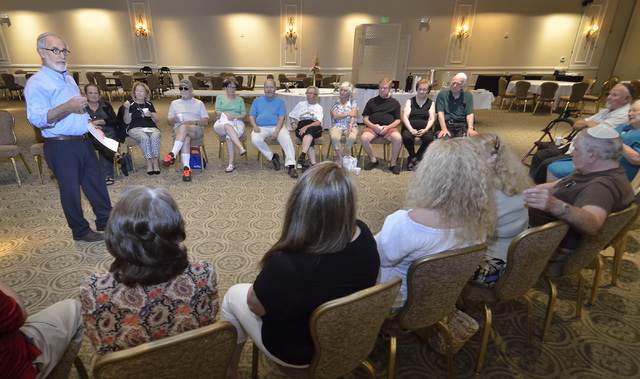 Rabbi Benjamin Katz used a bibliodrama as an additional method of improving understanding of the Bible during a recent gathering of the Active Adults 55 Plus group at Temple Beth Sholom.

A bibliodrama is a form of role-playing in which the roles are taken from biblical texts. It essentially analyzes a story while giving people a chance to better understand the Bible and their faith.

In Katz’s presentation, the role playing concerned the Book of Jonah, one of the prophets in the Bible. A small collection of attendees participated by reacting through the eyes of Jonah and a group of sailors.

Katz’s first choice for the 55 Plus group was supposed to be the story of King David, but time wouldn’t permit.

“I just didn’t have the time to prepare for the Book of David,” explained Katz. “I wanted to drop people into the story and needed more work, so the Book of Jonah was the ideal replacement.

“I knew the story pretty well because we read it on the afternoon during Yom Kippur, the holiest day on the Jewish calendar.”

The Book of Jonah teaches a lesson of God’s mercy. The prophet disobeys God’s command to preach repentance in Ninevah, and the ship he is on runs into a fierce storm. Jonah is thrown into the sea in the hopes of stopping the storm and is swallowed by a large fish, commonly described as a whale. He asks for forgiveness and is given another chance to complete his task. He succeeds in getting the people of Ninevah to change their ways, but is disappointed because he considers them his enemy. He is in for another lesson as God teaches him about mercy.

The book was broken into four parts for the bibliodrama. During each part of the story, the participants stood in the shoes of the characters, expressing the feelings of those who were often facing life or death dilemmas.

“I knew the story and got a lot out of it because we were encouraged to take the place of the people in the story,” said Michael Kantor, 74. “It was as though we were the crew on the ship. A bibliodrama teaches you to have empathy about what was going on. So many things in the Bible are unanswered and through the bibliodrama, we’re better able to remember and appreciate the story.”

Iris Fieldman Marks, a member of the 55 Plus board, also lauded the presentation.

“I thought it was terrific,” Marks said. “It really helped us step into the characters and understand the motivation and their feelings. In fact, I have spent the past couple of days thinking about the story, so that shows you how much it affected me.

“We would love for Bennie to lead a bibliodrama performance at least once a year.”

Rabbi Eitan Weiner-Kaplow, a resident of Skokie, Ill., said bibliodrama is also utilized in the Midwest.

“It’s a way to get in touch with the characters in the Bible and imagining ourselves in the same situation,” Weiner-Kaplow said. “You have wonderful conversations about how you would react to certain situations. New understandings will come from time to time while people process the experience. There is great psychology that goes into the experience and the insights that will result from it.

“This is a real specialty. I will use elements of the techniques. It is very powerful and very useful with the real issues of their lives.”

Bibliodrama was introduced in 1984 by Peter A. Pitzele, who headed the psychodrama department at a residential psychiatric hospital in New York, and his wife, Susan. The technique fit well into the Jewish concept of midrash, which also focuses on interpreting biblical stories to increase understanding. The Pitzele’s work has been shared in hundreds of Jewish and other religious congregations in the United States, Europe and Israel.

A native of Nashville, Katz has a master of fine arts degree in theater from the University of Iowa and directed plays in New York, Minneapolis and Los Angeles. He began studies to become a rabbi in 2000 and was ordained in 2009. He serves as assistant rabbi at Temple Beth Sholom.

Kantor has embraced the usefulness of the bibliodrama. “I love to learn and this kind of presentation gets us all involved in the topic or the individual.”