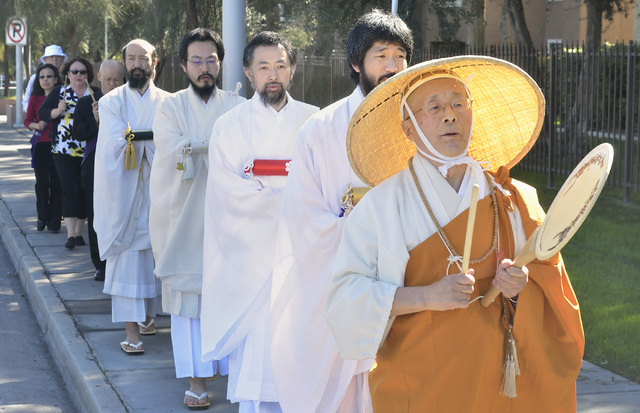 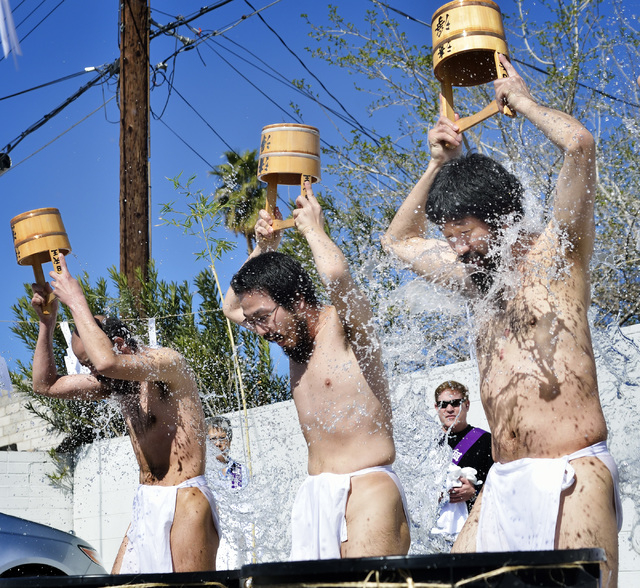 Rev. Douglas Shoda Kanai, right, takes part in a water purification ritual with Rev. Shinko Kuwaki, left, and Rev. Kanryu Ueda at the Nichiren Buddhist Kannon Temple of Nevada at 1600 E. Sahara Ave. in Las Vegas on Sunday, March 8, 2015. Rev. Kanai was participating in a ceremony welcoming him back from 100 days of ascetic training in Japan. (Bill Hughes/Las Vegas Review-Journal) 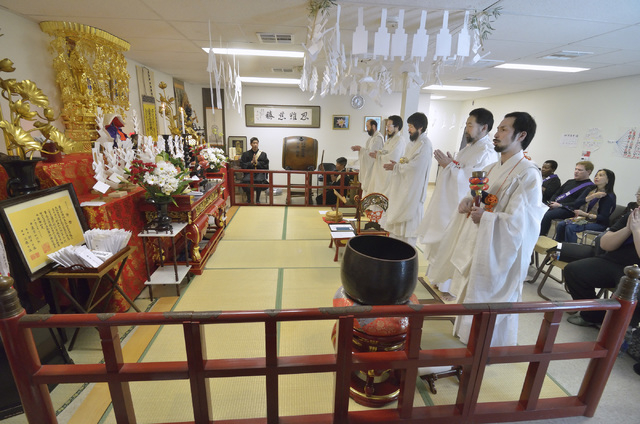 A ceremony welcoming Rev. Douglas Shoda Kanai back from 100 days of ascetic training in Japan is shown at the Nichiren Buddhist Kannon Temple of Nevada at 1600 E. Sahara Ave. in Las Vegas on Sunday, March 8, 2015. Rev. Kanai is at the center of the priests standing in front of the congregation. (Bill Hughes/Las Vegas Review-Journal) 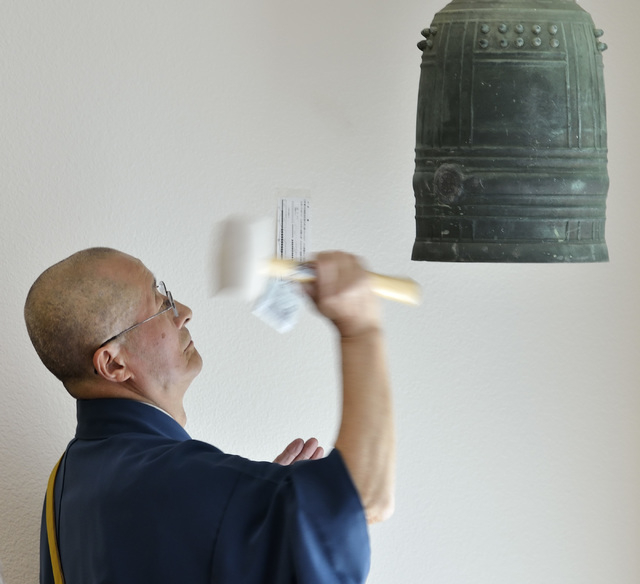 Rev. Shokai Kanai rings a bell to begin a service at the Nichiren Buddhist Kannon Temple of Nevada at 1600 E. Sahara Ave. in Las Vegas on Sunday, March 8, 2015. He was participating in a ceremony welcoming his son, Rev. Douglas Shoda Kanai, back from 100 days of ascetic training in Japan. (Bill Hughes/Las Vegas Review-Journal) 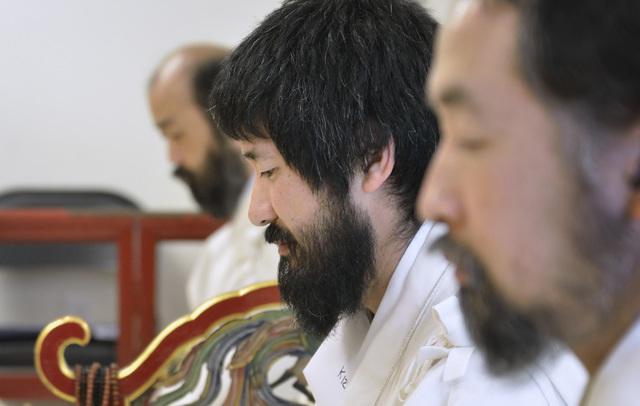 Rev. Douglas Shoda Kanai, center, is shown at the Nichiren Buddhist Kannon Temple of Nevada at 1600 E. Sahara Ave. in Las Vegas on Sunday, March 8, 2015. He was participating in a ceremony welcoming him back from 100 days of ascetic training in Japan. (Bill Hughes/Las Vegas Review-Journal) 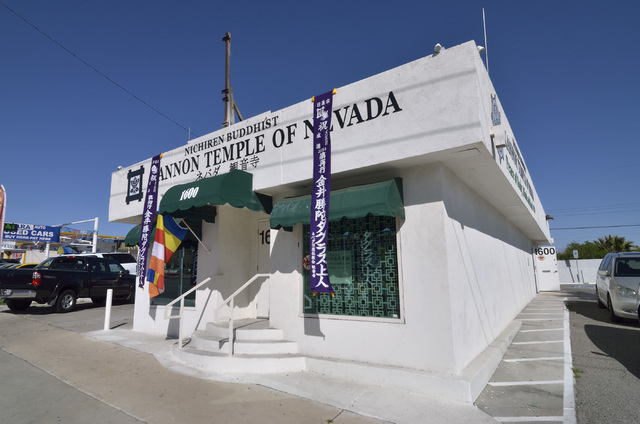 The exterior of the Nichiren Buddhist Kannon Temple of Nevada is shown at 1600 E. Sahara Ave. in Las Vegas on Sunday, March 8, 2015. (Bill Hughes/Las Vegas Review-Journal) 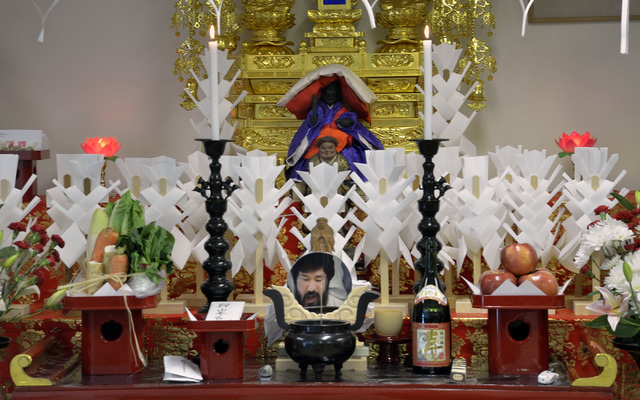 Rev. Douglas Shoda Kanai is seen reflected in a mirror on the altar at the Nichiren Buddhist Kannon Temple of Nevada at 1600 E. Sahara Ave. in Las Vegas on Sunday, March 8, 2015. Rev. Kanai was participating in a ceremony welcoming him back from 100 days of ascetic training in Japan. (Bill Hughes/Las Vegas Review-Journal) 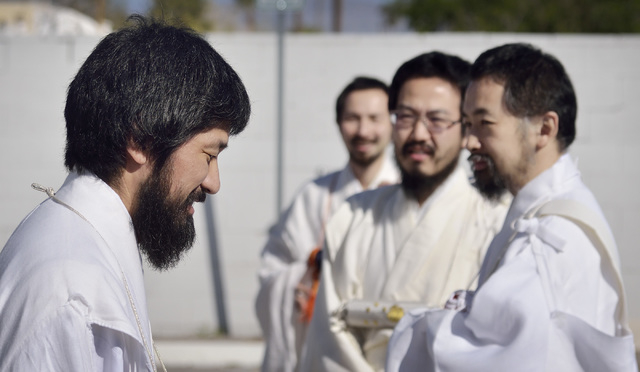 Rev. Douglas Shoda Kanai, left, is seen with some of his fellow priests before the start of a peace march at the Nichiren Buddhist Kannon Temple of Nevada at 1600 E. Sahara Ave. in Las Vegas on Sunday, March 8, 2015. Rev. Kanai was participating in a ceremony welcoming him back from 100 days of ascetic training in Japan. (Bill Hughes/Las Vegas Review-Journal) 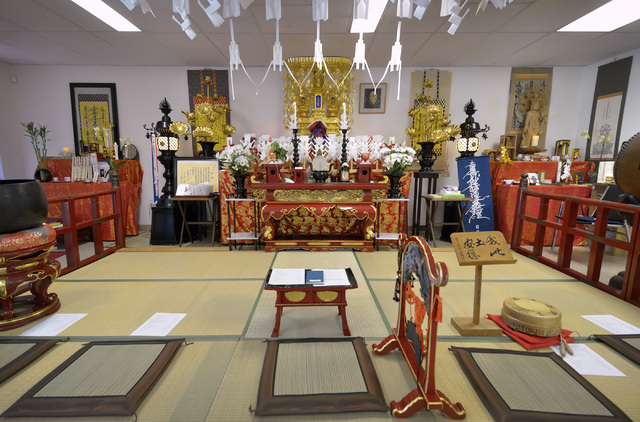 The interior of the Nichiren Buddhist Kannon Temple of Nevada is shown at 1600 E. Sahara Ave. in Las Vegas on Sunday, March 8, 2015. (Bill Hughes/Las Vegas Review-Journal)

On Nov. 1, 2012, the Rev. Shoda Douglas Kanai entered a temple outside Tokyo for the Nichiren Shu Dai Aragyo-do 100 days training.

The grueling daily schedule began at 2:30 a.m. and continued until 11:45 p.m. with participants chanting from the Lotus Sutra, undergoing seven chilly water purification ceremonies a day and subsisting on only two swift meals of rice porridge and miso soup.

Not all who began the ascetic training with Kanai made it 100 days. Some left, others were taken away for medical treatment and one man died.

Kanai was the first American-born priest to successfully complete the ordeal, and on Nov. 1, 2014, he returned and did it again.

Four fellow priests came from Japan to join in the celebration and help demonstrate the rigors of the 100 days training.

The festivities began with a peace march along Sahara Avenue with chanting and playing of Japanese fan drums. Cars sped by as the marchers made their way past apartment complexes and businesses to the small storefront temple between a used car dealership and a tax preparation business.

In the parking lot behind the temple, the visiting priests joined Kanai in demonstrating the water purification ritual. Stripped down to traditional loincloths, they chanted Verse 16 from the Lotus Sutra and used ceremonial buckets to douse themselves with chilly water.

The drenching on a warm spring day in Las Vegas was a world away from the experience in Japan.

“We’re so used to insulated houses in America,” Kanai said. “There, everything is open. All the doors are open. All the windows are open. That means there’s no heaters. So if it drops down to 34 degrees, 40 degrees, it’s cold. And there doing the water purification ceremony, we’re naked. So obviously when the wind kicks in and it’s 34 degrees …”

Despite the chill, Kanai said he had to stay tough.

“You can’t shake,” he said, “because if you shake it’s a sign of weakness. You’re losing out to the cold.”

“Not everyone can complete this arduous training,” Kanai’s younger brother Randy said as he explained the schedule to the congregation in Las Vegas. “In one day, seven water purifications, four services and two meals, and this routine goes on for 100 days.”

Voices grew hoarse as the priests chanted loud and fast to frighten demons away. That combined with the kneeling interspersed with water purification is rough on the body.

“You have no oil, no fat and you’re constantly covered in water. So any oil that comes out, you’re washing it away, so your skin just dries up and cracks,” Kanai said.

He pointed out scars from head to toe.

“I call this one the Grand Canyon,” he said pointing to a deep now-healed mark across his hand. “It split and you have all the tributaries. Your skin splits open because you’re so dry.”

So why do it, and why go back for a second helping?

“You’re washing out all the bad, and with the prayers you’re replacing it with the good,” Kanai explained. “A lot of people have a lot of sin. And it’s not just your sin right now, but your sin from the past, your bad karma. You’re washing that all away.”

The training is a tribute to Nichizo Shonin, who is said to have chanted from the Lotus Sutra for 100 days on a beach through the winter of 1293 to reconfirm his comitment to teaching in Kyoto, then the capitol of Japan.

Kanai didn’t always believe the ministry would be his path. Born in Salt Lake City and raised in Seattle, he thought he wanted a secular life. His father suggested he pursue ordination after college and then do what he wanted. As long as he had completed the training, he could always come back if he changed his mind later. So he trained at Mount Minobu, a place in Japan he likened to the Vatican. With his ministry certificate completed, he went on to earn an MBA at UNLV and work for the likes of Bellagio, The Mirage and CityCenter.

“Over the years, I always thought maybe I might come back,” he said.

As his father aged and prepared for retirement, he realized it was up to him, the oldest son of three, to carry on the family torch. Three and a half years ago he moved to Japan and worked in a temple for nine months in preparation to take on his first 100-day training.

On his second run, in addition to the services, chanting and water purification, he added kitchen duty. Second-years take on the task of keeping the temple running.

“I wanted to sleep so bad, but you just don’t have time to sleep,” he said. “Cleaning pots and pans for 144 people, you’re cooking, making everything. It’s very exhausting.”

Inside, his hair and beard grew long because scissors, razors and knives are not permitted. He said the precaution is necessary to prevent injury.

“People go crazy because you don’t eat, you don’t sleep,” he said.

Even with the 100 days complete, the dangers don’t end. Priests are asked to participate in welcome-home ceremonies outdoors in Japan in the winter.

“They add sake to the water to keep it from freezing,” Jan Louy said. She was invited to photograph the ceremony in Japan and also traveled to Las Vegas to see Kanai’s return.

Kanai said the sake helps to keep the men from cutting themselves on the shoulders with ice.

He said most who die from the training die in June. He speculated that it’s a combination of cold exposure reducing the body’s ability to sweat and binging on fatty foods after near starvation that proves fatal for most.

After his welcome-back ceremony, Kanai returned to Japan to continue accelerated courses at Mount Minobu. He plans to return in April. Then on June 7, an installation ceremony is set to transfer leadership of the Nevada temple into his hands.

Kanai said while he hopes to carry on his father’s teachings, things will be different when he’s in charge. He hopes he can help people understand the complexities of the faith in simple terms, from likening his ceremonial sword to a Jedi Knight’s lightsaber to drawing up comparisons with exorcists.

“Being a native speaker helps,” he said. “Since I’m American, I understand Americans. I can speak the lingo and use pop-culture terms that people may be able to relate to.”

The soonest Kanai could return to Japan for another 100-day training is 2016. As for a fourth trip, “We’ll see,” he said.