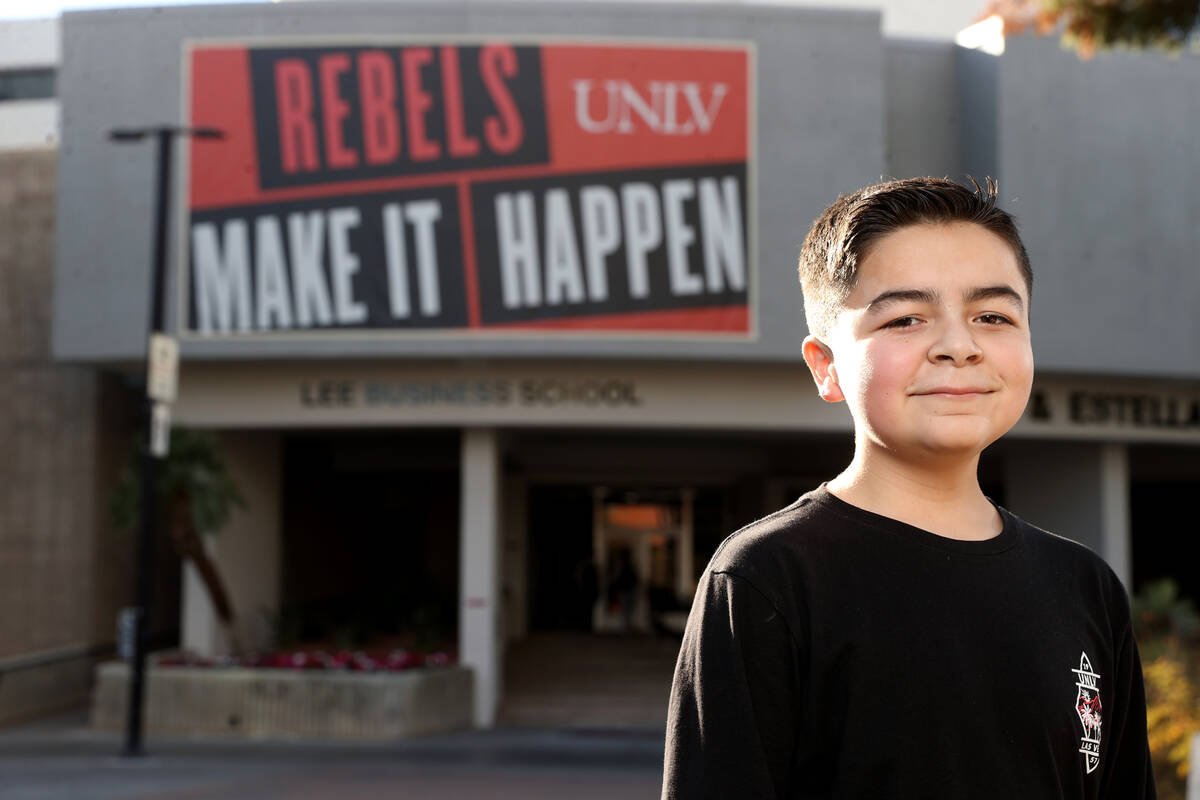 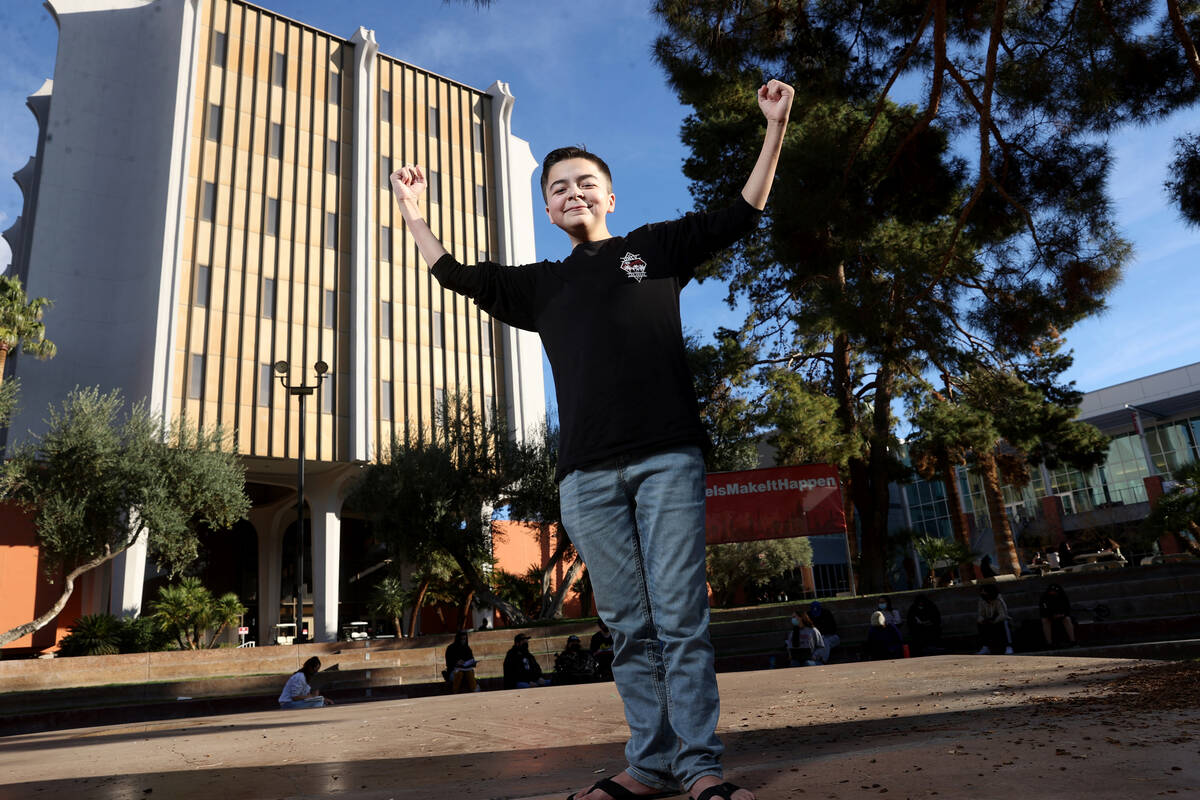 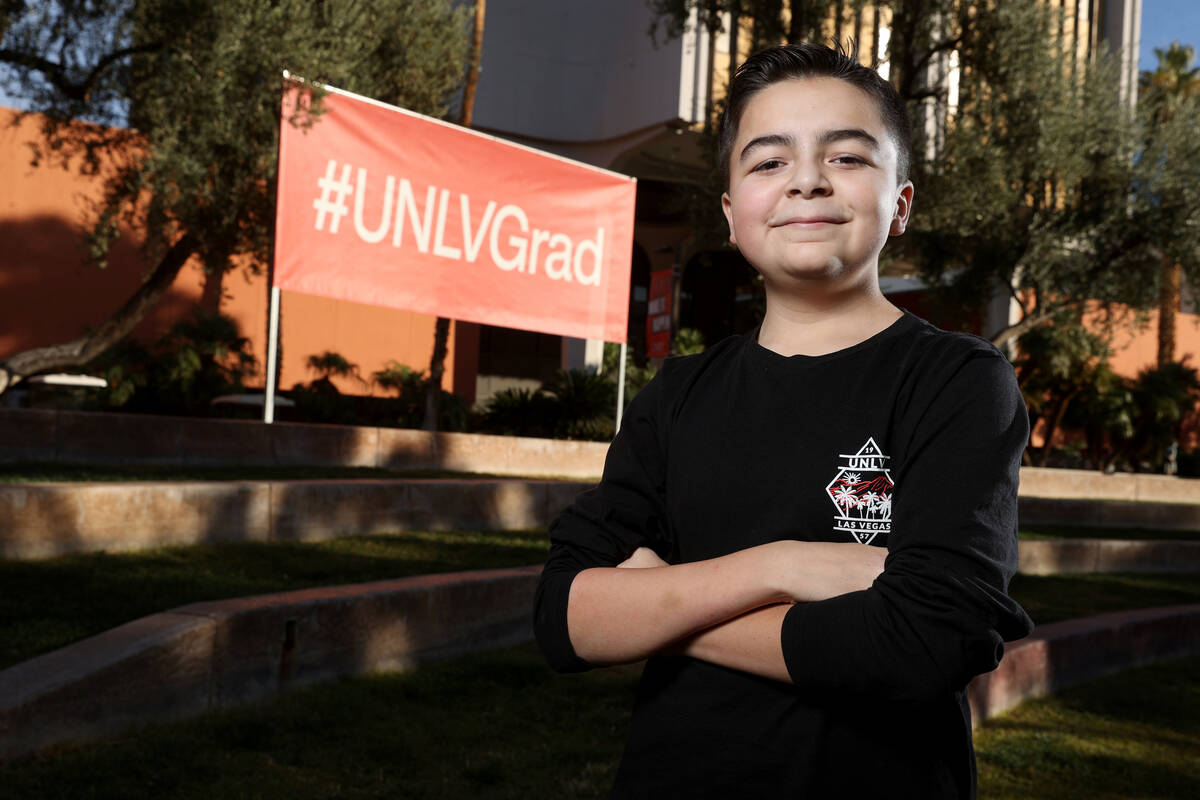 Long before he can vote, 15-year-old Jack Rico will earn a bachelor’s degree with honors from UNLV this week, possibly making him the youngest student ever to graduate from the university.

Jack, who lives in Huntington Beach, California, when not in Las Vegas, is graduating with a 3.78 grade-point average and a degree in history. He’ll be one of about 2,200 students eligible to participate in winter commencement beginning at 4 p.m. Tuesday at UNLV’s Thomas &Mack Center.

He told the Review-Journal last week he feels “euphoric” about his upcoming graduation.

“It’s sad, but also relieving,” he said of the long but relatively fast journey through home schooling and community college to get to UNLV and graduation.

UNLV has seen other students begin their college education while still in middle school, but it’s a rare occurrence. University spokesman Tony Allen said it’s not clear whether Jack will be the youngest graduate in the school’s 57-year history.

Jack began taking classes at UNLV when he was 13, right after he graduated in spring 2020 with four associate degrees from Fullerton College, a community college in Southern California. In addition to carrying a 4.0 GPA, he was the youngest graduate in that school’s history.

He toured UNLV’s campus during one of his family’s frequent trips from Southern California to Utah and was sold.

After taking his first class remotely during summer 2020 amid the COVID-19 pandemic, Jack attended classes in person this year.

Just like at Fullerton College, he said his professors and classmates at UNLV were “very accepting” of him and didn’t treat him like a kid.

Jack, who describes himself as a “major history buff,” said there was never a dull or bad moment at UNLV, noting his classes, professors and the campus environment were “all really enjoyable.”

What’s next for the teenager? He wants to earn a master’s degree but in a field other than history.

In order to explore his interests, Jack plans to take classes at UNLV in other areas like computer science and business before making a decision.

There were signs from a young age that Jack was intelligent, said his mother, Ru Andrade.

For his fourth birthday, he wanted to see the White House. His parents said he could go if he memorized all of the U.S. presidents.

He did — and he rattled off the names of all the vice presidents for good measure.

Jack always excelled in school but struggled in third grade when Common Core State Standards were introduced, Andrade said. Concerned that he was failing in English language arts, she asked his school to test his IQ and the score came back extremely high.

“That took us looking into home schooling,” Andrade said, noting she figured they’d try it for a year to see how it went.

By the second day, both she and her son realized it was the right fit, as they were able to wrap learning around Jack’s interests, including history.

“By 11 years old, he was already smarter than me,” Andrade said.

She said she wasn’t sure what to do next, until Jack took a placement exam at Fullerton College through a program for kindergarten through 12th-grade students who can demonstrate they’re capable of handling college-level material. He passed.

He began taking college classes when he was 11, starting with one class the first semester and gradually worked his way up to a full course load.

Jack wasn’t sure what he wanted to study, so he took classes in multiple majors with overlapping requirements so he wouldn’t lose credits if he changed his mind, Andrade said.

About two years later, in spring 2020, he graduated with four associate degrees — in history, social sciences, social behavior and self-development, and art and human expression — and a perfect 4.0 GPA.

UNLV was the first campus Jack visited when he was considering where to continue his education and he loved it. Attending school in Las Vegas, though, required sacrifices by his family.

Andrade and Jack’s sister, 16-year-old Julia, who also is home schooled, drove with him to Las Vegas each week and stayed for a few days while he attended classes. His father, Ricky Rico, remained in California to work.

Initially they stayed in hotels, but sometimes spent hours waiting in the car until they could check in.

But last year, a local realty group heard about Jack’s story and contacted Andrade to offer an apartment for rent at a discounted rate. And this semester, the family stayed with a friend who recently moved to Las Vegas.

Academically, classes at UNLV were more challenging for Jack than he was used to at community college, Andrade said, and he loved it.

He has earned only two “B”s during his time at UNLV, including one during his first semester. Andrade said that was “really good for him” because it gave him a little extra motivation.

UNLV history Professor Paul Werth had Jack as a student in two classes — terrorism in the Russian empire and World War I.

He recalls being a little surprised by Jack’s age, but still called him “Mr. Rico.” Werth said he’s “quite old fashioned” and calls his students either “Mr.” or “Ms.”

“I would say that he describes himself as kind of a quiet student,” Werth said, adding that he got the sense that his young student was taking it all in at first. “I’ve pushed him a little on participation.”

Werth said he felt there was a connection between him and Rico where they appreciated each other.

But Jack was a “very solid” and curious student who was attentive in class, Werth said, and he was “definitely on the higher end” with his grades, performance and mastery of the material.

Werth said he was determined not to treat him differently than any other student. UNLV is a diverse campus and that diversity takes a variety of forms, he said, including age.

Apart from academics, Jack is a typical 15-year-old boy, Andrade said, noting her son is a self-proclaimed “video game nerd.”

He has about 10 cousins who are close in age and they spend time together. And he enjoys bike rides, beach volleyball and writing crime-related screenplays.

Jack gets attention for his academic accomplishments, Andrade said, but noted he’s also wonderful with his sister who has autism.

“I think his heart is the coolest thing about him,” she said proudly.