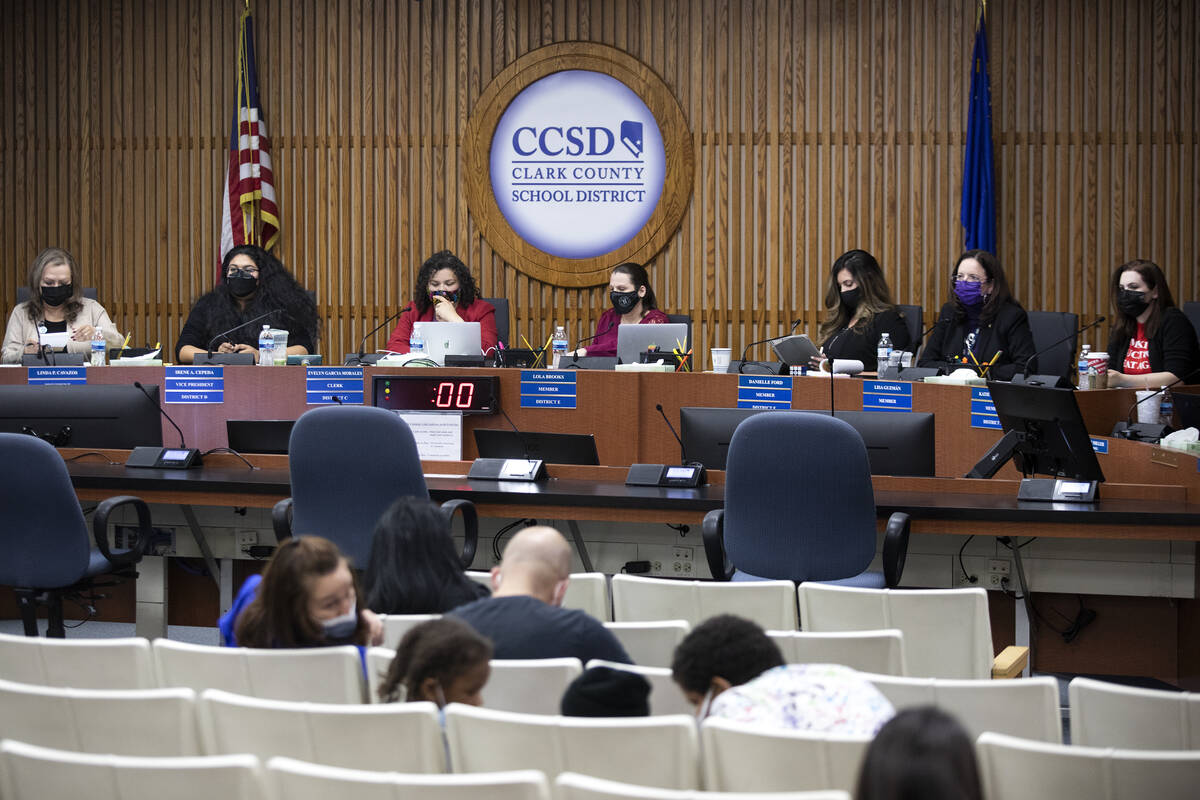 The Clark County School Board took steps Friday to move forward with looking at school violence issues amid community concerns about recent incidents.

It comes as the school district has seen an uptick in serious fights and other disciplinary issues among students since the school year began, with more firearms confiscations and citations issued during fall semester compared with pre-COVID-19 pandemic, but fewer arrests.

Earlier this month, a student at Las Vegas High School allegedly attacked a classmate and was cited for battery, according to Clark County School District police. A video was circulating online that showed the girl punching another girl multiple times during class.

Last week, a handful of students provided public comments during a School Board meeting to voice concerns about school safety.

The board voted 4-3 on Friday to add a discussion-only item to the March 10 regular meeting. Trustees Katie Williams, Lola Brooks and Evelyn Garcia Morales voted “no.”

The board requested for topics to be covered such as historical context of what has been done in the past, information on current policies and for data to be included with online reference materials, including the number of violent incidents in the last month.

Board President Irene Cepeda said she knows school safety is a large topic and she wanted to ensure the board was clear about expectations in order to give district staff clear direction for the upcoming meeting.

“It’s important to us all and I want to make sure we get it right,” she said.

There was some disagreement among trustees about logistics of moving forward. Some trustees also said they were confused by the way the motion was worded or thought it was too broad.

Cepeda said board officers would convene after the March 10 regular meeting to come up with a plan for next steps that will then come back to the full board for a vote.

Superintendent Jesus Jara said he needed to know what data the board was requesting for the meeting, noting he wants to meet their expectations.

He said he doesn’t want to continue delaying the conversation around school violence, also noting a lot of work has already been done around the topic.

“I just need clear direction from the board as a whole,” Jara said.

After discussion among trustees, board attorney Nicole Malich said they needed to return to the original motion and that it was lacking clarity. “Let’s try to wrap that motion back up and vote on it.”

Brooks said she felt the motion wasn’t clearly defined for district staff and was way too broad.

She also said she’s concerned that if the board reviews current policy, it’s not an action item. She said it may have also been helpful for trustees to know what specific policies could be covered.

Cepeda said after the vote that she wanted it to be clear the entire board is committed to ensuring school safety.

In an email response Feb. 7 to Cavazos’ request for a special meeting, Cepeda thanked her “for amplifying this important issue.”

“This topic requires a special meeting where School and Student Safety can be the sole topic of conversation,” she wrote. “Can I suggest that, maybe this item looks like a community meeting or a forum? The district could present, we could bring in other key community members to align our work.”

In a response, Cavazos wrote she’d prefer to stick with her original request for an item on the Feb. 24 meeting agenda.

“This topic is something that our community needs to see us addressing now, even if it’s just a first step,” she wrote. “The concerns are huge, as it’s a problem that did not happen overnight.”

“I’m sure you have viewed the poor student that was bludgeoned in the head by a fellow student,” Guzman wrote in her request.

During Friday’s meeting, Ford said the board should encourage the public to share what’s happening and offer solutions, noting many aren’t available to participate in a meeting at 8 a.m. on a Friday.

Ford said she also wanted to ensure the board isn’t muddying down the item by calling it “school safety” since that could include anything from transportation to bullying.

The trustees who requested the agenda item are talking specifically about violence in schools, she said.

Guzman requested a definition of violence and how that’s categorized within the district.

Guzman said she’d also like to include the Clark County School District Police Department in the conversation.

She said trustees hear quite often about the use of pepper spray on campuses and knowing how it’s used would be helpful, noting she’s sure it’s used only in extreme instances.

Williams said she recently attended a youth event where they talked about violence in schools.

She said a small group of students — fewer than 10 — were involved, but topics raised hit on recurring themes that come up during public comments at School Board meetings and during school visits.

She also said she’d like for a member of CCSD police to do a presentation for trustees about their processes and procedures.

Brooks said she agrees with her colleagues that it’s an important topic. She said she doesn’t think the structure of a board meeting would be conducive to the kind of conversation it warrants, particularly, a two-way conversation with the community.

She said she also believes school police need to be involved in the conversation and that an overview of historical information should be presented to help trustees catch up.

Brooks said she thinks the community wants assurances the school board is taking the issue seriously and will dive in deeper. “We need to do the work.”

Garcia Morales said it’s abundantly clear to her that incidents in the last few weeks have shaken the community. She said she’d like some sort of community meeting rather than an agenda item at a regular business meeting.

Marie Neisess, president of the Clark County Education Association teachers union, said violence in schools has significantly increased across all grade levels, but also noted there are programs to help address aggressive behaviors.

In addition to added responsibilities already being placed on educators, are they supposed to act as school police? she asked.

Educators are dealing with increased violence by students and aren’t sure what the procedures are for dealing with aggressive behaviors, Neisess said.

Every time a fight happens in a classroom, students are negatively affected, she said. “Educators want supports put in place that are effective.”

There need to be non-vague procedures that are followed by every school, Neisess said.

Parent Anna Binder said she likes the idea of reaching back out into the community and inviting the public to discuss the topic, similar to what the district did last year during the redistricting process.

Binder said she’s disheartened the topic could be included during a regular business meeting because she doesn’t want it buried among other agenda items. “It needs to be a priority.”

M.J. Ivy, pastor of Kinship Community Church, said he served on a school district safety committee, and the topic has been discussed exhaustively and the group came up with specific answers.

A grandmother of 20 said it’s important to talk with the community about violence in schools and not gloss over the topic.

She said her grandson, who’s now a freshman in college, was attacked at Arbor View High School and she doesn’t want her next set of grandchildren to go through the same thing.