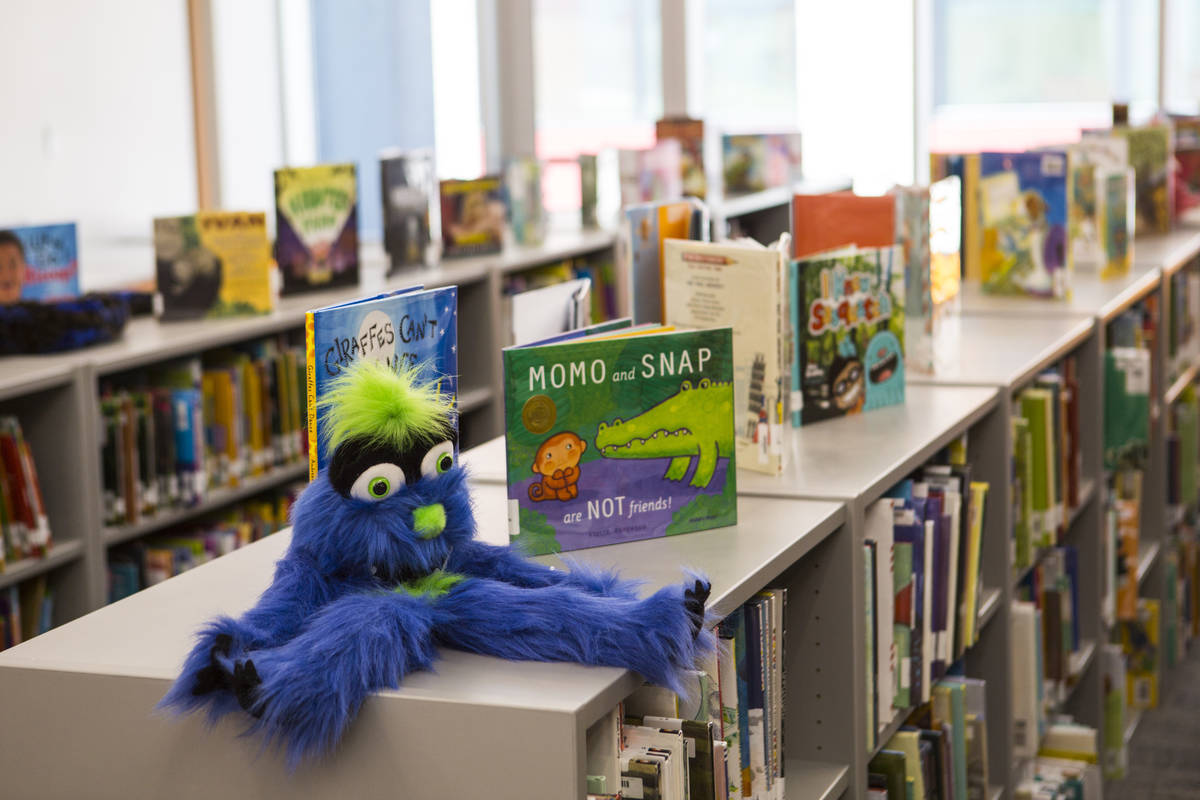 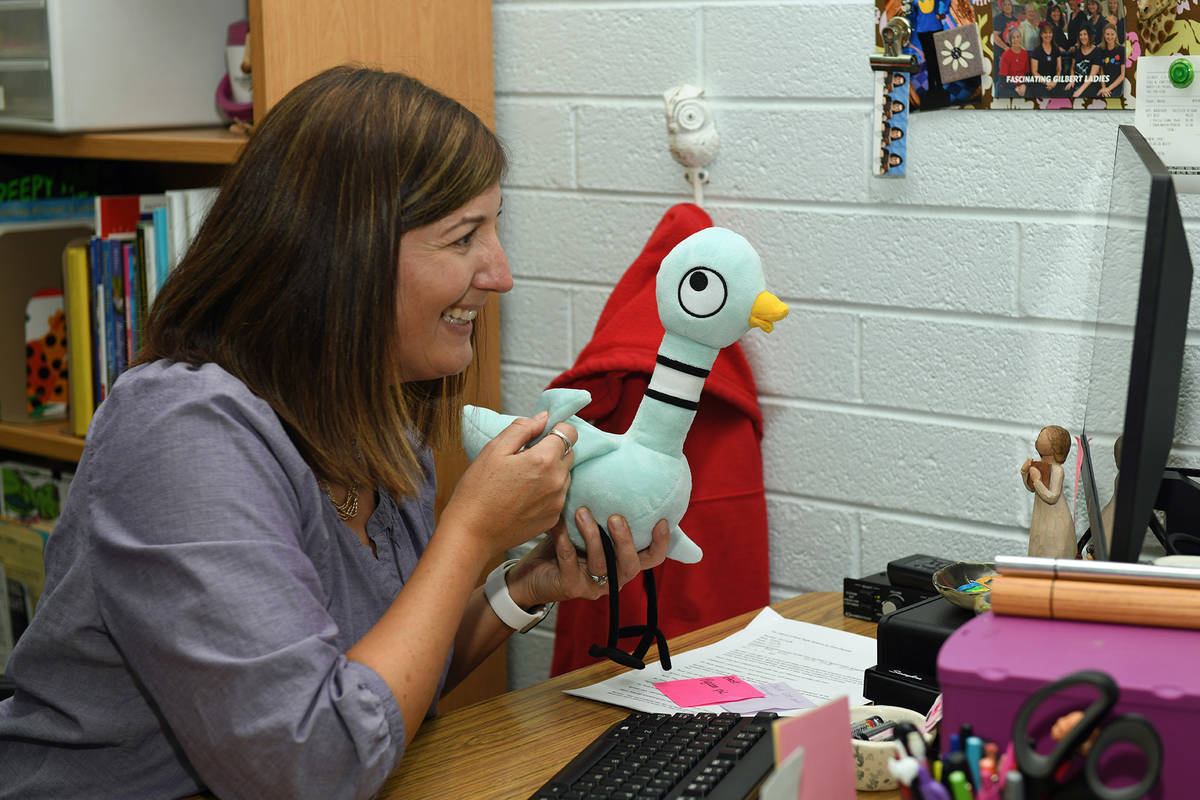 Wendy Payer juggles a busy schedule in the library at the Gilbert Academy of Creative Arts in North Las Vegas. (Wendy Payer)

A new Clark County School District policy requiring schools to maintain effective libraries has the potential to improve the district’s lagging literacy rates — but critics say it runs afoul of the 2017 law reorganizing the district to put more budget control into the hands of school administrators.

Approved by the school board in December, the new library policy will require schools to fill library roles with certified teacher librarians — licensed educators who have additional qualifications, like a master’s degree in library science. There is no date yet set for the change.

The support from trustees and community groups didn’t go far enough for some advocates who wanted to strike the exception that allows schools to temporarily fill the positions with other licensed educators if a certified librarian couldn’t be found.

Critics, however, see the policy as another shot across the bow in the battle against the reorganization law, which handed hiring and budgetary powers to individual schools. Particularly in a time of impending state budget cuts, they fear that even a well-intentioned boost to libraries will come at the cost of another needed program, a counselor or a classroom teacher.

Cuts to education spending appear likely, given the state’s coronavirus budget crunch, but it’s hard to predict what form they could take.

While the special session last summer left per-pupil funding intact in favor of cutting funding for specific student groups, that may not be the case when legislators meet again this year, said Kenneth Retzl, director of education policy at the nonprofit Guinn Center for Policy Priorities.

Even if education is spared, there are other anxieties on the horizon: uncertainty over whether school buildings will reopen this year, a pattern of declining enrollment and a new funding formula that some want to see put on pause.

For principals making hiring decisions, a librarian shouldn’t be an either-or, but a “yes-and,” Retzl said.

“But it’s a function of funding, as everything is,” he said.

In a preliminary analysis of school librarians and literacy rates at CCSD elementary schools, Retzl found that the presence of a librarian raised expected English language arts proficiency scores by around 2.4 percent. The correlation did not appear to continue at the middle and high school levels, but Retzl said that might be due to a lack of comparable data at the secondary level.

For middle schoolers, there’s likely a cumulative positive impact of having a librarian in elementary school, he noted.

Studies from other states also suggest an amplifying effect, Retzl said: While just the presence of a librarian has a positive effect on reading and math scores, there are further gains to be had at schools with strong libraries that integrate librarians into school leadership teams.

“My guess would be that if we looked at individual school programming and included that in the model, the results would be even stronger for those schools that effectively leverage the librarians’ skills,” he said.

Wendy Payer, who juggles a busy schedule in the library at the Gilbert Academy of Creative Arts in North Las Vegas, says the job has changed during the information age.

Half her time is spent teaching: one lesson to 30 classes for each grade covering Nevada standards on research, literacy and reliable sourcing in an age of mass disinformation.

The other half is spent keeping up the library collection on a budget of $8.77 per student per year. That’s the full recommended allotment, she said, noting that the school has been overwhelmingly supportive of the library.

In past jobs, she’s made do with much less while weeding out damaged and outdated books and ordering new books that her students clamor for — like “Dogman” and “Captain Underpants” series.

An aide, meanwhile, manages check-ins and check-outs, reshelves, repairs and cleans the books — itself a full-time job, according to Payer. With many schools staffing their libraries with an aide alone, she said she wonders who’s left to do everything else, including advocate for the library at school budget meetings.

“It’s so important that a certified teacher librarian is in the position, not only to teach our kids information literacy, but to develop a diverse, rich collection that is relevant to what they care about and what their world is like,” she said. “My concern is that anyone who’s not trained in this job, that that part is not going to happen because they don’t have time.”

Among the 109 Clark County schools that don’t have a librarian, there are four “feeder chains” in which a student would not see a librarian during their entire K-12 career — a statistic spotlighted by Trustee Chris Garvey at a recent School Board meeting.

This has a compounding effect in areas where public libraries are not readily accessible, Garvey said in a later interview. The district’s reading scores were suffering long before the pandemic, but she fears COVID-19 has only made the problem worse.

Garvey said the library policy also aims to restore some monitoring lost during the reorganization. She cited ensuring that licensed educators — not aides — are in charge of the library and that mandatory reports, such as listing books in need of replacement, are getting done as examples.

While schools receive funds intended for librarians and libraries — not a windfall by any means, Garvey concedes — the money is considered part of the strategic budget and can ultimately wind up in the carry-over pot at the principal’s discretion.

She said she understands the concerns of principals who are working with tight budgets and bracing for future cuts. But the reorganization that gave them great power also granted great responsibility, she added.

“We have to have a conversation about what we value,” Garvey said. “If your school is not meeting these standards, we have to say, ‘This is what you need to do.’”

Still, Garvey said the district is not looking to throw a wrench at school budgets. There will be a task force to work out what kind of training will be offered to aides currently working library roles, and a transition period to allow principals to make their hires. Some 400 teachers have a library certification theydon’t use due to a residual fear that specialists are first on the chopping block when budget cuts arrive, Garvey said.

As a result of the summer’s cuts to categorical funding, CCSD lost around $73 million, making it up only by offloading utilities costs to its federal emergency fund. In November, Gov. Steve Sisolak indicated that state agencies should prepare to cut more, though about $477 million in federal aid for Nevada schools could help the state’s education system weather that storm.

Looking ahead, schools like Del Sol High are anticipating losing up to 12 teachers, said Paul Kleemann, a school organizational team (SOT) member and guitar teacher. If those cuts coincide with a library mandate, Kleemann said, he fears the school could be down 13 classroom teachers, pushing class sizes up to more than 40 students each.

Del Sol has been a good steward of its budget, he said, even supporting his elective music program with new instruments. In SOT meetings, Principal Greg Misel has proposed a plan to save most positions next year. But the measures wouldn’t forestall a grim economic forecast.

“It creates a culture of the principal saving as much money as possible because every school year we have to start out making cuts,” Kleemann said. “We could dodge a bullet one year, but if they make all these cuts, we’re going to be in trouble again.”

Del Sol’s approach to the library has been to create a technology center, with a focus on open spaces for collaborative work between up to three classes, as well as access to carts of Chromebooks and iPads. A support staffer operates it, Kleemann said.

Running afoul of the reorg

Giving principals the ability to make decisions based on the needs of their students was the purpose of the reorganization law, said Ed Gonzalez, an architect of the CCSD reorganization law for Assembly Republicans, who now sits on the school organizational team at Hickey Elementary School. He joined the opposition to a version of the library policy that came before the Legislature in 2019.

At Del Sol, the prevailing need might be a technology center. For the Southwest Career Technical Academy — as SOT member Julie Williams put it to the school board in public comment — the need is math and science, rather than reading. Interfering with that focus could negatively impact students.

“Schools differentiate to meet the needs of their students,” Williams wrote.

Gonzalez said Hickey has opted to hire two reading specialists to address the needs of its students, nearly one-third of whom are English learners and 100 percent of whom qualify for free and reduced-price lunch. The standards of research and information are incorporated into reading lessons, he said.

“If it doesn’t work, we would change it,” he said. “If you choose not to have a position, you should still have to incorporate that standard and show how you do it.”

He said the district’s adoption of the policy signals a return to the top-down approach of trying to solve a problem.

“It’s well-intentioned, but it doesn’t work on the local level,” Gonzalez said. “You’ve taken away the option, and you’re left with a policy that will affect other parts of the school community.”

The policy has other immediate effects, he said, including an outsize impact on rural and elementary schools, which operate on a tighter budget than urban high schools and might be less able to absorb the costs. Furthermore, educators who want to earn their library specialization may find it harder to do so in-state as the library science program at University of Nevada, Reno winds down, Gonzalez added.

Mandating a position also has the potential to pit teachers against each other when cuts are handed down, which could happen as soon as the Legislature meets again in February, Gonzalez said.

“Schools should have control of what they pick,” he said. “We all want more librarians if there’s more funding for them.”