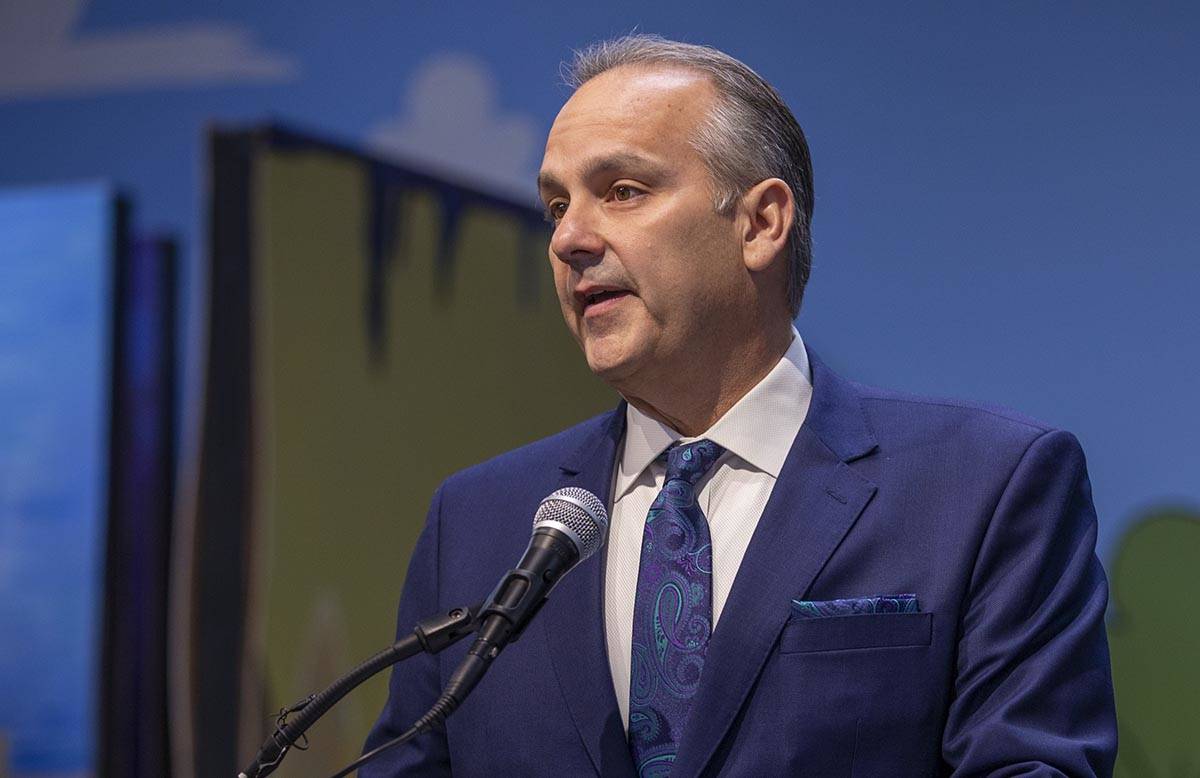 Over the summer, the school board voted to change the district’s grading policy. It will allow students to revise assignments and retake tests, and will eliminate some behavioral factors like attendance and participation from grades.

But some have opposed the changes, saying they lower standards for students.

Jara said he’s proud of the school board for taking on grading reform. The new policy will allow all children — whether they’re in Moapa, Laughlin or “the core of Las Vegas” — to have the opportunity to demonstrate what they learn and know, he said.

“It is not about lowering the standards,” Jara said. “Again, (it’s) holding children accountable to demonstrate what they know.”

Some principals are already doing work around grading reform, he said, noting the district will lean on their expertise.

Jara said he wants to make it clear that grading reform isn’t beginning next week when school starts and it will take some time to make the transition.

During the back-to-school kickoff event Tuesday at Wynn Las Vegas, Miles Mitchell, a senior at Cimarron-Memorial High School, was master of ceremonies.

Members of the public weren’t invited to attend in person, although school administrators were in attendance. The event was livestreamed online.

New licensed employees in the school district began their year July 28 and returning educators head back Wednesday. Monday is the first day of school for the nation’s fifth-largest school district with more than 300,000 students.

The back-to-school event didn’t include logistical details about how reopening will work amid rising COVID-19 case numbers — particularly, driven by the delta variant.

A number of commenters on the Facebook livestream, including parents, said they wanted to hear about plans for the upcoming school year instead of looking back on last year. Questions included whether school will still start Monday as scheduled and safety protocols for students.

During his keynote address, Jara talked about new initiatives and facility projects that are upcoming in the school district or happened within the last year.

The school district is partnering with Howard University, a historically Black university in Washington, D.C., around urban district leadership and diversifying the pipeline.

As for facilities, Jara said a new campus will open during the 2022-23 school year that will house Global Community High School, a school for new immigrants, and a high-tech high school focused on work readiness.

“Our kids will graduate from this high school ready for the workforce in high-paying jobs,” he said.

The district previously proposed eliminating ninth and 10th grades from Global Community, drawing public criticism. And in 2019, school advocates voiced opposition to sharing a campus with a workforce development program.

During his address, Jara also highlighted a new state law that will allow the school district to issue bonds through 2035 without voter approval for facility projects. The district plans to build 13 new schools and renovate 33.

Looking back on last school year

Before showing a video with highlights from the last year, Mitchell said the district faced many challenges. “Everyone in CCSD pulled together and worked with our incredible partners in the community.”

The video included statistics such as 247,182 Chromebook and netbook laptop computers distributed to students, 18,388 students provided with internet connectivity through hotspots and Cox Communications, and 26 million school meals served.

It ended with a note about bringing students back to campuses in three waves starting in March — eventually, for five days a week of in-person classes at elementary schools and under a hybrid schedule for middle and high schools.

While looking back on the pandemic, Jara said: “COVID tore us down. Believe me, there were days for all of us that were tough. But you know what? They never broke us. COVID never broke us.”

Addressing the school district’s approximately 42,000 employees, he said, “Thank you for your commitment because together we triumph for our children.”

Jara talked about mental health support provided to children, but noted the district lost 24 “precious lives” through self-harm during the pandemic.

His presentation was interspersed with video clips, including a few national stories featuring school district educators and students. That included Joel Bradley, a student success advocate at Mack Middle School who went door-to-door during the pandemic to help connect families with resources.

As he highlighted accomplishments, Jara said, “The hard work of the Clark County School District continued through this pandemic.”

Stuart Udell, Achieve3000 chief executive officer, said he appreciates the leadership and heroism people in the school district showed to reinvent school in the face of adversity during the pandemic.

“I think, though, that in spite of the trifecta of challenges we had with the pandemic, some economic crisis along the way and some civil unrest along the way, it really provides us with an inflection point as educators to think about where we go,” he said.