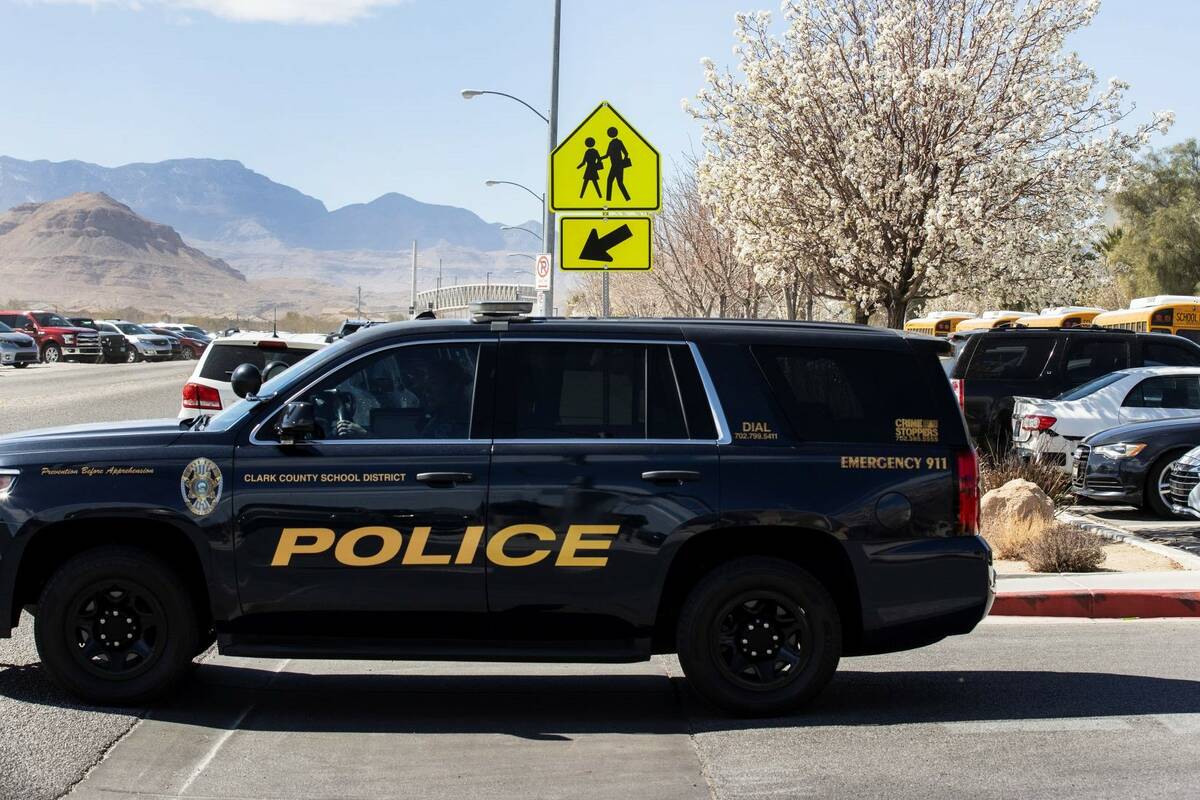 The Clark County School Board heard a presentation Thursday night about school violence — a topic that has been drawing community concern amid fights on campuses.

On the meeting agenda, the information-only presentation was labeled as regarding “a safe learning and working environment.”

Superintendent Jesus Jara said he doesn’t tolerate what’s happening to students and staff with violent acts and that the district will take action.

Children also cannot be in the streets, he said, noting the importance of community services.

Jara said he’s meeting with high school principals next week as they requested.

The district has to address the needs of children, as well as staff safety so they’re able to teach, he said.

This week, Desert Oasis High School was locked down on two consecutive days. On Thursday, multiple fights resulted in the arrest of a man and a juvenile, and nine juvenile citations.

Last month, a video posted online showed a student at Las Vegas High School — who was cited for battery — punching a classmate multiple times during class.

Some trustees said last month the motion was too broad or unclear. And many said they wanted to see community meetings scheduled on the topic.

Board officers will meet to create a proposal for community meetings and that plan is slated to come to the full board March 24 for a possible vote.

During a presentation Thursday, school police Chief Henry Blackeye said the department’s motto is “prevention before apprehension” and that the Clark County School Justice Partnership fits well with that.

The justice partnership, announced by the district in 2018, aims to keep children who have a minor infraction out of the juvenile justice system by handling discipline through alternative practices.

The purpose is to reduce the school-to-prison pipeline and minimize instances of interrupted education, said Brigid Duffy, co-chair of the partnership and chief of the juvenile division of the Clark County district attorney’s office.

Duffy said what she’s seeing with juvenile cases coming through is the violence is more intense, empathy is lacking and there’s a lack of respect for those in leadership roles.

A lot of what is coming through is a mental health issue, she said.

As for school police, 23 firearms have been confiscated on campuses this school year, according to the presentation.

The department noticed an increase in use of force incidents on campuses and determined it needed to update its policy and provide more de-escalation training to officers, school police Lt. Bryan Zink said.

The department has since seen a drastic decrease in the use of force on students, he said.

This school year, 76 uses of force have been reported. Of those, 51 were pepper spray deployments, two were Taser deployments and the rest were hands on.

Blackeye also said 75 percent of officers have received crisis intervention team training and the goal is to reach 100 percent by the end of the calendar year.

School police received 6,154 calls for service with reports of violent acts from the first day of school Aug. 9, 2021, through Feb. 9, according to online meeting materials.

Of those calls, only about 1,500 resulted in a disposition of arrest, a citation or police report being taken.

This school year, the categories with the largest number of calls were 2,487 for “harassment/threat,” 1,469 for a fight and 1,428 for assault or battery.

Of the fights reported thus far this school year, 32 resulted in arrests and 317 in citations, according to the presentation.

Board and trustee comments

Trustee Danielle Ford said she wants to focus on things happening now, citing incidents this week at Desert Oasis, which is in her trustee zone.

“How can we help that school right now?” she said.

Ford said the phrase “rigorous education” was used in the conversation about school violence, but doesn’t think that has any place in the discussion.

While it’s an important topic, she said she can’t imagine a student would cite a lack of rigorous education as a reason for violent behavior, noting reasons could instead be a lack of supportive adults or connection.

“We need to be focusing on the whole child,” she said.

Trustee Lola Brooks said it has been a tough couple of years and tensions have risen. Also, a lot of students have regressed in social skills and it’s noticeable, she added.

Obviously, everyone cares about school safety, she said, but also noted it’s not an issue that’s going to be solved in a policy.

There’s clearly not a lack of commitment or trying, Brooks said.

Mental health struggles and continued stress are spilling into classrooms, she said, adding the problems exist in the community and schools inherit them.

The school district cannot solve every problem by itself, Brooks said.

Marie Neisess, president of the Clark County Education Association teachers union, said she has been contacted by many educators who are concerned about violence in classrooms.

“School fights are not new,” she said. “However, the intensity of the fights we’re seeing is very alarming.”

Issues start at the elementary school level, where there’s a need to have mental health providers, Neisess said.

But social workers and counselors are now being asked to substitute in classrooms, she said, asking how the district can deal with situations if students aren’t being given the tools to be successful.

The violence occurring is completely unacceptable and there’s a need to come together to come up with a solution, Neisess said.

High school teacher Elizabeth Adler said many schools have invested large amounts of time training teachers and staff, and a lot of money has been spent employing outside agencies for discipline and behavior management.

Even with those supports in place, there’s a struggle with behavior on campus, she said, including students who have little to no respect for authority.

Denese Hurt said that her grandson, who’s in middle school, intervened after a group of eight students were jumping a peer after getting off a school bus. It happened, she said, after a student announced over the bus microphone system that a child was in love with a peer of the same sex.

Kathia Sotelo, an organizer with the Youth Power Project, said if the district wants to reduce violence in schools, it needs smaller class sizes. Large classes lead to a disruptive environment, she said.

Trustees also heard a presentation about student suspension and expulsion numbers. It aligned with the district’s Focus: 2024 strategic plan.

Board President Irene Cepeda said she wanted to clarify the metrics presented are data points the board is monitoring in order to keep track of progress toward goals and isn’t holistic of the entire issue.

During fall 2020 — when the district was operating under 100 percent distance learning due to the pandemic — only 271 students were suspended.

Assistant Superintendent John Anzalone said there were some bright spots with student suspension targets for the fall semester. The district’s rate was lower than its targets for almost all student groups, except among Black students.

There’s a lot of work to do regarding the suspension rate for Black students and the data is clear, he said.

Numbers presented to the board show a rate of nearly 105 per 1,000 Black students suspended in the fall. The district’s target was about 82 per 1,000.

The number of student discretionary expulsions have dropped drastically in recent years, according to data presented to trustees.

Some public commenters, though, said they felt the data was cherry picked and wasn’t reflective of what’s actually happening.