If you are having problems accessing today’s e-Edition, please click on this link VIEW E-EDITION
CCSD began planning funding move in April 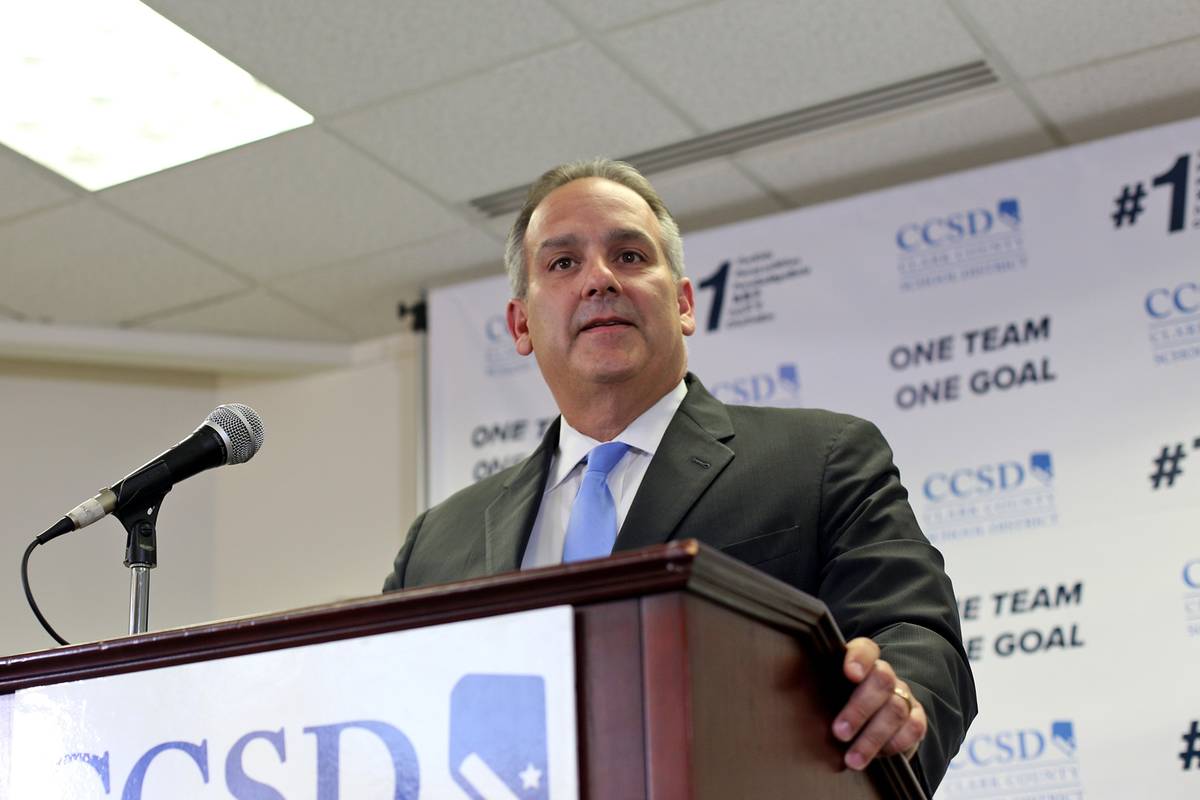 Emails obtained by the Review-Journal show the Clark County School District began planning in April to ask the state Legislature to allow it to use unspent school funds to shore up its budget — the clearest evidence to date that Superintendent Jesus Jara misrepresented the origins of the proposed Assembly Bill 2.

Jara has maintained in multiple public events, including a hearing of the state Assembly, that AB 2 did not come from CCSD. Separately, district representatives said in a statement that the idea of raiding the school funds was first raised by State Superintendent of Public Instruction Jhone Ebert.

That led Ebert and Gov. Steve Sisolak to accuse the superintendent of dishonesty for his disavowal. This week, the head of the Clark County teachers’ union waded into the fray, suggesting that an untold back story on the bill’s origins would be presented ahead of a special meeting of the Board of Trustees on Wednesday that could result in a vote on the termination of Jara’s contract.

The so-called carryover dollars are dedicated to schools under the law passed in 2015 that reorganized the school district, decentralizing operations and transferring more decision-making and budgetary power to principals and schools.

The unspent money for schools — estimated at more than $84 million — became an attractive alternative as the district faced sharp financial losses as COVID-19 took hold in Nevada, records show.

“I believe the first course of action is to eliminate the requirement to carry forward unspent money at the school level,” Chief Financial Officer Jason Goudie wrote in an April 6 email to Jara and two Communications and Government Relations employees, Brad Keating and Maria Marinch. “This is not reasonable in this time of disaster and we cannot reserve $70 million at the school level and try and make reductions at the district level.”

“We need to get a change in legislation to remove this requirement, at least through the end of the next biennium, and this needs to get done in the special session to allow us to better maintain a financial position.”

The district Communications Office on Friday declined a request to interview several individuals named in this piece, including Jara, Goudie and Keating, citing preparations for the school year.

The office did not offer further clarification on its past statement attributing the proposal to Ebert.

Timeline of the proposal

Goudie stated in the April 6 email that he and Keating had already spoken to Assemblywoman Maggie Carlton about the carryover proposal but that the district would “need to push this from a legislative level immediately with (the) governor’s office and others as that will provide sufficient funds to cover the risk of loss of funds in 2020 at least.”

Keating then asked the group if they could have a conference call about funding, to which Jara replied:

“Yes — Just want to make sure that we do not get ahead of ourselves and share publicly before I brief the (Board of Trustees),” he wrote.

In another email to Jara that afternoon, Goudie listed the potential financial impacts to the district under Sisolak’s proposal to cut between 4 percent and 14 percent from state agency budgets. He recommended that the district get legislation changes “to allow us to use the carryover from schools to fill some of this deficit before we make additional cuts and negatively impact our unrestricted ending fund balance.”

“… This is funding that should not be restricted for future use, when we are in the most significant financial disaster this state has ever seen,” he wrote.

In the following weeks, emails showed further steps being taken to compile information on the carryover funds to present to lawmakers.

On May 21, Keating wrote in an email to Goudie that Carlton and Assembly Speaker Jason Frierson had requested a list of carryover funds by school, adding that Jara had requested that Goudie compile the information. Goudie responded with a list and an example of the language change to the law the district was seeking.

Jara forwarded the list of carryover funds by school, along with an abridged note from Goudie, to the CCSD trustees on May 22, writing that the district planned to share it with Frierson and Carlton at Frierson’s request. But the email did not mention that the district was drafting language seeking to change the carryover law.

On June 16, Keating sent an email to Jara, Goudie and Chief of Staff Chris Bernier with the final language changes the district was requesting and seeking guidance on when to share the document with Ebert, Sisolak and state lawmakers.

The changes the district asked for read as follows:

“If the governor could provide a waiver of the carry-forward … this would create an opportunity for the district to have more flexibility to use these funds for the funding deficit, rather than reduce instructional programs or personnel. We believe that an option to utilize these reserves to mitigate budget reductions is a better option than being required to reduce operational costs that would significantly impact the instructional experience for our students.”

Later that night, Keating forwarded the proposal to Ebert with Jara cc’d. On June 23, Keating sent the same document to Frierson, with the district requesting that the item be included in the upcoming special session.

CCSD and lawmakers have both said that the district attempted to pull the bill from consideration approximately two hours before the governor proclaimed a special session of the state Legislature on July 7, but that it was too late to do so.

Much of the initial confusion around the bill’s origins stemmed from the fact that a CCSD representative didn’t present it in the Assembly. Instead, Clark County Education Association Executive Director John Vellardita presented an amendment to revert the carryover money to schools hurt most by the $100 million in education cuts proposed and later approved by the Legislature, including loss of funds for categorical funding for low-income and English-language learners. Vellardita stated that the union did not originate the bill, which ultimately died without a vote.

At that point, the school district said in a statement that it hadn’t considered the carryover proposal until Ebert brought it up.

Ebert told the Review-Journal on Friday that the carryover came up during a phone call with Jara in late June. She said it was not in her or the department’s purview to bring such a bill to the Assembly.

In a joint statement with Sisolak after Jara’s disavowal of the bill, Ebert lambasted the superintendent, saying that by “blatantly altering” the truth of the proposal’s origins, he had set a bad example and done a disservice to district families and educators.

“While I’m not surprised, I’m incredibly disappointed that once again Superintendent Jara has tried to mislead the communities he represents and blame others in order to avoid the repercussion of his poor decisions,” Sisolak said.

While the condemnation at the state level was swift, Jara has received support from local leaders, including the mayors of Las Vegas, Henderson and North Las Vegas, as well as the chairwoman of the Clark County Commission.

In a joint letter, the officials did not address the accusations of dishonesty against Jara, but instead praised his ability to bring the municipalities into the fold at CCSD.

“Dr. Jesus Jara’s record for improving student achievement is unquestionable. His resolve to address the myriad inequities present in our district is unchanging,” the letter stated. “Dr. Jara has opened his office to local elected officials and routinely welcomes our input on the decisions that will affect this region.”

Jara has also received support from CCEA, which represents 18,000 district teachers. In a statement, the union said the “effort to remove Superintendent Jara … is reckless and irresponsible.”

“There is a backstory to this episode that CCEA will be sharing with the public as the July 29th School Board meeting approaches. All the facts have not been shared about the controversy and we welcome that discussion and will bring to light what has been conveniently left out by those who want to remove Superintendent Jara,” the statement said.

Vellardita, the union’s executive director, declined to elaborate before the meeting.

Three sources with knowledge of the matter told the Review-Journal that the “backstory” referenced in the CCEA statement involves the governor’s office.

According to this version of events, Sisolak’s office approached the district with a proposal that it use the money to pay unemployment claims for school support staff, who work nine- and 10-month contracts and are not eligible to file for unemployment.

But Lisa Guzman, executive director of the Education Support Employees Association, which represents the district’s support staff, said she had not heard of such a proposal in her conversations with Sisolak or throughout the special session and would not have supported it.

Guzman added that since April the union has been seeking to secure assistance for support staff via the Pandemic Unemployment Assistance program, albeit so far unsuccessfully.

Meghin Delaney, a spokeswoman for Sisolak, reiterated Friday that CCSD originated the AB2 proposal and noted that the provision addressing the carryover funds would not have allowed the district to use them for anything unrelated to instructional services and programs.

She also echoed Frierson’s comment that it was too late to change the proclamation after the district said it wanted to withdraw the bill.

“The governor’s office has no record of a direct request being made … to remove the bill from the proclamation. At the end of the day, due to limited time and scheduled release of the proclamation, the ability to discuss this proposal was kept on the proclamation, with the understanding that if a decision was ultimately made to not go forward with the measure, that would be the outcome, which is what ended up happening,” she said in a statement.