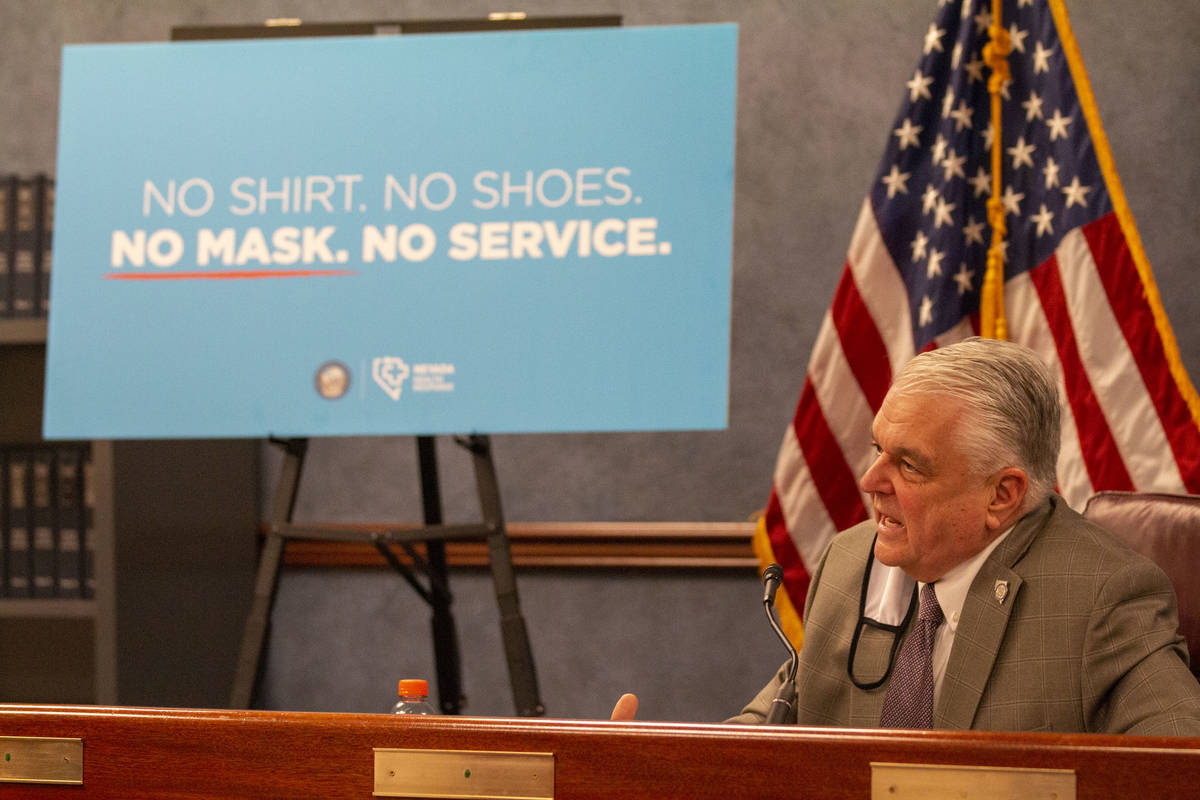 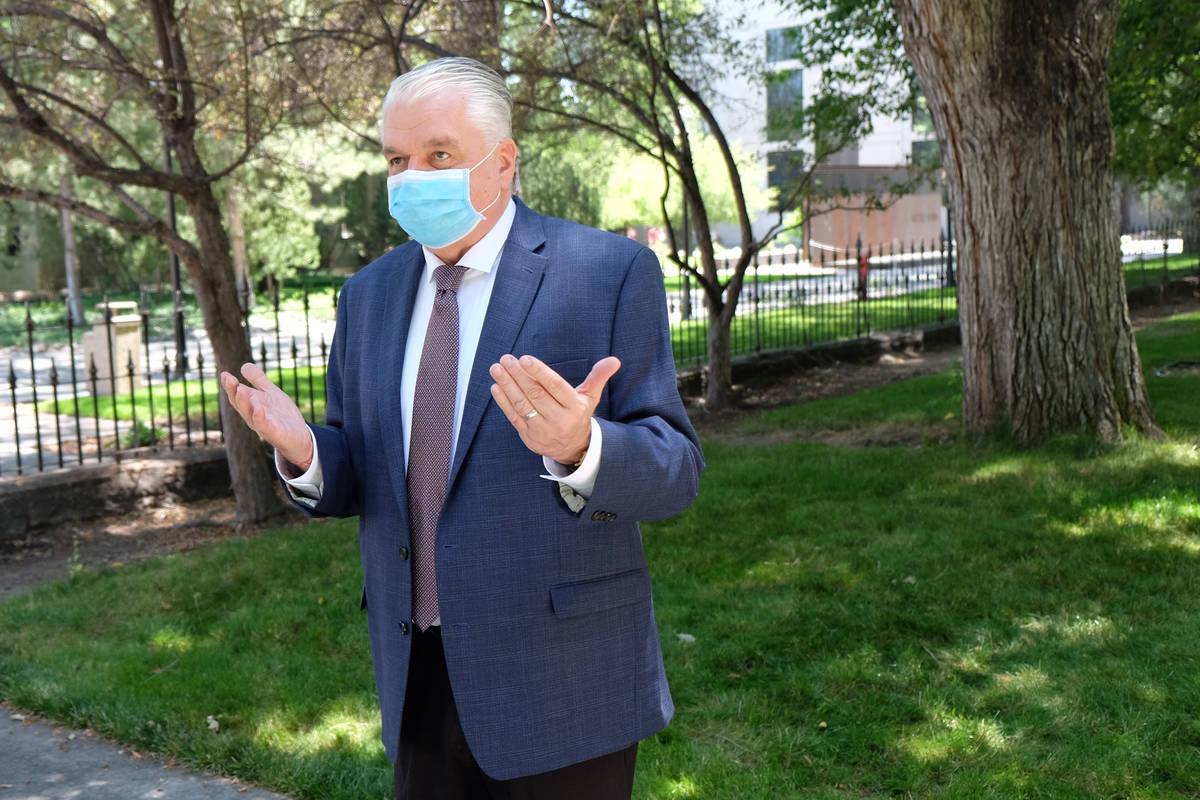 A masked Gov. Steve Sisolak speaks to reporters outside the Capitol discussing spending cuts and other measures being considered by the Legislature in special session. July 8, 2020. (Bill Dentzer/Las Vegas Review-Journal) 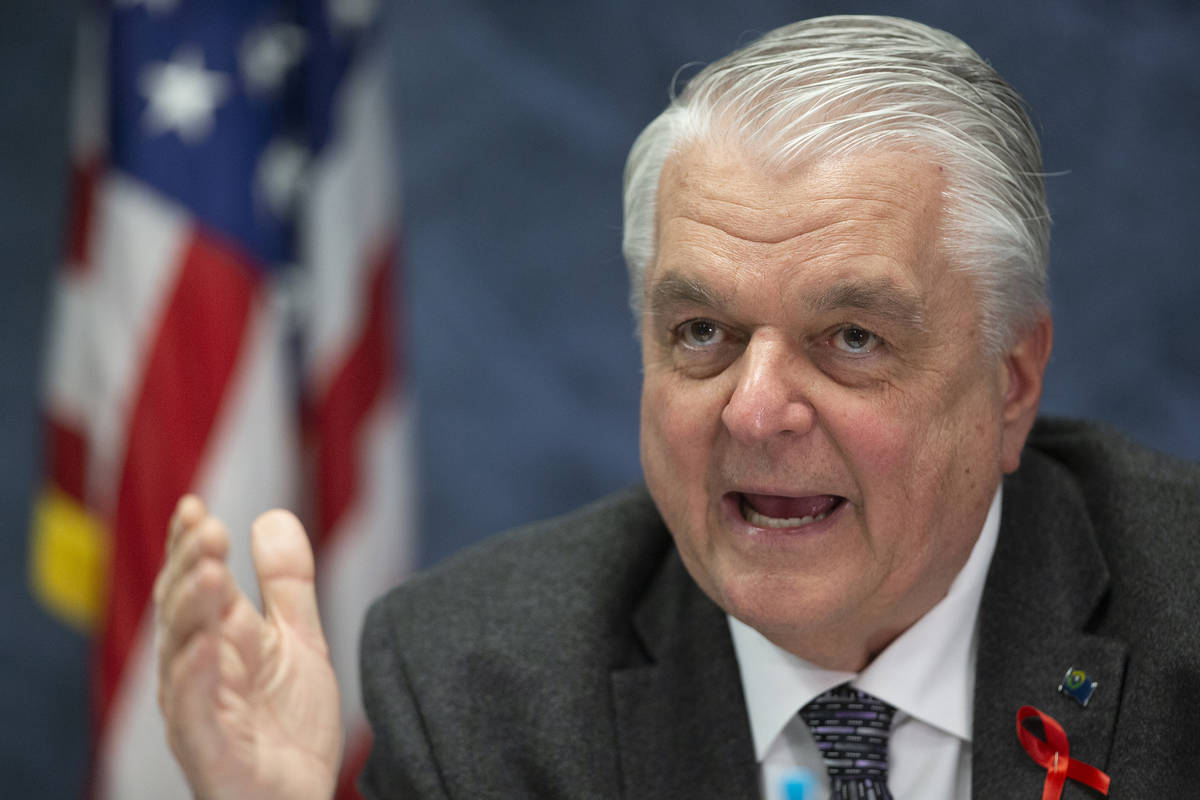 Clark County School District Superintendent Jesus Jara on Tuesday sidestepped an accusation by the governor and top state education official that he displayed a lack of honesty in comments on a controversial bill, but said he regretted the incident had “deterred the conversation away from education.”

The superintendent’s statement came after Nevada Gov. Steve Sisolak and Superintendent of Public Instruction Jhone Ebert released a joint statement early in the day excoriating Jara for denying that a proposal to repurpose unspent money from schools for the district’s budget originated with CCSD.

The governor and top state education official used strong language in criticizing Jara, saying he that he had misrepresented the district’s role in the legislation in multiple public forums last week.

Sisolak said he could not “sit back and remain silent as Superintendent Jara tries to wrongfully place blame rather than taking responsibility for his actions.”

“While I’m not surprised, I’m incredibly disappointed that once again Superintendent Jara has tried to mislead the communities he represents and blame others in order to avoid the repercussion of his poor decisions,” Sisolak said. “Being superintendent of one of the largest school districts in the nation requires leadership — especially in the midst of a crisis. And leadership requires honesty. Unfortunately, that is not what we get from Superintendent Jara. Clark County students, staff and families deserve better.”

Blame for the proposal

The latest skirmish between Sisolak and Jara comes at a critical time when the schools and state are facing funding shortages and in the midst of a special session of the Legislature to try to address the massive deficit caused by the COVID-19 outbreak in the state. Just shy of one year ago, Sisolak called Jara out publicly over a threatened teachers’ strike, accusing the district of failing to account for professional development funding in its budget request.

Sisolak’s statement came after the CCSD said Monday in response to an inquiry from the Review-Journal that the idea to sweep so-called carry-over money originated with Ebert. An email sent by district representatives on June 16 shows CCSD approaching Ebert about a change to the school carryover law.

Ebert said in her statement Tuesday that it was “incredibly concerning” that Jara placed the blame for the proposal on the state.

“Once it became clear the proposal did not have support, Superintendent Jara disrespected our elected officials and the entire CCSD community by misrepresenting his intentions,” Ebert said. “As a leader in education, he has a responsibility to set an example for our children. Blatantly altering the truth is not only a bad example, but it’s a disservice to the educators, students and families he represents.”

In his response on Tuesday, Jara did not address the comments about the bill but said that state and district officials must work together to address the funding crisis facing the public schools.

“I am sure we can collectively agree, it’s time to redirect our focus to the 320,000 students we serve in the Clark County School District,” Jara’s statement said. “But I want to be clear that I want to work hand in hand with our state leaders to find the right solutions for maintaining fiscal responsibility while at the same time giving our children and their families what they need to be successful.”

Meanwhile, a petition has surfaced asking the CCSD Board of Trustees to “review the integrity, honesty, and leadership performance of the one employee it supervises, Superintendent Jesus Jara.”

Five out of seven CCSD board members including Lola Brooks, Chris Garvey, Linda Young and Deanna Wright did not return requests for comment, while Danielle Ford declined to comment.

Trustee Linda Cavazos said she could not speak for the board, but added that the differing accounts of the origins of Assembly Bill, the measure to rake back the unspent school funds, were of concern to her.

“Both entities need to be working together, and when there’s a loss of trust or confidence, it could get in the way of achieving our goals,” she said.

Of seven newcomers running for school board seats who may be in office at the time of Jara’s contract renewal, five offered statements on Tuesday.

District E candidate Alexis Salt said Jara was wrong to lie, and may have damaged relationships with lawmakers.

“Much of our funding struggle comes from a lack of trust. Lawmakers and voters don’t trust CCSD to do what it says it’s going to do. Sadly, dishonesty on the part of our superintendent furthers that distrust,” Salt said.

District A candidate Lisa Guzman, who is also executive director of the Education Support Employees Association, said Jara’s behavior was less than honest, resulting in an “unproductive blame game which accomplished nothing for our schools or our community.”

“I eagerly await Dr. Jara’s plan to win back that confidence,” Guzman said.

District B candidate Katie Williams characterized the lack of transparency and recriminations surrounding AB 2 as “appalling,” adding that it demonstrated a lack of leadership within both CCSD and the state executive branch.

Morales’ opponent, Tameka Henry, said in an email that as a parent member of the school organizational team, she felt the bill was irresponsible after principals were told that the funds that rolled over would remain at their schools.

“No matter where AB2 came from, all adults should be laser focused on the education and wellbeing of our students during this time of uncertainty,” Henry said.