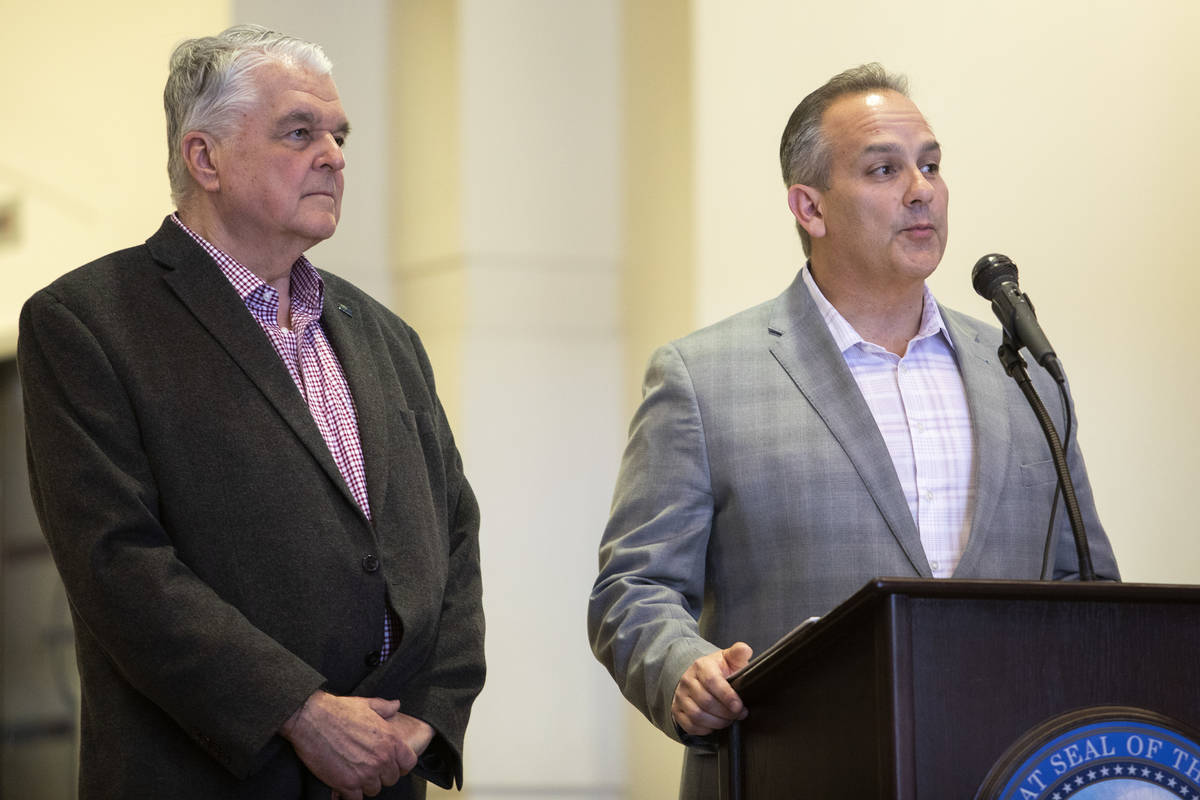 Clark County School District Superintendent Jesus Jara answers questions after Gov. Steve Sisolak announced that CCSD schools will close beginning Monday due to coronavirus at the Sawyer Building on Sunday, March 15, 2020, in Las Vegas. Jara continues to try to distance himself and the district from a controversial proposal that would have allowed the district to use local schools’ unspent funds for the district’s own budget. (Ellen Schmidt/Las Vegas Review-Journal) @ellenkschmidt_

CARSON CITY — Superintendent Jesus Jara continues to try to distance himself and the Clark County School District from a controversial proposal that would have allowed the district to use local schools’ unspent funds for its own budget.

But it was the district that asked for that proposal to be included in Nevada’s special legislative session, according to emails sent by the district last month to state and legislative leaders.

The district’s director of government affairs, Brad Keating, sent an email on June 23 to Assembly Speaker Jason Frierson, Jara and the district’s Chief of Staff Christopher Bernier asking for the proposal for the carryover of funds to be included in the special session, according to Frierson, who read the email to a reporter. A similar email was sent by Keating to state Superintendent Jhone Ebert a week before, on June 16. A copy of it was reviewed by the Review-Journal.

The proposal was included in Gov. Steve Sisolak’s proclamation that set the agenda for the state’s special legislative session, which convened on July 8 to address the state’s projected $1.2 billion budget hole.

Frierson said Jara called him hours before Sisolak’s proclamation was released July 7 and asked for it to be pulled. Frierson said he forwarded that request to the governor’s office.

The proposal still made it into Sisolak’s proclamation, which eventually became Assembly Bill 2.

Asked about the bill during a virtual town hall Monday, Jara denied that the proposal to sweep unspent carryover funds at the school level had originated with the district, as had been previously stated during a Legislature meeting over the weekend.

“It was not the recommendation and it was not CCSD’s bill,” Jara said, adding that he would work with school principals to balance the budget. Jara’s statement came in response to a question at a virtual town hall.

District representatives said earlier Monday afternoon that a statement from the superintendent on the subject was not immediately available.

The origin of the proposal was unclear last week. Asked about the proposal on the first day of the special session, Jara told lawmakers that “the funding would remain at the school level.”

When the bill got a hearing in the Assembly on Saturday, it wasn’t Jara or the district presenting the bill, but rather John Vellardita, the executive director of the Clark County Education Association, who had proposed an amendment to limit which schools from the district could access the carryover funds.

“This entire concept was initiated by CCSD’s request to make the reversions mandatory,” Frierson said Monday.

District was behind bill

Frierson said he struggled to get a straight answer from the district in the days leading up to that hearing about whether it would support or oppose the bill.

When it came time for that hearing, Jara testified as neutral and said he had told Frierson the day before the session started that he didn’t want the bill to move forward.

Frierson, seemingly irked by Jara’s comments, told the Assembly afterward that he wanted to make it “abundantly clear” that CCSD had brought the bill forward.

The district’s initial proposal sent to Ebert and Frierson went slightly further than the eventual bill, as it would have required schools to revert their carryover funds to the district. Ultimately, the language in AB2 would have given the district permission to access those funds.

Frierson said that the change to making the language permissive made it a worthwhile discussion to be had by lawmakers.

Frierson said he would understand if the district had backed off from the proposal after hearing from principals who opposed the idea.

“But to disavow any involvement whatsoever, when it was initiated by CCSD, I just think the the principals, teachers and parents deserve a more straightforward acknowledgement,” Frierson said.

On Monday, the Assembly put the bill on the chief clerk’s desk, often a sign that a measure is not going to advance.