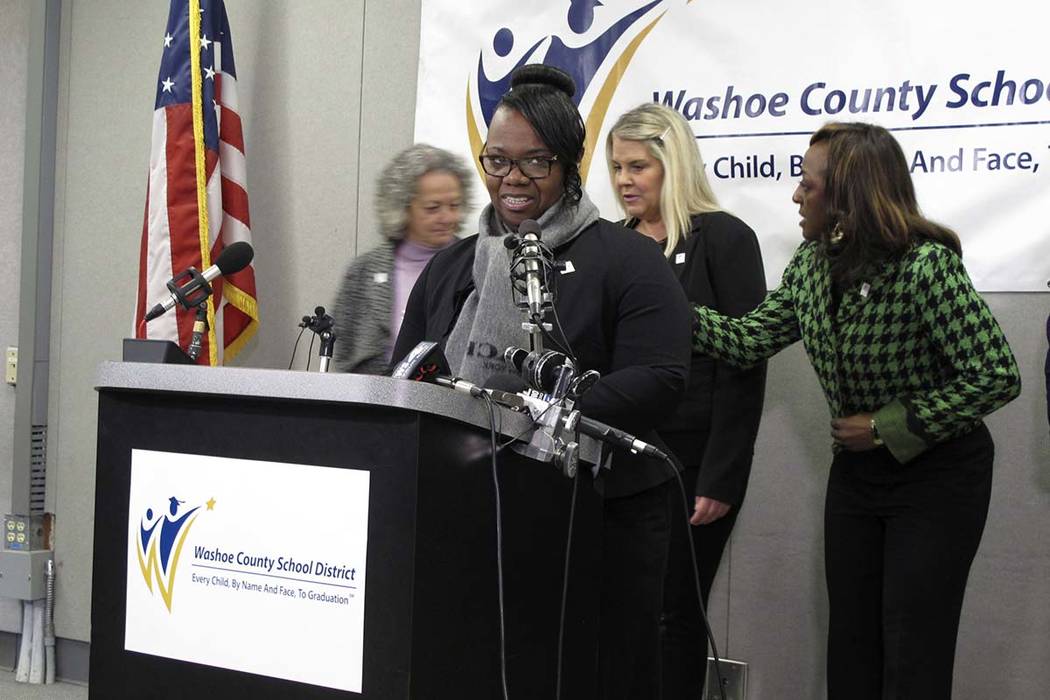 Traci Davis, superintendent of the Washoe County School District, speaks to reporters, Dec. 8, 2016, at the school district's headquarters in Reno. Davis, whose contract was terminated this summer over the alleged leak of confidential information, is the recommended choice for the vacant principal position at West Prep in Las Vegas. (Scott Sonner/AP)

The former Washoe County School District superintendent whose contract was terminated this summer over the alleged leak of confidential information is the recommended choice for the vacant principal position at West Prep in Las Vegas.

The acrimonious battle between Traci Davis and the Washoe school board centered on the termination of Jenny Ricci Hunt, who sued the district in 2018 claiming wrongful termination, the Reno Gazette-Journal has previously reported.

The Review-Journal has also confirmed that Byron Green, the former chief of student services who was also fired in connection with the Washoe County controversy, has been hired by the Clark County School District and is working as a music teacher at Vegas Verdes Elementary.

Green and Chief of Staff David Lasic were fired from the Washoe district in July for giving information to Hunt as her lawsuit was ongoing, the Reno newspaper has reported. The district accused Davis of negligence after receiving documents that it claimed proved Green fed information to Hunt.

But Davis told the Washoe board at the tense termination meeting that she was not sure how someone got the confidential information and that she did not participate in leaking it.

Green, Lasic and Davis all previously worked in the Clark County School District.

In a statement, the Clark County School District said it is committed to ensuring students receive a “rich and rigorous education” and understands the need for a committed and effective principal at every school.

“I am extremely excited to recommend a proven leader to turnaround West Prep Academy,” Superintendent Jesus Jara said in the statement.

The district said it conducts a thorough recruitment process, including working with the school organizational team to ensure that parents and educators are involved in the principal selection process.

The hiring must be approved by the Clark County School Board.

In a text message, Davis said she is still going through the hiring process and it would not be appropriate for her to comment.

When contacted by phone this summer, Green hung up on a reporter.

The emotional split in Washoe County included accusations of racial discrimination and ended with a lawsuit brought by Davis against the board.

Davis, an African-American leader in a district where less than 3 percent of the student population is African-American, accused the board of depriving her of her rights and “maliciously” going after her in the lawsuit, the Reno newspaper has reported.

If approved by the Clark County School Board, Davis will return to the district she worked for roughly 15 years. She began in the district as a third-grade teacher at Cram Elementary in 1997.

The principal position at West Prep, a K-12 school, is one of three that are open following the removal of those leaders due to low star ratings. While West Prep’s elementary school is two stars and high school is four stars, its middle school has remained at one star.

Green, meanwhile, has returned to teaching in the district since July, district documents show. In Washoe, Green was put on administrative leave in 2017 after an investigation into the special education department that he led at the time, according to the Reno Gazette Journal.

Both Green and Hunt faced allegations of bullying as an outside firm investigated harassment and a hostile work environment within the department. Although Hunt was fired, Green reached a settlement agreement with the district in 2018, the newspaper previously reported.