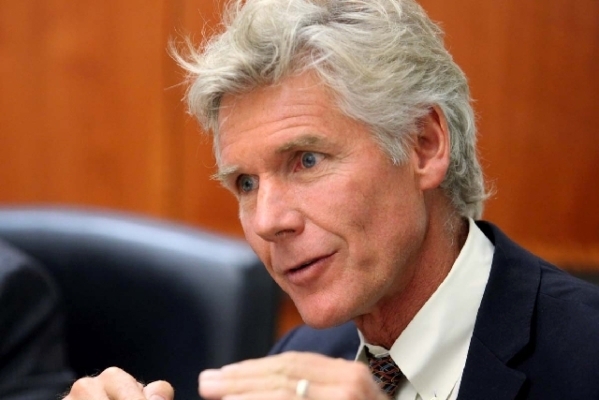 Board of Regents Vice Chairman Rick Trachok speaks to the Review-Journal Editorial Board on August 15, 2013. (Las Vegas Review-Journal)

As state lawmakers consider dismantling the Nevada System of Higher Education, the agency’s Board of Regents will gather Friday in what some political insiders criticized as a bureaucratic stunt aimed at thwarting reform efforts.

Sources say Assemblyman Stephen Silberkraus and other Republican legislators are drafting a bill that aims to split up NSHE, an agency whose schools have long been plagued by weak performance and dismal graduation rates, which rank among the lowest in the nation. Although the effort has drawn praise from some education insiders and Las Vegas business leaders, NSHE officials maintain that they can improve the state’s eight colleges and universities without legislative intervention.

“While I appreciate the Board of Regents’ sudden interest in reforming their system, this is only a first step,” Silberkraus said of Friday’s meeting, where regents will spend at least five hours contemplating their role as policy and budget setters for Nevada’s public higher education system. “It is going to take a lot more than a single agenda to prevent the legislature from moving forward with much-needed and long overdue NSHE reform.”

The proposal’s backers say NSHE badly needs a breakup to better serve the state’s 100,000 college students, especially as Gov. Brian Sandoval seeks to push his signature issue: diversifying Nevada’s tourism-dependent workforce. But board Chairman Rick Trachok, who emphasized Thursday that he had no knowledge of the emerging legislation and dismissed accusations that Friday’s meeting is politically motivated, said there is no need to restructure NSHE.

“In a state like Nevada, where we have scarce resources, to create an entire new administrative system to oversee part of what the Board of Regents covers right now is not a wise use of funds,” Trachok said. “More importantly … what we do as a single system is we can work together between the colleges and universities and make sure that we have seamless articulation between the students attending a college and then either transferring to a state college or a university.”

Funding and student success will dominate at Friday’s all-day meeting, where regents will discuss an array of initiatives that seek to consolidate — not divide — the system’s duties. For instance, regents will consider proposals to create an automatic transcript exchange and a single registration platform for all system institutions. Along with discussing the “alignment of NSHE institutions,” regents will discuss a new self-assessment with metrics that include how the board is working to increase the number of students getting college degrees in Nevada.

Only 15 percent of Nevada’s college students graduated on time from a public four-year university in 2013 — that’s less than half the national average, according to data from the National Center for Education Statistics. It has the fourth-lowest ranking in the country, followed by New Mexico, Alaska and the District of Columbia. Completion rates at the state’s two-year colleges are also poor — only 2.8 percent of students graduated on time in 2013, with only Indiana and Vermont posting worse rates.

“The current arrangement is 50 years old now, and in 50 years there should have been more progress,” said Carol Lucey, who served as president of Western Nevada College for 14 years before resigning in 2013. “Suddenly there’s a lot of activity now, and that’s good — that’s fine. But one gets the sense it’s under pressure.”

The process faced scrutiny after the Las Vegas Review-Journal revealed last summer that NSHE Chancellor Dan Klaich had tried to quash a report critical of NSHE that was meant to go before the legislative committee.

Asked about Friday’s meeting and Silberkraus’ proposal to break up the higher education system, Klaich said regents are gathering to advance the efforts of the 2013 Legislature.

“My advice to legislators who ask me how to go about studying this is that you want an objective, outside source giving you different options — someone who doesn’t have a stake and was not hired by Dan Klaich,” said Mario Martinez, a former UNLV professor and vice chancellor of strategy at the National University System in San Diego. “If you live in a state with less than 1 million people, maybe a single system works. But as your state grows, then you …need to allow enough attention for all institutions.”