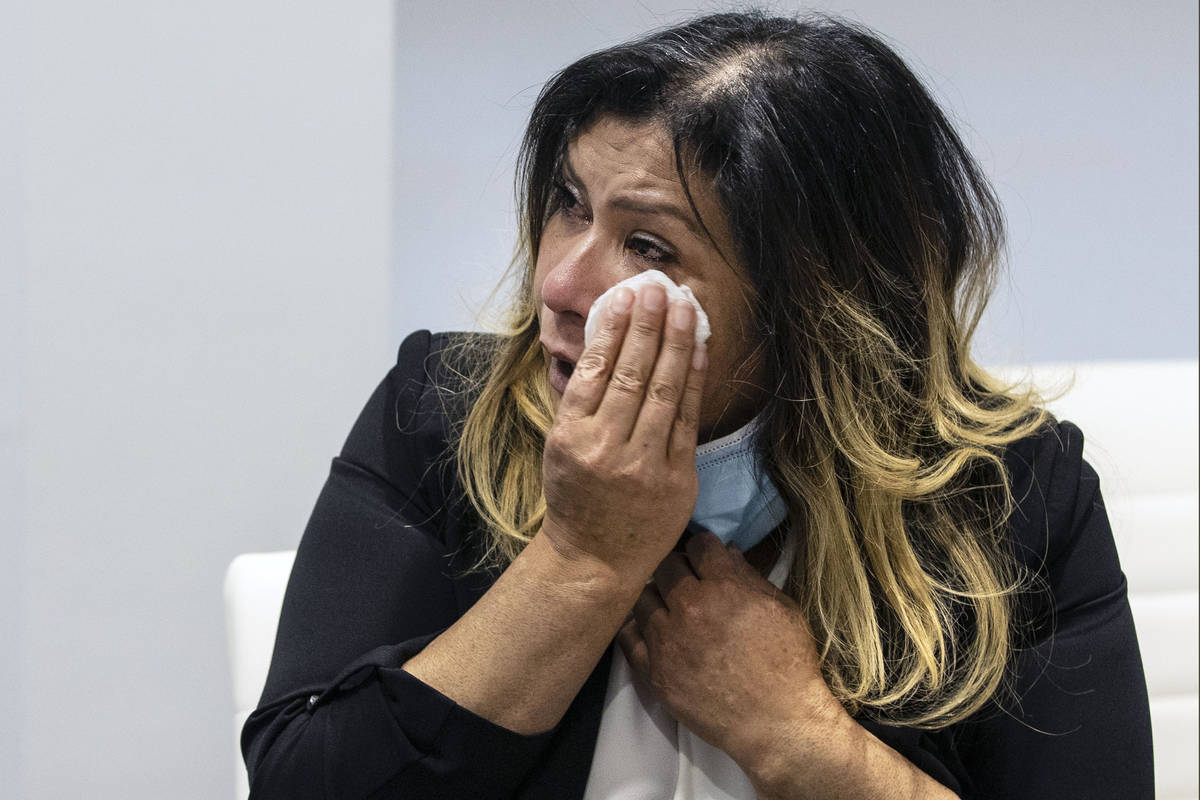 Maria Garcia weeps as she talks about her daughter at her attorney's office on Friday, Feb. 12, 2021, in Las Vegas. Garcia is one of three parents of special needs children who filed a lawsuit against Thiriot Elementary School administrators and the Clark County School District. (Bizuayehu Tesfaye/Las Vegas Review-Journal) @bizutesfaye 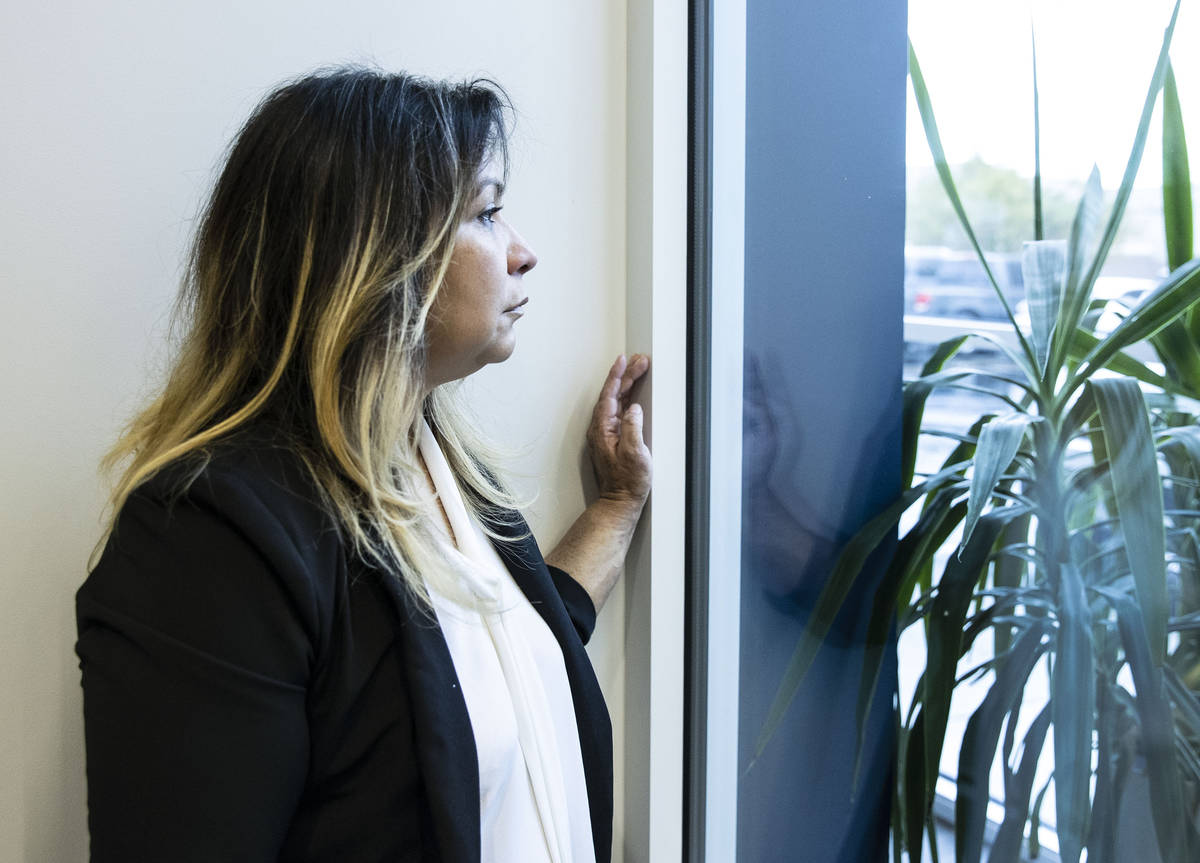 Maria Garcia poses for a photo at her attorney's office on Friday, Feb. 12, 2021, in Las Vegas. Garcia is one of three parents of special needs children who filed a lawsuit against Thiriot Elementary School administrators and the Clark County School District. They allege that their children were physically, emotionally and verbally abused by a special education teacher and a classroom aide in the 2019-2020 school year. (Bizuayehu Tesfaye/Las Vegas Review-Journal) @bizutesfaye 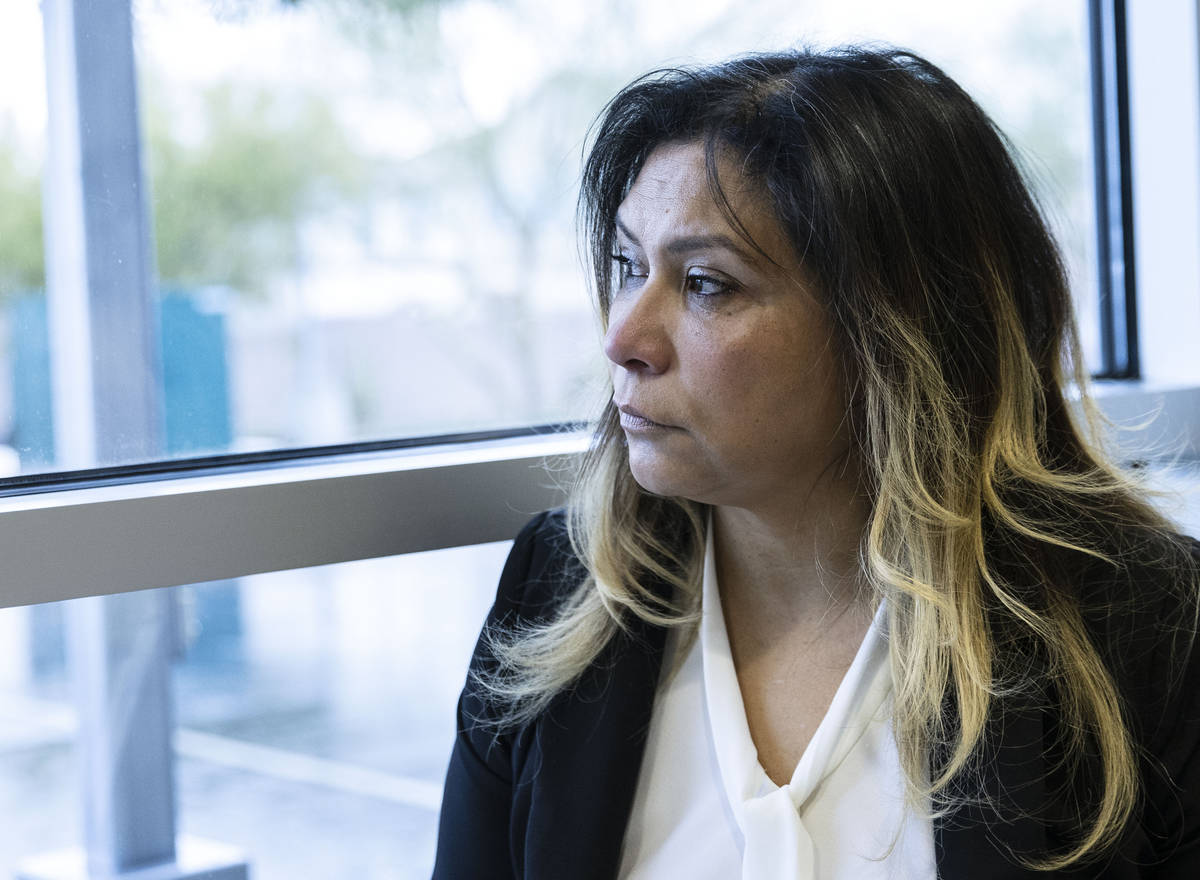 Maria Garcia poses for a photo at her attorney's office on Friday, Feb. 12, 2021, in Las Vegas. Garcia is one of three parents of special needs children who filed a lawsuit against Thiriot Elementary School administrators and the Clark County School District. They allege that their children were physically, emotionally and verbally abused by a special education teacher and a classroom aide in the 2019-2020 school year. (Bizuayehu Tesfaye/Las Vegas Review-Journal) @bizutesfaye

The mothers of three special-needs students at Thiriot Elementary School have filed a lawsuit that accuses a teacher of using a long, wooden yardstick to poke and strike their children.

Students referred to the yardstick as a “palo palo” – a Filipino term for spanking.

In a federal civil rights complaint filed Wednesday, the parents accuse teacher Shane Butuyan of using the yardstick to physically, emotionally and verbally abuse his students in 2019.

The lawsuit claims the defendants violated the children’s rights under the Americans with Disabilities Act and the Rehabilitation Act of 1973.

The school district has declined to comment, citing pending litigation.

‘No steps to intervene’

Garcia’s daughter was one of three children — identified in court documents as 8-year-olds K.H. and K.G. and 9-year-old A.K. — who attended Thiriot during the 2019-2020 school year.

Unique Barnett, one of the parents in the case, began reporting misconduct to school officials in early August 2019 after witnessing Escamilla yelling in students’ faces, according to the lawsuit. Administrators promised to investigate.

A week later, according to the lawsuit, Barnett reported the aide again after a family member and a bus driver saw her grab Barnett’s 8-year-old son by the arm and drag him across the campus while he cried and ran to prevent himself from falling.

But, the complaint states, “Holdsworth and Mechem failed to document or investigate the incidents, took no steps to intervene to stop the ongoing emotional abuse of disabled students, failed to discipline or retrain Escamilla to prevent future occurrences, and concealed the mistreatment from the victims’ parents.”

Students reported that Butuyan hit them with the yardstick called “palo palo” on their hands and bodies, as well as their desks and chairs, to get them to pay attention, according to the complaint.

The parents say that it was only after Child Protective Services started an investigation in September 2019 that Butuyan was removed from the school.

But the parents say nobody — not the school district, school police or school administrators — notified them that their kids had been subjected to abuse or been identified as victims in the ongoing investigation.

In a 911 call, the principal, Holdsworth, told the operator that a teacher had been using a yardstick to intimidate the children.

While on hold, she can be heard saying to a colleague: “We can’t tell anybody about this. We have to keep it quiet. We can’t even tell special ed, like, we’re not even going to tell them.”

A recording of the call was provided to the Las Vegas Review-Journal by the law firm representing the parents.

Neither Butuyan nor Escamilla could be reached for comment.

“When a public school district cannot even meet the lowest bar – to keep your kid physically safe while he’s at school – then the district has totally failed,” said Kara Karr, the mother of one of the students. “What happened to our son should never have happened, and Clark County School District cannot allow it to ever happen again.”

According to the lawsuit, the district and school administrators failed to comply with state law and district policies in documenting the abuse and reporting it in a timely manner.

‘Failed on all levels’

The district also claimed in its required report to the state that there was no abuse at Thiriot Elementary School in 2019-2020 and that no student’s rights had been violated, according to public records obtained by the families’ attorneys.

“This case is about accountability and for justice for these families and to prevent this from ever happening again,” said Rahul Ravipudi, one of the attorneys from Panish Shea & Boyle LLP, who are representing the parents.

This isn’t the only recent federal case against the school district involving special-needs children. Last year, parents sued the district, claiming it had violated the constitutional rights of their special-needs kids after their daughter was sexually assaulted by her former school bus driver.

Due to their disabilities, the three students in this case are unable to verbally report all that they experienced at school, according to the lawsuit, and the full extent and duration of the abuse is unknown.

But it alleges that the effects of the abuse are evident: frequent nightmares and difficulty sleeping, and becoming increasingly quiet, emotional, sad and withdrawn. Sometimes, the kids are aggressive with their siblings, and they have a hard time trusting people. They refuse to go to school, the parents say, or they respond to simple reprimands by crying hysterically.

“We’d expect educators to teach about accountability, honesty, and responsibility,” Ravipudi said. “And what we’ve seen in this case already is the Clark County School District failed on all levels.”