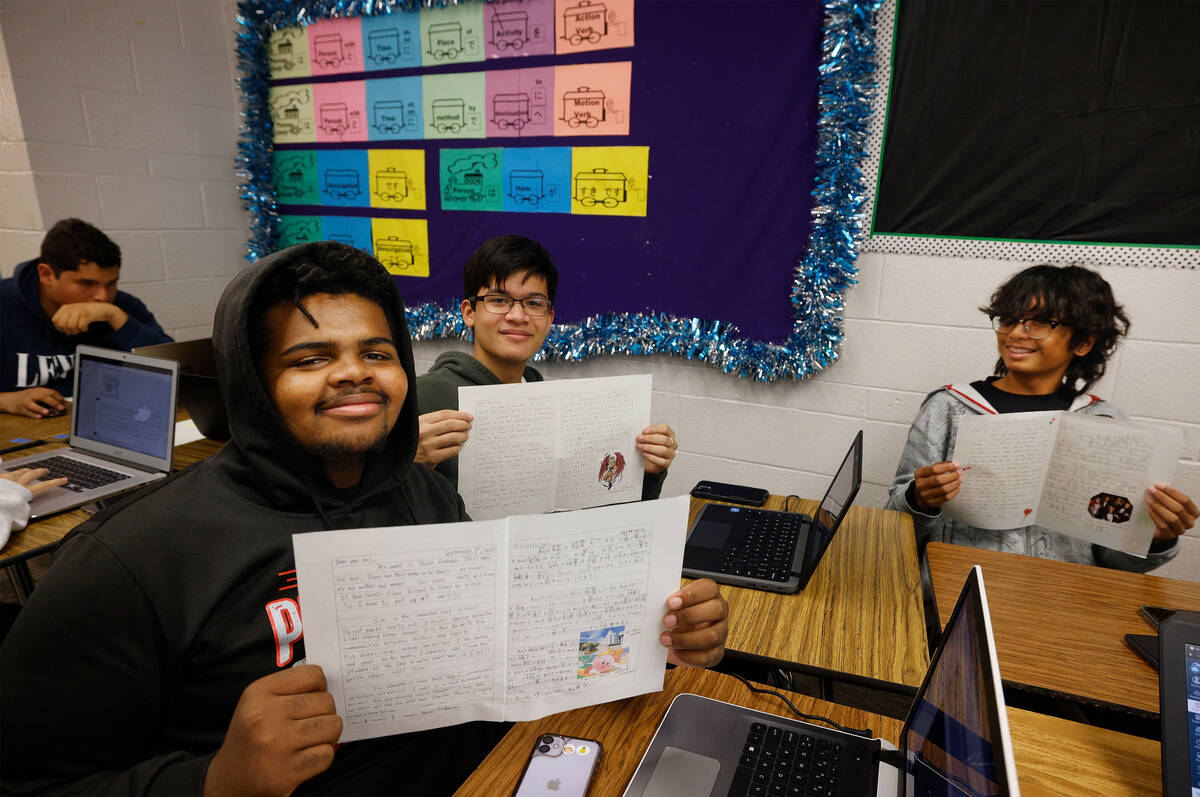 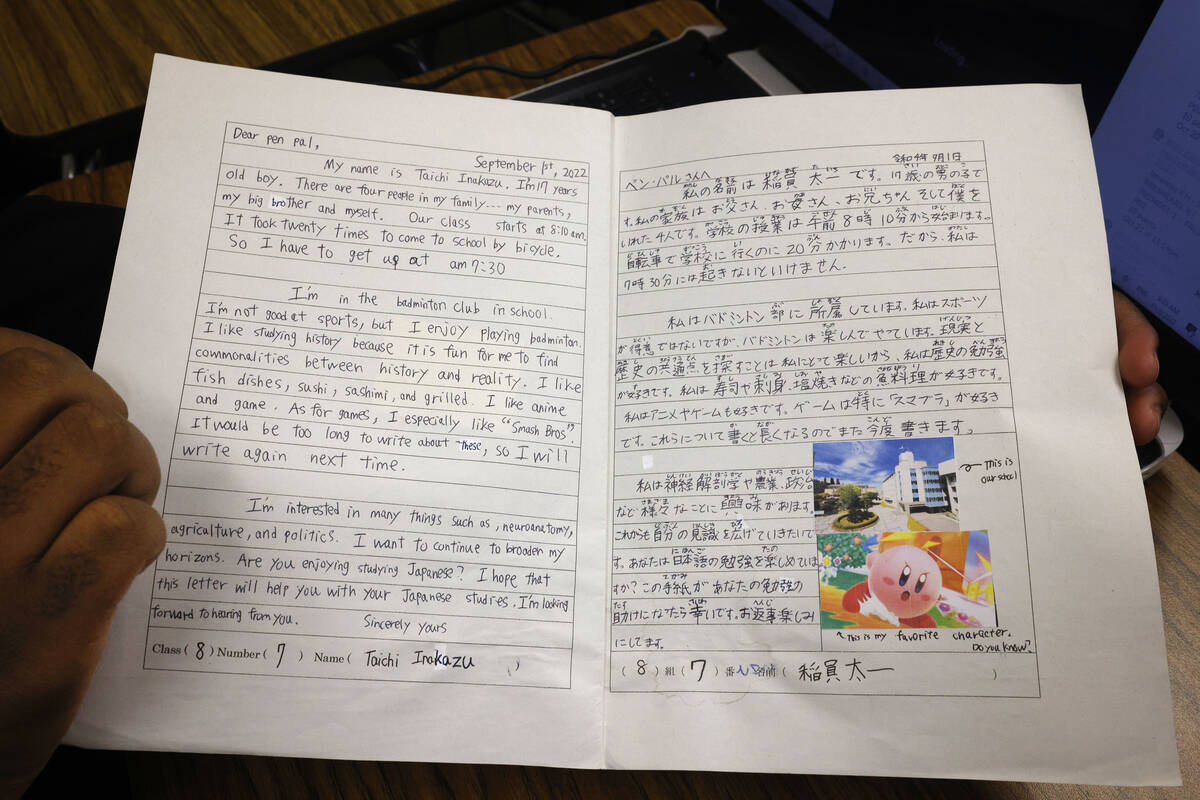 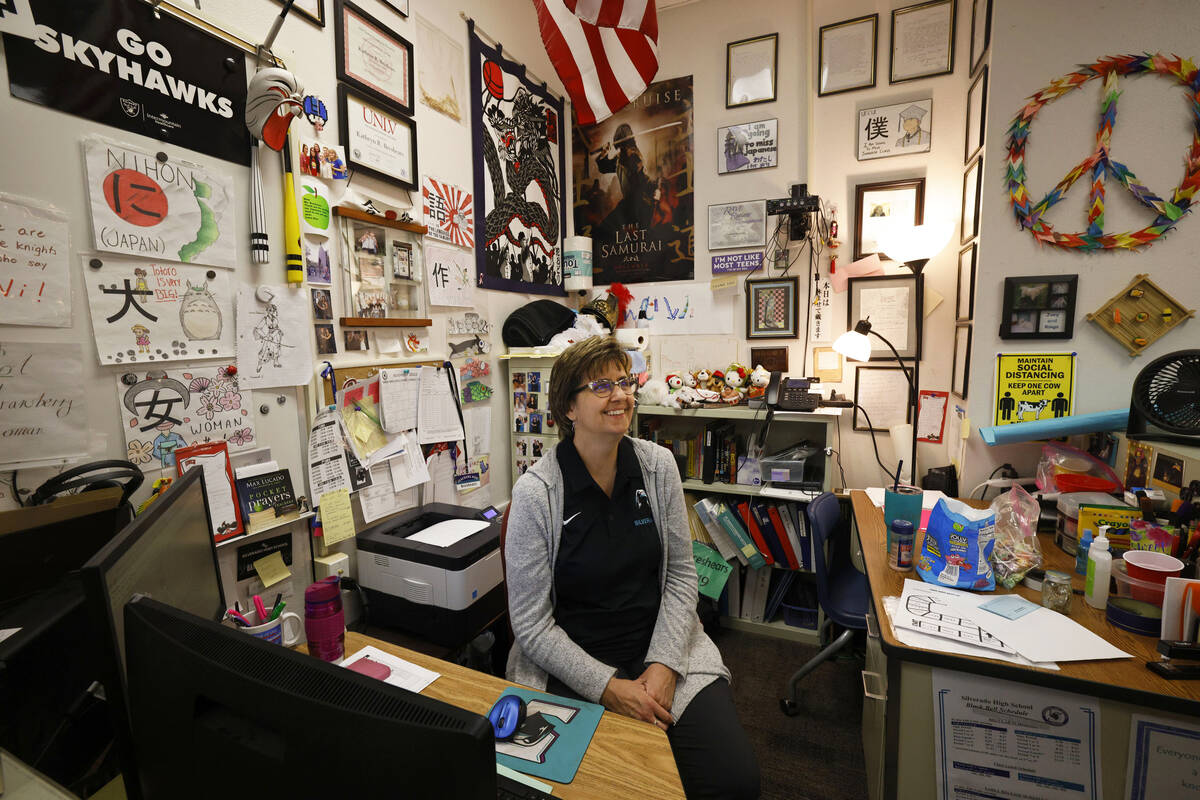 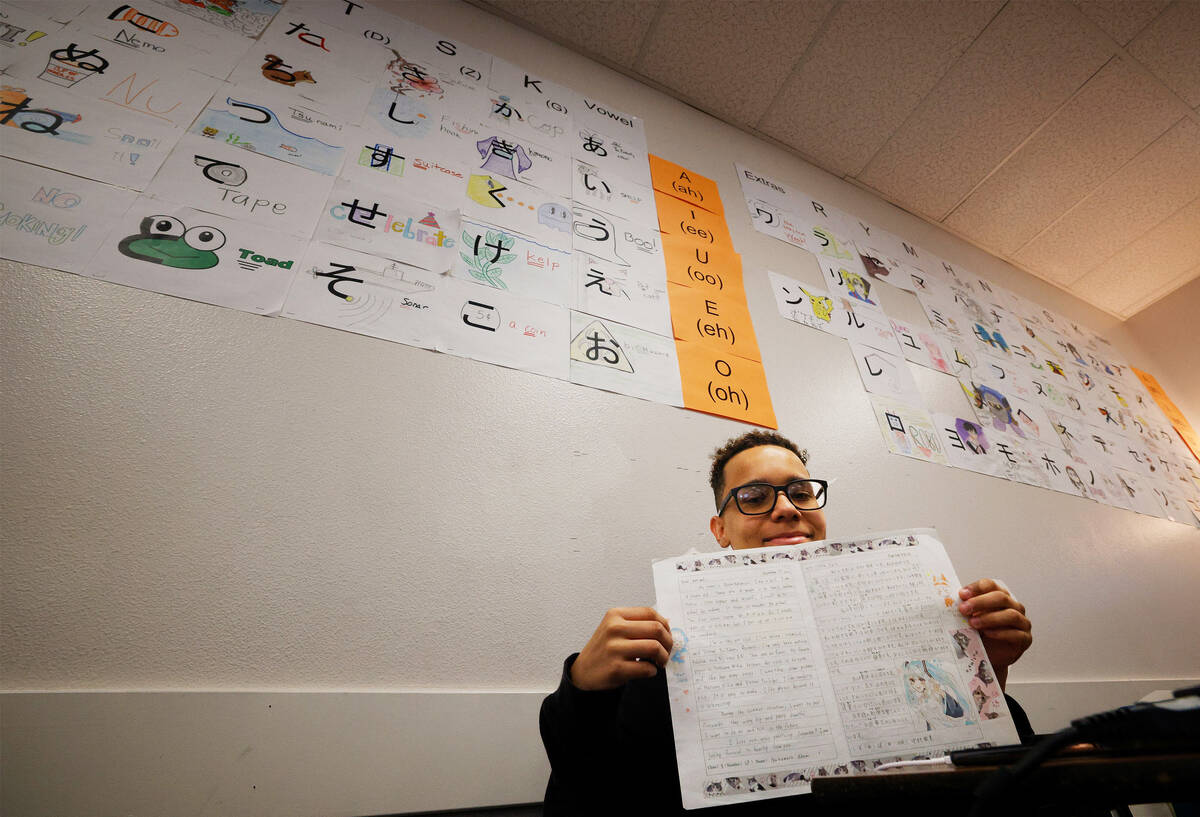 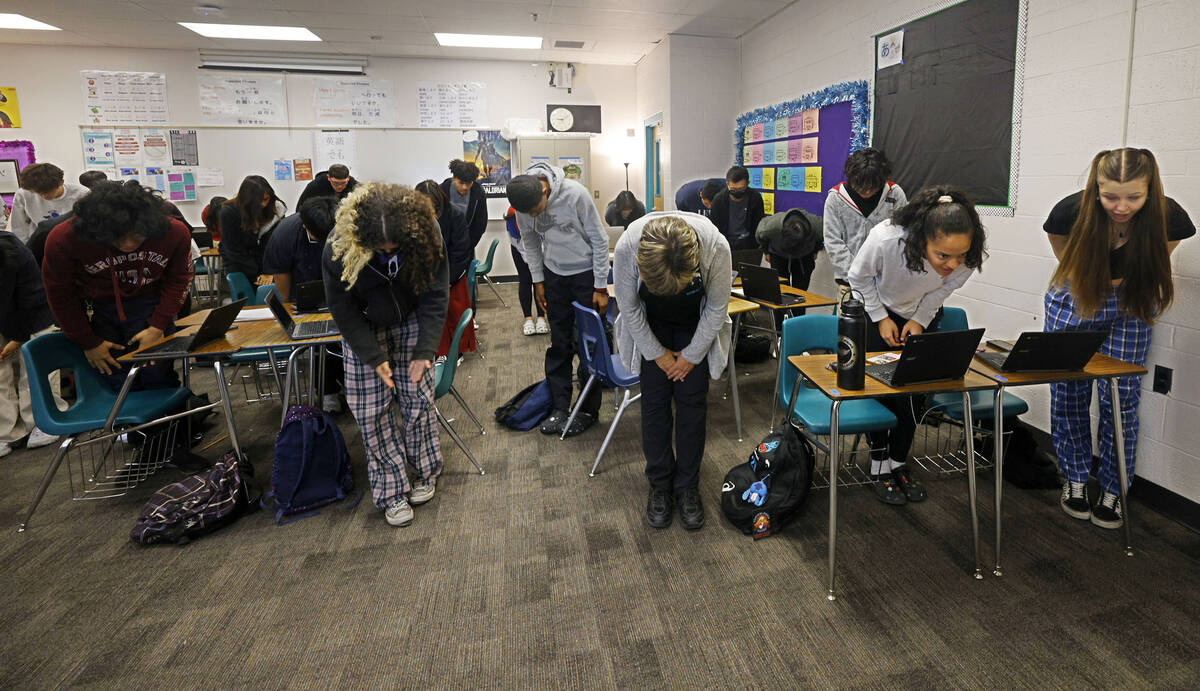 Silverado High School Japanese language teacher Kathryn Breshears, center, bows with her students to greet a Review-Journal reporter during her class, Thursday, Nov. 3, 2022, at the high school in Las Vegas. Breshears taught her students to bow at the beginning of class and at the end of the class just like Japanese schools.(Chitose Suzuki/Las Vegas Review-Journal) @chitosephoto 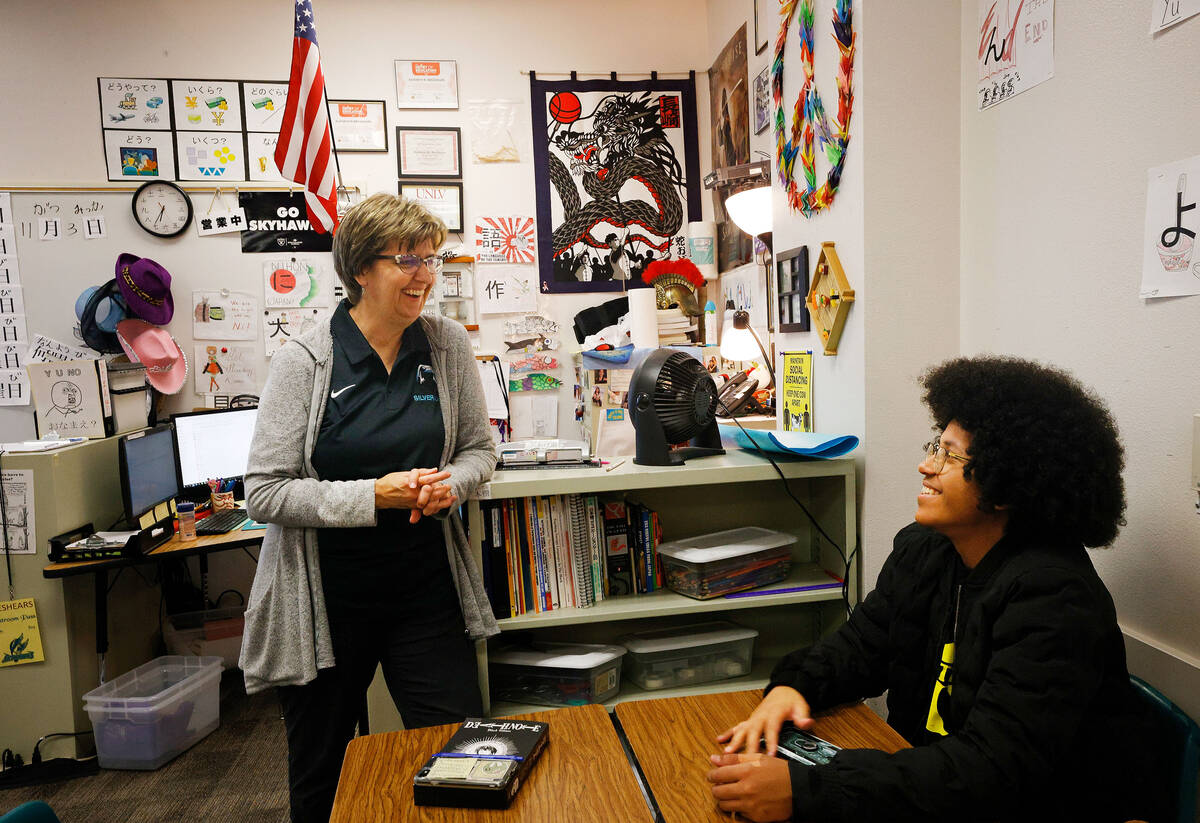 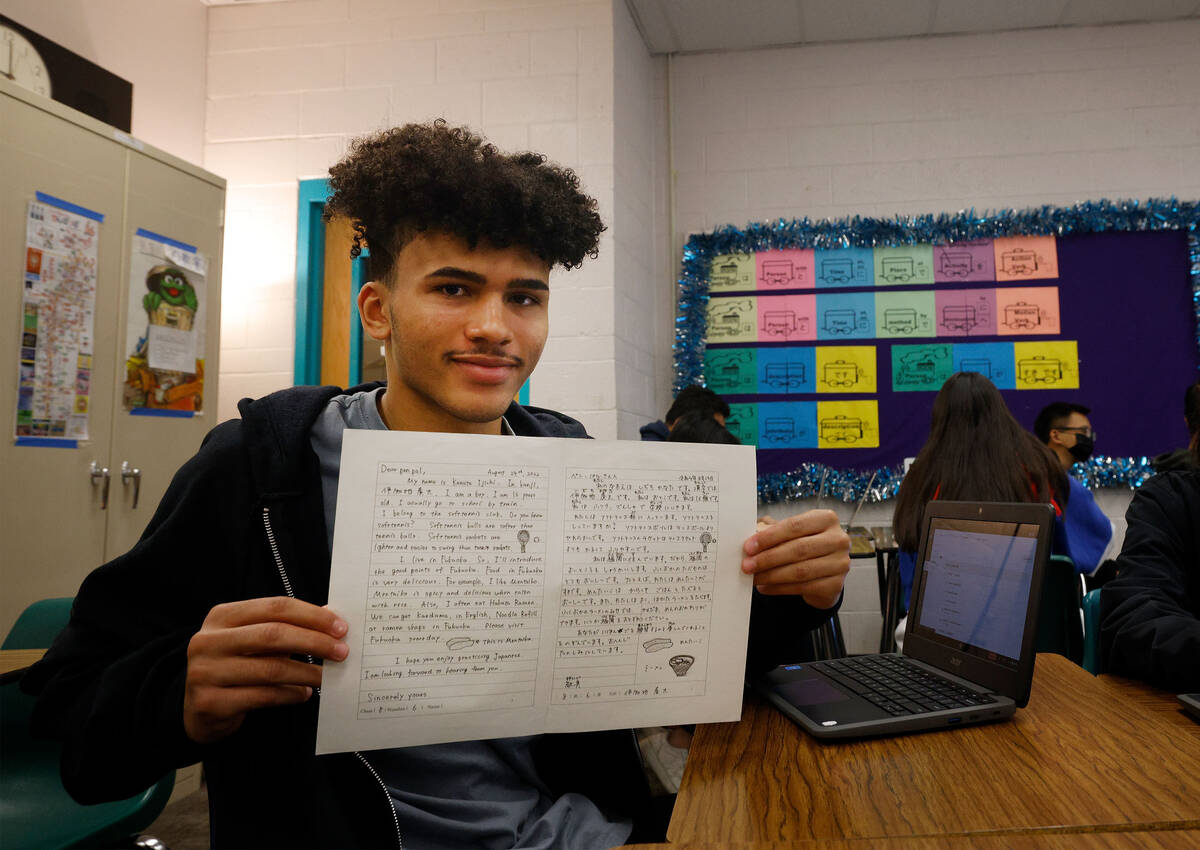 Watching YouTube and playing with the dog. A trip to Universal Studios with family. Listening to “I Want It That Way” by the Backstreet Boys.

The teenagers describing some of their favorite pastimes were not the Las Vegas students at Silverado High School, but their pen pals in Japan, who live roughly 6,000 miles away and a world away.

“It’s interesting to see how the cultures have spread,” Silverado senior Jaden Whiley said. “All these little things that we’re not thinking about that they’re just taking from our culture, and like this mutual exchange. I think it’s kind of cool to see that we’re not the only ones fawning over Japanese culture.”

The students in Kathryn Breshears’ Japanese class at Silverado are in their first year of a pen pal exchange with students at Shuyukan High School in Fukuoka, Japan. Students in Breshears’ second-, third- and fourth-level Japanese classes already have exchanged one round of letters with their peers in Japan and will continue to exchange letters during and after the holidays.

Silverado junior Jason Love says he took Breshears’ class because of his admiration for the Japanese language and its unique cadence, but the pen pal exchange offered him an opportunity to finally converse with native speakers.

“I just think it’s really cool to be talking in Japanese to someone who actually speaks it,” he said. “I was nervous as well about talking to someone, but I saw them try their hardest to talk in English, so I was motivated. … Like OK, I gotta try hard, too.”

More than a decade ago, Breshears signed up on a website where teachers around the world could upload their information and initiate pen pal exchanges with one another.

Nothing came of it at the time, and she forgot about the profile until Yamasaki Toshishige, a teacher at Shuyukan, reached out asking if she would like to be part of an exchange with his students.

The letters coming from Japan were handwritten on lined stationery, many accompanied with pictures of the students themselves, pictures of Japanese boy bands and colorful, hand-drawn illustrations of anime characters.

“I think there’s something special about a handwritten letter,” Breshears said. “To see something that someone has sat down and handwritten and spent time on, and especially seeing the handwriting of the students who, it’s their native language, it’s beautiful handwriting. That kind of surprised me that the students in Japan are willing to do that for us.”

The students at Silverado know how to write in Japanese but typically default to typing on the computer, which is how they delivered their letters to the students at Shuyukan, according to Breshears.

Freshman Kiechi Watanabe felt the typed letters were ultimately not as special as receiving the handwritten letters from his peers in Japan.

“Writing on that paper, the effort and the love that you put into writing it is on paper, rather than typing it out,” he said, holding up his letter from pen pal Aoi Gondo. “So I really like it. I think it’s really cool.”

In her letter to Watanabe, Gondo wrote to educate him about her home in Fukuoka, which she said is famous for its ramen and mentaiko, or marinated fish eggs. Watanabe in turn told her about his favorite hobbies: volleyball, watching anime like “One Piece” and “Attack on Titan,” and playing as his favorite character Terry Bogard in Nintendo’s Super Smash Bros.

Breshears said that, on the heels of the pandemic, during which students in the Clark County School District participated in an entire year of online learning, it’s been difficult to get students engaged and caring about their education.

“It surprised me because, now that they had a purpose to communicate with someone, they were really interested in digging deep and figuring out what they could say about themselves and how they could talk about their own personal interests,” she said.

In the age of social media and text messaging, it also might have been easier for students to communicate online, but because of the time difference between the U.S. and Japan, it wouldn’t be convenient to have the students communicate during the school hour, Toshishige said in an email.

Ultimately, for the students who have learned about Japanese writing systems each day through the colorful posters in Breshears’ class and who have heard the language spoken by characters in their favorite anime, it was an opportunity to make the language real.

“You can make anything an academic exercise, but this makes the language real,” Breshears said.

The letter exchange also offered Watanabe and Silverado junior Marin Lyons an opportunity to reconnect with their culture.

Lyons’ mother and Watanabe’s parents are Japanese, and the students said they took Breshears’ class as a way to better communicate with their families.

Lyons, who attended a Japanese kindergarten, described the experience of writing with students in Japan and learning about their life at school and at home as nostalgic.

But Watanabe recalled a time growing up in America when he rejected his culture, rarely wanting to speak Japanese with his family.

After becoming more attuned to Japanese media like anime, he began questioning why he stopped speaking the language, remembering when he visited relatives in Japan and was unable to converse with them.

“I was really embarrassed. It was really frustrating because I had to get someone else to translate something for me,” he said.

Teaching her students about Japanese culture is also critical for Breshears, who has her students stand up, bow and give a formal Japanese acknowledgment to their teacher — or any visitors — at the beginning and end of class. It’s a small way to demonstrate to the students mutual respect, a value highly prized in Japanese culture.

“I’m not just a language teacher,” she said. “I’m here to teach culture, as well, and how to behave socially appropriately in the target culture.”

For Watanabe, his experience in the class, and in connecting with Gondo in Japan, has served as an opportunity for him to continue building his confidence in conversing in his family’s native tongue.

“It’s a lot of things in one experience,” he said. “I’ve taken away a lot from it, and I’m really happy for it.”