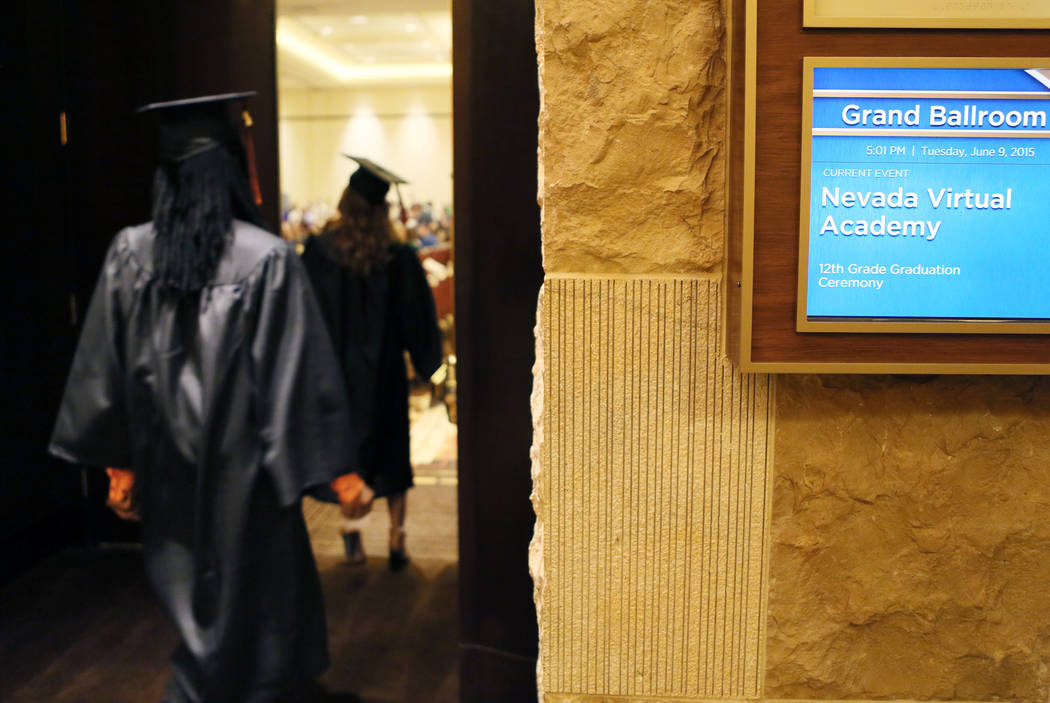 Nevada Virtual Academy high school graduates file into a ballroom at the start of the class of 2015 commencement ceremony at Aliante hotel-casino Tuesday, June 9, 2015, in North Las Vegas. More than 100 students graduated from the full-time online charter school. Some of the students were meeting their classmates Tuesday for the first time outside of their virtual classrooms. (Ronda Churchill/Las Vegas Review-Journal)

The troubled elementary-level program of the Nevada Virtual Academy charter school will remain open if it meets certain thresholds after an agreement Monday with the State Public Charter School Authority.

The online school was at risk of losing its charter contract due to the elementary program’s low performance, which garnered the lowest one-star rating under the state’s accountability system.

Under the agreement, the elementary school must reach an adjusted index score of 34 — up from its current score of 21 — when new data are released around August. Index scores ultimately determine a school’s star rating.

If the school does not reach that goal, it must close its elementary program at the end of the 2018-19 school year.

If it does reach the goal, the elementary-level index score must increase by eight points each following year until the 2019-2020 school year, when it must reach 50 index points — the equivalent of a three-star rating on the five-tier scoring system.

The agreement also caps total enrollment at Nevada Virtual Academy at 2,275 students, including 485 elementary students. The school can request to increase enrollment by up to 10 percent if it meets the targets.

School officials acknowledged the goal was an ambitious one, but had hope that the scores released in just a few months will be good enough to keep the elementary grades open.

“We hope to be able to implement a lot of the needed changes going forward, to be able to be held accountable for what we do and what we do for our students,” said Samantha Morris, president of the academy’s Board of Directors.

But even if the school clears the first threshold, it must continue to improve student performance or face repercussions.

Beginning in the 2020-2021 school year, the academy must eliminate an entire grade level each year that it does not meet goals — starting with kindergarten — and freeze current enrollment.

The agreement also ends litigation that the academy filed in Carson City District Court in April, which claimed there were a number of issues with the potential closure process.

Students and parents were mainly supportive of the school during the authority’s proceedings, describing it as a good alternative to a traditional brick-and-mortar school that adequately suits their needs.

“I have a life-threatening peanut allergy,” he told the authority. “Nevada Virtual Academy has helped me feel safe. I don’t have to worry on a daily basis that I will be exposed to peanuts.”

Nevada Virtual Academy is the third online school in recent years that the authority — charged with overseeing state-sponsored charter schools — has put on notice for potential closure over poor performance. The authority has yet to close any of the underperforming schools, agreeing to an improvement plan with Nevada Connections Academy and switching the performance rating for Beacon Academy of Nevada to align with its at-risk student population.