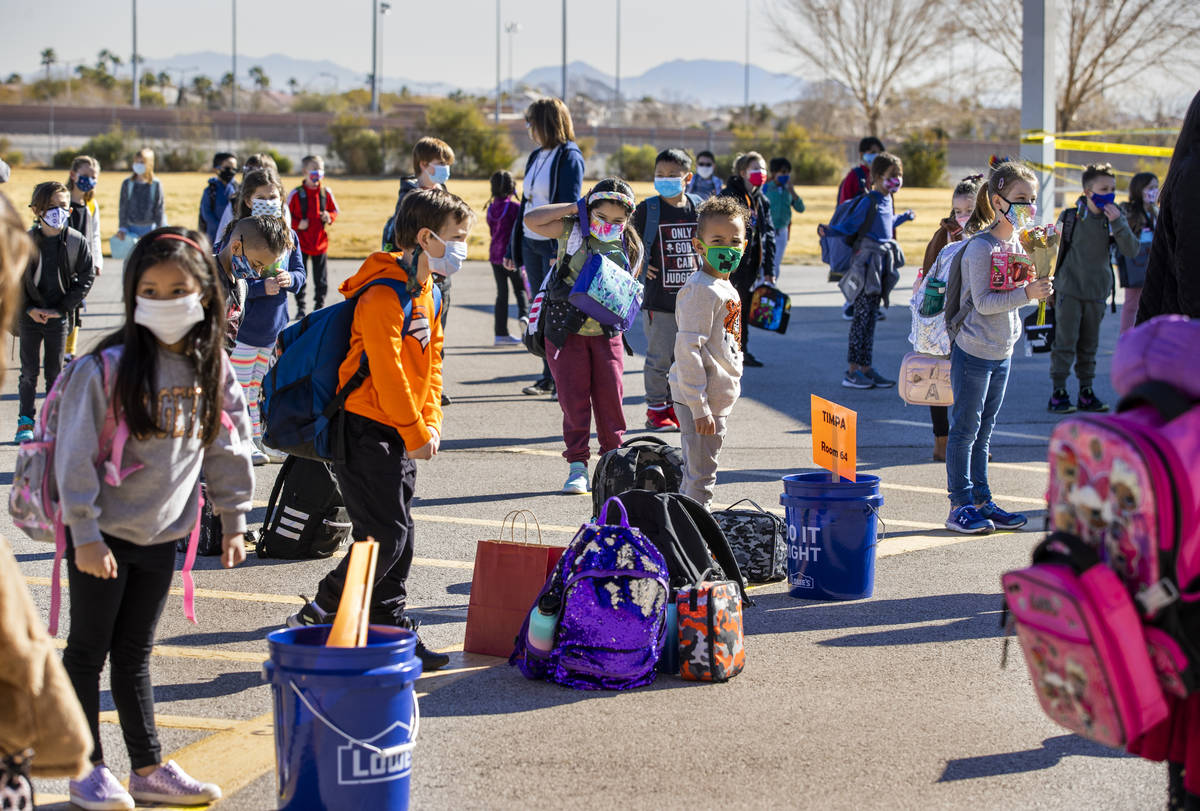 Students stand in lines on the playground assigned by their teachers at Goolsby Elementary School as they return to class on Monday, March 1, 2021, in Las Vegas. (L.E. Baskow/Las Vegas Review-Journal) @Left_Eye_Images 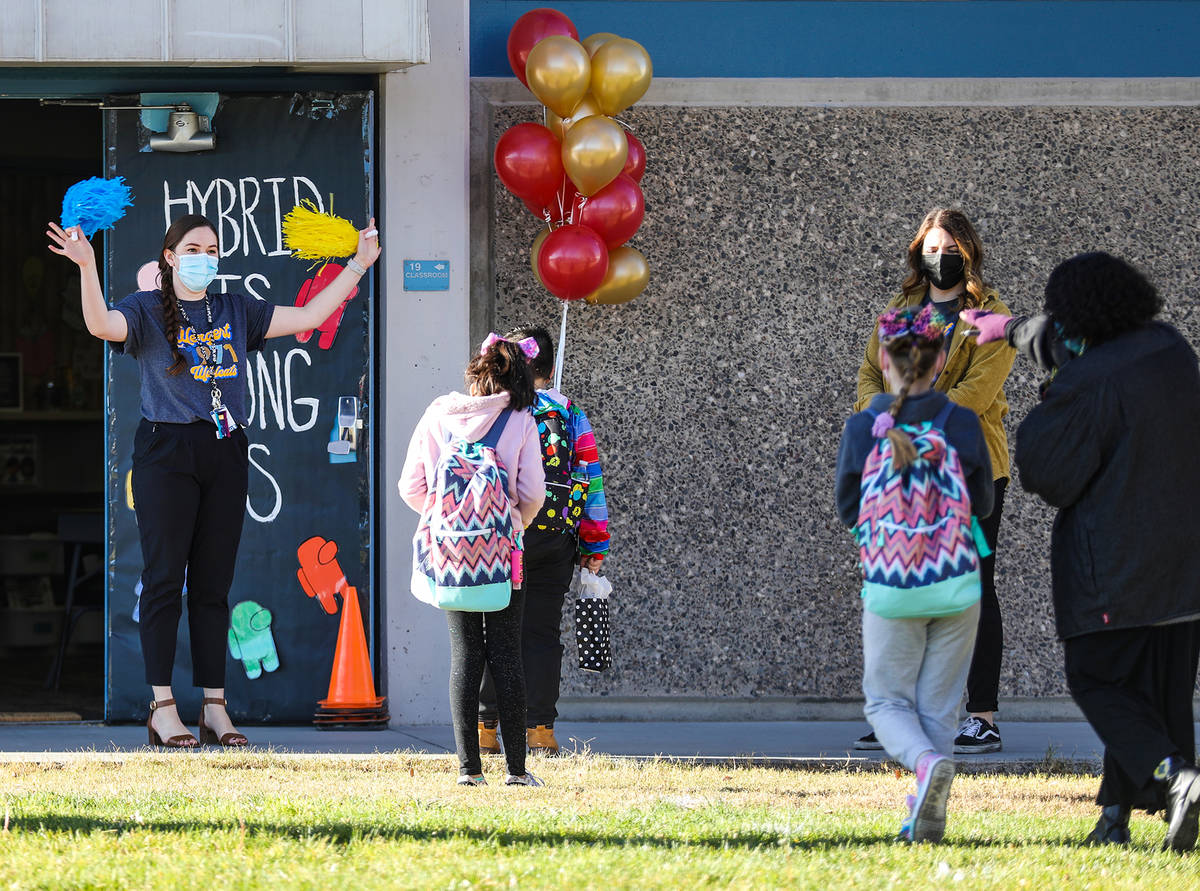 Third grade teacher Shelby Mazza welcomes back her students to hybrid learning at Cyril Wengert Elementary School in Las Vegas, Monday, March 1, 2021. Some young students ranging from preschool through third grade returned this week to a hybrid form of instruction after a year of distance learning forced by the coronavirus pandemic. (Rachel Aston/Las Vegas Review-Journal) @rookie__rae

Clark County schools will use priority lists to determine which students can return to in-person instruction to comply with health and safety requirements, officials said at a news conference Friday.

That could mean some students who want to return may not be able to do so, Deputy Superintendent Brenda Larsen-Mitchell said at the briefing at at Wolff Elementary School in Henderson.

“Prioritized lists will need to occur as we’re still held to health and safety requirements,” Larsen-Mitchell said, adding that schools are tracking requests from students wishing to return.

A Feb. 17 order from Gov. Steve Sisolak allowed schools that offer in-person instruction for at least 20 days to “increase occupancy to 75 percent of the maximum based on the fire code capacity of each space within a school site or 250 people, whichever is less.”

It also allowed schools to reduce the space between students to 3 feet, while adults must still keep a 6-foot distance.

At the elementary schools, which typically have 500 to 900 students and are set to reopen full-time April 6, priority will be given to students who are now in the hybrid instructional model, receiving two days of in-person instruction and three days remote learning, according to Larsen-Mitchell.

Older grades are to be welcomed back in two waves beginning March 22 with sixth, ninth and 12th graders.

Some elementary schools have seen 70 percent to 80 percent of their young students return, Larsen-Mitchell said, but others have experienced much lower rates of return.

Larsen-Mitchell also said eight staff members, working both remotely and on school district campuses, tested positive for COVID-19 this week, necessitating the quarantine of some students. She did not have the number of students in quarantine.

The elementary schools where the staff members are employed are Petersen, Don and Dee Snyder and Jenkins in Las Vegas; Cox and Galloway in Henderson; and Simmons in North Las Vegas.

Superintendent Jesus Jara, who also attended the news conference along with Rep. Susie Lee, D-Nev., said he’s heard positive feedback from the community on the district’s initial week of operations, with families increasingly eager to return after seeing the plan in action.

“As you walk out and walk in on a Friday afternoon, you see how our children are so resilient and they were able to settle into the routine,” Jara said.

Lee used the occasion to urge action on the American Rescue Plan, which has been passed by the House of Representatives and is currently under consideration in the Senate.

The $130 billion earmarked for schools in the plan can be used to reduce class sizes, modify spaces, improve ventilation, and provide personal protective equipment and emotional supports with the aim of reopening schools and keeping them open.

“As we know, Nevada tends to hurt the most when we’re in economic downturns,” Lee said. “We need to diversify our economy. … One of the ways to do that is through education.”

The Clark County School District will allow home fans to attend spring sporting events, with attendance capped at 250 or 50 percent of the venue’s capacity.

Citing the surge of student suicides in Las Vegas, Sen. Catherine Cortez Masto urged two federal agencies to tap into a pot of $122.7 billion for schools in the recently passed coronavirus rescue plan to launch a coordinated effort to curb the alarming deaths.