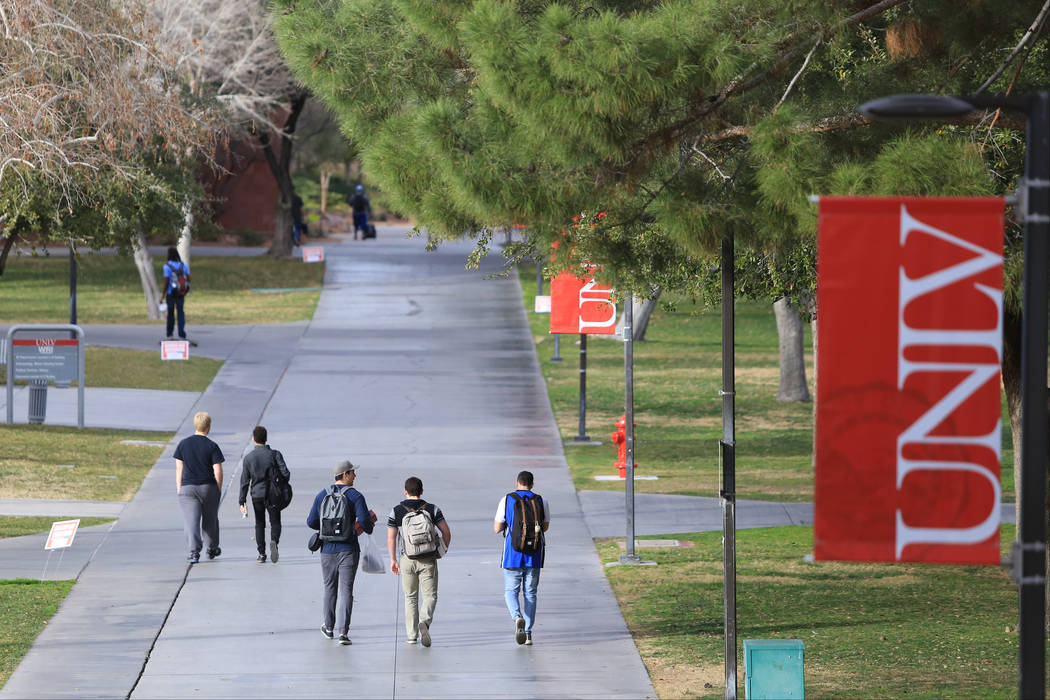 A few weeks after U.S. News and World Report ranked UNLV as one of the most diverse college campuses in the country, another report gave the university average marks for black student access and equity.

Shaun Harper, who co-authored the University of Southern California report, doesn’t dispute UNLV’s place at the top of the recent ethnic diversity ranking but said the designation masks an under-representation of black students.

“Sure, you’re probably one of the most diverse in the world,” said Harper, a professor and executive director of the USC Race and Equity Center. “That’s great … but just not when it comes to black students. Actually you under-enroll them relative to their representation in the population in Nevada.”

In the U.S. News and World Report ranking, UNLV was noted especially for its makeup of Hispanic students at 29 percent. This is the second consecutive year that the university has appeared at the top of the list.

But the USC report highlights that the university’s young black student population — 7.6 percent — does not match up with state demographics. In Nevada, the figure was 10.6 percent in 2016. Harper, and Isaiah Simmons, the report’s other author, gave UNLV a grade of C on this and three other measures. Nevada State College also received a C on enrollment equity, while the University of Nevada, Reno earned a D.

“Across the system we have to do a better job on outcomes overall and for our minority students,” said Thom Reilly, chancellor of the Nevada System of Higher Education, adding that the report is reflective of the new strategic goals established by the state Board of Regents this year.

On Jan. 17, the board plans to hold a one-day student success summit, with an agenda that will be focused on boosting graduation rates and closing the achievement gap between white and minority students.

Reilly said part of the workshop will focus on examining best practices not only within Nevada, but beyond, with plans to bring in educators from the aspirational colleges and universities that NSHE schools have identified.

It’s similar to one of the broader goals that Harper envisions with the release of the report.

“I think it allows those institutions to figure out where to target those interventions, where to target their efforts for improvement,” he said. “I think it also creates a learning opportunity, particularly within state systems of higher education. We talk about how awesome it would be if a state chancellor’s office would bring together all of the schools in a public university system, pick out the ones that have an A, and have them teach everyone else in the system how they have been able to achieve such extraordinary results on that indicator.”

Barbee Oakes, chief diversity officer for UNLV, said parsing data in this way gives universities a starting point to ensure that the strategies being implemented on campuses are targeted to specific student populations.

“There’s not a one-size-fits-all mentality,” Oakes said. “What are the needs that are common across all of our students, and where are some of those specific niches that we need to do more work?”

An early-alert system that identifies UNLV students who are missing classes or are under-performing at the midpoint of a semester, is one new strategy that UNLV officials recently implemented.

Harper and Simmons also examined the enrollment gap between black men and women, and the black student-to-black-faculty ratio on college campuses.

They graded schools on an A-F scale, and then assigned schools an overall equity index score, computing it the way a grade-point average is determined.

Nevada as a whole came away with a middle-of-the-road equity score of 2.0, while four neighboring states — Arizona, California, Idaho and Utah — made the list of the highest performing states. Even so, 200 colleges and universities earned scores below 2.0 — including NSC with an overall score of 1.75. No campus earned above a 3.5.

Edith Fernandez, associate vice president for community engagement and diversity initiatives at NSC, said the small college in Henderson has been intentional about trying to create more pathways for African-American students, and held focus groups last November around this idea.

Transportation issues rose to the top.

“We suspected that,” she said. “Nevada State is a good 20 miles away from the west side or the north side of the valley. To hear it from the students was very important to helping us understand the challenge.”

Fernandez said investing resources into African-American outreach should be embedded into the college’s strategic plan as overall enrollment numbers continue to grow.

The college has experienced a 15 percent increase in student enrollment from last fall.

“Now that we are growing, how do we align our resources to reflect that this is a priority for us?” she said, adding that two summer retreats targeted toward young men of color have been growing over the past couple years.

Meanwhile, all three of Nevada’s public four-year institutions failed to achieve an A on any of the four measures. NSC earned one B on the completion measure, but conversely, an F on their efforts to enroll black men at close to or equal rates of black women. And UNR received two B’s — one for its black student-to-black faculty ratio of 27 to 1.

“The point that we make here is that these institutions are failing black students — too many of them across the country,” Harper said.