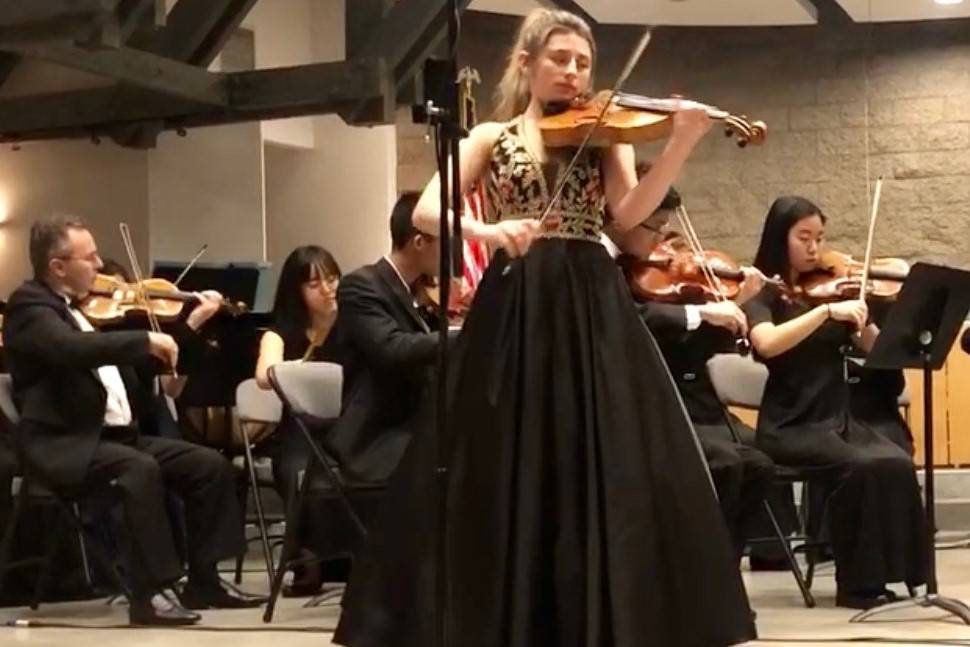 Lourdes Pinney, 16, of Henderson performs with an orchestra. She's among 115 musicians, ages 16 to 19, named in early March to participate in the eighth annual National Youth Orchestra of the United States of America. (Courtesy)

A 16-year-old Henderson viola player is the only Nevada teenager who was selected for a national orchestra.

Lourdes Pinney — a junior at Las Vegas Academy of the Arts — is among 115 musicians ages 16-19 named in early March to participate in the eighth annual National Youth Orchestra of the United States of America.

Meg Boyle, a spokeswoman for Carnegie Hall, said in an email March 18 to the Review-Journal, “We are mindful of what’s going on with COVID-19 and at this point, the program is moving ahead as scheduled.” However, Carnegie Hall announced April 2 it plans to cancel the remainder of its season, including all events in its three venues through July.

The National Youth Orchestra of the United States of America will still meet as scheduled, “but with significant program alterations,” according to a statement. All touring has been canceled this summer, and the ensemble will perform for local audiences during its residency.

The program is free for teenagers who are selected through an application process. The young musicians arrive in New York in early July for an intensive two-week training residency at Purchase College — SUNY.

Led by conductor Carlos Miguel Prieto, the orchestra’s musical program will include Igor Stravinsky’s “The Rite of Spring” and Jean Sibelius’ “Violin Concerto.”

Lourdes found out about National Youth Orchestra from one of her friends, whose brother plays violin and tried out last year.

Lourdes said she was busy at a music camp over the summer and “I completely forgot when school started up.”

She saw an advertisement on Instagram on November that jogged her memory. The problem: The deadline to submit an application — which included performing selected excerpts of music — was a week later.

“I literally practiced so much that week because I really wanted to do it,” Lourdes said. She figured there was no harm in trying.

She talked with as many music teachers as she could to get their insights on the excerpts. “I think that really helped,” she said.

Lourdes — who often goes by her nickname “Lola” — has the perfect combination of natural talent and work ethic, her private music teacher Jennifer Hellewell said.

“Lola is very expressive when she plays,” said Hellewell, who’s a teacher for the nonprofit arts education organization Nevada School of the Arts. “She demonstrates a lot of musical maturity you often don’t see in children her age.”

Lourdes takes weekly private lessons — each of which lasts one hour, 15 minutes. She’s also in her school orchestra and the Nevada School of the Arts’ chamber orchestra, and plays with a quartet.

“She works extremely hard and really cares and responds when I give her feedback and ask her to do things,” Hellewell said.

Lourdes started taking violin lessons in 2007, when she was 3 years old. She started learning violin at the same time as her older sister.

They learned using the Suzuki Method, which teaches young children how to perform on their instrument and their parents are highly involved, Hellewell said.

In middle school, Lourdes switched from playing violin to viola. “My teacher just recommended that I switch because I was really competitive with my older sister,” she said.

It took away the aspect of sibling rivalry, Lourdes said. “I started liking viola a lot.”

Lourdes was home-schooled until sixth grade, so “I had a lot of time to practice on my instrument,” she said. She was enrolled in an online school in seventh and eighth grades before entering high school.

Lourdes has participated in music competitions organized by the Las Vegas Music Teachers Association and has won several of them, including advancing as the represented string player for the southwest district. And when she was younger, she participated in the Suzuki Youth Orchestras of the Americas.

She recently won a concerto competition held by the Nevada School of the Arts. And she has performed with an all-state orchestra and participated in a music program last summer at the Jacobs School of Music in Indiana.

For a while, Lourdes was debating whether to be a music major in college. She has decided she wants to pursue that because “I love going up and just performing.”

Lourdes said she has never liked practicing, though. “That has always been my downfall. I can’t sit for hours and just play. I’m getting better at it because I have a goal in mind.”

Editor’s note: This story was updated April 7 with new information about the status of the National Youth Orchestra program due to the COVID-19 outbreak.

What’s the difference between a violin and viola? Both have four strings, but “viola is a little bigger,” said Jennifer Hellewell, a teacher for the Nevada School of the Arts. She likened viola to being the alto voice in a choir.

“It’s the inner voice,” Hellewell said. “It often plays more of a supportive role in an orchestra or a quartet.”

Many people who play viola started on violin, Hellewell said. Traditionally, people have said there isn’t as much competition when you play viola, “but things have really changed. Playing viola has become a lot more competitive than it used to be.”