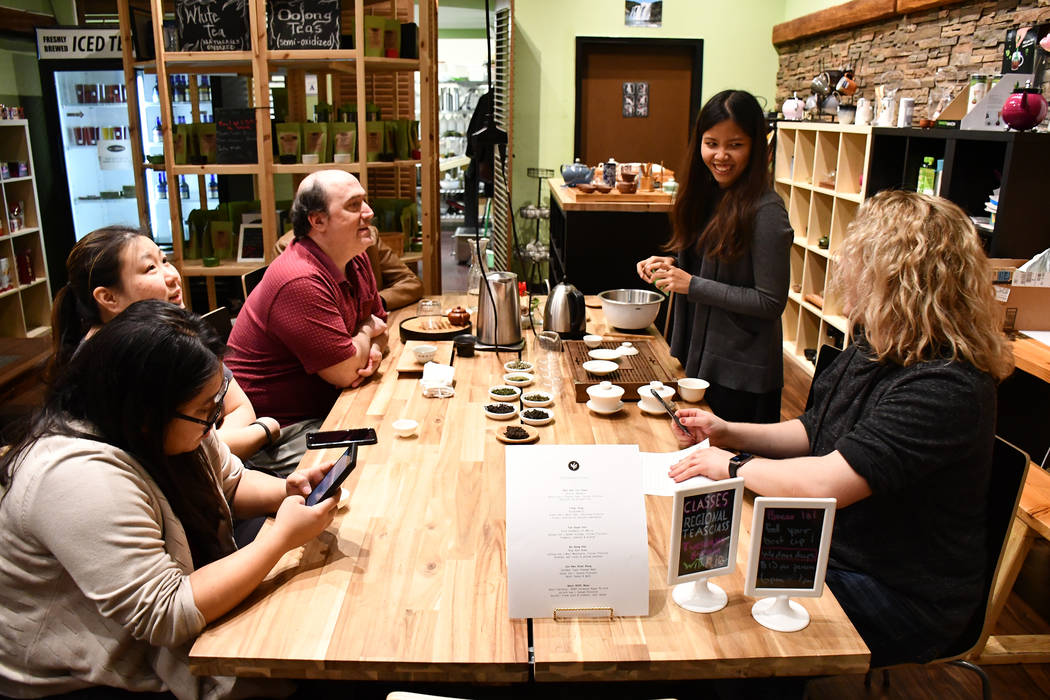 Tea and Whisk, a tea store located at 10271 South Eastern Avenue in Henderson hosts tea classes where participants can learn about teas from different regions of the world. (Daria Bachmann/View) 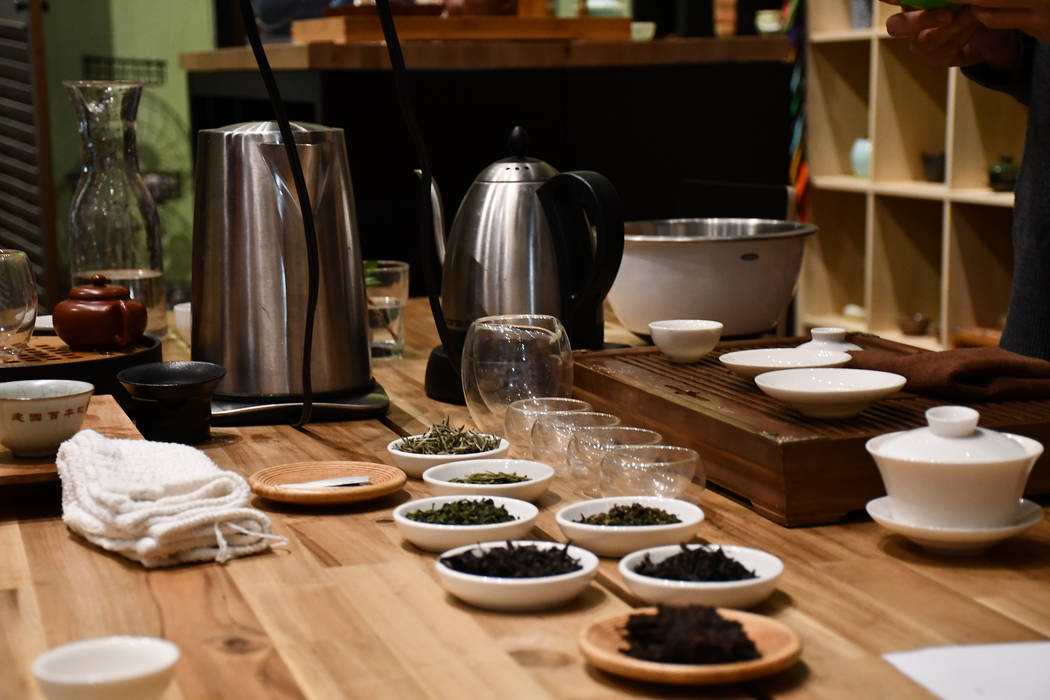 On Jan. 9, Tea and Whisk, a Henderson tea store hosted a class about Chinese teas. Participants could try different flavors, learn about the proper way to brew tea and different regions of China where tea is grown. (Daria Bachmann/View) 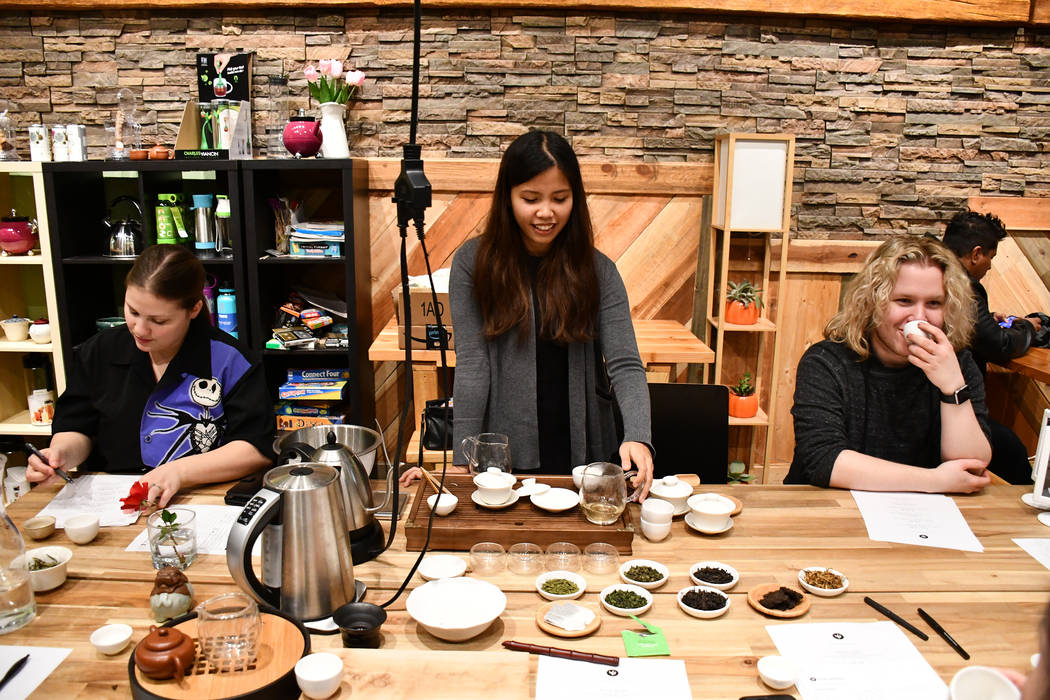 Rie Tulali, a tea teacher and general manager at Tealet, U.S. leader of tea growers, talks to her students about Chinese tea during the Jan. 9 class. Tea and Whisk hosted several classes about different tea regions in January. (Daria Bachmann/View) 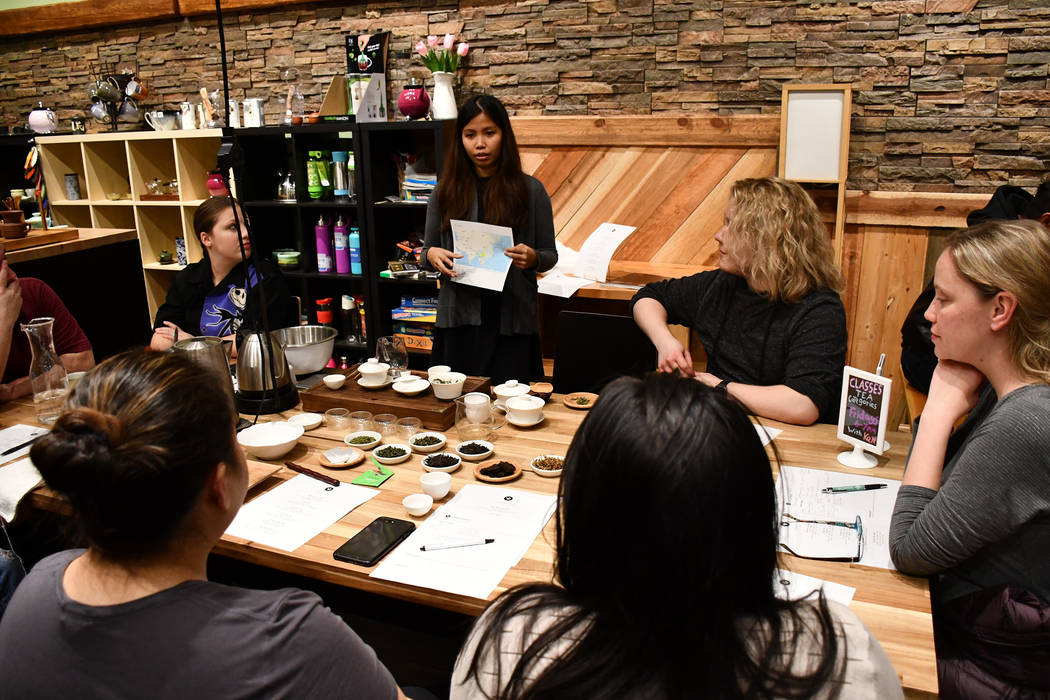 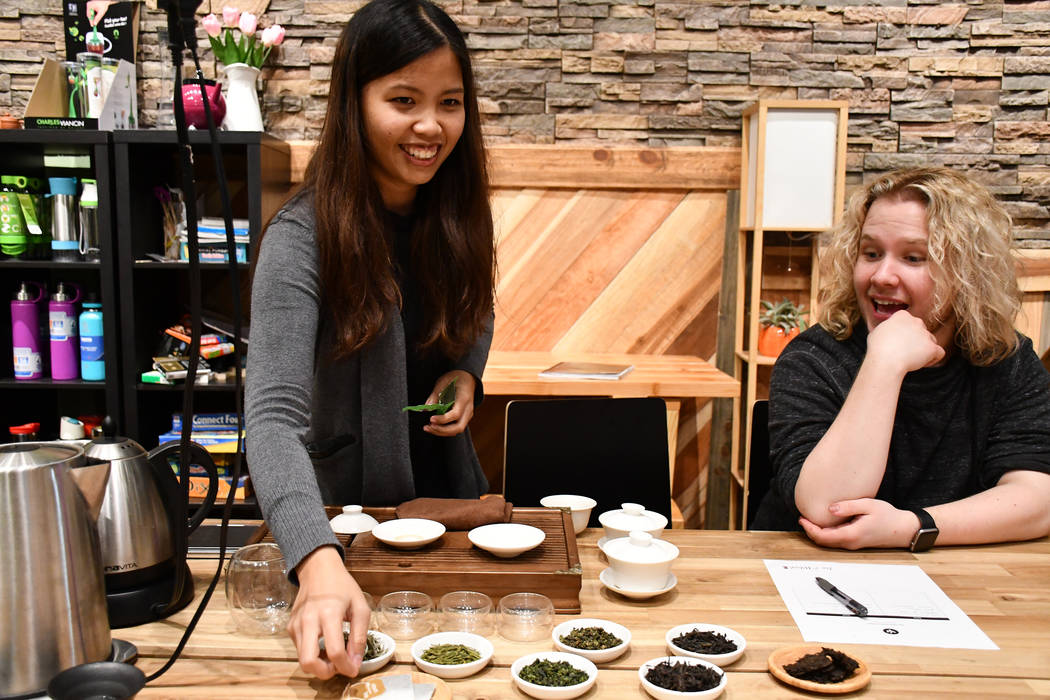 Rie Tuliali, a general manager at Tealet, a grower network specializing in direct trade tea, teaches a class about Chinese tea at Tea and Whisk. Leodianto Lukidi, store owner, said he wants to grow the tea community of Las Vegas with special events and classes about tea around the world. (Daria Bachmann/View)

For Ken Convey, drinking tea is about the social experience.

Convey, a tea-class teacher at Tea and Whisk, a Henderson tea shop, recently was joined by fellow tea enthusiasts for a class about Chinese tea. Participants sampled tea leaves and learned about regions of China where that tea is grown.

Convey, who transitioned to tea after drinking soda for years, said the Las Vegas tea community is growing.

“We are not the biggest, like Seattle or San Francisco, but we are growing very fast,” he said.

Tea and Whisk hosts classes about the culture and brewing of tea throughout the week. Recent classes focused on tea from Japan, Taiwan and Nepal.

Store owner Leodianto Lukidi opened Tea and Whisk in 2016. While he could offer new tea flavors to customers, he said, he had to come up with something else to draw people in.

He decided to shift his focus from product to events. Tea and Whisk has been hosting classes for the past six months, and Lukidi said they have been successful, as 10-people classes typically get filled to capacity. .

During a two-hour class, a group of seven to 10 participants can learn about proper tea cookware and tea-brewing tips, and they can mingle with other tea lovers.

“This is how they would do tea in China,” Convey said, motioning toward the table where students sat down during a recent evening class. “They would sit down, do it kung fu style — which is the type of the tray — and they would sit around and talk about it for a while.”

On Mondays, the shop offers a discount on its matcha tea; on Wednesdays, it holds a tea-brewing class; and on Saturdays, it organizes live music and an all-you-can-drink special.

“Our goal is not sell the product; our goal is to let them enjoy the tea,” Lukidi said. “But part of the problem is even if they buy a really good tea, they went home and they didn’t brew it right.”

Patron Hannah Flower said the found the shop by accident and spent four hours there on her first visit.

Since, Flower has attended over 10 classes and learned about brewing temperatures and other nuances of tea-making.

Kevin Ong, another patron, who was sipping on a cup of freshly brewed tea away from the class, said he enjoys the ambiance of Tea and Whisk more than traditional chain coffee shops.

“I guess the biggest difference I take away from it is I don’t feel like this is a shop that most people would want to come in and order tea and leave immediately,” Ong said. “ … Over here, I feel like it’s a really peaceful and calming environment.”

Lukidi plans to continue offering tea classes this year and hopes to see the tea community in the Las Vegas Valley expand further.

“We created a huge culture now,” he said. “They all know each other; they all come three (or) four times a week … so this is the movement that we started, and I think it’s really, really working.”