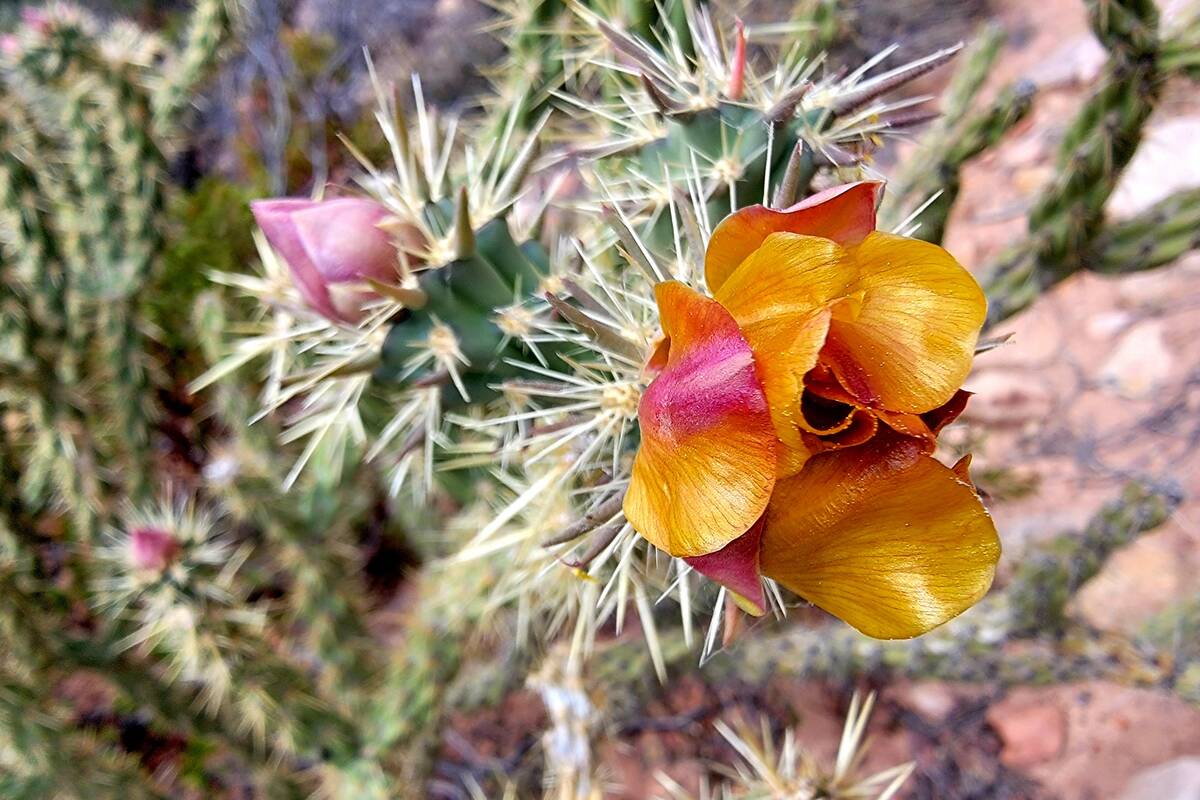 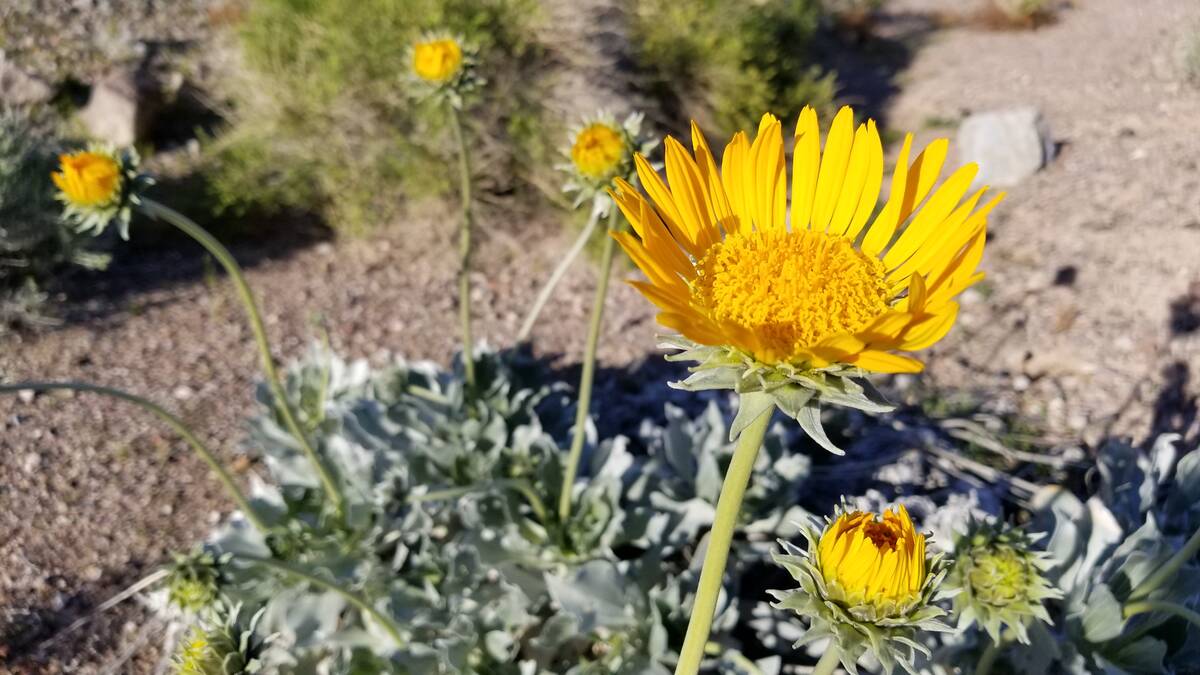 The rare yellow silverleaf sunray is a spring specialty of the Lake Mead area, often standing tall in March along the road just inside the park past the Lake Mead Parkway visitor entrance gate. (Natalie Burt) 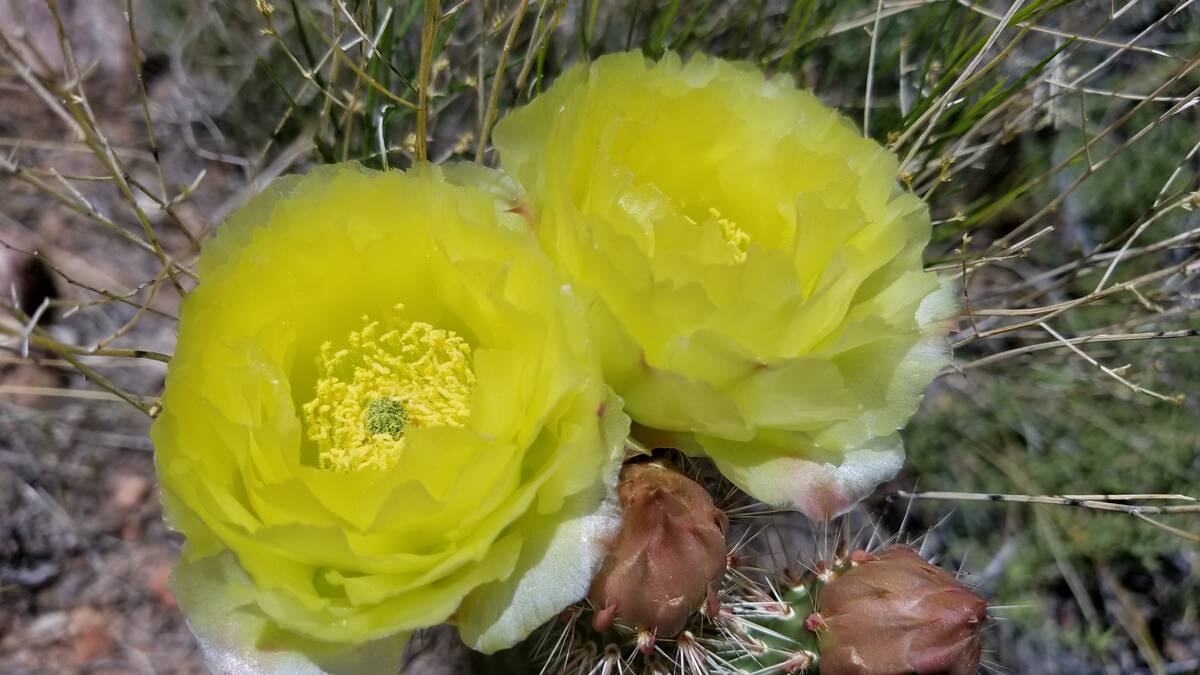 The Mojave prickly pear is an April and May bloomer that's easy to find most years on several trails in Red Rock. (Natalie Burt) 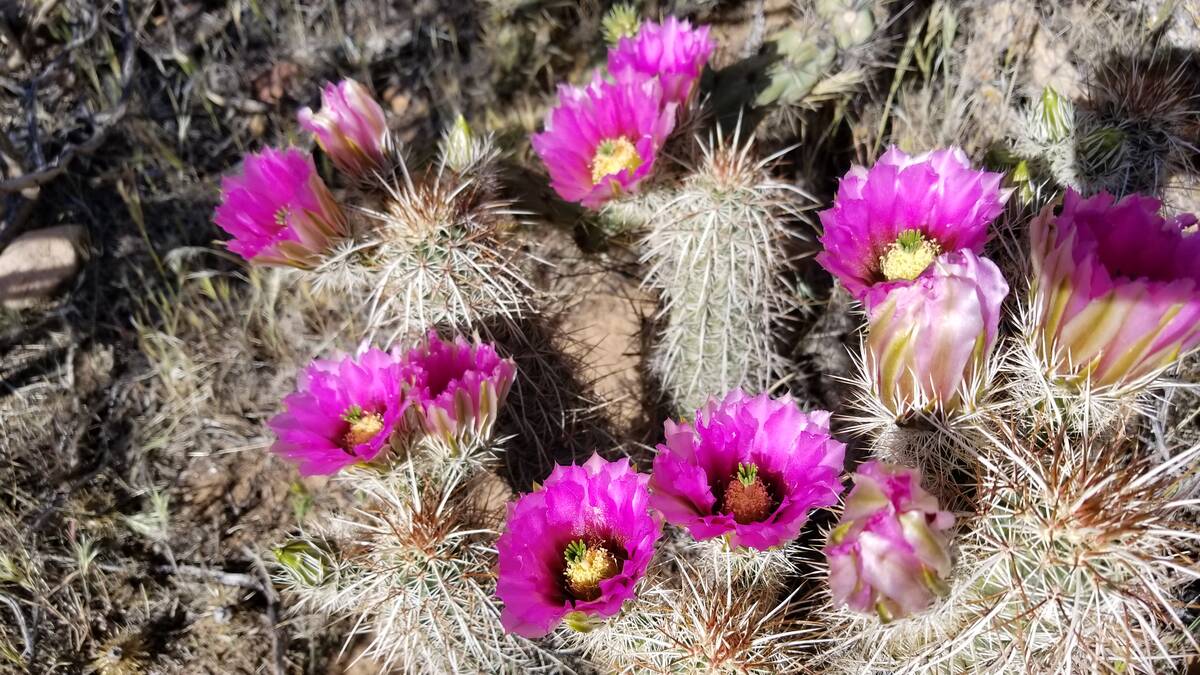 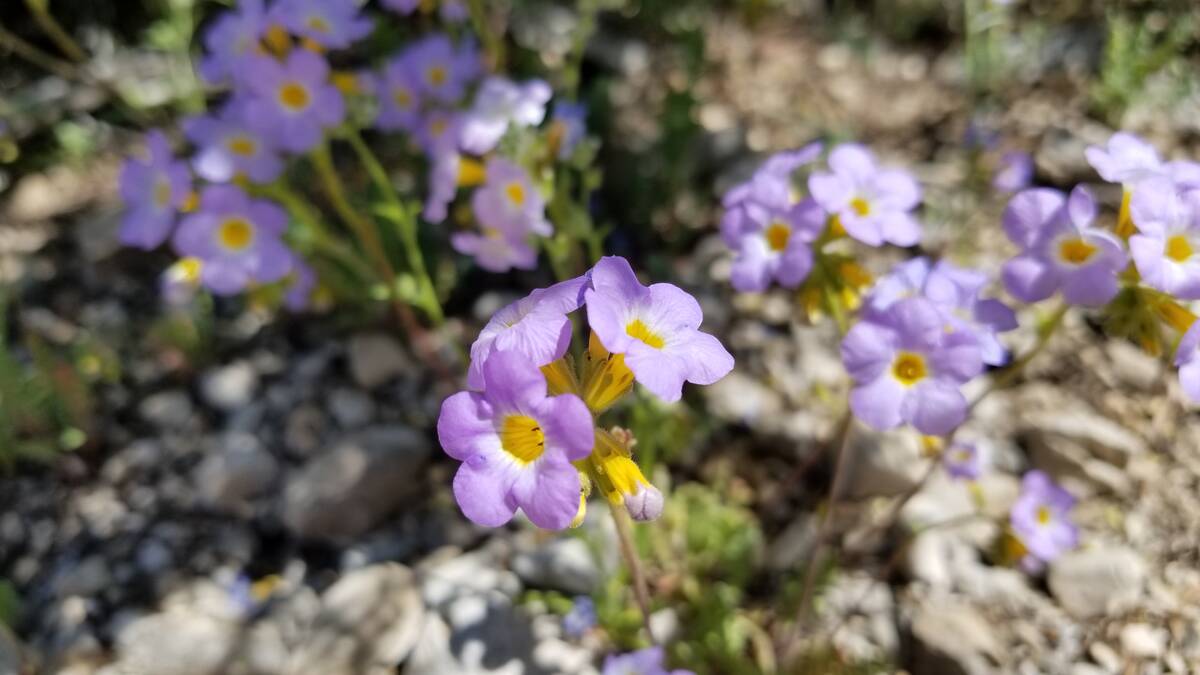 Annuals like these dainty and elegant Fremont's phacelia bloom in the Mojave Desert when adequate rains fall. (Natalie Burt) 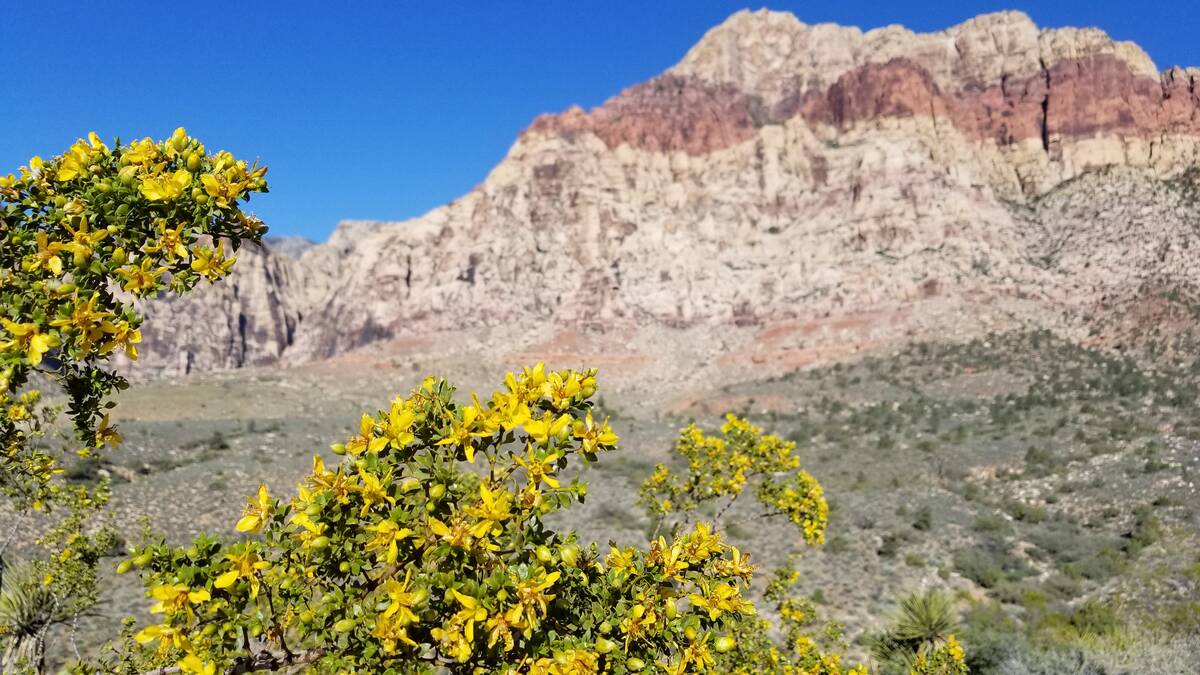 Creosote bushes, with their yellow blossoms, are among the planet's longest living plant species. Some live to be thousands of years old. (Natalie Burt) 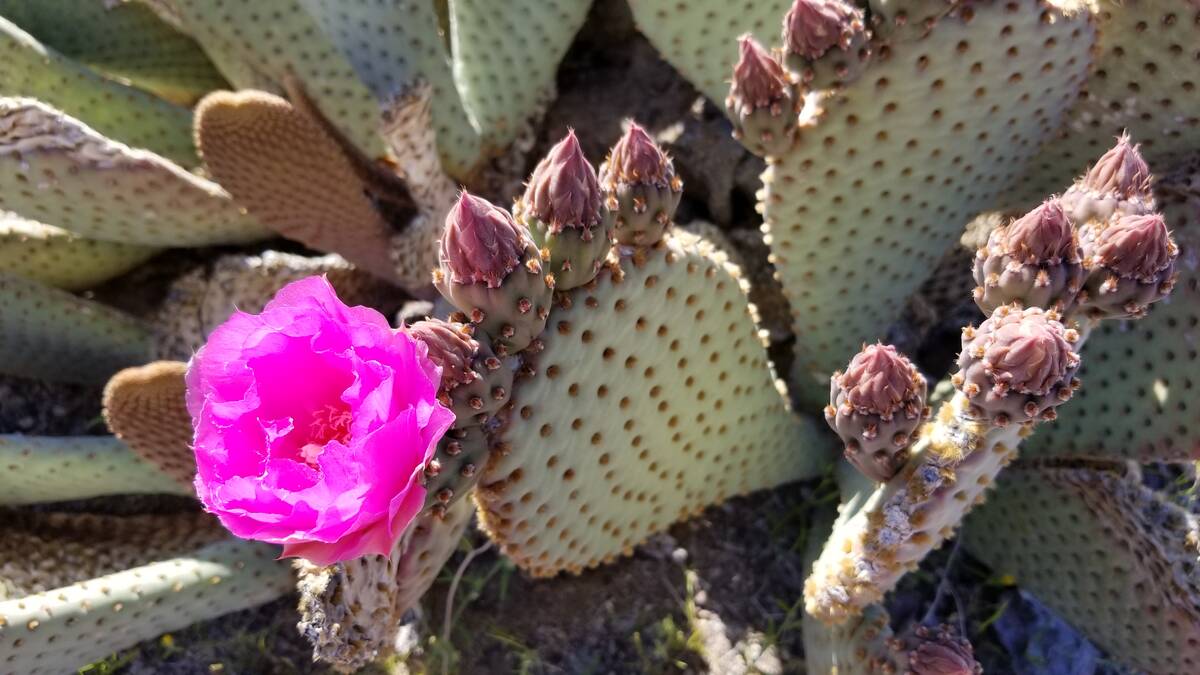 March and April are the best times to see fuchsia blooms of the beavertail cactus at Lake Mead National Recreation Area, as well as in other wild lands of Southern Nevada. (Natalie Burt) 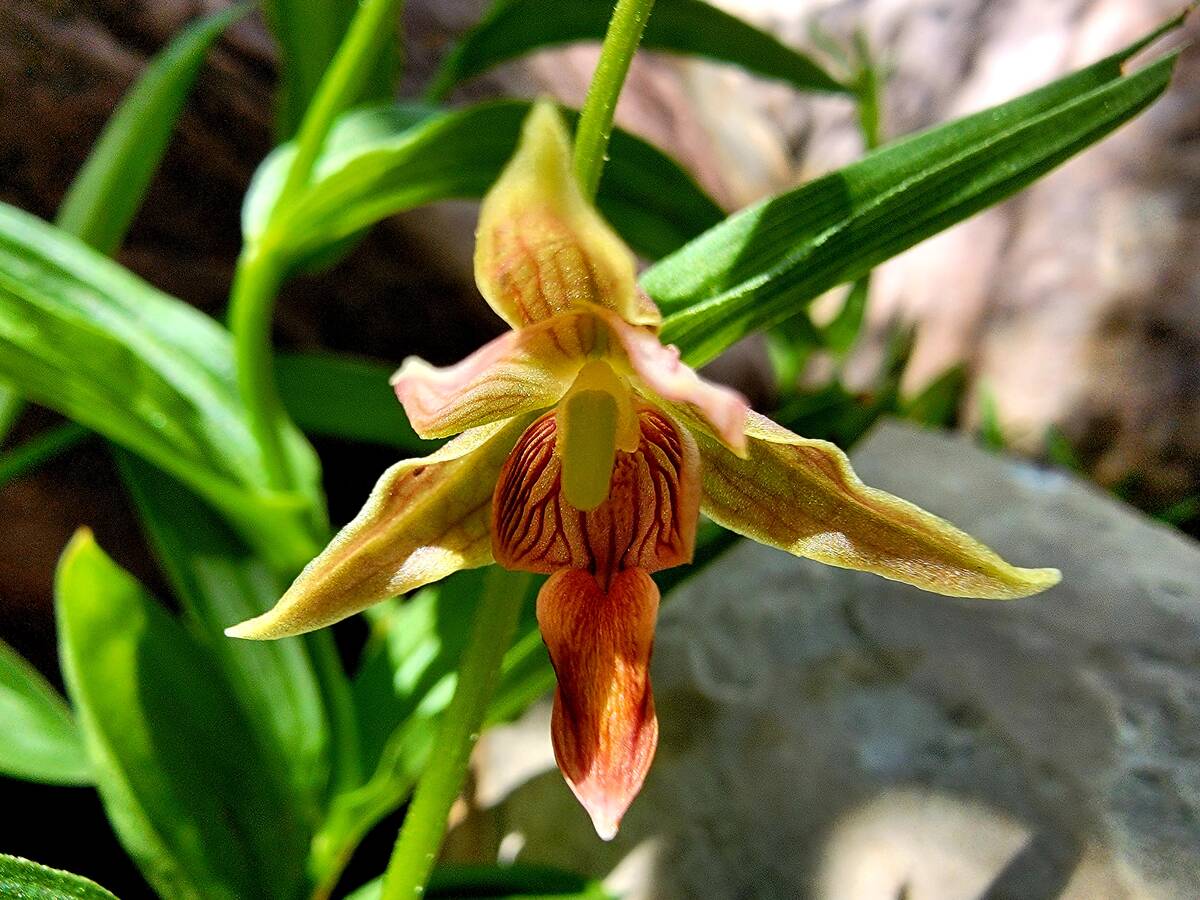 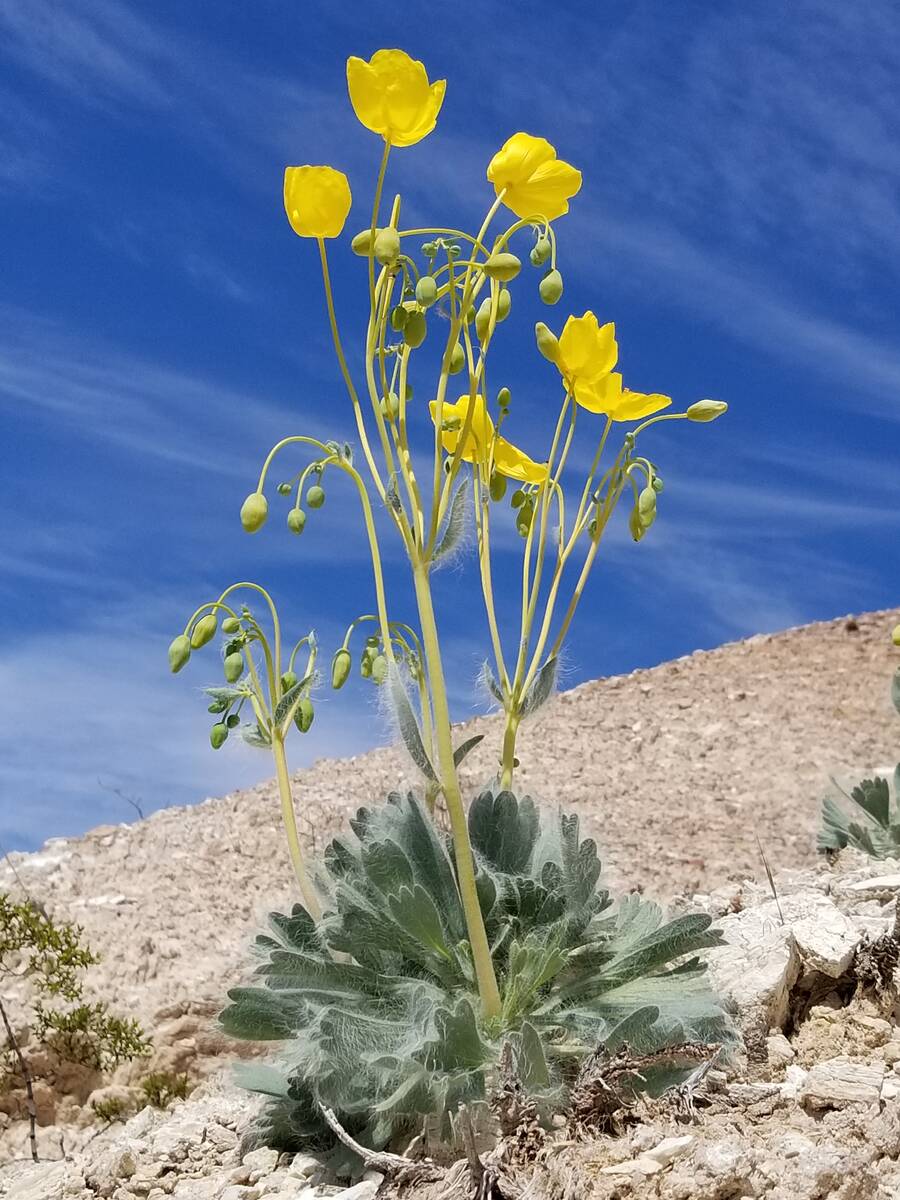 For wildflower chasers, March, April and May mean bursts of magnificent color from seemingly mundane plants in the Mojave Desert. Blooms in burnt orange, fuchsia and soft yellow are gifts from native cactus. The milky white, intricate flower clusters of Joshua trees and Mojave yuccas are part of spring’s display. Hearty perennials like the desert marigold and globe mallow pop with yellow and orange, and Western redbud trees blossom in shades of purple and pink.

Some of the flower fun is expecting the unexpected on a visit to Red Rock Canyon National Conservation Area, Valley of Fire, Lake Mead National Recreation Area or Wee Thump Joshua Tree Wilderness Area near Searchlight. But knowledge about the timing and locations of what typically blooms offers an opportunity to cover more of the desert’s petal scene.

A few emerging Joshua tree and yucca flower buds were spotted during a mid-February hike in the area of Late Night Trailhead. The greenery of wild rhubarb, desert marigold and penstemon was sprouting up along Red Rock trails. But how much of a bounty this year’s blooms will bring remains unclear during these drought-stressed times.

“Where the rain falls and where you see enough rain, that’s where you’re going to see flowers,” said Lara Kobelt, a botanist and natural resource specialist for the Bureau of Land Management. “It seems like there are places where we have gotten enough rain where we will probably see some spring wildflowers.”

Rain was scarce in 2020, when Las Vegas went a record 240 consecutive days without measurable rainfall, so few flowers bloomed in spring 2021, compared to previous years.

Precipitation is critical in the fall and winter to prepare plants for flowering in the spring, Kobelt said. She is hopeful the 2022 desert bloom will outshine last year’s and recently spotted the good sign of evening primrose leaves poking out of the ground. But when pressed for a flower forecast, she also warned, “It still is looking pretty dry out there.”

Dainty and rare annual flowers may be missing from this spring’s mix, remaining instead as seeds in the ground because of poorly timed rains and drought stress. Yet stronger Mojave Desert plants will still produce, even if their quantity of blooms is limited.

With calendars announcing the arrival of spring, desert flower fans might want to begin plotting where they intend to show up with camera in hand to capture images of 2022’s petal scene. Here are some tips:

Lake Mead National Recreation Area has a couple of stunning, sky-reaching yellow flowering plants that camp out in gypsum-rich soils and shouldn’t be missed during the second half of March. The tall silverleaf sunray looks like it’s straight out of a Dr. Seuss book and is visible along the road just inside the park near the Lake Mead Parkway visitor entrance gate. Farther into the park, elegant Las Vegas bearpoppies stretch upward from a wash area near the Pinto Valley and close to mile marker 18 along Lake Mead’s Northshore Road. Las Vegas bearpoppies also can be seen outside Lake Mead’s boundaries in the Rainbow Gardens Trail area, which is off the beaten path and on the east side of the Las Vegas Valley. Kobelt said these rare plants are tough and tend to flower despite drought stress in part because any rainfall is likely to sink deeper into their gypsum-heavy soils. “Both of those flowers are spectacular and really unique to the area,” she added.

Waxy and milky blooms of Joshua trees, Mojave yuccas and banana yuccas will be visible in the many spots where those spiky plants grow in Southern Nevada. Red Rock Canyon National Conservation Area and Wee Thump Joshua Tree Wilderness Area near Searchlight are two spots worth checking in March.

Blossoms of Western redbud trees begin opening later in March and can be spotted where water pools and flows in greener Red Rock areas such as Oak Creek, Pine Creek, Ice Box and Lost Creek canyons, as well as Kraft Mountain loop in the Calico Basin Red Springs area. They are established trees and typically don’t skip sharing their beauty. “Those are just some of the most glorious flowers,” Kobelt said.

Other reliable bloomers in late March at Red Rock include the peach flowers of wild rhubarb, the silvery blues of amsonia and the bright reds of desert paintbrush and penstemon. At lower elevations like Lake Mead, yellow brittlebush and creosote are already blooming, and beavertail cactus flowers in bright pinks will make an appearance (fingers crossed for a decent one).

Everything from bold cactus flowers to graceful stream orchids are possibilities during the second half of April through mid-May along Red Rock’s Pine Creek trail. Hedgehog, beavertail and Mojave prickly pear cactus blooms typically are seen on hikes to the pools and stream areas where orchids grow and chorus frogs swim.

The same trio of cactus flowers may be seen on several other trails off Red Rock’s busy 13-mile driving loop. A fourth plentiful cactus species, the buckhorn cholla, adds its burnt orange blooms to the mix in May, as the fuchsia and yellow blooms of the others begin to run out. They also can be seen on hikes starting at the Late Night Trailhead and in the Fossil Ridge area across state Route 159 from the Red Rock loop’s entrance.

Creosote bushes, blossoming in yellow throughout Southern Nevada in spring, are among the planet’s longest-living plant species because of their survival skills. Some live to be thousands of years old.

“I think our creosote bush is probably the one that’s most impressive to me,” Kobelt said. “It’s ubiquitous. It’s so important to our wildlife species. It’s a bigger shrub that provides cover in the summer. That’s basically like a tree for our tortoise.”

Spring is the time to gain a greater understanding of the Mojave Desert and to enjoy its flower magic and survival stories. 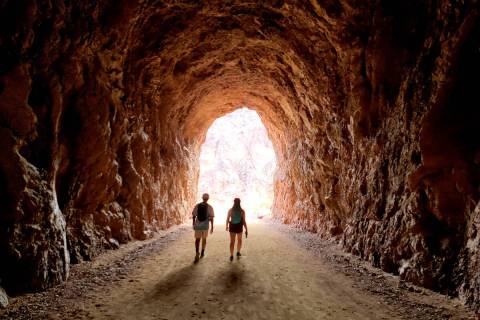 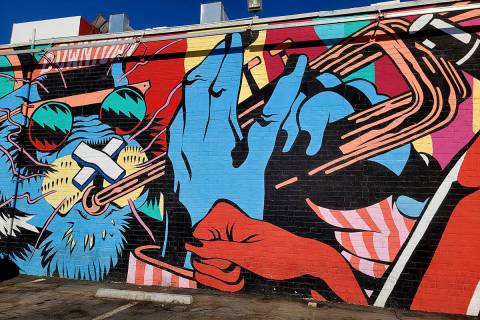 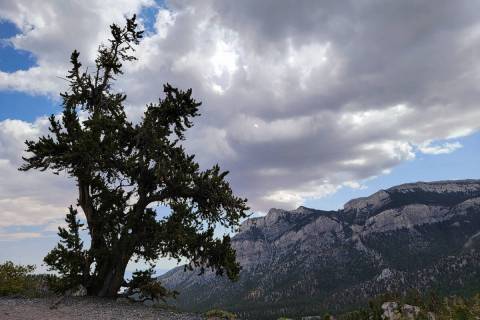 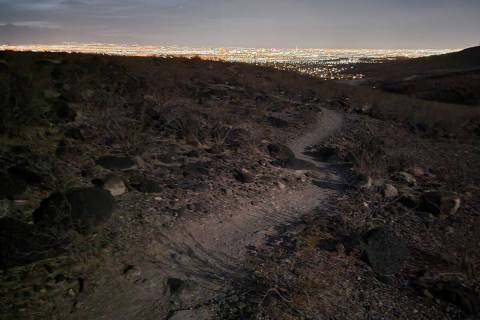 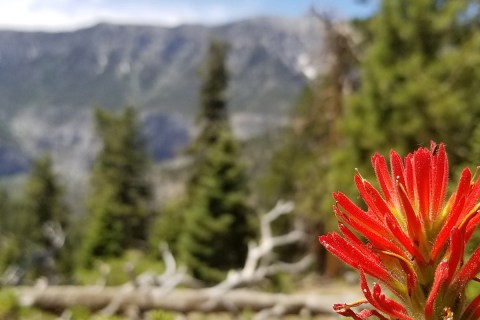 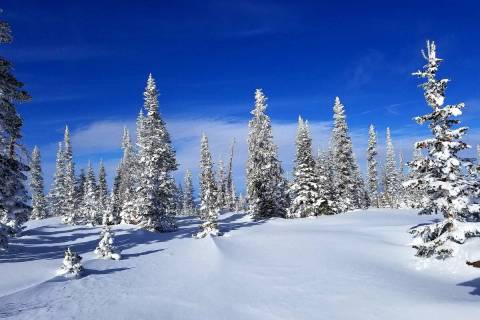