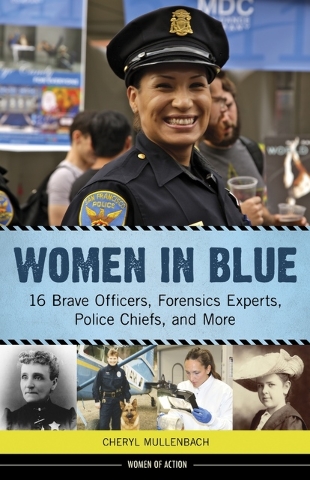 The law’s the law.

You’ve known practically since you were born that rules were not made to be broken. In fact, they were made for a reason — even when it’s hard to make them stick. That’s especially true now, just as it was 100 years ago or more, and in the book “Women in Blue: 16 Brave Officers, Forensics Experts, Police Chiefs, and More” by Cheryl Mullenbach, you’ll read about pioneers who helped enforcement.

When a young dance hall girl took her own life in despair, the Woman’s Christian Temperance Union became concerned about the lack of support for women and children in the Wild West. It was 1888, and the WCTU convinced the city to appoint someone to create a safety net for those who had none. Likens was their woman.

But it wasn’t easy for her. Though people loved her, and she did the job she was hired to do (as well as cleaning, cooking for male officers, party-planning and jail-tending), she became innocently embroiled in a scandal that threatened to spoil everything.

In the early 1900s, Los Angeles had their “City Mother’s Bureau” to keep teenagers out of trouble. It was backed by “wealthy society ladies” and run by Althea Gilbert, who started out taking care of women prisoners but who knew that juveniles needed a “second chance,” too.

In 1912, New York’s Isabella Goodwin went undercover to solve crime, doing the work of a detective but without the title or salary. Moira Smith lost her life on Sept. 11, 2001, while helping people to safety. And Chicago’s first policewoman, Grace Wilson, was also the city’s first African American policewoman in 1918.

Mention police officers to a preteen, and she may conjure up an image of an officer in a patrol car or walking a beat. “Women in Blue” will change that perception, and then change it again.

Unless your family includes a long line of law enforcers, it may come as a surprise for your child to learn about “matrons” in the Wild West, early forensics practitioners or undercover officers in the Jazz Age, but Mullenbach tells those stories well. Young readers will also be thrilled by accounts from women who were jailed in facilities meant for men, and by African American voices from Jim Crow years. These and other stories and sidebars span three centuries, and Mullenbach helpfully includes resources so your child can learn more.

For an adult, this book is a quick, worthwhile read, but it’s really meant more for kids 12 or older. If there’s a young crime fighter, lawmaker or future patrolwoman in your family, “Women in Blue” will be quite arresting.