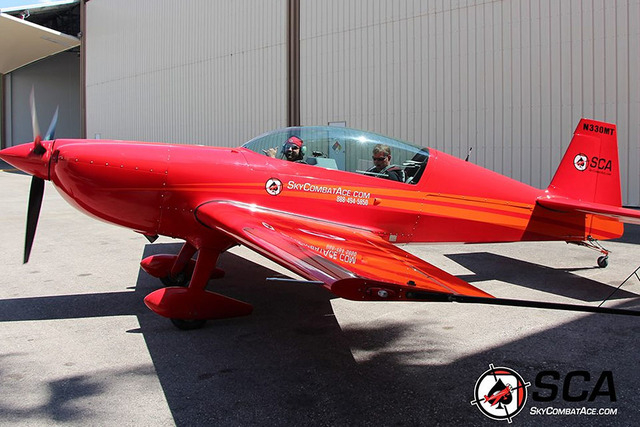 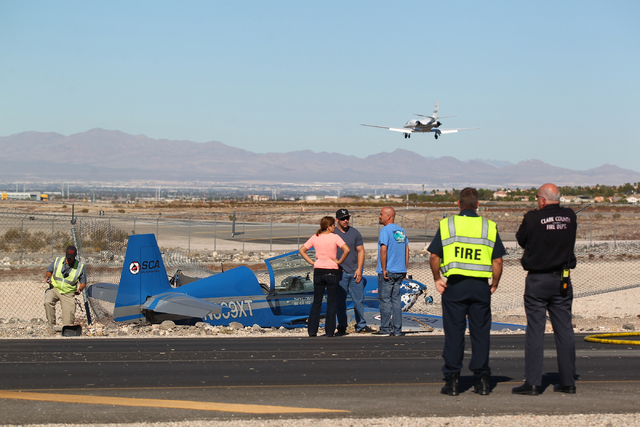 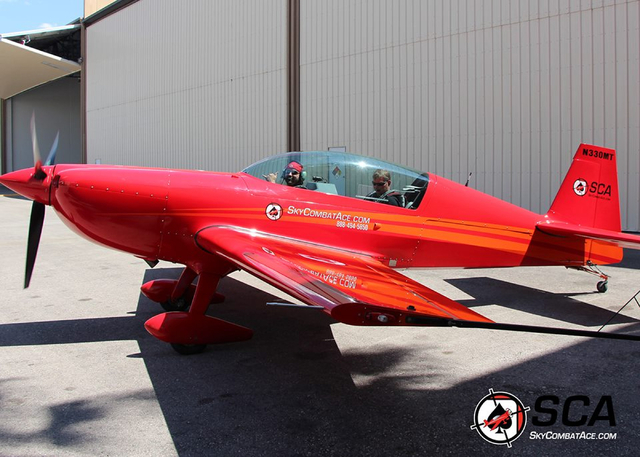 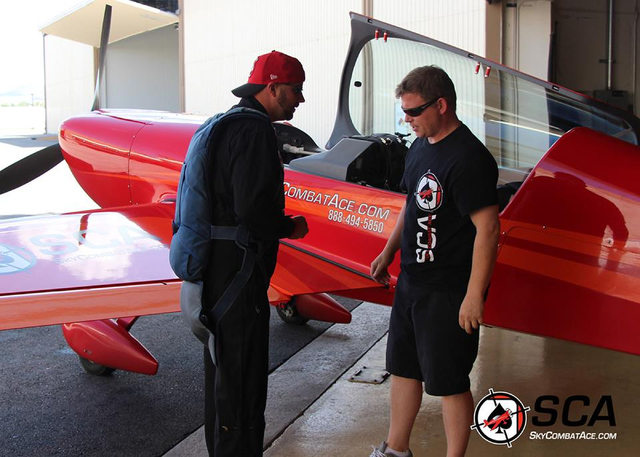 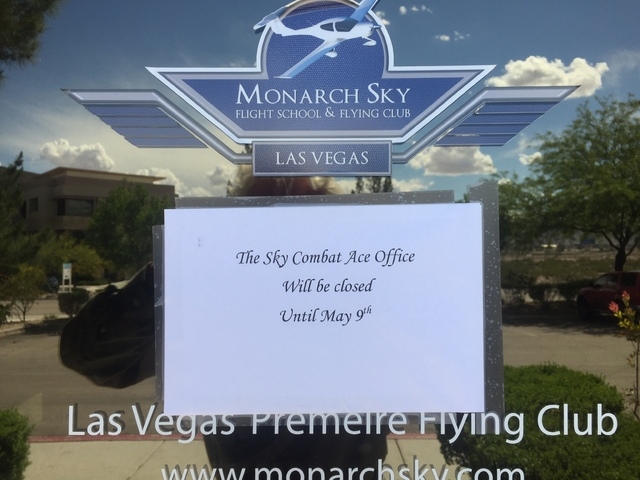 A note taped to the entrance Monday, for Sky Combat Ace and Monarch Sky offices near Henderson Executive Airport says Sky Combat Ace's office will be closed until May 9. A Sky Combat Ace instructor pilot was one of two men killed Saturday when a single-engine stunt plane crashed near Jean. Keith Rogers/Las Vegas Review-Journal

It came down to going out in the stunt planes or losing more than $8,000 they had ponied up for their Sky Combat Ace adventure.

Twelve guys were in Las Vegas for a bachelor’s party Saturday. Nine of them had planned on going on an “adrenaline rush” ride, as one aviation lawyer puts it, to become “student” fighter pilots for an hour in a single-engine Extra EA300 aircraft. Student passengers sit in the front seat of the cockpit while an instructor pilot controls the aircraft from the backseat.

But with thunderstorms lurking near Henderson Executive Airport about 4 p.m. Saturday, twin brothers Steve and Chris Peterson and others in the party, including Dan Lichau, questioned the Sky Combat Ace refund policy. It says essentially customers must go on the flights with the company’s instructor pilots or forfeit their fare money.

“We thought this was going to be a fun bachelor party and it turned out be the worst nightmare any of us had ever experienced,” he said Tuesday night.

He said his buddies had planned to go on the Sky Combat Ace flights months in advance and had paid a deposit.

Steve Peterson, 32, of Rohnert Park, California, was killed Saturday when one of the three Sky Combat Ace stunt planes the group had hired crashed near Jean.

The crash, which is under investigation by the National Transportation Safety Board and the Federal Aviation Administration, also killed Ben Soyars, 37, of Las Vegas, the instructor pilot.

Steve Peterson “was my son’s brother-in-law that was a passenger, not a student,” Larry Delp, of Las Vegas, wrote in an email to the Las Vegas Review-Journal. “He died because of greed of the owner.”

Delp said the group questioned the company’s staff about the safety of flying in what they perceived as adverse weather conditions.

“This is a tragedy that should have been avoided. … The boys did not want to fly because of the weather,” Delp said.

Another person familiar with the bachelor party, Donna Fraley, said, “They all pitched in on the cost of the trip and a couple of guys couldn’t go.

“They were all going to back out because of the weather,” said Fraley.

At the time of the ill-fated flight, there were thunderstorms north and east of where the crash occurred near a dry lake bed, National Weather Service meteorologist Todd Lericos said. At 4 p.m. Saturday at the Henderson airport, there were north-northeast winds at 12 mph and thunderstorms about 5 to 10 miles from the airport.

The weather might or might not been a factor in the crash, said Lericos, adding the National Transportation Safety Board will determine that.

Nevertheless, the weather was a factor in some of the group members’ decisions not to fly.

When they arrived at the Sky Combat Ace hangar they were told by the company’s president, Richard “Tex” Coe, a former Air Force F-16 fighter pilot “that we were flying, rain or shine,” Lichau said.

They were also reminded of company’s refund policy. It states that Sky Combat Ace “flights are nonrefundable inside of 48 hours. SCA is not responsible for any changes, delays or rescheduling due to unscheduled maintenance, inclement weather, the actions of independent contractors, or Acts of God.”

Gary Robb, a well-known aviation lawyer in Kansas City, Missouri, said Tuesday the nature of the stunt-plane thrill ride business in light of the weather made for “an accident waiting to happen.”

“They should not have gone and should have taken legal action on the refund on the basis of a dangerous condition, namely the weather,” said Robb, who has represented victims and their families in a number of high-profile aviation-accident cases in the Las Vegas Valley.

“It is ludicrous to allow nonexpert student pilots to be fighter jet pilots for a day,” Robb said.

He added that even though Sky Combat Ace claims it allows student passengers in some cases to fly an aircraft with an instructor’s supervision, the instructor pilot “never, never relinquishes control of the aircraft.”

But Tuesday, Megan Fazio, publicist for Vegas Extreme Adventures, the marketing arm for the company doing business as Sky Combat Ace, said the “weather was not an issue” where the planes flew their simulated combat and bombing run routines Saturday.

“The video shows clear blue skies but I can’t release it” because of the ongoing investigations, she said.

A company statement about the crash notes its “incident-free” record.

“Vegas Extreme Adventures LLC has been providing instructional aerobatic airplane rides to the general public since 2011 and has conducted over 15,000 incident-free flights over the last 5 years,” the statement reads.

However, a Sky Combat Ace aircraft was forced to land on a street while approaching Henderson Executive Airport on Nov. 5, 2014, when a pilot, who was not named, “experienced a partial loss of engine power,” a National Transportation Safety Board report said.

“The airplane’s right wing was substantially damaged; the commercial pilot and single passenger were uninjured. The airplane was registered to Unmanned Systems Inc., and operated by Sky Combat Ace,” the report reads. “The pilot stated that the center fuel tank was ¾ full (17 gal capacity), and the wing tanks were empty.”

A former B-47 bomber pilot who was a student passenger on a Sky Combat Ace flight in March said that after his simulated bombing run came within 10 to 20-feet of the surface at 200 mph he recommended to Coe that inexperienced students would be exhilarated flying at 100 feet above the surface without the too-close-to-the-ground safety risk.

“I felt very uncomfortable,” said Leo May, 84, who flew B-47s for the Strategic Air Command.