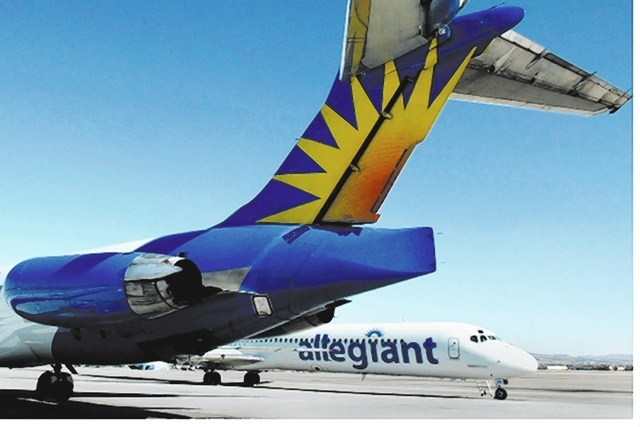 A Las Vegas flight (not pictured) bound for Duluth, Minn., had to return to McCarran International Airport this week after being swarmed by bees. (Las Vegas Review-Journal, File)

A Las Vegas flight bound for Duluth, Minn., had to return to McCarran International Airport this week after being swarmed by bees.

The Allegiant Air crew initially contacted McCarran flight towers Monday because a pilot was concerned that a bird may have gotten caught in the engine, according to an airport spokeswoman. The aircraft landed with no problems and no evidence of a bird strike.

Instead, the evidence pointed to a swarm of insects.

The plane’s crew later told Allegiant that bees covered the windshield and that they were sucked into the engine shortly after takeoff, according to an airline spokeswoman. The plane turned back around for Las Vegas and transferred the 161 passengers to another aircraft. It made them just more than an hour-and-a-half late getting to Duluth.

Some passengers told the Associated Press the plane smelled like a fire just before it went back to McCarran.

Maintenance workers check out the plane but found no damages. No one was hurt.