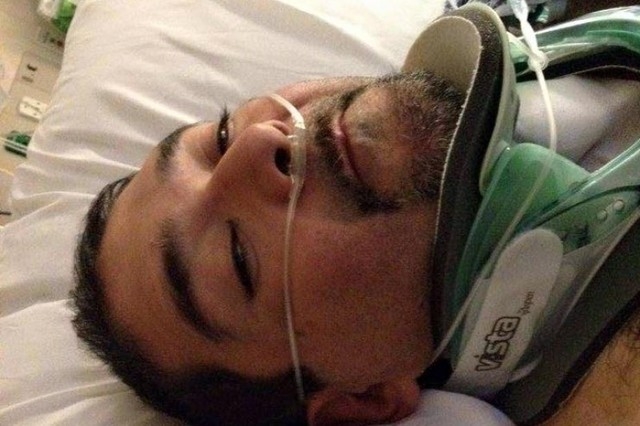 Andrew Diaz, 50, of Las Vegas, recovers in the hospital after being struck on his bicycle by a drunk driver Monday morning. He is paralyzed from the waist down, according to his daughter, 32-year-old Sabrina Diaz. (Courtesy)

A Las Vegas bicyclist struck and left in the road by a driver police said was drunk is now paralyzed from the waist down, according to his family.

Andrew Diaz was on his way to work about 5:40 a.m. Feb. 9 when he was struck by a 1996 Honda Civic. He was headed north on Boulder Highway, near the intersection of Lamb Boulevard. The driver never stopped, police said.

A short while later, Las Vegas police arrested 40-year-old Braulio Encizo-Benitez after getting tips from witnesses. He failed field sobriety tests and was arrested on charges of DUI and hit-and-run, according to a police report.

Diaz — who was not at fault, according to police — went to the hospital.

The 50-year-old wasn’t able to talk for an interview, but his daughter served as a spokeswoman.

Sabrina Diaz, 32, told the Review-Journal her dad was recovering from two major surgeries at Sunrise Hospital and Medical Center’s Intensive Care Unit, where he was transported after the crash, when he had to endure emergency surgeries Feb. 19 and Feb. 22.

Her father didn’t have insurance and probably will be moved to a state-funded nursing home to rehabilitate, she said.

The paralysis may not be permanent, the daughter said. Doctors have given him a 50 percent chance of walking again. The crash left him with a broken neck, back and a shattered leg.

Sabrina Diaz has been to visit her father in Las Vegas, but they mostly have to communicate long distance. It’s “killing” her, she said, that they can speak to each other only when a nurse holds a phone to his ear.

Andrew Diaz moved to Las Vegas in 2008 when he was unable to find work in his hometown of Chicago, Sabrina Diaz said. After working for temp agencies, he found work as a machine operator with a North Las Vegas manufacturing company in January.

A bicycle was his only means of transportation, the daughter said, and he rode it 6 miles each way to work every day.

“I am his only child and am completely devastated that the driver took off without even checking on my dad after hitting him,” Sabrina Diaz said in an email.

She said she has begged her dad to move back to Chicago with her in part because she has heard about several hit-and-run crashes in Las Vegas.

Fatal auto-pedestrian crashes are on the rise in the valley, nearly doubling from 2009 to 2013. According to the Department of Transportation, 36 pedestrians were killed on valley roadways in 2009, and 70 were killed in 2013.

But Andrew Diaz had a job offer he couldn’t refuse, his daughter said.

The day of the crash, a woman told police she drove up behind Encizo-Benitez, who was “slumped over the wheel” of his teal Civic on Lamb. It was stopped in a left turn lane to head south on Boulder Highway. She woke him by getting out of her car and approaching his.

Encizo-Benitez waved at her, a police report said, then drove onto Boulder Highway. She tried to follow but lost him where Boulder Highway meets Indios Avenue, according to the report.

Making a U-turn on Boulder Highway, the woman saw people gathered around Andrew Diaz on the ground. When she learned he had been struck, she described Encizo-Benitez’s vehicle for police.

An online fundraising site with a goal of $500,000 has been set up for Andrew Diaz: gofundme.com/AndrewDiazFund.