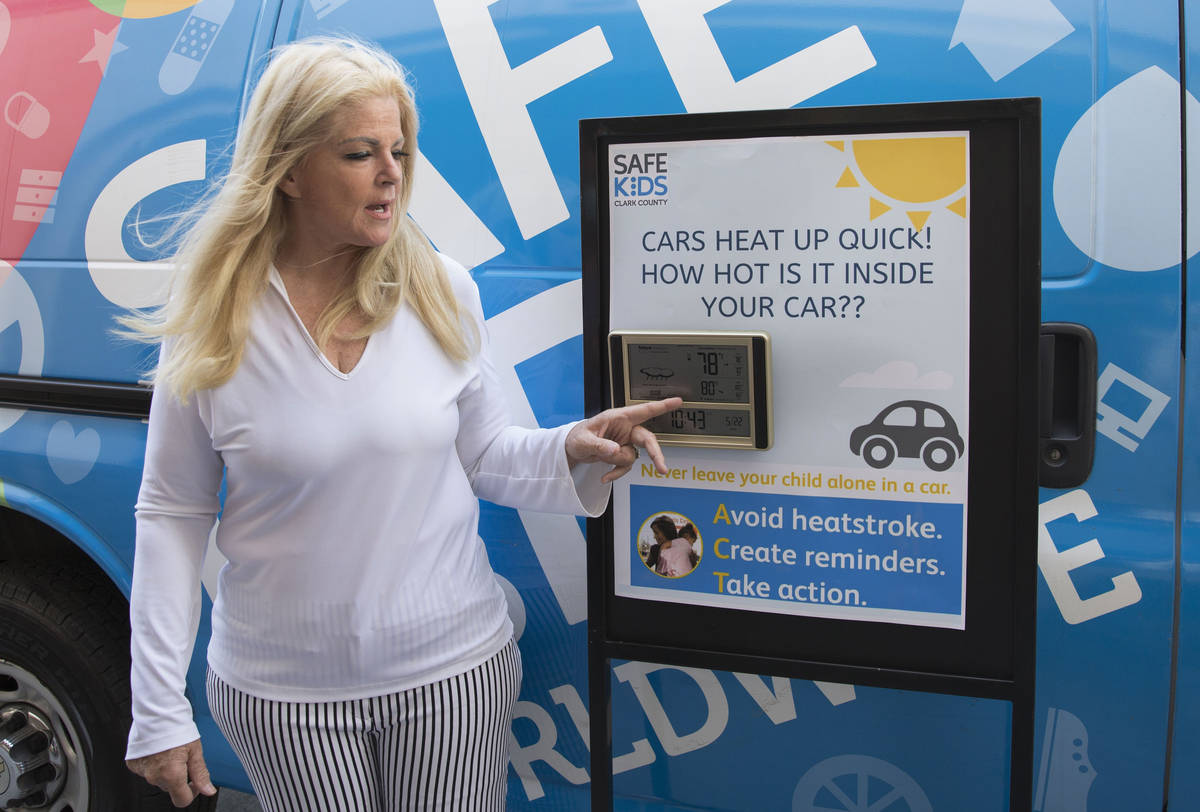 Jeanne Marsala, a registered nurse and director of the Safe Kids Clark County program, speaks during a news conference on Friday, May 22, 2020, in Las Vegas about the dangers of leaving children in hot vehicles. (Bizuayehu Tesfaye/Las Vegas Review-Journal) @bizutesfaye 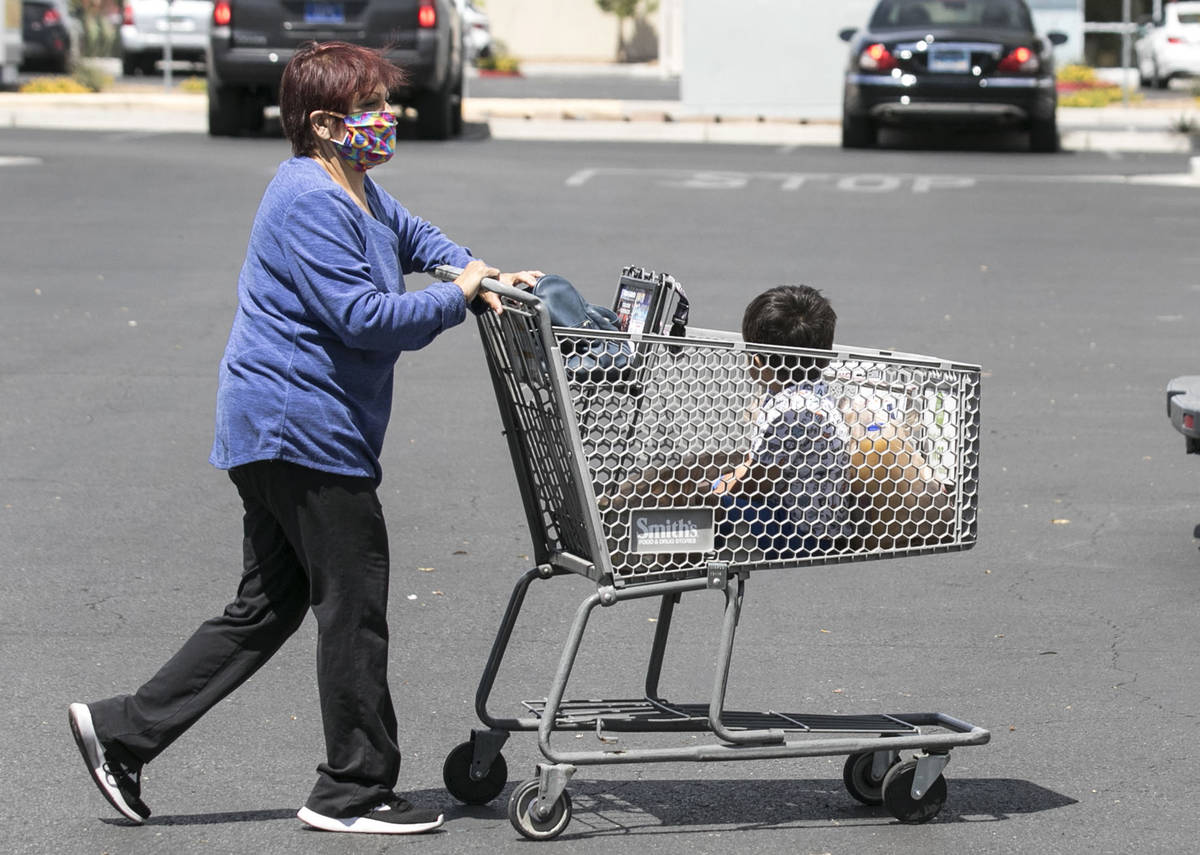 Lisha Valles, pushes her grandson, Phoenix Trejo, 3, in a grocery cart after shopping on Friday, May 21, 2020, in Las Vegas. Valles always takes her grandson with her when she goes shopping. (Bizuayehu Tesfaye/Las Vegas Review-Journal) @bizutesfaye 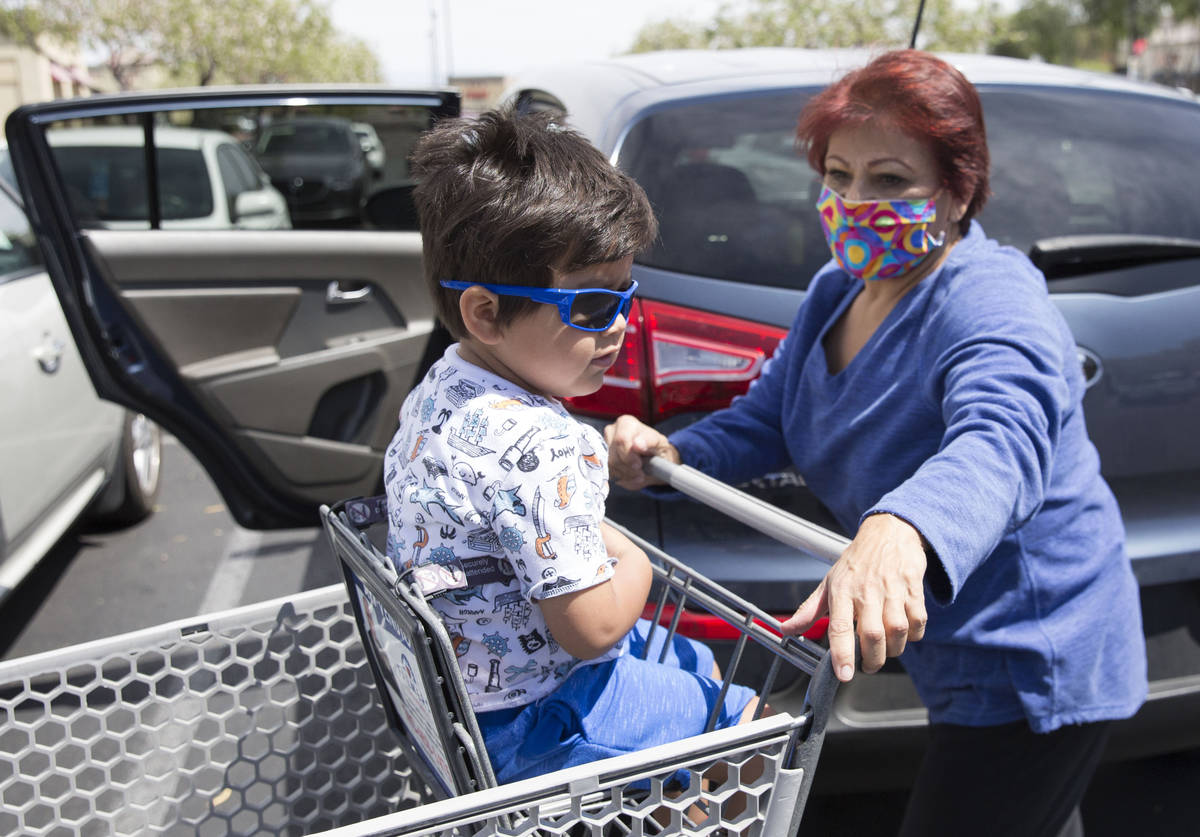 Lisha Valles, pushes her grandson, Phoenix Trejo, 3, in a grocery cart after shopping on Friday, May 21, 2020, in Las Vegas. Valles always takes her grandson with her when she goes shopping. (Bizuayehu Tesfaye/Las Vegas Review-Journal) @bizutesfaye

Although summer hasn’t officially started, emergency management services in Clark County already have received 102 reports of children being locked in cars — and Jeanne Marsala wants the public to know that can be a deadly mistake.

“When the temperature outside is 100 degrees, it can reach 140 degrees in the vehicle within about 15 to 20 minutes,” said Marsala, director of the Safe Kids Clark County program. “That is not compatible with a child’s life.”

On Friday, Marsala accompanied a large van painted with the Safe Kids logo outside a Smith’s grocery store in southwest Las Vegas. The van will be left there through Memorial Day weekend, with a display showing the temperature outside and inside the car, as a reminder to parents as the weather warms up.

Marsala said that with drastically fewer cars on the road during the COVID-19 pandemic, she is not seeing as much of a decrease as she would expect of calls regarding children being left in cars.

“We are finding that a lot of parents amid COVID are leaving kids in the cars to run into the store because they don’t want to have the kids be around any people,” she said. “That’s super dangerous.”

From March to May 17, emergency management services in Clark County recorded 102 reports of children left unattended in cars, but no children had to be hospitalized. From March 2019 through all of May 2019, the county said, it received 197 reports.

Marsala said hot temperatures quickly turn deadly for children, and the younger the child, the faster that child can die in the heat. The temperature in a hot car can increase up to 5 degrees a minute, and at 104 degrees a child can suffer a seizure.

At 107 degrees, the conditions in the car can turn fatal, Marsala said.

The National Weather Service said temperatures this weekend won’t surpass 100, but that will change next week. Saturday has a predicted high of 84, followed by 88 on Sunday and 93 on Monday.

Across the U.S., four children have died this year after being left in a car, Marsala said. In the past 25 years, Nevada has seen 25 children die under those circumstances.

Marsala said it has been a few years since the last fatality in Nevada. In July 2017, 3-year-old Chase Lee of Filmore, Utah, died after he was left in a parked car in Las Vegas for at least an hour. The high that day was 114.

In Nevada, it’s illegal to leave a child under 7 in a car that is turned off, and it can result in a misdemeanor. An injured child can result in a felony child abuse or neglect charge, Marsala said.

Marsala said children often are left in cars by accident. New parents who are sleep-deprived or experiencing a change in their routine sometimes forget babies in back seats while rushing to work or the grocery store.

Clark County Commissioner Michael Naft also spoke on Friday and urged parents to be mindful as everyone’s lives are uprooted during the coronavirus crisis.

“This reminder is critically important, that people take the time, think about what they’re doing, as their normal routine is not quite the same, Naft said.

As a new father of a 3-month-old girl, Naft said the issue hit close to home.

“For all the children among us, make sure that you are thinking extra cautiously,” he said.