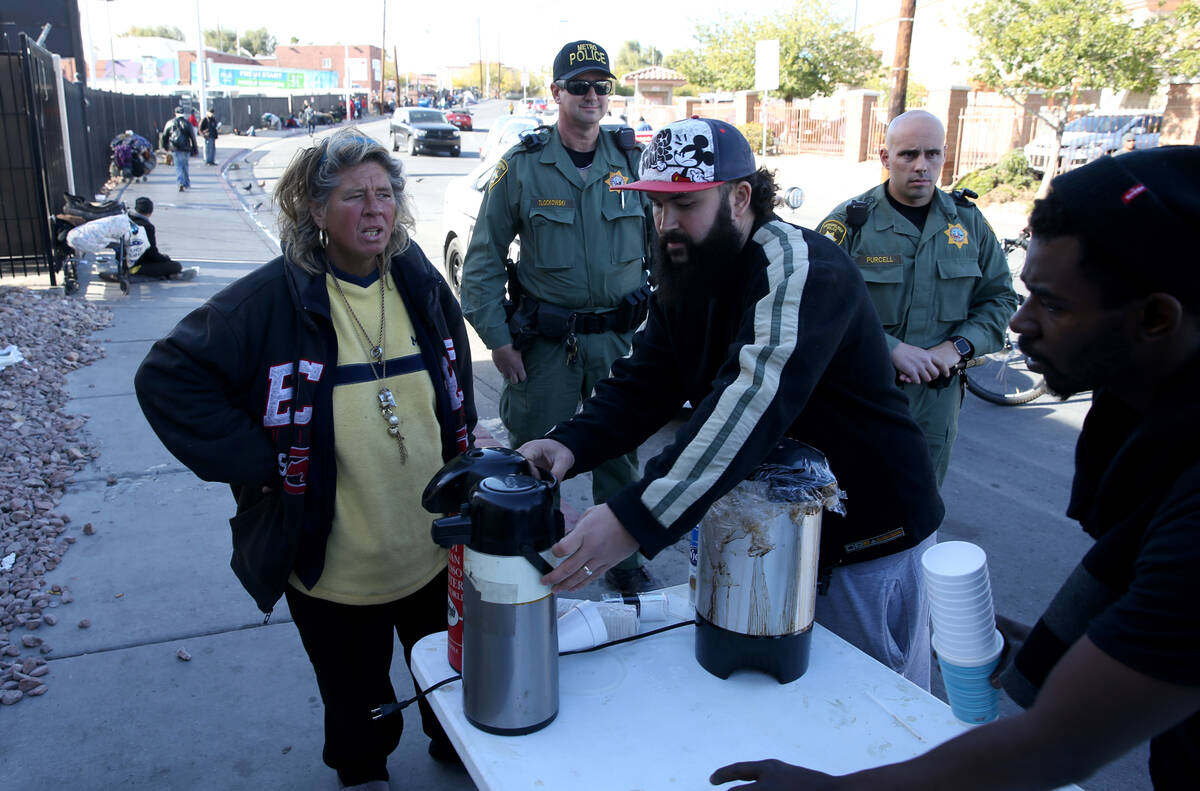 Las Vegas police watch as Joey Lankowski, center, cleans up the area where he was distributing food on Foremaster Lane near Las Vegas Boulevard Wednesday, Nov. 28, 2018. Lankowski was cited for parking in a red zone. (K.M. Cannon/Las Vegas Review-Journal) @KMCannonPhoto 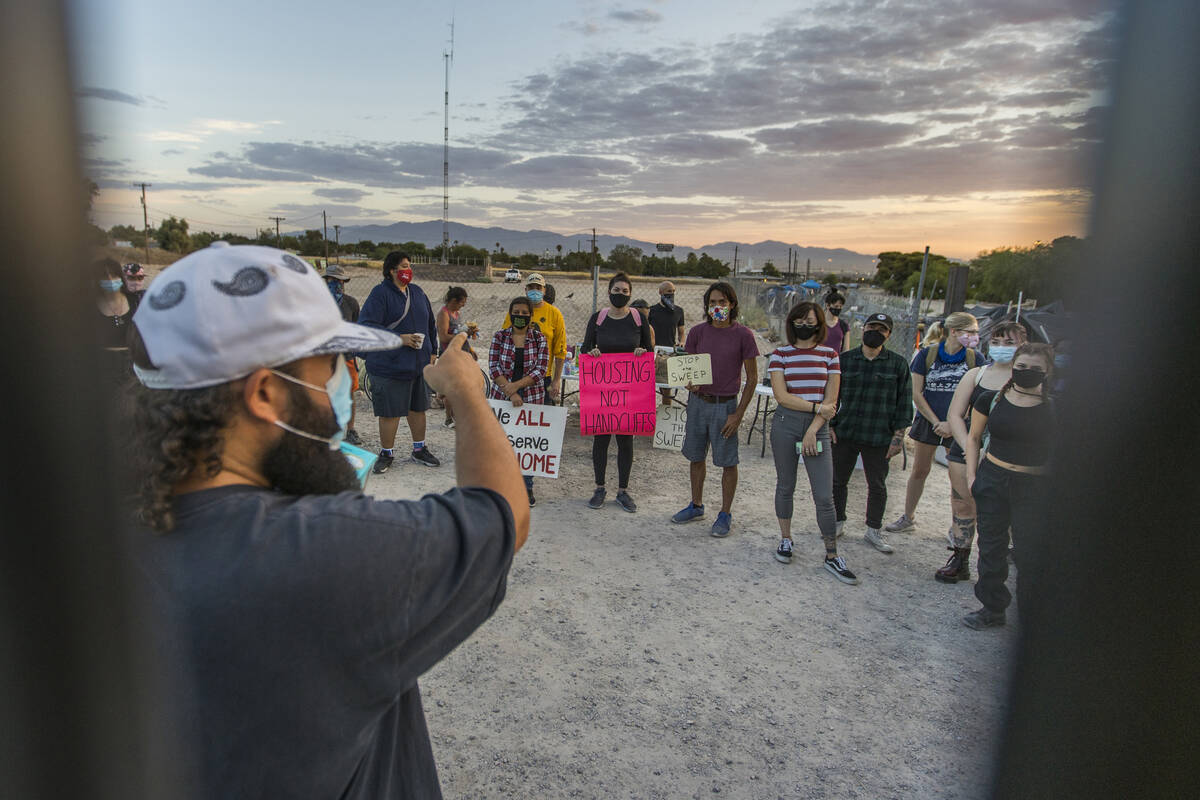 Joe Lankowski organizes members of Food Not Bombs, the Sidewalk Project and other supporters gathered early to block a possible police raid, protect the 10 huts for the homeless and to pick up trash about an encampment adjacent to the I-15 north of West Owens Avenue on Saturday, August 15, 2020, in Las Vegas. (L.E. Baskow/Las Vegas Review-Journal) @Left_Eye_Images 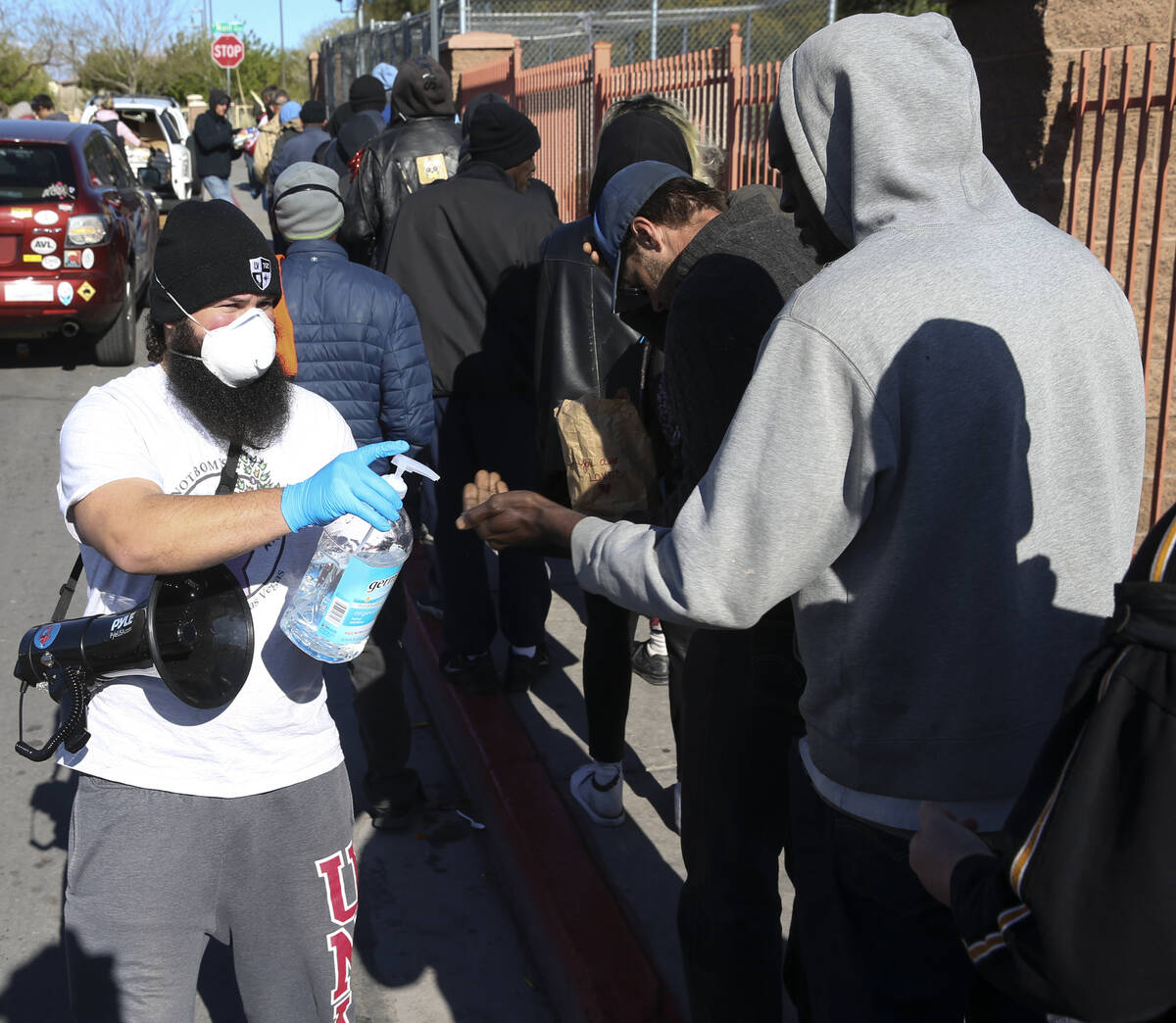 A Las Vegas donation-based organization announced last week that it would be dissolving because one of its leaders had siphoned thousands of dollars from the group.

New Leaf Community, known for building small shelters for unhoused people with help from volunteers, released a statement online that its co-founder Joseph Lankowski “misappropriated New Leaf funds” totaling more than “$36,000 over the course of the past 10 months.”

The statement followed a previous post shared Sept. 8 on social media stating: “Due to undignified actions by New Leaf founders, including the misappropriation of funds, the collective has decided to dissolve and this project will not be moving forward.” It proceeded to state that New Leaf would “follow up with further information promptly.”

New Leaf did not respond to multiple requests for comment.

In a text message Wednesday, Lankowski said he acted alone and that he was sorry for betraying people’s trust.

“Words can’t describe how much I regret taking funds that were so generously shared by such caring and hard working members of our community. These donations were made because they believed in the work that we were doing as a collective,” he wrote. “I pray that my betrayal of these individuals’ goodwill will not dissuade people from continuing to help our city’s most vulnerable members in the future.”

New Leaf’s statement said most members learned of the missing funds in August through co-founder Robert Majors, who said Lankowski had used $32,000 at various casinos during relapses with addiction. Majors claimed to have challenged Lankowski last year, when the “initial unfaithful withdrawal” was first noticed, according to the statement.

“Robert gave Joey the opportunity to come clean about the money to the group and told him to come up with a plan to return the missing funds. Robert gave Joey a week to do so, and initially, Joey agreed to figure out a plan and tell the group. However, he never did, and Robert did not hold him accountable, leading to further charges,” according to the statement.

Majors did not respond to multiple requests for comment.

It is unclear if New Leaf will seek criminal charges.

Lankowski stated that he’ll work to repay the stolen money, and that he is in treatment for a substance abuse disorder and other addictions.

“I hope that some day people can forgive me for all of the hurt and pain that I have caused so many, but I understand that for some that day may never come,” Lankowski wrote. “Regardless, I do hope to make the fullest amends possible with all that I have harmed and will now be dedicating myself to this accountability process.”

New Leaf began operating in July 2020, and focused on building Conestoga huts, a hard-shelled, insulated tent structure less than 100 square feet. Volunteers said each hut took several hours to build and cost about $600 each, according to a July 2021 report from KTNV-TV, Channel 13.

New Leaf is not registered as a 501(c)(3) nonprofit, a tax designation from the IRS that in part requires a group to annually report its financial statements.

Instead, the group described itself as a “small community mutual aid organization.” Consumers could donate online including through Patreon, a platform that allows organizations or individuals to run a subscription service.

New Leaf said its volunteers intend to gain access to the organization’s financial records and release the statements “in the next two weeks.”

It said volunteers are still determining what to do with its remaining funding, and are discussing a “proper accountability process to rectify the wrong of money being taken from community funds.”

New Leaf said it canceled recurring donations through Patreon, PayPal and its website. But it noted that it does not have access to the accounts associated with Food Not Bombs Las Vegas, another donation-based organization with which Lankowski was involved.

As of Wednesday, the website’s donation link through PayPal appeared to still be active and linked to an account in Lankowski’s name.

New Leaf garnered attention this summer when officials from the city of North Las Vegas tore down huts it built on the group’s property.

Lankowksi currently has liens against him for two abatements performed on property he purchased on behalf of New Leaf. Property records show he purchased a vacant lot, zoned for single-family residential use, at Revere Street and Plymouth Avenue, for $14,000 in November 2021.

Lankowski did not reply to questions clarifying whether the property was purchased entirely with donor funds.

Prior to taking down the huts, code enforcement officers had warned Lankowski that the group could not build the units. A city official said the officers were also concerned with the lack of plumbing, electricity and access for emergency vehicles and had deemed it “uninhabitable.”

City officials said they provided services and access to shelter for the people who were living on the lot.

“The health and safety of the residents experiencing homelessness was our top priority, as was protecting the interests of good-hearted people who falsely believed they were supporting a worthy cause. We will continue to work with community and state partners to find real solutions for homelessness in Nevada,” Deputy Chief of Staff Delen Goldberg said in a statement.

New Leaf said in its statement online that the co-founders want to dispute the liens so the property is not repossessed. If successful, volunteers have proposed selling the land and donating the money to its community partners.