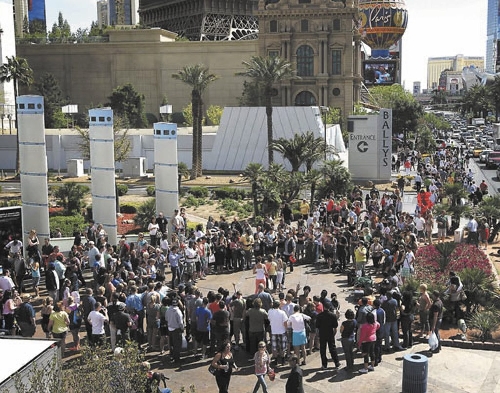 A woman swallows a 3-foot-long sword as part of a street magic show.

Vendors hawk food and water as performers attract crowds of watchers on the sidewalks, forcing other pedestrians to step into the street.

These examples of potential safety issues degrading the Strip’s brand were presented to the Clark County Commission on Tuesday. They sparked a discussion about recommendations from a panel that studied ways to improve the tourist experience that is the county’s economic lifeblood.

As part of that discussion, commissioners approved a $581,000, three-month study to identify areas where pedestrian movement is congested on the world-famous four-mile stretch of real estate between Russell Road and Sahara Avenue.

Funding for the study comes from room tax proceeds restricted for transportation improvements in the resort corridor.

The Resort Corridor Workgroup, established last year by commissioners and assembled by County Manager Don Burnette, met over several months to hammer out details of proposed Strip improvements that include a stronger police presence and a surveillance system. The group is composed of gaming industry and tourist executives and law enforcement representatives.

County staff will bring proposed code amendments to commissioners, who will identify funding sources to make some of the recommended changes, including regulating commercial activity on sidewalks.

Virginia Valentine, president of the Nevada Resort Association, said the goal is to make the Strip a better experience for visitors, remain competitive with other states in the industry and promote a healthy economy statewide.

She pointed to letters from tourists threatening to boycott Las Vegas because of "a horrible experience."

Police suggest installing a closed-circuit television system to deter crime and direct medical attention when necessary. Resort properties would pool their funds to pay for extra police and other resources, as they did last summer during a rash of stabbings on the Strip.

Other recommendations include a night court to handle certain offenses, forcing handbillers to clean up their messes and clearing illegal vendors from the public right of way.

Dane Claussen, executive director of the American Civil Liberties Union of Nevada, took issue with some of the recommendations, threatening litigation for any ordinances or parts of ordinances that "attack First Amendment rights on the street."

Commissioner Lawrence Weekly characterized some of the issues as "the nightmare of Las Vegas Boulevard" and said the Strip "is getting way out of control." He pointed to "smut peddlers," people who hand out cards of naked women.

"We spend millions of taxpayer dollars marketing the beautiful Las Vegas Strip," Weekly said. "There are a lot of things that happen on that Strip that are totally unnecessary. … It’s ridiculous to have a child on the streets, and someone is putting this type of information in a child’s hands."

Burnette cautioned that adult-oriented businesses would not be singled out.

County management denied press access to the study group’s meetings, saying participants would not be as open in their comments if they were included in media coverage of the proposed Strip improvements.

Because commissioners delegated the study group responsibility to Burnette, that took the discussion away from a public forum setting to behind closed doors.

The meetings were compared to other meetings involving county management on a daily basis that are not subject to public attendance, including ones with lobbyists regarding other issues.

Commissioner Chris Giunchigliani said she felt "uncomfortable" when she had to ask to attend a meeting to discuss issues with the group.

"It was kind of awkward," Giunchigliani said. "Now we move to the public process."

Claussen expressed frustration that the ACLU was only asked to participate once in the dozen or so study group meetings that were held from September 2011 to March 2012 to develop the recommendations.

"We are private citizens who represent ourselves and our companies," Russell told commissioners.

"There’s nothing the matter with that and people getting together who have, more or less, similar takes on an issue and want to try to present what we believe to be legal solutions to those problems."