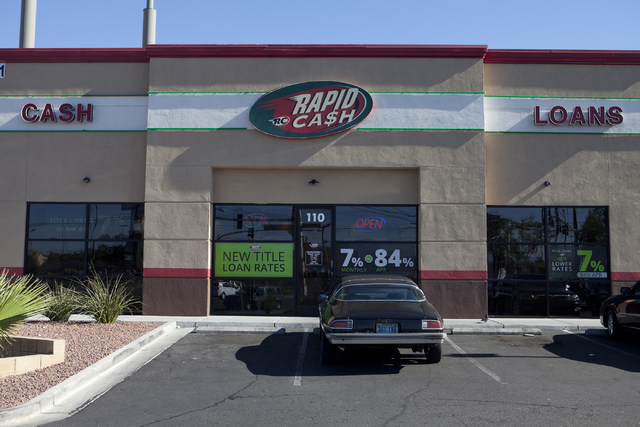 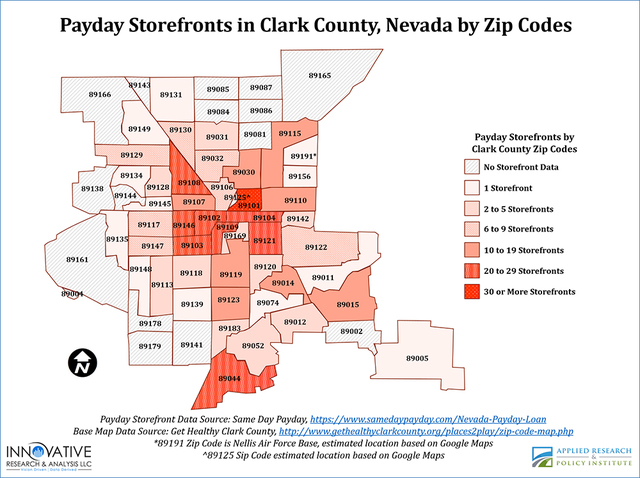 It’s been speculated that payday loan stores have a specific business target: low-income, minority neighborhoods and other at-risk groups.

The cycle of debt often created by payday loans for those who already struggle financially has been a concern, but until now, no one has mapped out what that looks like in Clark County. Justin Gardner, founder and CEO of Las Vegas-based Innovative Research and Analysis LLC, decided to take a closer look.

“Payday lenders surround most of the east valley and Paradise area,” said Gardner, a doctorate degree candidate at UNLV’s School of Public Policy and Leadership. “While there are some on the outskirts of those areas, the majority of them are in the thoroughfare connection areas where there is a higher income of traffic.”

Based on his research and using the website samedaypayday.com/Nevada-Payday-Loan, Gardner found that the majority of payday loan shops tend to match up with areas that have higher percentages of low-income residents.

89101 has most of county’s payday loan stores

“Like any business, payday lenders want to be located close to their clientele and potential customers,” said Dr. Stephen Miller, director of the Center for Business and Economic Research at UNLV. “They know that people who use these loans probably can’t qualify for any other types of loans because they don’t have much savings, so they go to those neighborhoods where this market niche is needed.”

“If we look at the data, we see that there are 10 ZIP codes out of 47 that have more than half of all the (Las Vegas Valley) storefronts,” he said.

Based on his research, there are 375 payday loan storefronts in Las Vegas, 47 in Henderson, 19 in North Las Vegas, one in Boulder City and one on Nellis Air Force Base.

Most military members getting loans make between $30K and $50K

There are an additional 14 clustered around the 89156 and 89115 ZIP codes near Nellis AFB, which is why Gardner has also been closely monitoring how payday loans affect veterans and active military members.

“The most at-risk group of military members fall into the E-4 and E-9 rank,” Gardner said. “They’re a little more into their careers and are newly married or starting a family or have children.”

Additionally, Gardner found that 79.3 percent of veterans using payday loans in Nevada were from Clark County, and more than half accessed payday lending since leaving active duty. Half also walked to the storefront of a payday loan store, meaning that they lacked the means for transportation.

In the 1990s, the U.S. military began noticing a problem. Many military members were having an issue with their security clearances. The military found that a large number were due to financial defaults, Gardner said.

As a result, the Military Lending Act was created in 2007. It caps the maximum interest rate for payday loans for military members at 36 percent. The 2007 version of the act was in response to a U.S. Department of Defense report that found an estimated 17 percent of military personnel used payday loans.

While this sort of legislation attacks the problem head on, Gardner said military members might get used to having a loan interest rate capped, on top of their receiving basic assistance for housing and sustenance. The problem begins when they transition to civilian life and lose those benefits.

He said that’s when many turn to payday loans.

Part of the issue is a lack of financial education, according to Kevin Schmidt, a UNLV graduate and former budget and financial analyst with Nellis AFB. While the Department of Defense provides a program known as the Transition Assistance Program, which reviews financial literacy, there comes a point when it becomes so repetitive that military members may start to tune out, Schmidt said.

“After two weeks of sitting through briefing, everything goes right through their head,” he said. “Suddenly, they fall into a situation where they don’t know what to do. They might buy a car and have a sudden expense, and now they can’t afford to pay for the car anymore, so they look for other options.

The Air Force offers a one-time-per-enlistment Falcon Loan for up to $750 with no interest.

“The main reason why so many young and enlisted members get kicked out of the Air Force is not due to bad conduct; it’s due to financial reasons,” Schmidt said. “They fall into debt so that they are susceptible to blackmail and end up losing their security clearance and can’t do their job.”

“What will the future look like if this continues?” Gardner asked. “How much will this reduce people’s access to opportunities in higher education, better jobs and moving up the socioeconomic ladder? If this continues, it will just create a ceiling, and people won’t be able to break out of debt.”

For more information on Gardner’s work, visit innov8reanalysis.com or vpliresearch.org.

This is the fifth story in a series about the payday loan industry in Las Vegas. To read other stories from the series, visit viewnews.com.