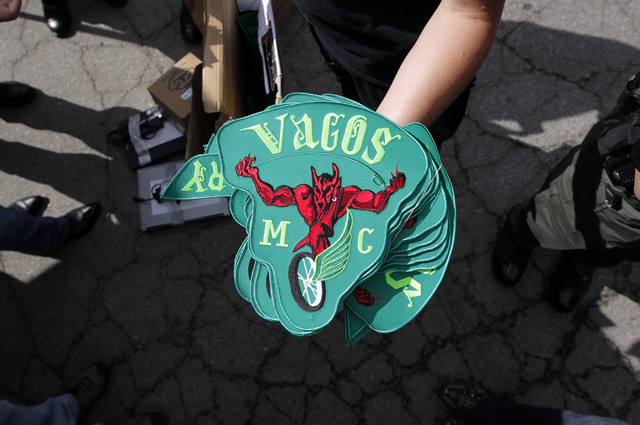 A police officer shows the Vagos motorcycle gang patches confiscated in a raid at a command post in San Bernardino, Calif., Thursday, Oct. 6, 2011. Hundreds of law enforcement officers have fanned out across Southern California and arrested at least 12 members and leaders of the Vagos motorcycle club, seizing weapons and drugs. (AP Photo/Jae C. Hong)

A federal magistrate has recommended dismissal of felony drug trafficking charges against a former officer of the Vagos motorcycle gang because of outrageous government conduct by the lead undercover agent in the case.

In a rare decision late Tuesday, U.S. Magistrate Judge Cam Ferenbach criticized Agostino Brancato, a deputized agent with the U.S. Bureau of Alcohol, Tobacco, Firearms and Explosives, for manufacturing the cocaine case against Jeremy Halgat, though Halgat had no criminal record and repeatedly told the agent in secretly recorded conversations that he did not want to traffic in drugs.

“The problem is that the government’s investigation deployed techniques that generated a wholly new crime for the sake of pressing criminal charges against Halgat,” Ferenbach wrote in his 34-page decision.

Ferenbach also said that despite Brancato’s denial, “there is no doubt” he “falsified” a report of one of the alleged drug transactions and that supervisors of his ATF-led task force “did not dissuade him” from doing it.

“This is distressing,” Ferenbach said. “Can the court rely on the chain of custody of evidence that the government will proffer against Halgat at trial? Did Brancato’s supervisors permit other falsifications?”

The government had turned over a recording to the defense of Brancato allegedly talking to a task force supervisor about lying on the report to “avoid muddying up the waters,” Ferenbach explained.

“Brancato said ‘f—- it to the formalities. They don’t need to know,’” the magistrate added.

The comments were part of a recording Brancato made to document the earlier drug transaction.

Federal prosecutors, who in lengthy court papers denied there was wrongdoing in the investigation of Halgat, declined comment on Ferenbach’s recommendation.

Natalie Collins, a spokeswoman for the Nevada U.S. Attorney’s office, said prosecutors plan to file an opposition to the recommendation with a federal judge in a bid to keep the case alive.

Brancato was the lead undercover agent in “Operation Pure Luck,” a three-year joint investigation led by the ATF into drug and illegal weapons dealing by members of motorcycle gangs, including the Vagos. Las Vegas police, North Las Vegas police and the Los Angeles County Sheriff’s Department were part of the task force.

The investigation launched in April 2010 with the secret help of a Vagos gang member, and two years later Brancato, a Los Angeles County sheriff’s deputy deputized by the ATF, became a full-fledged member of the Vagos club while working undercover.

Brancato’s status with the L.A. County Sheriff’s Department was not available late Wednesday, according to department spokeswoman Nicole Nishida.

More than two dozen motorcycle gang members were charged with drug and weapons trafficking in a series of federal and state indictments last year in the high-profile investigation.

Halgat, 36, a former Vagos sergeant at arms who goes by the nickname “Maniak,” is charged in two cases. He faces a separate drug conspiracy indictment stemming from a March 2013 sting at a Searchlight airstrip set up by undercover agents posing as Mexican drug cartel members flying cocaine to Las Vegas.

Halgat’s co-defendant in the case before Ferenbach has pleaded guilty and is waiting to be sentenced.

The magistrate’s stinging recommendation against the government was a response to court papers filed by Halgat’s defense lawyer, Melanie Hill.

“The government is not allowed to manufacture crimes solely to prosecute a citizen,” said Hill, who has filed a similar motion in Halgat’s other case, which is before a different magistrate and judge.

Hill suggested Ferenbach’s decision will impact Brancato’s credibility as a witness and may jeopardize other prosecutions stemming from the investigation in federal and state court.

In his decision, Ferenbach said Halgat “was not eager to participate in Brancato’s scheme in any capacity.” Halgat, he explained, had used cocaine and dealt drugs in the past but had “repudiated” those activities.

“His willingness to traffic in drugs only re-emerged after ATF injected itself into Halgat’s life and repeatedly solicited his services,” Ferenbach wrote.

Brancato also was unable to get Halgat to sell him illegal firearms, according to the magistrate.

Ferenbach said he was troubled that the “ATF had investigated Halgat for three years, found no contraband after executing two search warrants and indicted him for a crime designed and initiated by the ATF.”

He said he agreed with a similar federal case decision that suggested the “government engages in outrageous conduct when it engineers and directs the crime from start to finish.”

Another decision, Ferenbach said, concluded: “The function of law enforcement is the prevention of crime and the apprehension of criminals. Manifestly, that function does not include the manufacturing of crime.”