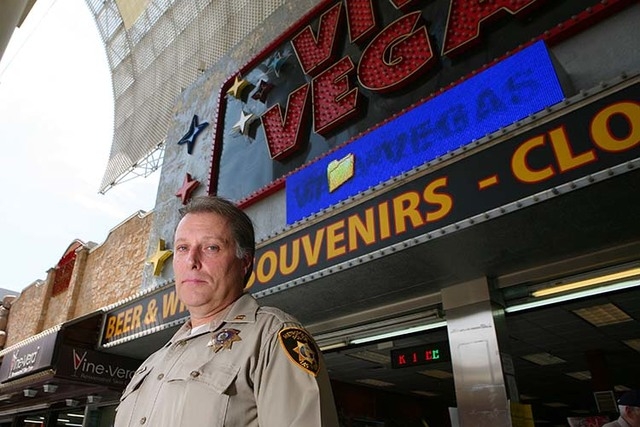 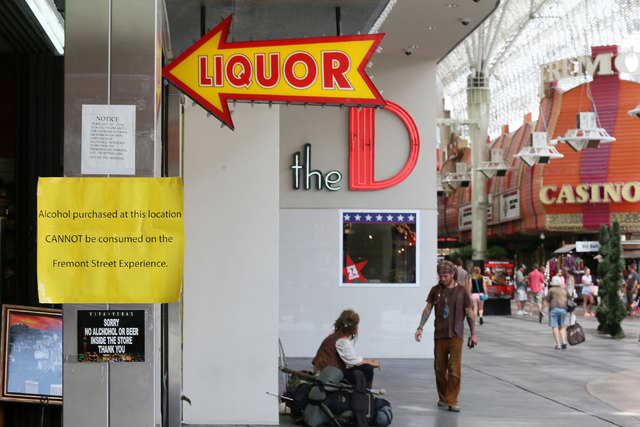 Signs are posted at the entrance to a gift shop that sells liquor at Fremont Street Experience, July 17, 2014, in Las Vegas. A series of liquor ordinances are in effect regulating alcohol carrying and consumption on the downtown popular tourist destination. (Ronda Churchill/Las Vegas Review-Journal file) 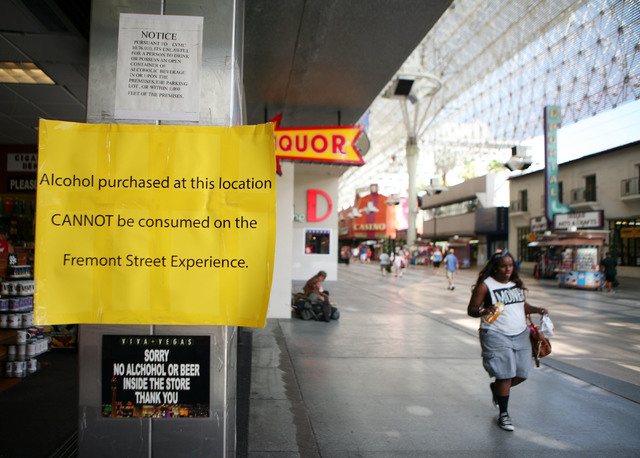 Signs are posted on the entrance to a gift shop that sells liquor at Fremont Street Experience Thursday, July 17, 2014, in Las Vegas. A series of liquor ordinances are in effect regulating alcohol carrying and consumption on the downtown popular tourist destination. (Ronda Churchill/Las Vegas Review-Journal) 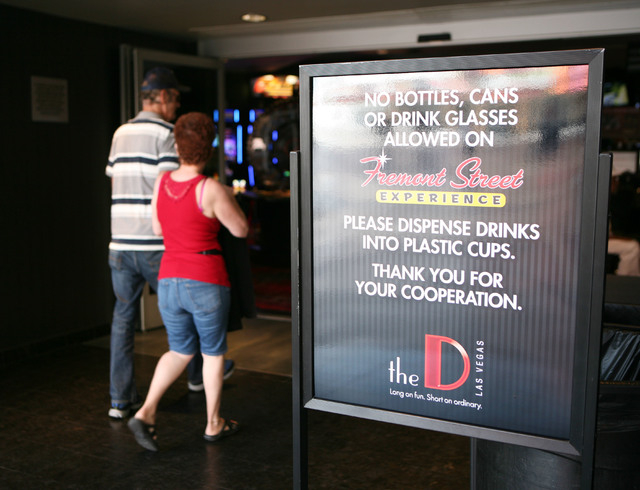 People walk past a sign posted outside the entrance to The D hotel-casino on Fremont Street Experience Thursday, July 17, 2014, in Las Vegas. A series of liquor ordinances are in effect regulating alcohol carrying and consumption on the downtown popular tourist destination. (Ronda Churchill/Las Vegas Review-Journal) 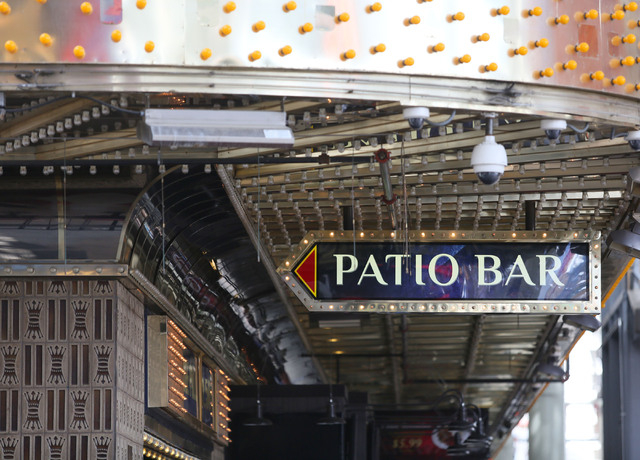 A sign advertises a patio bar at the Four Queens on Fremont Street Experience Thursday, July 17, 2014, in Las Vegas. A series of liquor ordinances are in effect regulating alcohol carrying and consumption on the downtown popular tourist destination. (Ronda Churchill/Las Vegas Review-Journal) 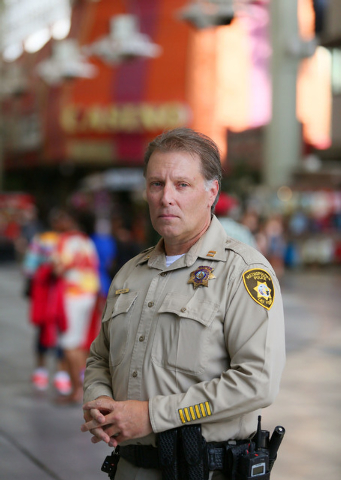 Beefing up the police presence on the Fremont Street Experience combined with sometimes confusing and legally questionable ordinances crafted by the Las Vegas City Council seems to have made a difference that can be felt. The mall feels safer today than it did six months ago.

Hotel owners see it, police believe it, even a street performer acknowledged it and a preliminary UNLV study seems to be confirming it.

“The significantly increased presence has made an absolute immediate impact,” said Derek Stevens, CEO of the D Las Vegas. He is one of the most vociferous hotel owners concerned that tourists and groups are saying they won’t return to downtown because they don’t feel safe there.

Since the police became more visible starting June 5, he said his staff has heard from hundreds of customers, either in comment cards, emails or verbally, who say downtown has changed since six months ago.

Stevens said there has been absolutely no push-back from customers concerning the ordinance banning liquor in glass and aluminum containers and requiring liquor to be in plastic or paper cups on the mall.

“It’s a nonevent,” Stevens said. “We’ve had not a single complaint.”

Signs are now prevalent at the casinos telling people to use the plastic go-cups provided if they take their drinks on the mall.

Las Vegas police Capt. Shawn Andersen, the point man for the higher visibility effort announced June 5 by Sheriff Doug Gillespie, said police are educating people about what is and is not permitted regarding liquor, rather than citing people for violations.

“We’re educating the public and warning people,” he said Thursday.

Before June 5, police responded to calls on the Fremont Street Experience, but were not there just to show they were there.

Now, there are two to six officers on the mall during the day shift, covering both the mall and Fremont Street East. The swing shift is covered by 7 to 12 officers and graveyard has just a couple, according to Andersen.

The City Council has asked for monthly reports on what’s happening as a result of the changes.

Andersen said that since June 5, there have been about 300 citations and 200 arrests, all for misdemeanors. Charges include possession of alcohol in an open container within 1,000 feet of a souvenir store where it was purchased.

Since there are six such stores on Fremont Street Experience, it’s essentially illegal to buy a six-pack, walk out the store and pop a brew.

The misdemeanor arrests have been for battery, open containers, outstanding warrants, and disorderly conduct, he said.

The city’s business license officials have also been more diligent about citing buskers who demand money for photos. If buskers accept tips, that’s permissible. If they demand payment and are aggressive about it, they can be cited for failure to have a business license and fined up to $500.

A street performer using the name “Misty Sins,” who wears a devilish, barely-there costume and covers her breasts with a large red fan, is careful not to demand money, but for a tip she will remove the fan and show her breasts covered only in pasties.

She said a dozen characters were cited last weekend. “They should give a warning the first time,” she said indignantly. “How are they supposed to pay a $500 fine?”

Performers are being asked for identification and that’s how some of the outstanding warrants are being found.

On Thursday, early in the day, there were two showgirls working for tips. When a couple came by, the man and the woman each posed with the showgirls for photos they took with their own camera. They walked away without tipping, but then the man came back and tipped.

There was signage everywhere, both in the casinos and in the souvenir stores which have borne the brunt of the City Council’s ordinances starting in May.

One ordinance required the stores put up signs telling customers they could not open packaged liquor in the store or drink it on Fremont Street Experience. The most recent ordinance requires that clerks put liquor in a sealed bag and attach a receipt to it, so that all police would need to do is see an open bag and they could stop the person and confiscate the liquor.

The receipt was at Mayor Carolyn Goodman’s insistence. While initially Andersen testified a receipt wasn’t necessary, now he believes it has merit. He said customers first see the sign in package liquor stores saying they can’t open the liquor on Fremont Street Experience, they see the clerk top it off with a sealed bag, then they see the clerk close the bag with a receipt attached. “That’s a pretty strong message,” he said.

Police are seeing fewer people carrying the high-octane liquor in oversized containers. Instead people are carrying beer in 7- or 8-ounce plastic caps. “It feels like a safer environment to me,” Andersen said. “It’s much different than even six months ago.”

Tourists and others are still able to buy oversized souvenir glasses filled with beer. The popular lady’s leg wearing a fishnet stocking goes for $35 in a bar outside the Golden Nugget. Down at Walgreen’s, you can buy the leg without the alcohol for $14. Those oversized containers remain legal because they’re plastic.

One souvenir store offered a 24-ounce Heineken for $3.99 (although under the new ordinance, they’re not supposed to sell singles in the packaged liquor stores). Over at the Golden Nugget outside bar the sign says a 24-ounce beer is $12.

Some of the souvenir shops that rely on profitable liquor sales have sued the city over ordinances that are aimed at limiting their sales, calling them un­constitutional and arguing that the new limitations deny them due process. The case is pending before U.S. District Judge Gloria Navarro, who refused to block enforcement of the new ordinances.

Since their first liquor restricting ordinance brought a lawsuit, the City Council seems to be tiptoeing when considering subsequent ordinances.

Councilman Bob Beers advocated not changing any more liquor ordinances Wednesday and seeing the results of the ones they’ve passed piecemeal.

William Sousa, director of the Center for Crime and Justice Policy at the University of Nevada, Las Vegas, has conducted a survey on the mall and said preliminary results show “general comfort levels at the Fremont Street Experience.”

He cautioned that the analysis is only of the first 50 respondents and he hopes to receive another couple of hundred. Beginning June 15, his students began asking people on the mall a series of questions, including their perception of the police presence which had barely started. In December, he will conduct another survey to compare the results.

While anecdotally, people say on social media and tell downtown executives they don’t feel safe there, the survey showed much different results. Out of the first batch of surveys, more than 90 percent said they feel safe or very safe on the Fremont Street Experience. “Nearly 90 percent would recommend Fremont Street Experience to friends or family,” Sousa summarized. “Over 80 percent said the police add to their sense of safety.”

He said the early numbers are not enough to detect a pattern and the study will analyze if there’s a difference of attitudes based on gender, age, and time of day of the survey.

Now the oddity of all this is that the ordinances apply under the canopy. You can go to the El Cortez farther down Fremont Street, buy a beer in a bottle and walk around with it on the street outside.

That’s one reason tourists and locals say they are confused about what’s legal and where.

The next challenge for the city and police is the buskers.

“We have to find the sweet spot, balancing the First Amendment and where people feel safe,” Andersen said.

Some of the sights are startling to visitors. There’s talk of the man who wears a diaper and wings and poking out of the diaper is what shall be called a large adult male device.

People tend to ask police, “Is that legal? Can they do that?”

Yes they can, police answer, citing the First Amendment.