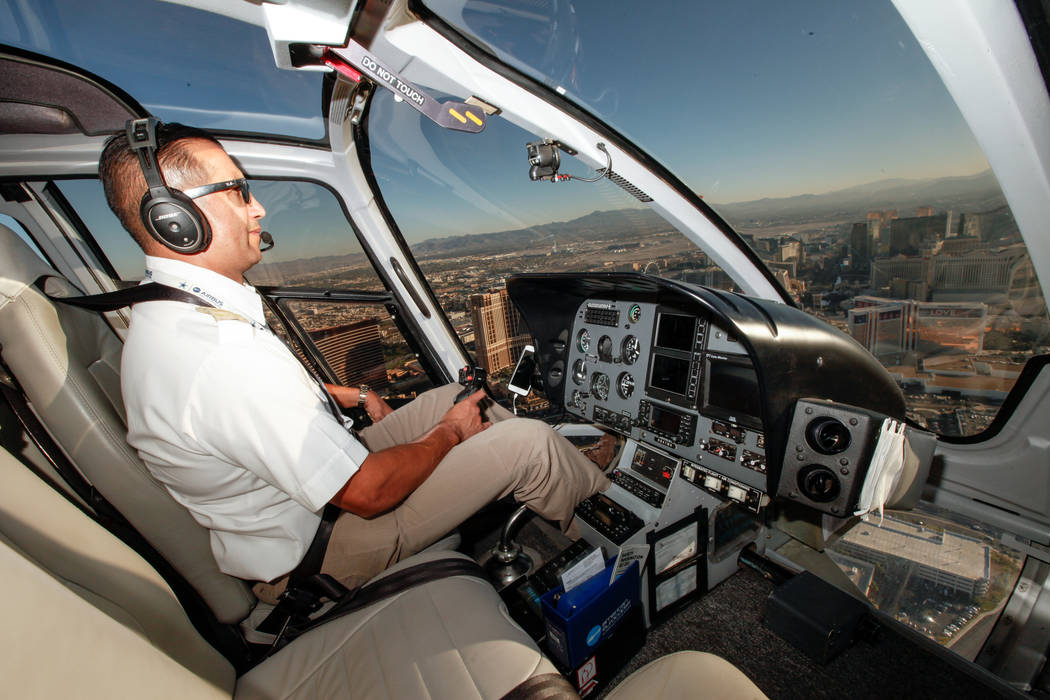 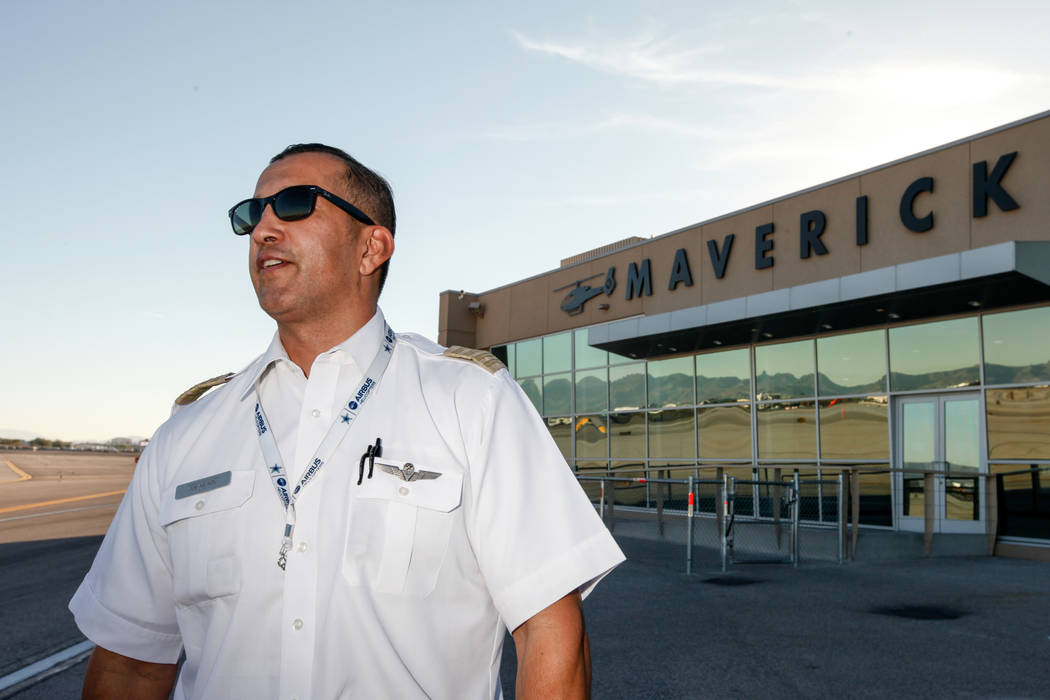 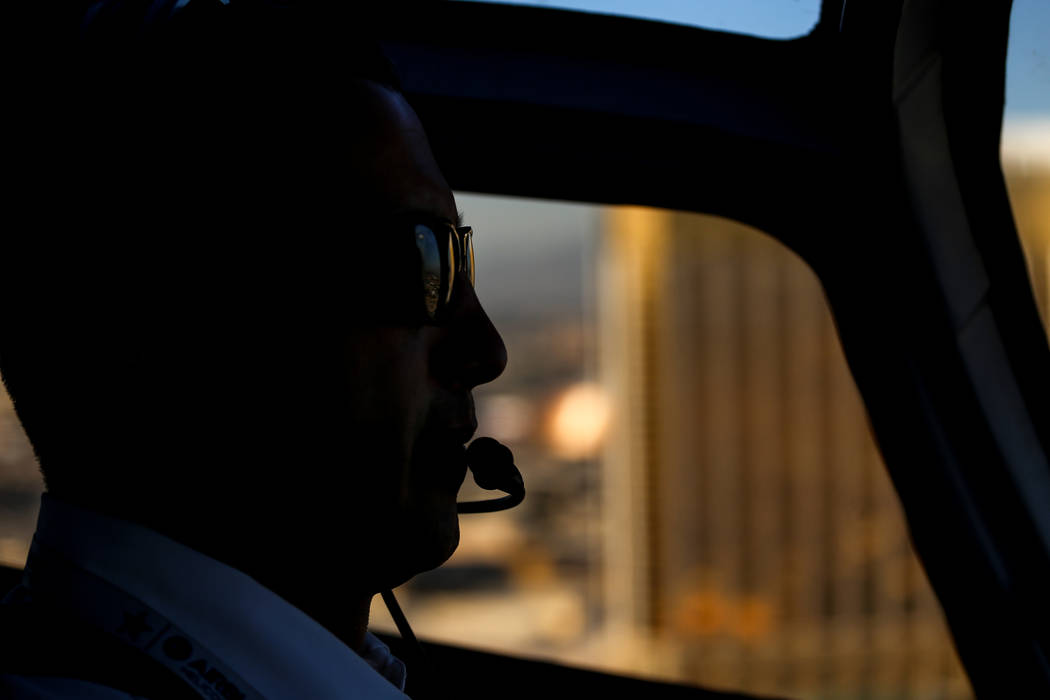 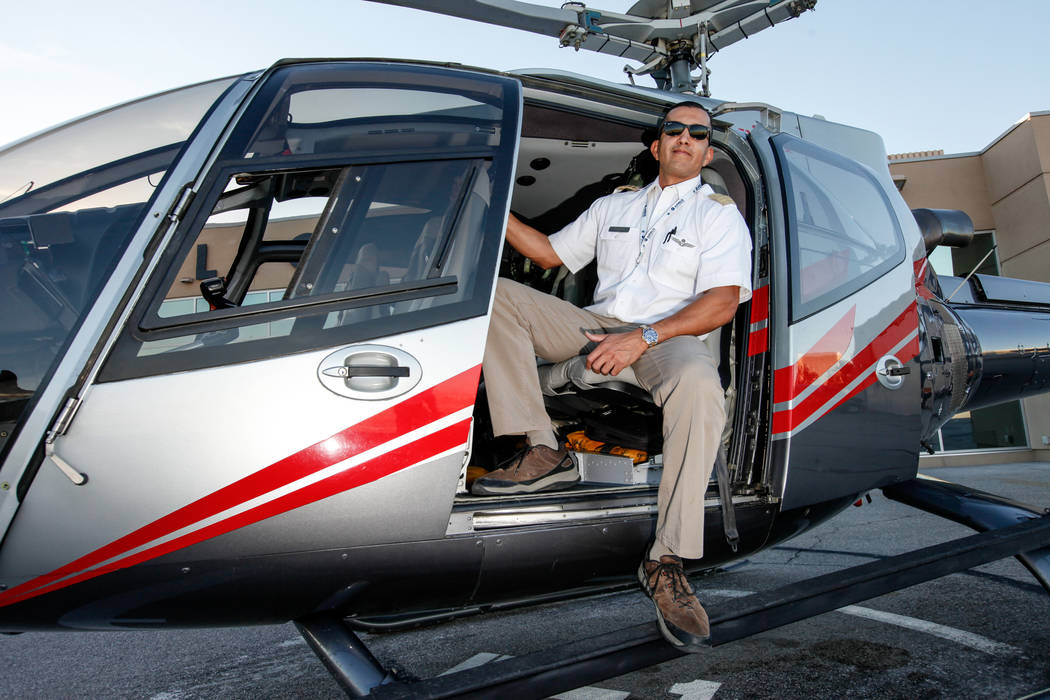 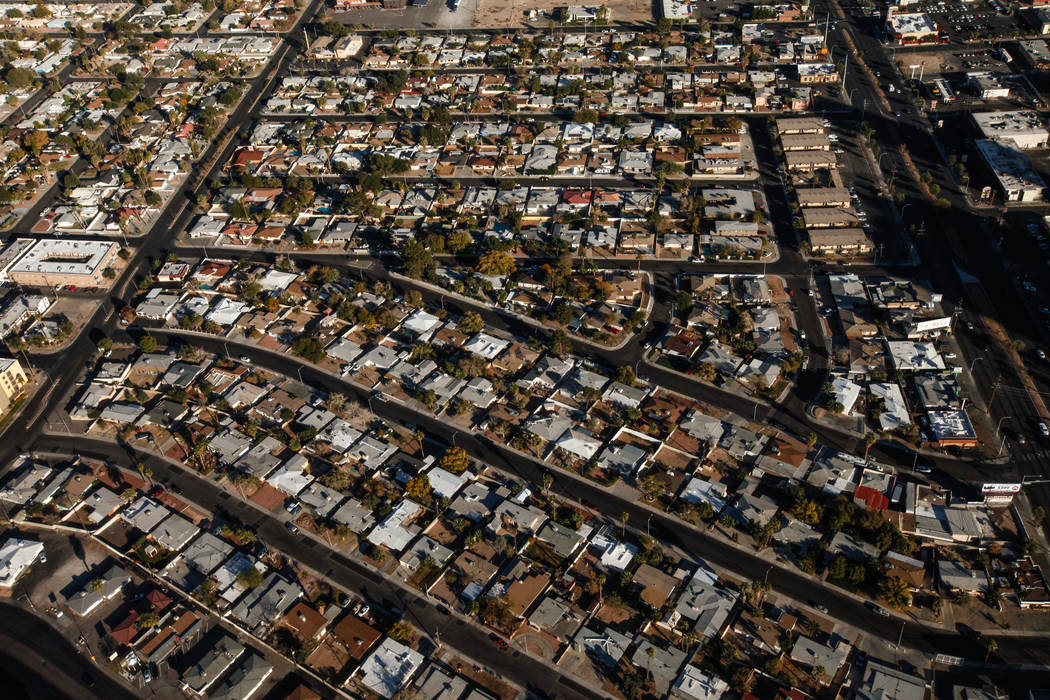 A view of residential homes as seen from inside a helicopter piloted by Joe Munoz, 41, of Maverick Helicopters, in Las Vegas, Friday, Dec. 1, 2017. Joel Angel Juarez Las Vegas Review-Journal @jajuarezphoto 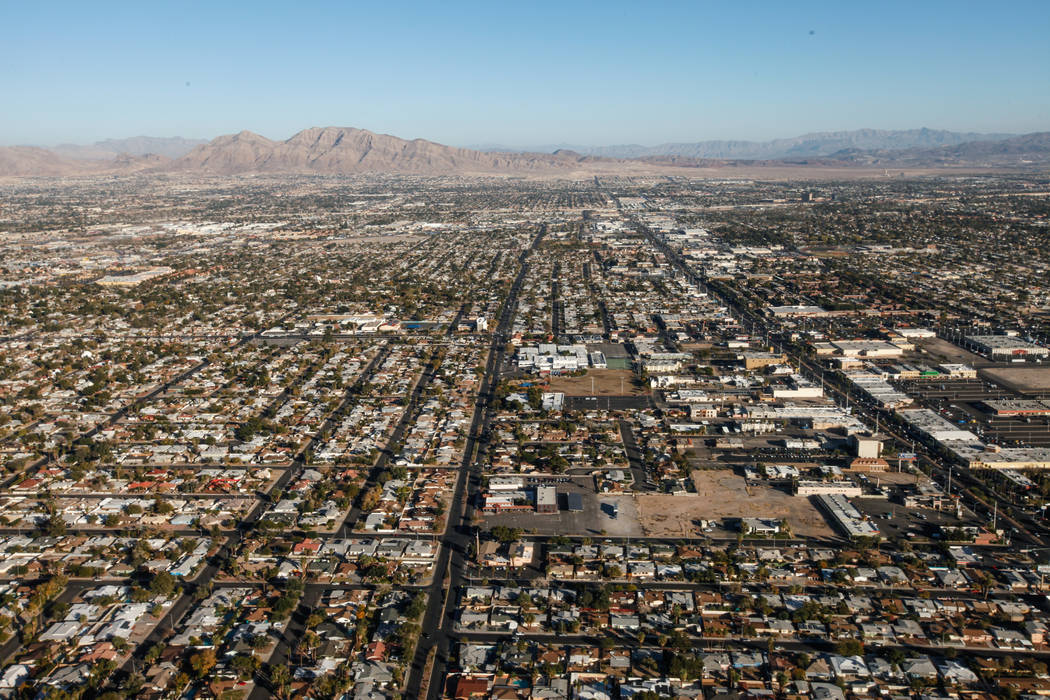 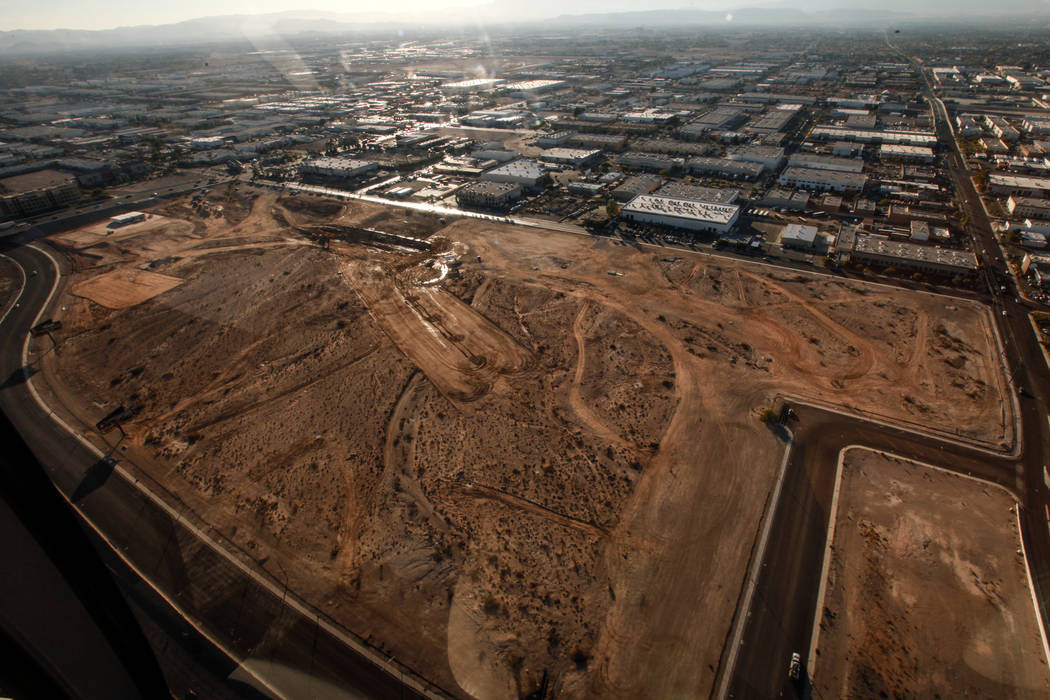 A view of the construction site of the Raiders stadium as seen from inside a helicopter piloted by Joe Munoz, 41, of Maverick Helicopters, in Las Vegas, Friday, Dec. 1, 2017. Joel Angel Juarez Las Vegas Review-Journal @jajuarezphoto 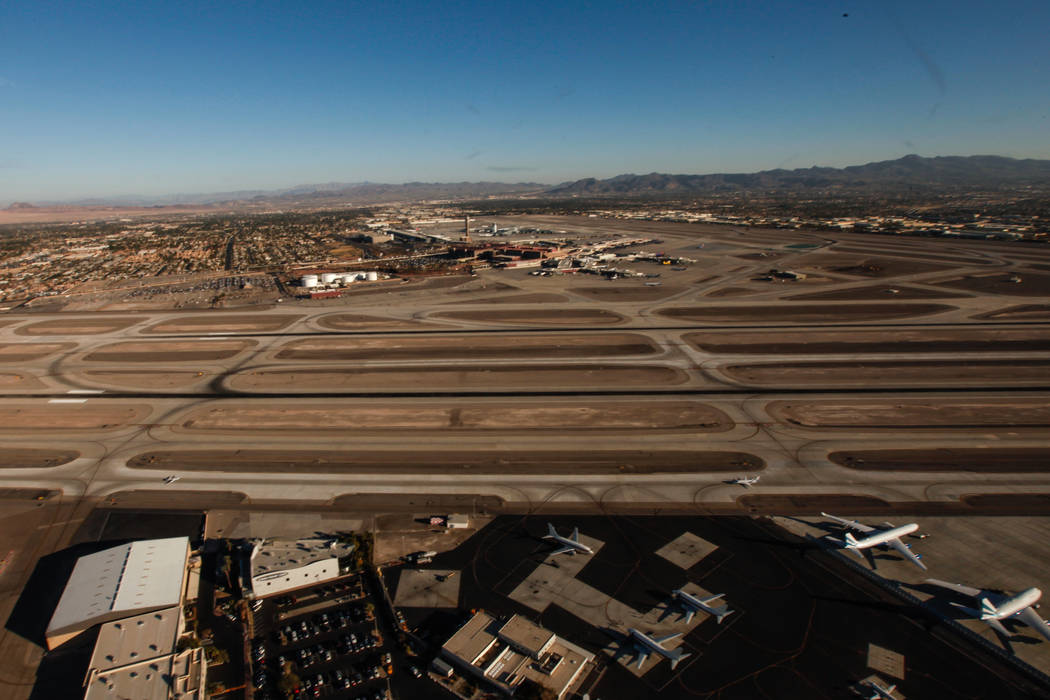 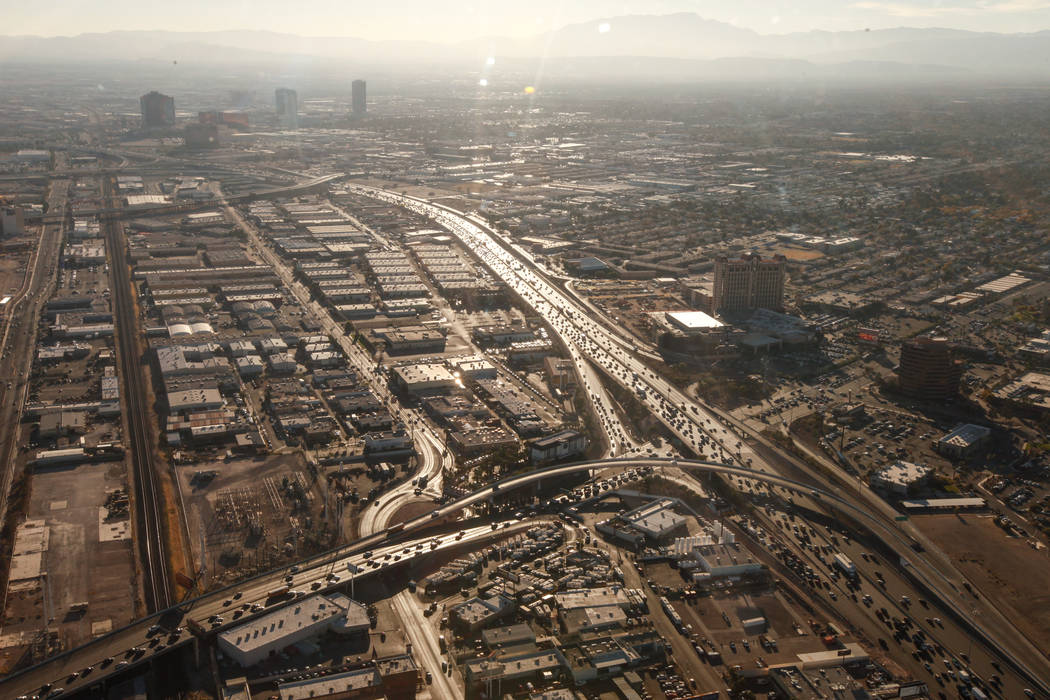 A view of traffic along Interstate 15 and State Route 589 as seen from inside a helicopter piloted by Joe Munoz, 41, of Maverick Helicopters, in Las Vegas, Friday, Dec. 1, 2017. Joel Angel Juarez Las Vegas Review-Journal @jajuarezphoto 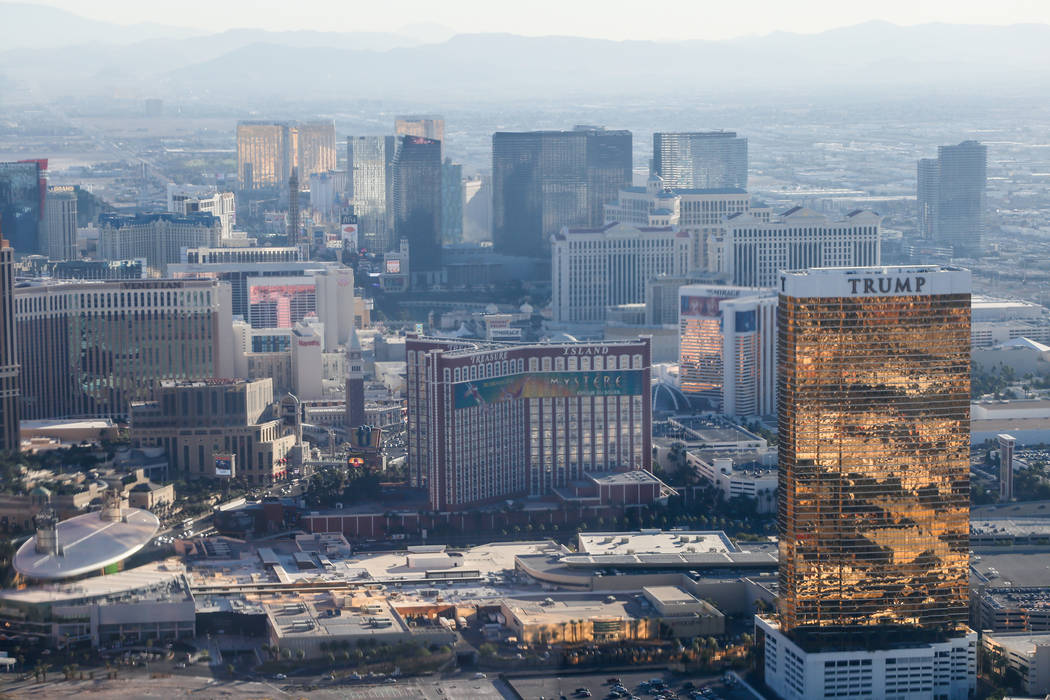 A view of the Strip as seen from inside a helicopter piloted by Joe Munoz, 41, of Maverick Helicopters, in Las Vegas, Friday, Dec. 1, 2017. Joel Angel Juarez Las Vegas Review-Journal @jajuarezphoto 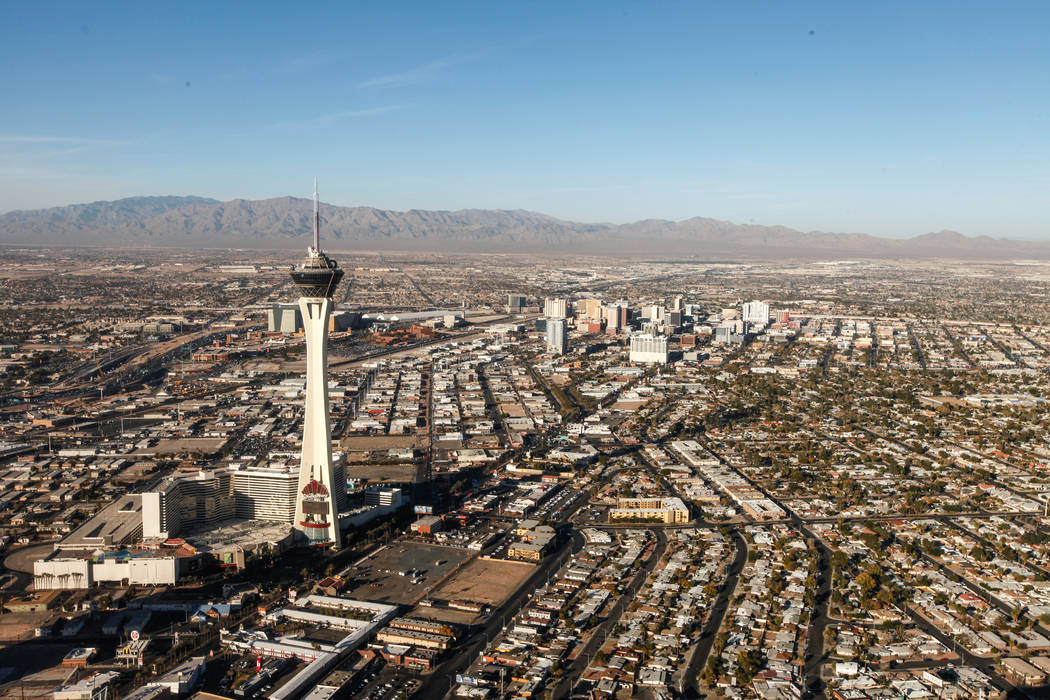 A view of the Stratosphere as seen from inside a helicopter piloted by Joe Munoz, 41, of Maverick Helicopters, in Las Vegas, Friday, Dec. 1, 2017. Joel Angel Juarez Las Vegas Review-Journal @jajuarezphoto 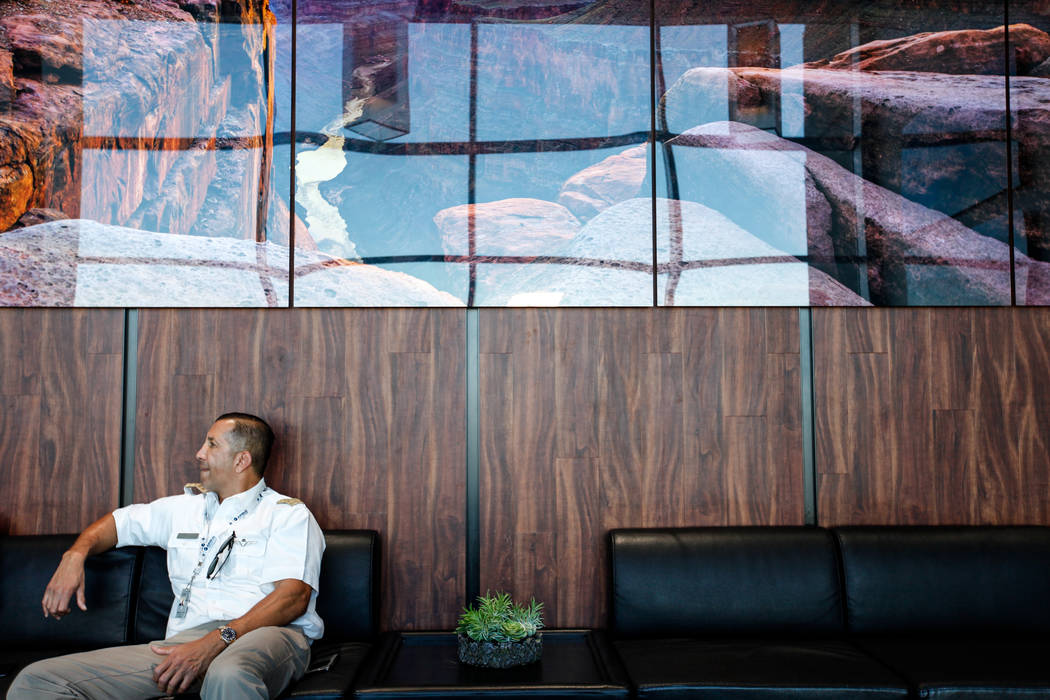 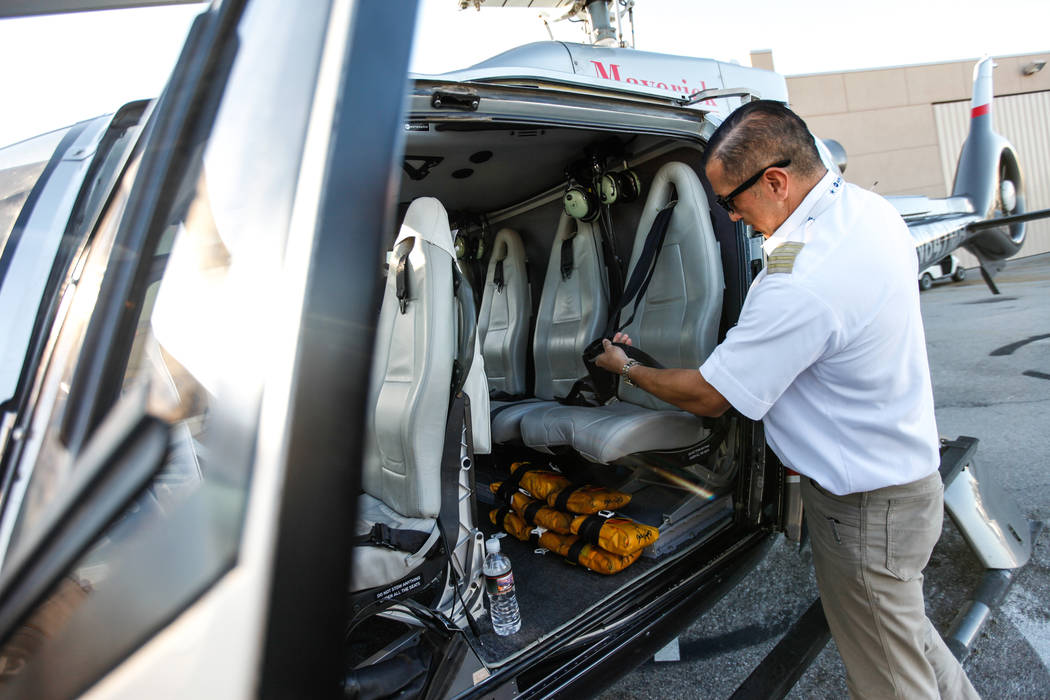 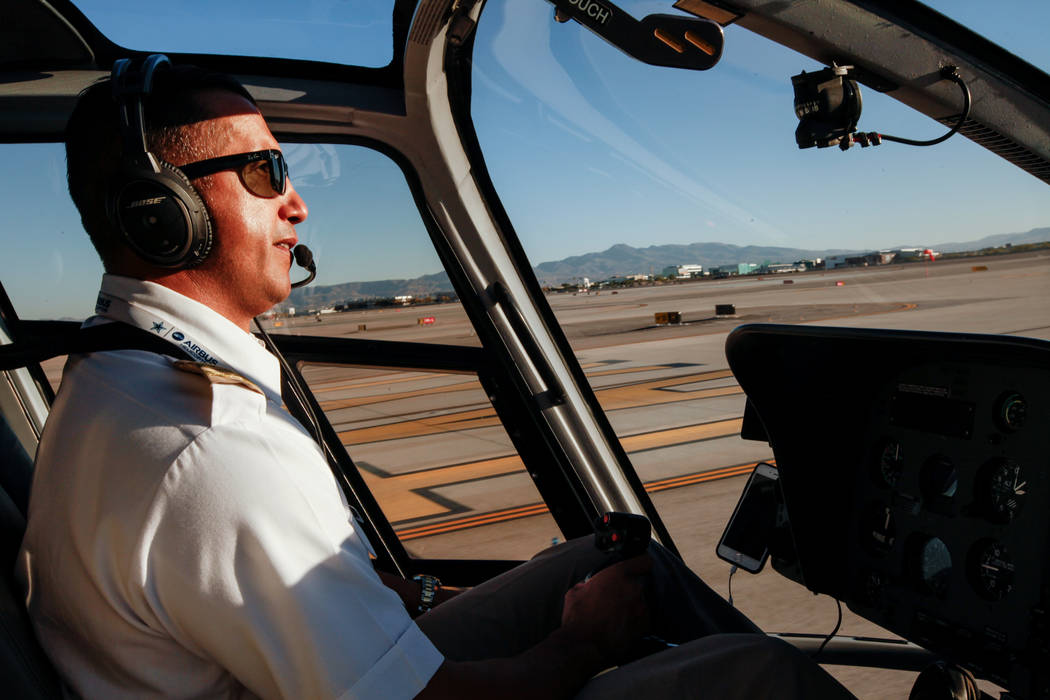 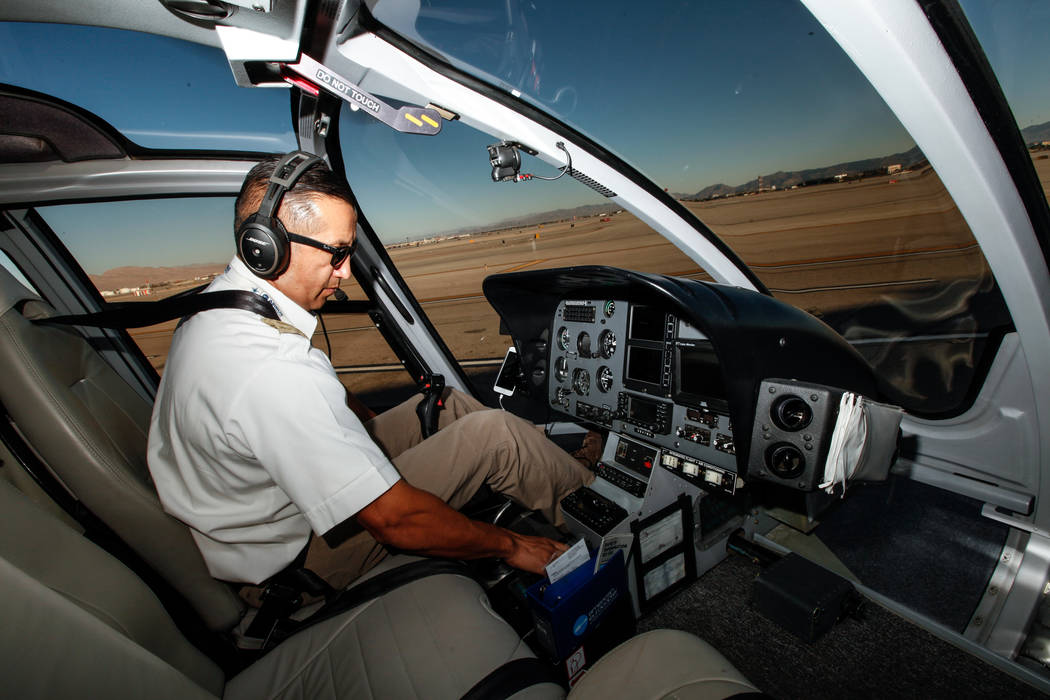 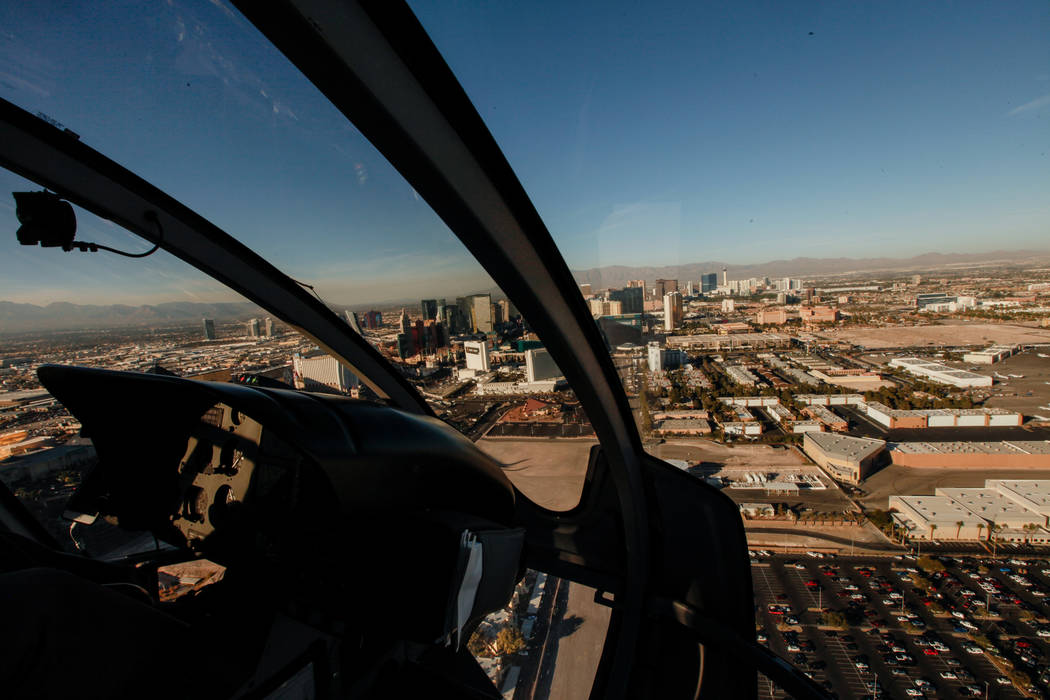 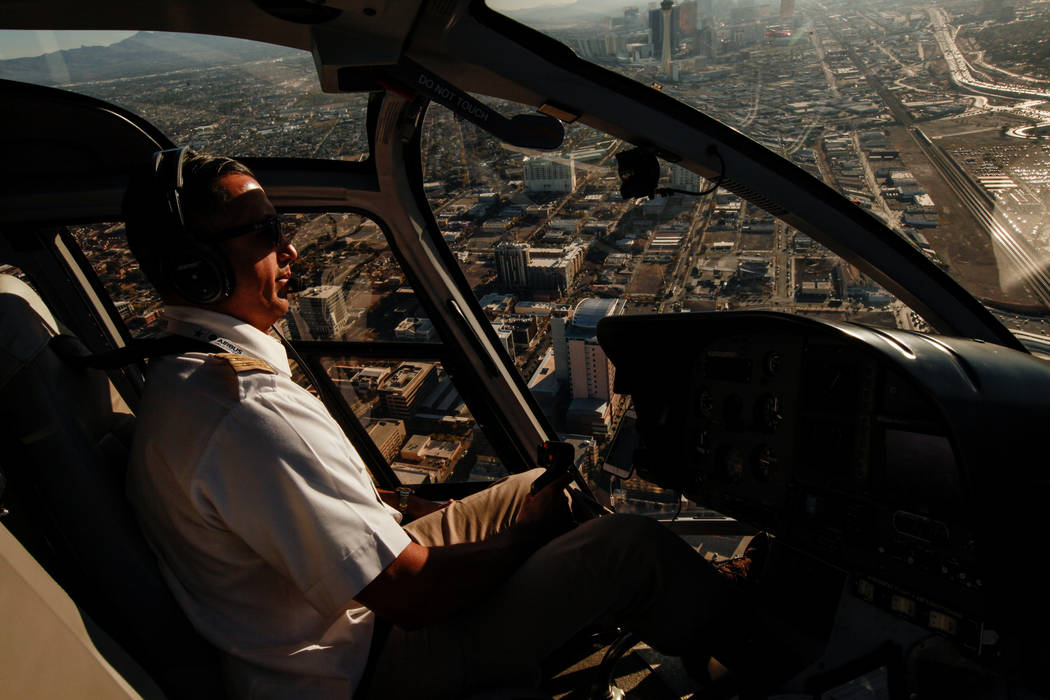 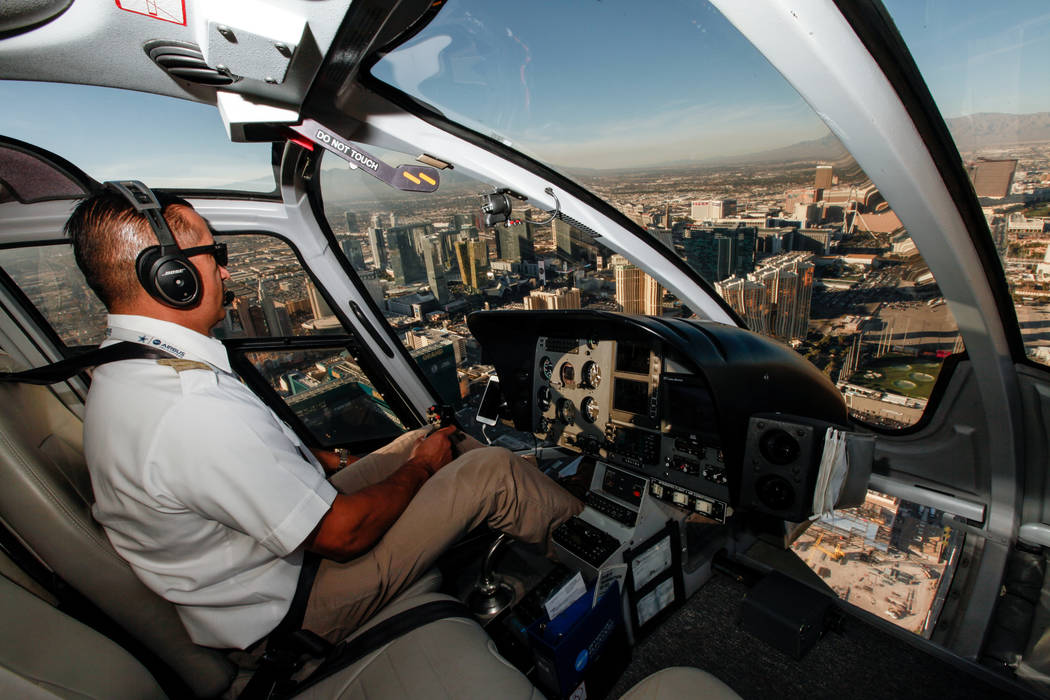 Joe Munoz’s job flying seven-passenger Airbus H-130s for Maverick Helicopters gives him a unique perspective on the Las Vegas Valley — from about 10,000 feet above ground.

The 41-year-old took his first flight at age 8, in San Francisco.

“My parents took me to San Francisco, Fisherman’s Wharf,” he recalls. “And they used to have helicopter rides around Alcatraz for $25, off the pier. They don’t do that anymore. But back then they used to do all kinds of crazy stuff.”

He’s been flying professionally for 26 years, the past 21 of them in Las Vegas. In addition to their popular tours of the Strip and the Grand Canyon, he and his co-pilots routinely fly tourists to San Francisco, Napa, Lake Powell, Zion and beyond. He’s also shuttled commuters to Los Angeles and customers to Parhump brothels.

In a recent pre-flight interview, Munoz shared some of his experiences in the air.

Review-Journal: Visually, what makes Las Vegas different from other cities you’ve flown in?

Munoz: Most people think there’s not much to see in the desert. They think, “Oh it’s just desert, and that’s it.” But there are a lot of pretty areas like Red Rock and Valley of Fire. Valley of Fire is probably one of the most underrated areas to visit. Obviously people want to see the Grand Canyon, because it’s on their bucket lists. But I think (Valley of Fire) is actually prettier than the Grand Canyon. People aren’t aware of how pretty everything is just within a short flight of Vegas.

How has the picture of Las Vegas from the sky changed since you’ve been here?

Do you ever discover new things from the sky that you want to check out in person?

I was just on a training flight just outside of town, and I found an abandoned silver mine in the side of a mountain. I had been in that area over 20 years, and had never seen it until that day. We went and checked it out. It was like a cave dug into the side of the hill, and the ore (cart) rails were still there. It was really cool.

How many people get sick up there, and what’s the best way to avoid it?

The people who get sick are usually here for a bachelor party. They’re out until six in the morning, and they’ve booked the first flight of the day. I’ve had people come in with the same clothes from (the previous) night, and they’re just miserable.

So first, don’t come in hungover. And if you’re not hungover and you don’t feel well, just look out to the horizon. If you keep your eyes on the horizon, it’ll usually help you out.

What percentage are terrified, and has anyone ever made you take them back?

We get a small amount who get terrified. Usually, as soon as they hear the engine, it freaks them out. So they want to stop right there, and we let them out. Or as soon as you close the door, they’ll want to get out. But I have had some people who do after takeoff, and I’ve had to turn around. We fly over 200,000 people a year, and I’d say of those 200,000, maybe 50, tops.

Are special events big for you?

We do transportation to NASCAR. (But) EDC is probably our busiest weekend of the year. We don’t shut down for three days and three nights. The majority of the artists fly with us. We see a lot of familiar faces, since we’ve been doing it since day one for all the DJs. It’s good to see everybody — like a miniature reunion.

When you fly around the venue, it looks like a carnival. Then flying back and forth, you just see the traffic. You’re looking at a 15-minute flight versus three to four hours to get out of there.

How close can you get to the Luxor light?

We used to fly through it a long time ago. It was pretty cool, and super-bright. But the FAA doesn’t allow us to do it anymore. There’s no hazard in it, but they just said “Hey, there’s a lot of bugs and bats in there, so you don’t want to hit those things.”

What’s the wildest thing you’ve been asked to do in this job?

I think I’m the only guy who’s ever landed on the Strip. Remember the magician (Steve Wyrick) who had that event in front of Planet Hollywood, and it went wrong? The trick was he was going to get in a box in front of Planet Hollywood and they were going to light it on fire. He snuck out of the box, and I had a helicopter on the roof of the parking garage. He was supposed to take the elevator up to my helicopter, and they’d light (the box) on fire, and I’d somehow manage to land on the Strip and let him out. So everything on my part went right, but something (else) went wrong, and the stuntman in the box got injured. That was still probably the coolest thing (for me), because I’ve never been able to land on the Strip again.

The Mandarin Bar, that’s like a secret gem. It’s not crowded because people don’t know about it. It’s just a beautiful view and a good place to bring guests who have never been here.

Football. I’m excited that the Raiders are coming. I definitely plan on getting season tickets. It’ll be nice to have a major sports team.

■ In my pocket right now

My wallet and a Gerber knife. We’re always finding remote areas, so you always need to cut something or open a package. You never know.

■ Food I could eat every day

I could eat sushi every day. A favorite is SushiSamba (at Palazzo). It’s really good, and I think underrated. But my new favorite place is Zuma (at The Cosmopolitan).