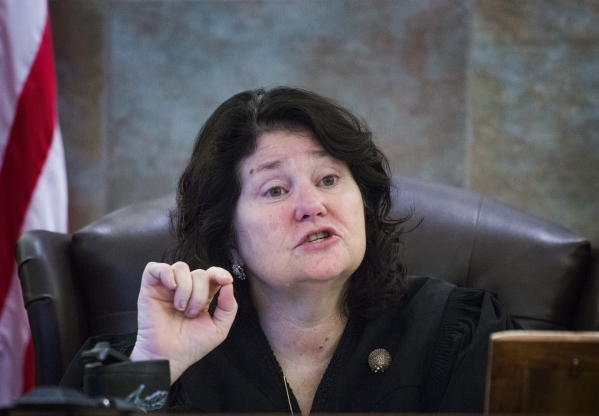 Clark County District Judge Elizabeth Gonzalez again has denied a bias toward or prejudice against Las Vegas Sands Corp. in a wrongful termination case the company has been fighting since 2010.

“I have been and will continue to be fair and impartial toward all parties in this case,” the judge wrote in a declaration filed Friday.

Chief District Judge David Barker has indicated he will rule by Wednesday on Las Vegas Sands’ current attempt to remove Gonzalez from the case, which was filed by former Sands China executive Steven Jacobs. If Gonzalez remains on the case, the trial is scheduled to begin June 27.

Barker on Jan. 29 denied the company’s previous attempt to disqualify Gonzalez, who has presided over the case for the past five years. The chief judge said Las Vegas Sands had presented no evidence that Gonzalez “has actual bias or implied bias either in favor of or against any party to this action.”

The Nevada Supreme Court previously denied requests to remove Gonzalez from the case.

Lawyers for Las Vegas Sands further argue that Gonzalez has a “long history of one-sided, erroneous and erratic rulings” in the case. Jacobs, former president and CEO of Sands China Ltd., was the head of operations in China for about nine months before he was fired in July 2010. Jacobs claims he was terminated “for blowing the whistle on improprieties and placing the interests of shareholders above those of [Las Vegas Sands Chairman and CEO Sheldon] Adelson.” Adelson as an individual and Sands China are also defendants in the case.

Gonzalez said in her new declaration that her rulings in the case “have been the result of critical legal and factual analysis based upon extensive evidentiary proceedings, motion practice, and the written and oral comments of counsel, and not the result of partiality or personal bias in favor of any party.” In her previous declaration, she also denied a bias toward or prejudice against Las Vegas Sands.

The judge could not be reached for comment Monday, which was a court holiday.

Ruben Garcia, who teaches legal ethics at the University of Nevada, Las Vegas Boyd School of Law, said it is common for judges to file declarations in response to disqualification motions.

“There’s nothing incorrect or unusual about doing that,” Garcia said. He declined comment on the merits of the Las Vegas Sands disqualification motion, however.

Las Vegas Sands’ most recent motion presents 12 points as evidence of Gonzalez’s bias against the defendants. They asked Barker to consider that she has:

—”Ordered one-sided, burdensome, and irrelevant jurisdictional discovery over an almost four year period contrary to US Supreme Court and other precedent;”

—”Required Defendants but not Jacobs (or seemingly other parties) to comply with oral discovery orders;”

—”Imposed one-sided sanctions — declining to impose sanctions where Jacobs misrepresented the volume of electronic data taken from Defendants but twice sanctioned the Defendants;”

—”Changed sanctions theories in September 2012 at the conclusion of her hearing to find “the client” had “deceived” her notwithstanding the absence of any evidence to support it;”

—”Sanctioned Defendant SCL for purported failure to violate the privacy law of its home jurisdiction under her oral discovery order, issued at the same time the record confirms she confirmed she would allow redactions;”

—”Seemingly made diametrically opposed rulings on behalf of Jacobs’s lawyers at the same time they were lawyers for a defendant client of theirs in another matter being decided in same timeframe;”

—”Found jurisdiction over a foreign defendant on legal theories specifically precluded by binding US and Nevada Supreme Court precedent;”

—”Made disparaging remarks about Defendants;”

—”Helped shape the litigation strategy of the Plaintiff; and”

—”Insisted on ruling on the propriety of questions that were of personal interest to her but otherwise irrelevant to the proceedings.”

“Leading up to, and during the jurisdictional hearing, the Court ordered depositions and hearing testimony from 14 of Defendants’ senior executives, management, and company lawyers for more than 133 hours … while Defendants were not permitted to call any witnesses at the hearings or permitted access to Jacobs for deposition until just before the jurisdictional hearing under circumstances that made it impractical to review his 200,000+ page document dump or depose him at the same time as final preparation for the hearing had to be completed per the Court’s order,” they wrote.

In March, Gonzalez ordered hefty sanctions against Sands China for improperly withholding documents in the case. One sanction barred the company from calling any witnesses during a hearing on the question of jurisdiction.

After the hearing, which featured four days of testimony from Adelson, Gonzalez ruled that she has jurisdiction over Sands China in the matter. In an unpublished order filed in November, the state Supreme Court agreed with Gonzalez’s rationale “as to why it would be reasonable to require Sands China to appear in Nevada state court.” However, the ultimate question of jurisdiction will be decided at trial, according to the order.

The high court also upheld $250,000 in sanctions levied by Gonzalez against Sands China, which is 70 percent owned by Las Vegas Sands.

Attorney Todd Bice, who represents Jacobs, has called the most recent attempt to remove Gonzalez from the case “meritless.”

“The Nevada Supreme Court has already addressed these issues and rejected their attempts to remove the judge multiple times,” Bice said Monday. “Their position appears to be that any judge who finds that a litigant has engaged in improprieties should somehow be removed, which isn’t the law anywhere.”

Dumont had refused to answer any questions about contact with Michael Schroeder, a Connecticut newspaper owner associated with the Adelson family’s Dec. 10 purchase of the Las Vegas Review-Journal. Dumont was instrumental in the purchase.

One of Schroeder’s Connecticut newspapers on Nov. 30 published a plagiarized, partially fabricated article that was critical of Gonzalez. The article was published about the same time that three Review-Journal reporters were ordered by GateHouse Media, the newspaper’s former owner, to monitor Gonzalez and two other judges.

Gonzalez ruled that Dumont’s lawyer had acted inappropriately under Nevada law when he directed his client not to say whether he had discussed Jacobs or the wrongful termination case with Schroeder. Dumont’s deposition continued after the Jan. 12 hearing, but his answers to questions that day remain sealed.

“Rather than concede her personal interest and conflict in wanting the answers to Jacobs’s counsel’s questions about the newspaper for personal reasons wholly unrelated to this out-of-control, wrongful-termination suit, the District Court promptly confirmed her personal interest in knowing Dumont’s role in publicity involving her handling of the case and her interest in favorable media coverage,” the lawyers wrote.

Dumont’s lawyer, Hersh Kozlov, could not be reached for comment Monday. Las Vegas Sands spokesman Ron Reese said the 12 reasons the company outlined in its filing last week explain why Gonzalez should be removed from the case, but he otherwise declined comment.

Gonzalez said in her first declaration that she responded to two media requests for comment about the RJ’s courtroom monitoring — one from the Review-Journal itself, the other from Time magazine. She said both publications correctly reflect that she “did not discuss a particular litigant or case.”

Jacobs recently accused Dumont of trying to conceal his involvement in communications with Schroeder, and offered as an exhibit parts of deposition transcripts that remain sealed.

Jacobs argued that Dumont and others, including Las Vegas Sands’ general counsel Ira Raphaelson, communicated with Schroeder “in order to generate media spin to try and undermine Jacobs’ claims.” The document further alleges Dumont’s lawyer instructed him not to answer questions because they would confirm his and Adelson’s relationship to Schroeder and the “ongoing campaign to smear Jacobs.”

“The fact that they have been caught is no basis for a judge’s recusal. If it were, then every wealthy litigant with access to media sources — in this case the ownership of one — could engage in forum shopping whenever their misconduct comes to light. The law is otherwise and for good reason,” according to the filing.

In her most recent declaration, Gonzalez also addressed a concern by Las Vegas Sands that she had referred to a defense privilege log as “crappy.” The judge said her description was accurate because the log, a list of documents Las Vegas Sands claimed were protected from disclosure by some type of legal privilege, was “woefully inadequate.”

Gonzalez also specifically addressed Las Vegas Sands’ claim of disparate treatment between the company and Wynn Resorts Ltd., which has been involved in unrelated litigation against Kazuo Okada. Jacobs’ lawyers represent Wynn Resorts in that matter, which also was assigned to Gonzalez.

Las Vegas Sands lawyers have argued that Gonzalez’s treatment of the defendants in the Jacobs case has been “noticeably inconsistent with how she has treated Jacobs’s counsel and their corporate client when they appear before her as counsel for Wynn Resorts in the Okada case,” which also involves “balancing” Macau’s data privacy law to comply with discovery requests.

Gonzalez stated that issues related to discovery and the Macau Personal Data Protection Act “are very different between the two cases.”

The judge previously ruled that defendants in the Jacobs case could not raise Macau’s data privacy law as an objection to the disclosure of any documents.

She made the ruling after learning that “significant amounts of data from Macau related to Jacobs was transported to the United States” and reviewed by in-house counsel for Las Vegas Sands and outside counsel. The judge also determined the data were relevant to Nevada legal jurisdiction over Sands China.

The defendants concealed the existence of the transferred data from the court until June 2012, the judge later ruled. She also ruled that Sands China violated her September 2012 order in the case by redacting documents. Ongoing violations of that order led to the hefty sanctions in March.