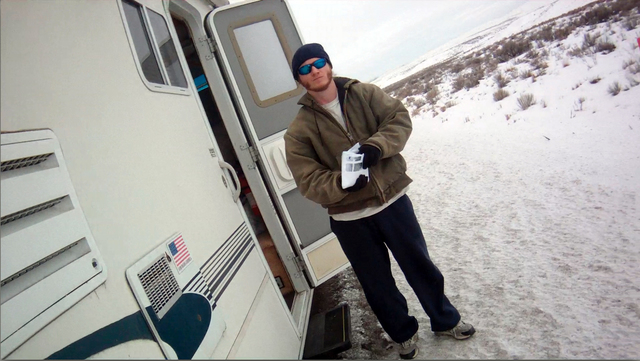 Straughn Gorman seen in this still image from an Elko County Sheriff's Department video shot during a traffic stop on Interstate 80 between Wells and Elko in January 2013. A federal judge has ordered authorities to return $167,000 seized from Gorman.

Citing a lack of candor by the government in its court papers, a federal judge has ordered the return of $167,000 seized from a man’s motor home during a traffic stop near Elko.

State and local law enforcement officers stopped Straughn Gorman, a resident of Hawaii, twice within 50 minutes in January 2013 as he was driving the motor home west on Interstate 80 between Wells and Elko, according to court documents.

A Nevada Highway Patrol trooper said he first stopped Gorman for driving too slow in the fast lane, but after Gorman refused to let him search the motor home he was allowed to go on his way without a citation for anything.

The trooper then arranged for an Elko County sheriff’s deputy with a drug-sniffing dog to stop Gorman again, and the dog alerted the deputy to something suspicious in the motor home, documents show. The search turned up no drugs but the $167,000 was found hidden in various places.

Gorman was not charged with any crime, but his money was seized and turned over to federal authorities for civil forfeiture proceedings. Authorities suspected he was on his way to California to buy marijuana, though Gorman said he was going to visit his girlfriend in Sacramento.

In his June 12 decision, Senior U.S. District Judge Larry Hicks chastised the Nevada U.S. Attorney’s office in Reno for not revealing details about the related first stop in their forfeiture papers.

“In particular, the government has a duty of candor and fair disclosure to the court,” Hicks wrote. “The court expects and relies upon the United States attorney’s office to be candid and forthcoming with material information uniquely held only in possession of the government and clearly relevant to central issues before the court. That did not occur here”

U.S. District Judge Andrew Gordon ruled that FBI and state gaming agents conducted an illegal search posing as Internet repairmen to gain access to Phua’s luxury Caesars Palace villa before they carried out a court-approved raid there. Agents did not inform the judge who approved the raid about the unprecedented ruse.

Gordon tossed out the evidence against Phua and later dismissed the case after federal prosecutors said they no longer had enough evidence to move forward to trial. Prosecutors are considering appealing Gordon’s decision.

“This district has recently emphasized the importance of candor to the court at all stages of investigation,” Hicks said in a footnote to his decision on the Gorman forfeiture proceedings.

Gorman’s Las Vegas lawyer, Vincent Savarese, said he was pleased with the ruling.

But, he added, “I am dismayed that it required so much effort and litigation to bring the truthful facts to light that allowed Judge Hicks to make an informed decision.”

Savarese said Gorman, who works for a beach activities company in Hawaii, does not have a criminal record. But prosecutors pointed out in court papers that for months after the traffic stops he asserted his Fifth Amendment right against self-incrimination and refused to answer written questions about the seized money.

Highway seizures along I-80 by local authorities in Northern Nevada have come under fire in recent months, and some lawsuits have been filed challenging their constitutionality.

Hicks said in his decision that the traffic stops in 2013 violated Gorman’s Fourth Amendment rights and were not conducted with “independent reasonable suspicion.

“No matter how this can be viewed, the two stops were for minor traffic violations and they both were extended beyond the legitimate purposes for such traffic stops,” Hicks wrote.

The second stop wouldn’t have happened if information from the first stop had not been “relayed” by troopers, Hicks explained.

He said Gorman is entitled to lawyers fees from the government and invited a motion seeking compensation.