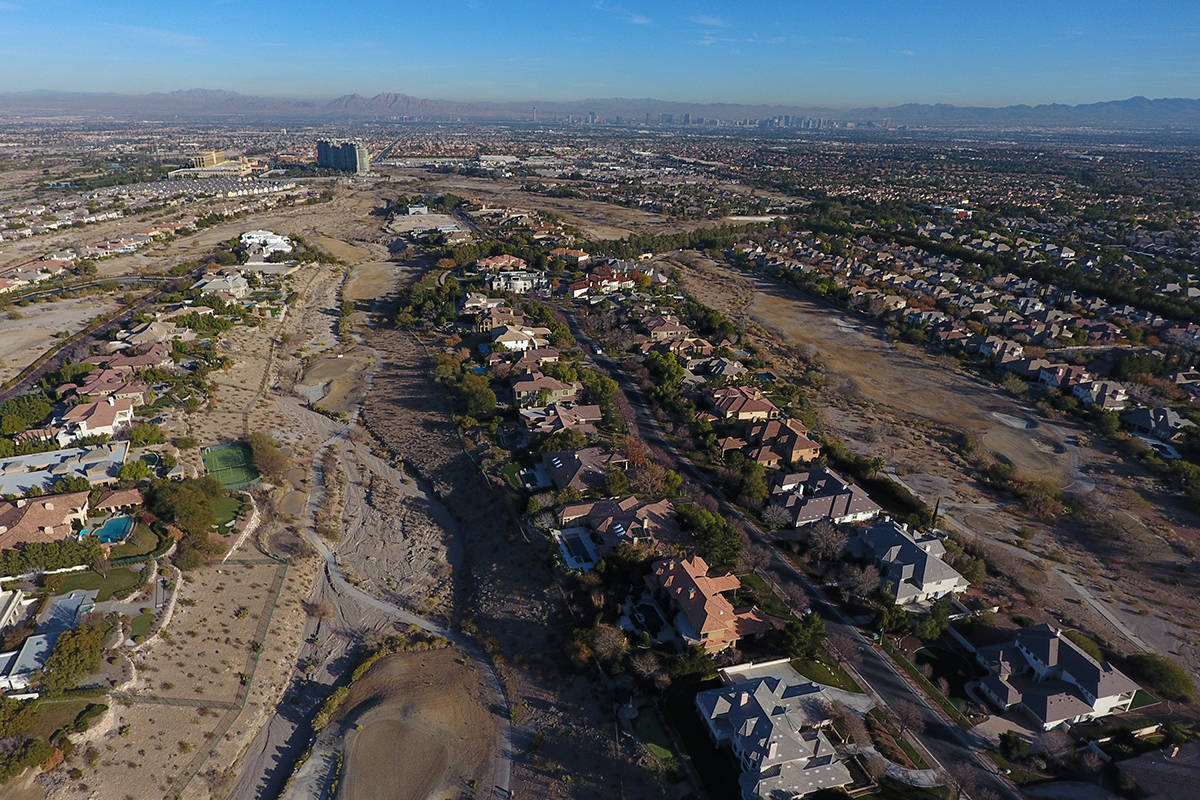 The city of Las Vegas scored a courtroom victory in one of the long-running legal cases surrounding the defunct Badlands golf course.

Now-former District Court Judge Douglas Herndon ruled Dec. 29 on accusations that the city took 65 acres from the landowner, concluding that the case wasn’t ripe as he granted the city’s motion for summary judgment. Herndon on Monday was sworn in to a seat on the Nevada Supreme Court.

Herndon concluded a regulatory takings claim requires a developer to file at least one application that is denied and then another — with some change to the project, such as a smaller footprint — that is also rejected.

No evidence was presented that developer EHB Cos., which owns the land and controls the companies named as plaintiffs in the 2018 lawsuit, submitted any proposed project for the city to consider on the 65-acre parcel, according to Herndon’s ruling.

It is just one of four similar inverse condemnation lawsuits that EHB has filed against the city, accusing it of actions that have effectively wiped out much of the economic value or use of its 250-acre plot near Summerlin. Each case is focused on different parcels and, as of Thursday, only the lawsuit specific to the 65 acres had been ruled on.

Lawsuits separately alleging that 133, 35 and 17 acres of property were taken by the city remain pending and EHB — unlike with the 65-acre site — had previously submitted project applications for those plots, according to court records.

In his ruling, Herndon stopped short of addressing the merits of any remaining issues disputed by both sides since the three companion cases were still being litigated, suggesting that doing so might have been construed as having a limiting effect on other pending court actions.

Herndon, who was elected in November to the state Supreme Court, said during a Dec. 16 hearing before his ruling that he got the sense that one or more of the four cases were destined for the high court, according to a court transcript of the hearing.

Attorney Kermitt Waters, who is representing the plaintiffs, confirmed on Wednesday that Herndon was right.

“We disagree like we have before,” Waters said about the ruling. “It will be appealed to the Nevada Supreme Court and I am highly, highly confident that it will be reversed.”

EHB, the developer behind projects such as One Queensridge Place and Tivoli Village, has embarked on a costly and protracted legal battle against the city over the past few years as it tried to build homes on the former golf course.

EHB had sought $101 million in damages for the alleged taking of just the 65-acre part of its land, the city’s attorneys said in court filings. Las Vegas has spent more than $3.2 million over the past five years on legal fees and staff costs, which spans beyond the inverse condemnation cases, as of Dec. 30, according to city records.

Plans to develop the 250 acres over the years were met with resistance by neighbors in the nearby affluent Queensridge community and the majority on the city council. High density, lowered property values on nearby land and a piecemeal approach to development were among the concerns.

The developer alleges that the city restricted its private property rights, required it to provide ongoing public access to its land and refused to accept applications, making it impossible to build.

“I’m not sure there could be more that a government entity could possibly do to a landowner to interfere with the use and enjoyment of their property that’s been done here,” EHB attorney James Leavitt said during the mid-December hearing, according to court transcripts.

City lawmakers ultimately granted permission in 2017, however, for EHB to construct 435 luxury condos on 17 acres at the closed golf course’s eastern edge near Alta Drive and Rampart Boulevard. The decision was reaffirmed by the state Supreme Court in March after it had been invalidated in District Court.

In court filings, the city’s lawyers argued that the city holds broad discretion over land use and pointed to the condo project’s greenlight as a sign that Las Vegas is open to considering development at the location.

Andrew Schwartz, an attorney representing the city, said during the Dec. 16 hearing that the city’s approval of the condos increased the value of the 17-acre property by four times, citing figures he said were provided as evidence by the developer’s lawyers.

“You know, if the Constitution required that the taxpayers pay money to this developer here after its already quadrupled its money with 233 acres of property left, then, you know, it brings to mind that line from Dickens that you may be familiar with: If the law supposes that, then the law is an ass,” he said, according to court transcripts.