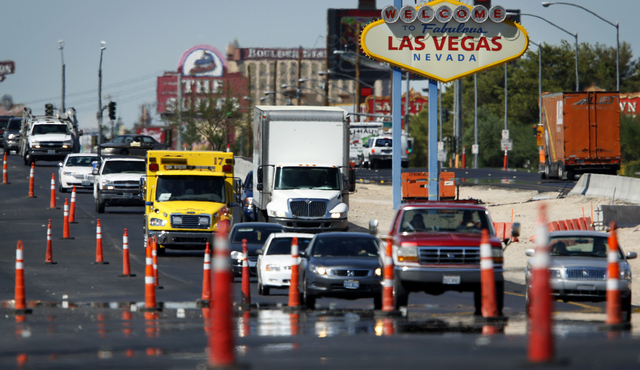 Motorists maneuver through traffic cones in a construction zone on Boulder Highway near the divide between the cities of Las Vegas and Henderson. (John Locher/Review-Journal File)

Here’s a report to contemplate when you’re stuck in traffic.

An index created by the Dutch mobile navigation and mapping company said that of Southern Nevada’s network of 137 miles of highways and 14,283 miles of non-highway surface streets, Las Vegas has a 21 percent congestion level, which means motorists spend 21 percent more time on the road than they would in a free-flow environment.

The study said the average Las Vegas motorist experiences an 18-minute delay in peak periods. That translates to being stuck in traffic 53 hours a year for those having a 30-minute commute.

The study, the company’s fourth since 2011, compared traffic in 186 cities across six continents.

The worst of Las Vegas’ congestion occurs on surface streets, which have a 24 percent congestion level compared with 9 percent on highways.

The study said Las Vegas congestion is getting worse, but in only four U.S. cities — Honolulu, New Orleans, Pittsburgh and Louisville, Ky. — were congestion levels lower in 2013 than the year prior.

Other Las Vegas highlights from the report:

* The Monday evening commute is the easiest of five weekdays, with a congestion index of around 31 percent.

* Cities with the lowest congestion index in the United States are Kansas City, Mo., and Indianapolis.

* Las Vegas saw its worst congestion of 2013 on Thursday, Nov. 21. That was the day Las Vegas received nearly a half-inch of precipitation at McCarran International Airport, the biggest rainfall total of the year.