If you are having problems accessing today’s e-Edition, please click on this link VIEW E-EDITION
By Max Michor / Las Vegas Review-Journal
July 21, 2019 - 3:34 pm 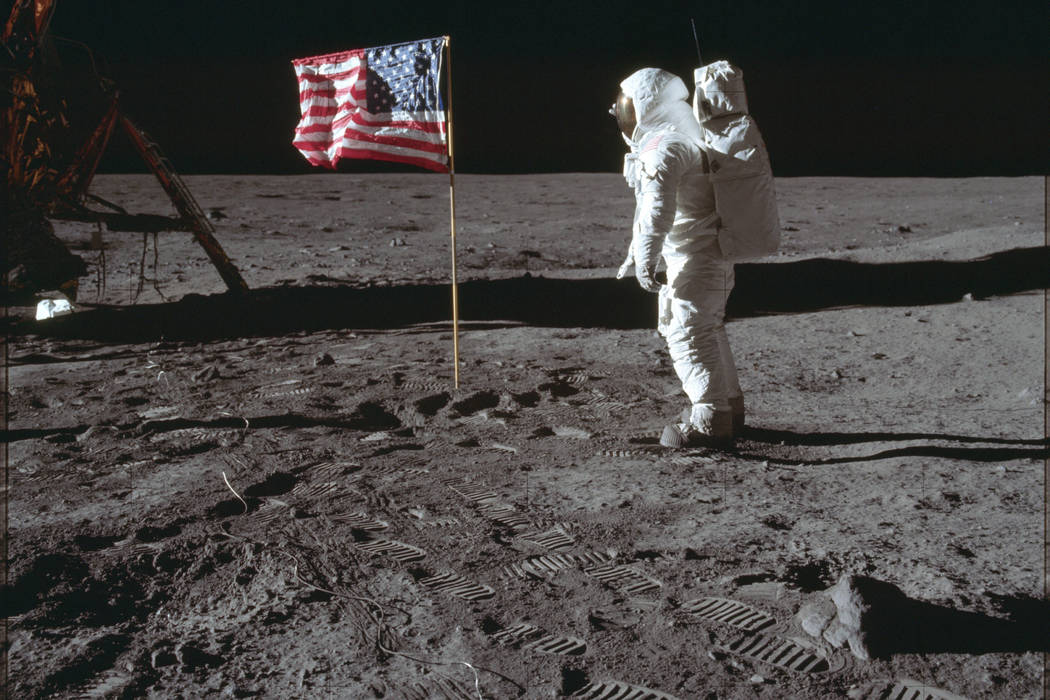 In this July 20, 1969 photo made available by NASA, astronaut Buzz Aldrin Jr. poses for a photograph beside the U.S. flag on the moon during the Apollo 11 mission. Aldrin and fellow astronaut Neil Armstrong were the first men to walk on the lunar surface with temperatures ranging from 243 degrees above to 279 degrees below zero. Astronaut Michael Collins flew the command module. (Neil Armstrong/NASA via AP)

Three film reels containing footage of man’s first steps on the moon sold Saturday for just over $1.8 million at auction, about 8,000 times more than what a Las Vegas engineer paid for them in the 1970s.

They were discovered by Gary George, a former NASA intern, who bought a box full of 2-inch reel-to-reel tapes for about $218 in the 1970s at a government surplus sale, according to auction house Sotheby’s.

George planned to sell his box of tapes at a profit to television stations that could record over them, Sotheby’s said, until his father noticed that three tapes were labeled “APOLLO 11 EVA” and dated July 20, 1969.

Sotheby’s said George discovered what was on the tapes in 2008, when NASA put the call out for the missing recordings near the moon walk’s 40th anniversary.

NASA released a statement after the news of the auction broke, clarifying that it didn’t “lose” the moon landing tapes. When the walk was filmed, data was relayed to multiple sources and recorded at ground stations in California and Australia.

What NASA was searching for are the original 14-track tapes from those ground stations, which were likely erased and reused, according to the statement. The footage was broadcast live on television, and a team from NASA discovered higher-quality recordings from the broadcast that were later remastered and released in high definition in 2009.

“There was no video that came down slow scan that was not converted live, fed live, to Houston and fed live to the world,” NASA engineer Dick Nafzger said at news conference showing some of the restored footage in 2009. “So, just in case anyone thinks there is video out there that hasn’t been seen, that is not the case.”

The video that Nafzger and his team discovered was fed directly from mission control at Houston to CBS, and still existed in the archives.

NASA stated the tapes don’t have any unseen footage, but were likely recorded at mission control in Houston from video that was converted to a format that could be broadcast on television. The original footage was recorded and sent to Earth at only 10 frames per second.

George held onto the tapes for another 10 years, waiting for the 50th anniversary of the Apollo 11 flight. The trio of tapes sold for $1.82 million to a private bidder, Sotheby’s said.