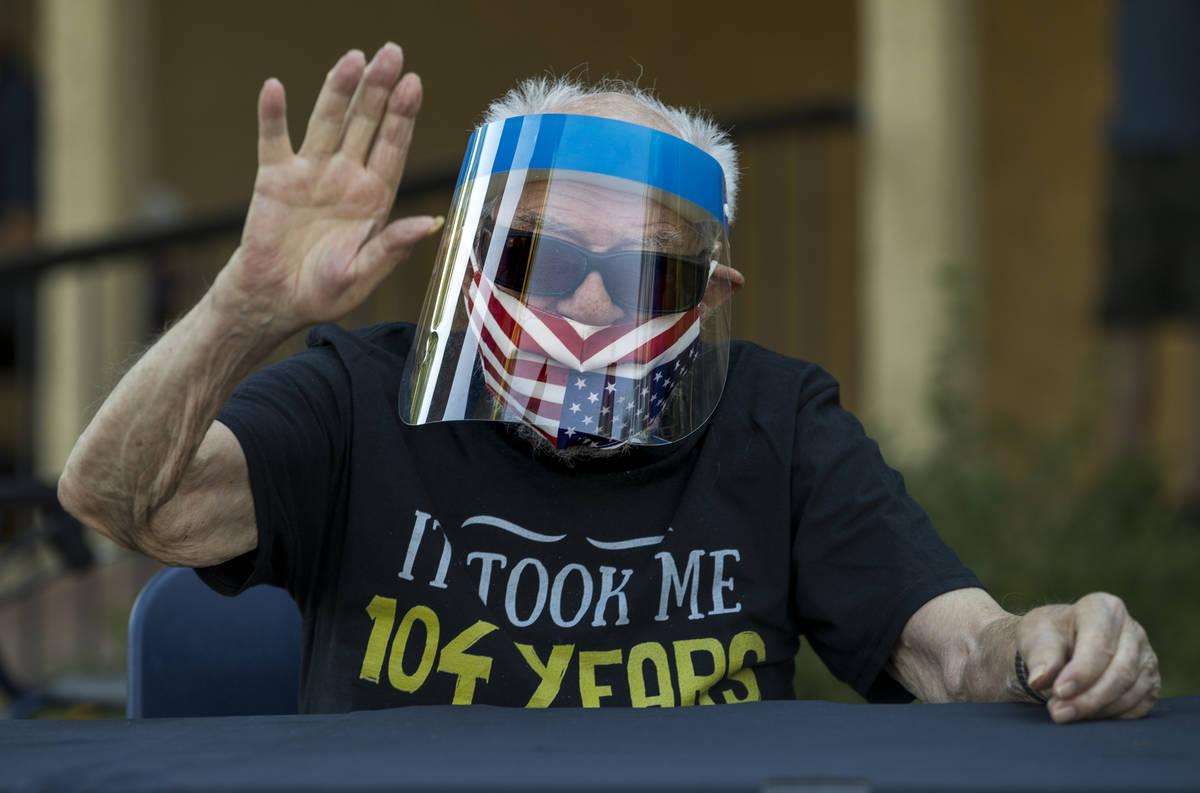 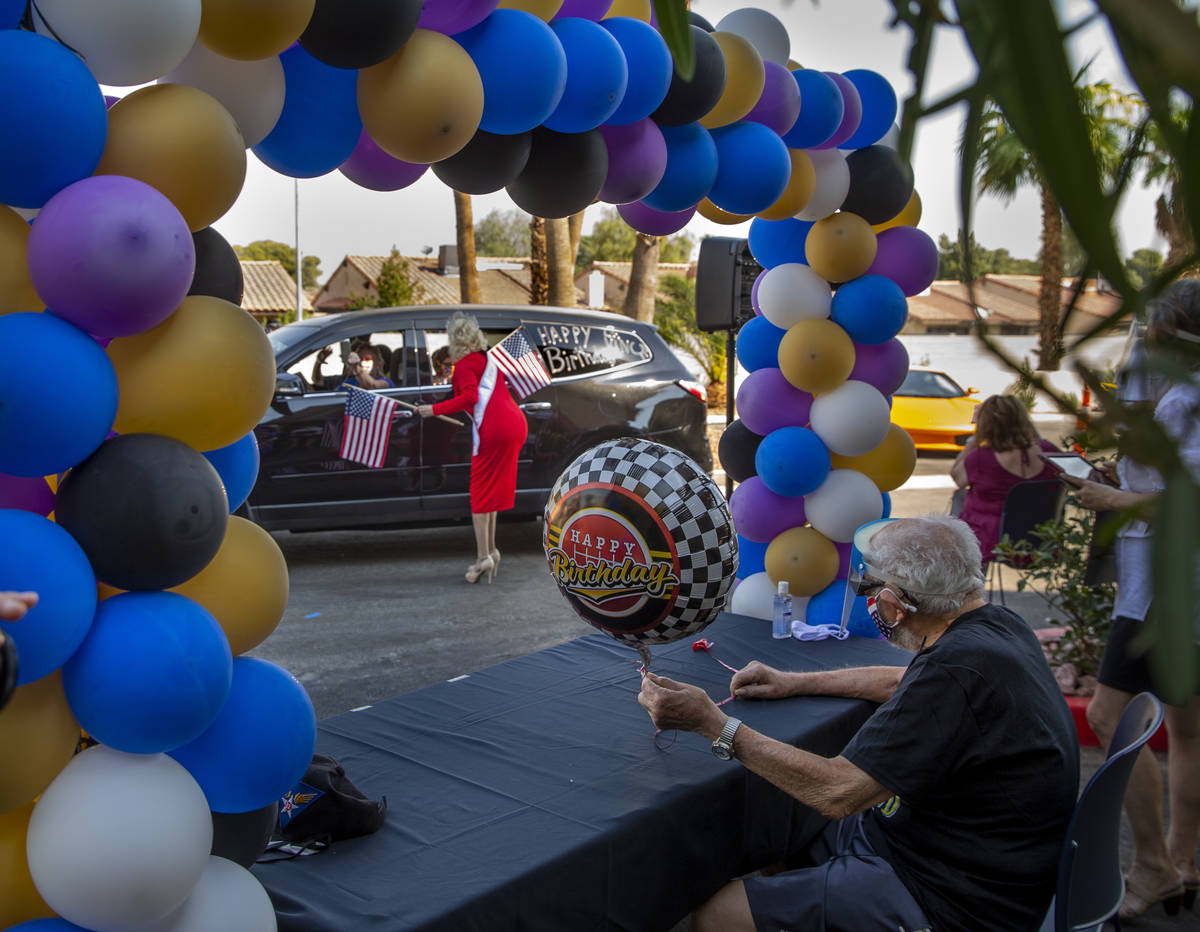 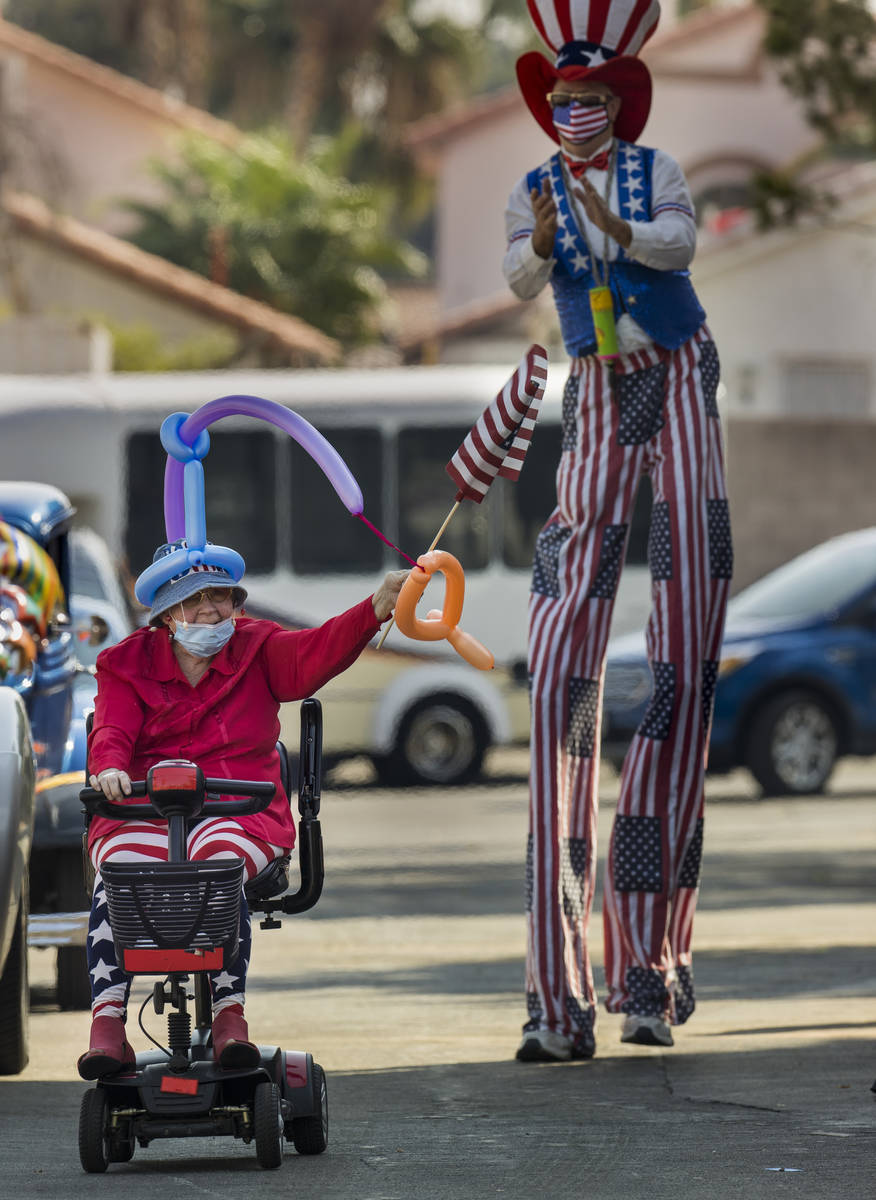 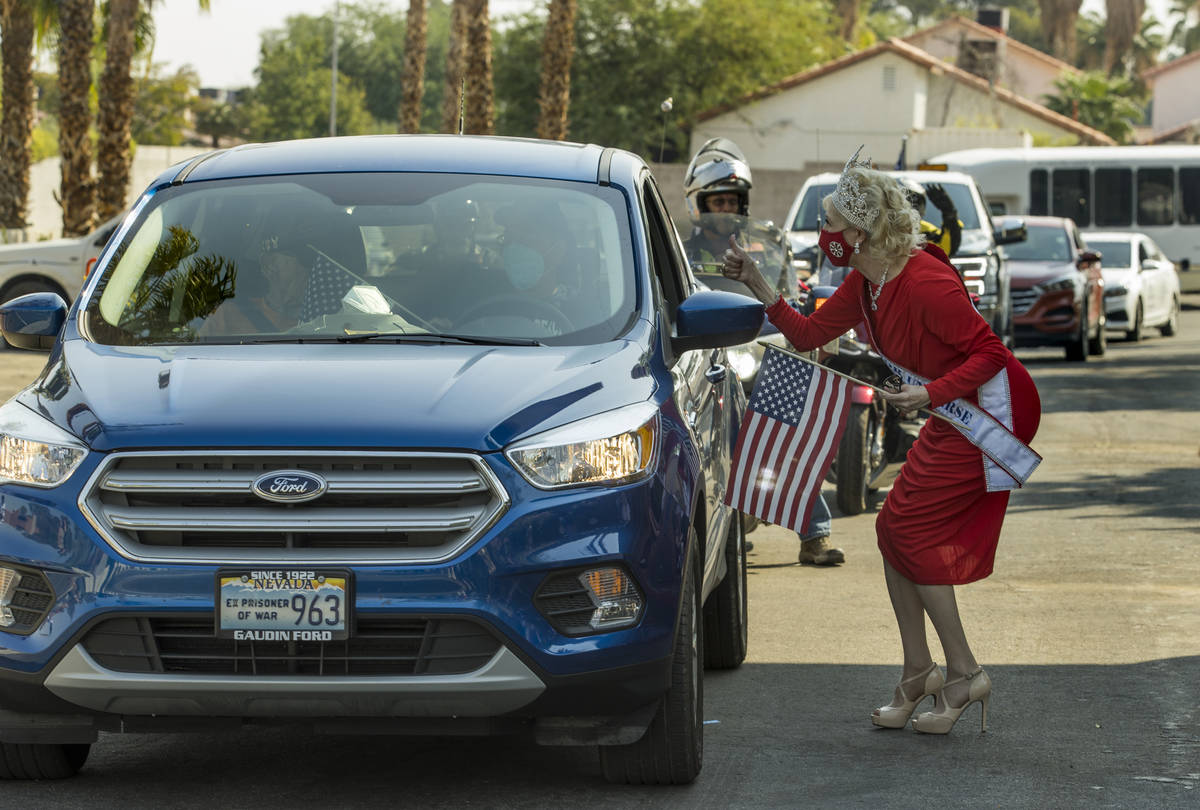 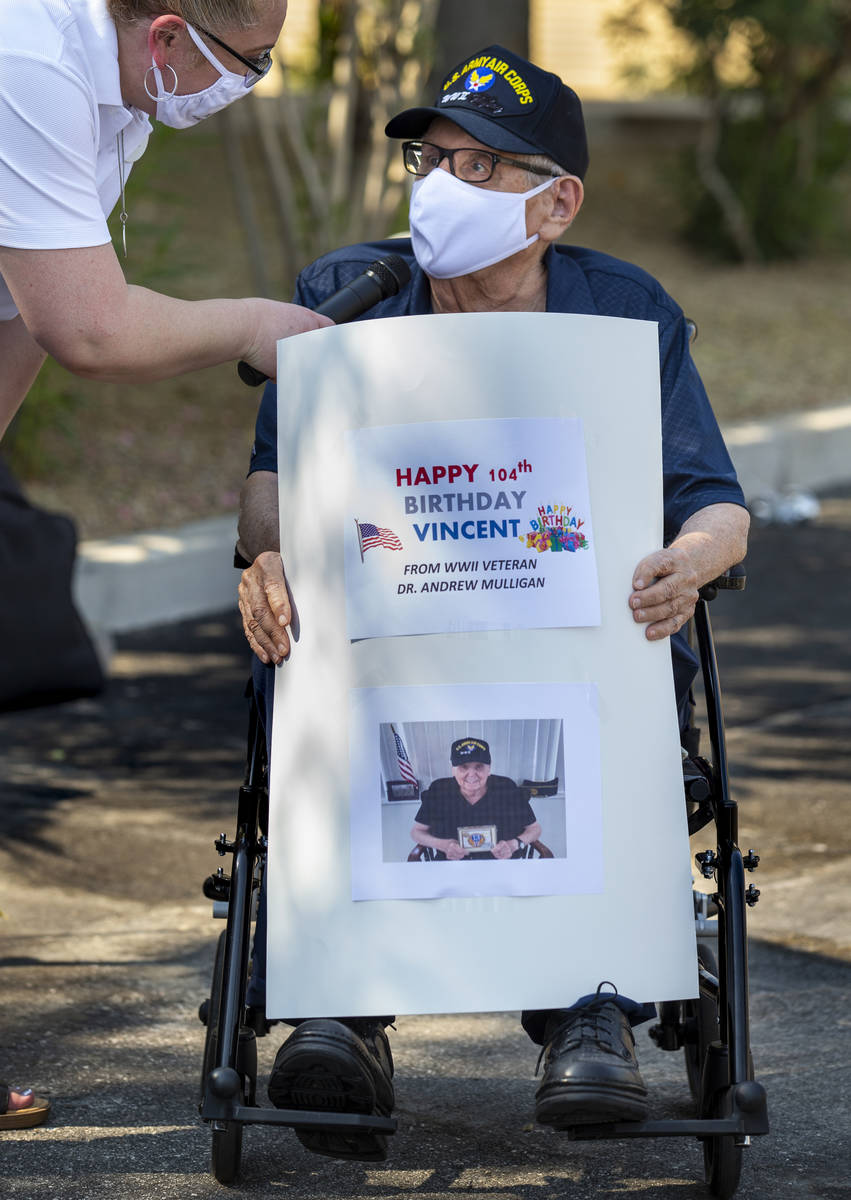 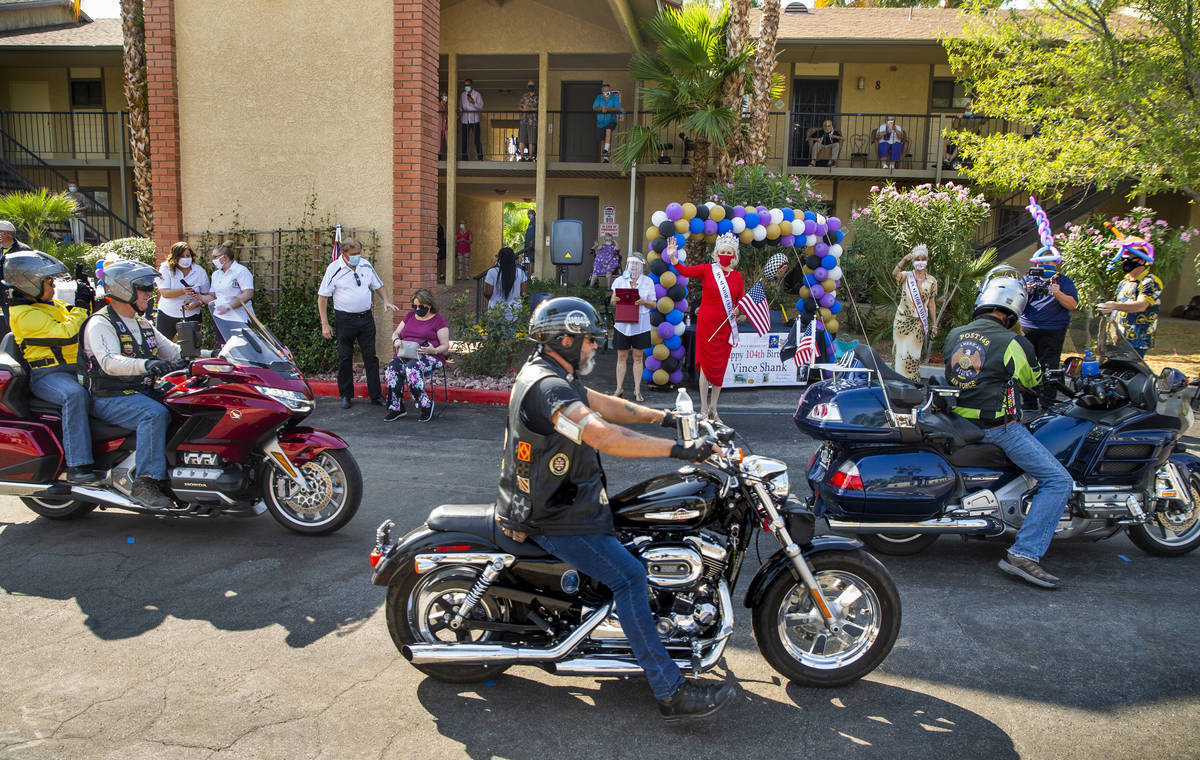 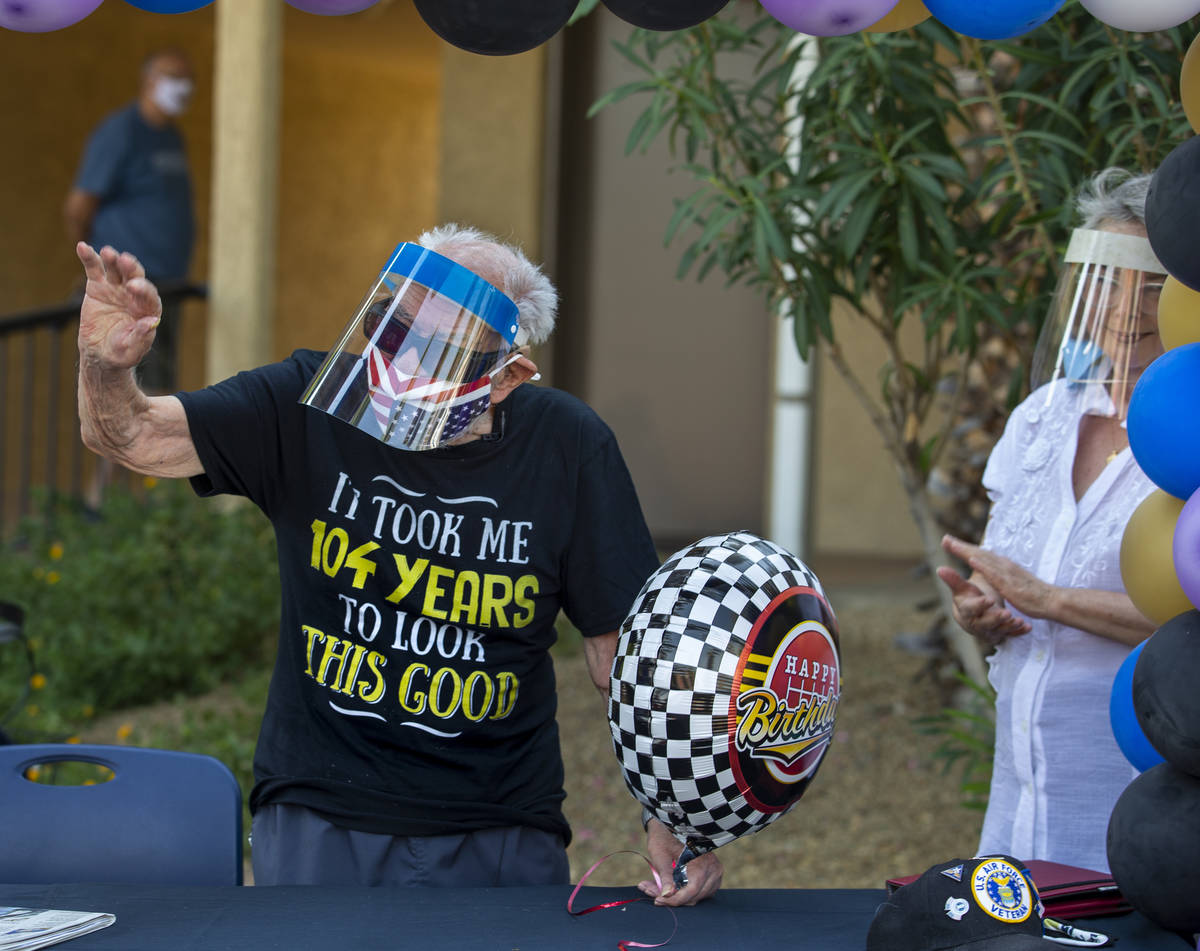 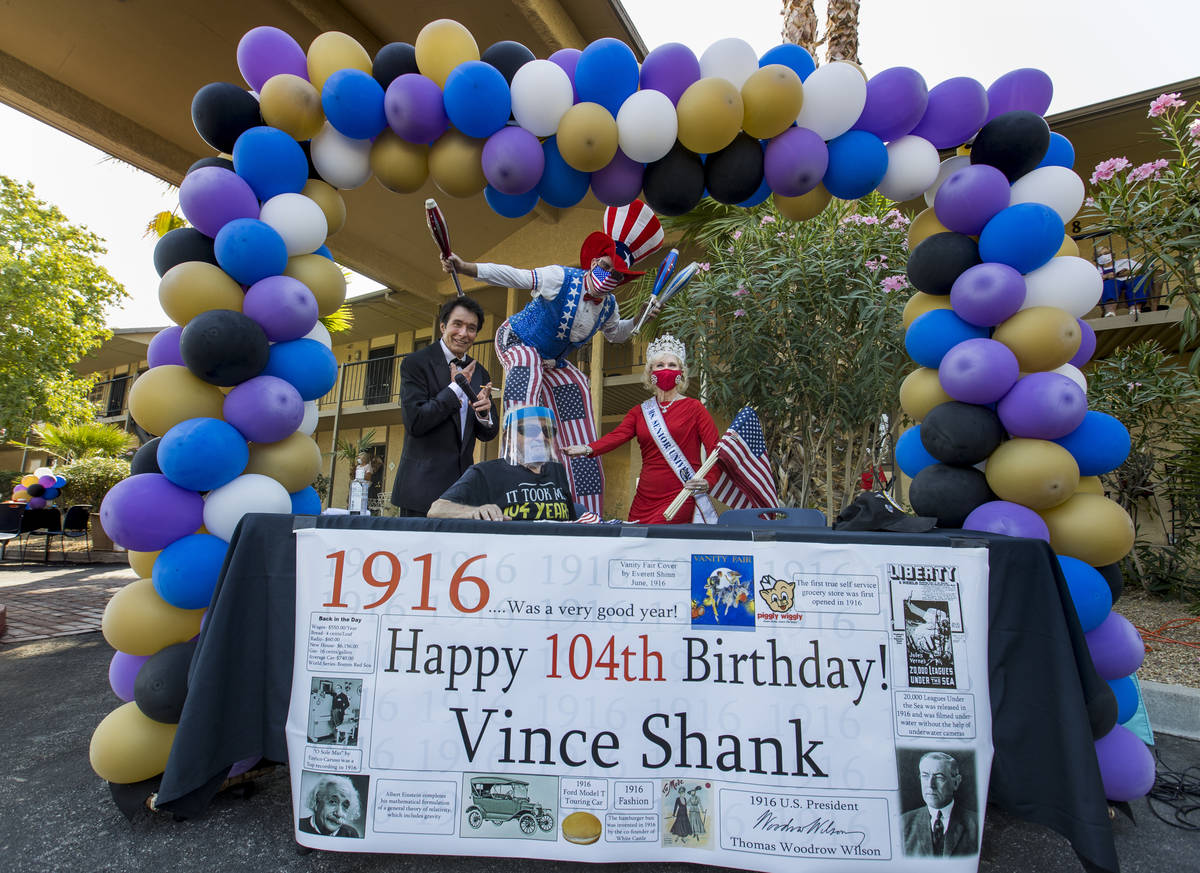 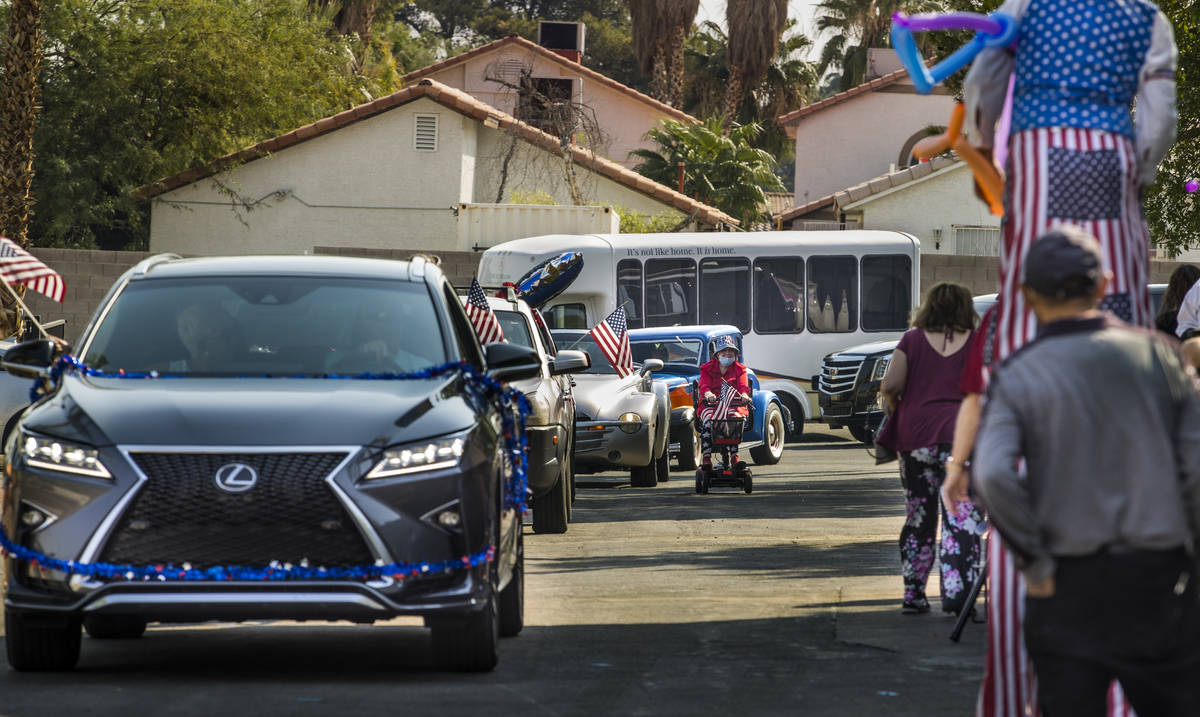 A car parade winds around the parking lot at Echelon Senior Living in honor of Vincent Shank, a World War II veteran and ex-POW turning 104 today and having a birthday party in his honor on Saturday, Sept. 19, 2020, in Las Vegas. (L.E. Baskow/Las Vegas Review-Journal) @Left_Eye_Images 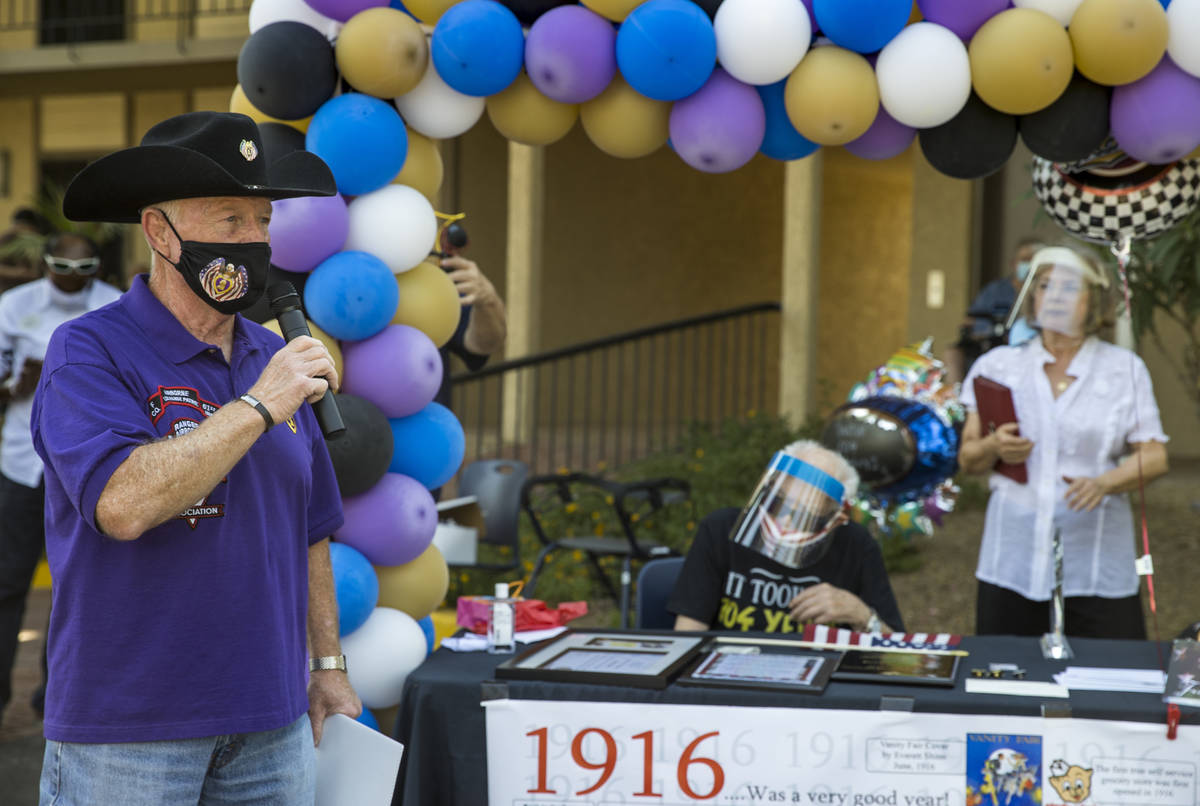 Richard Moyer, left, has some kind words for Vincent Shank, center, a World War II veteran and ex-POW turning 104 today during a birthday party in his honor at Echelon Senior Living on Saturday, Sept. 19, 2020, in Las Vegas. Moyer is commander at The Military Order of the Purple Heart Chapter 711 in Las Vegas. (L.E. Baskow/Las Vegas Review-Journal) @Left_Eye_Images 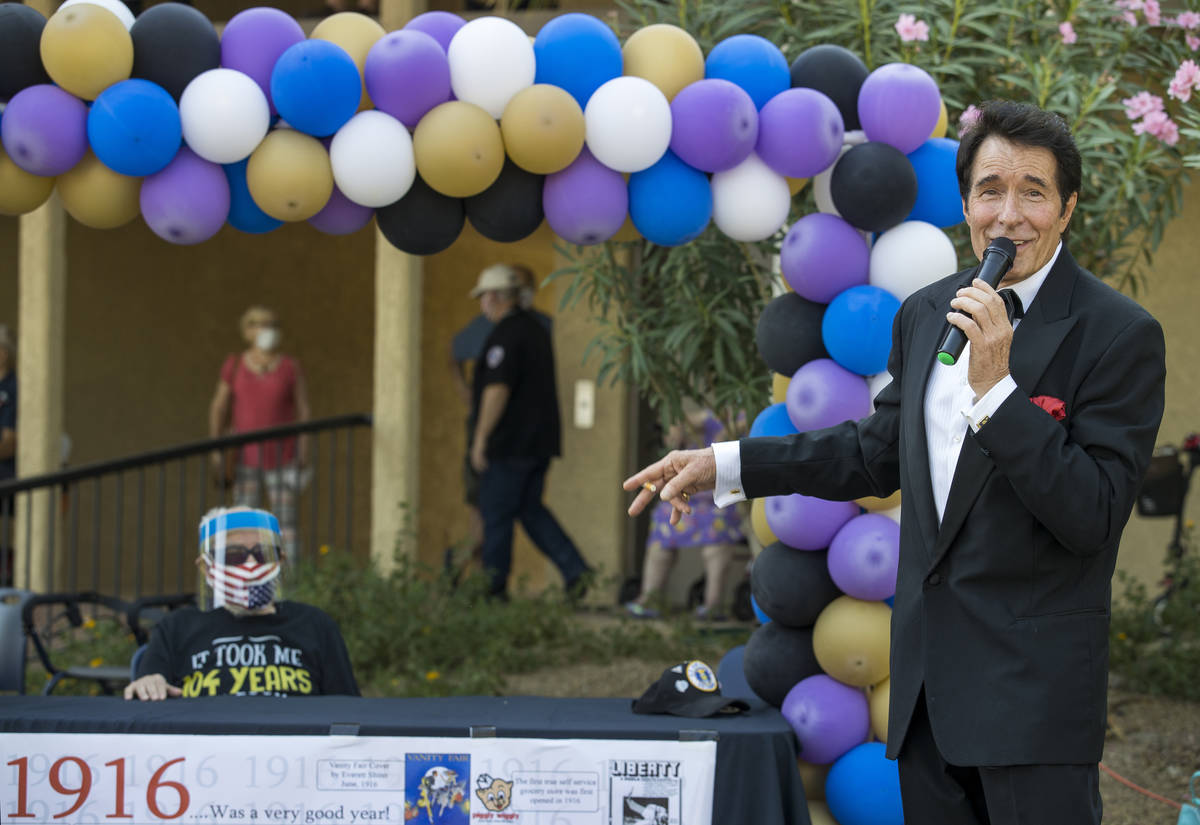 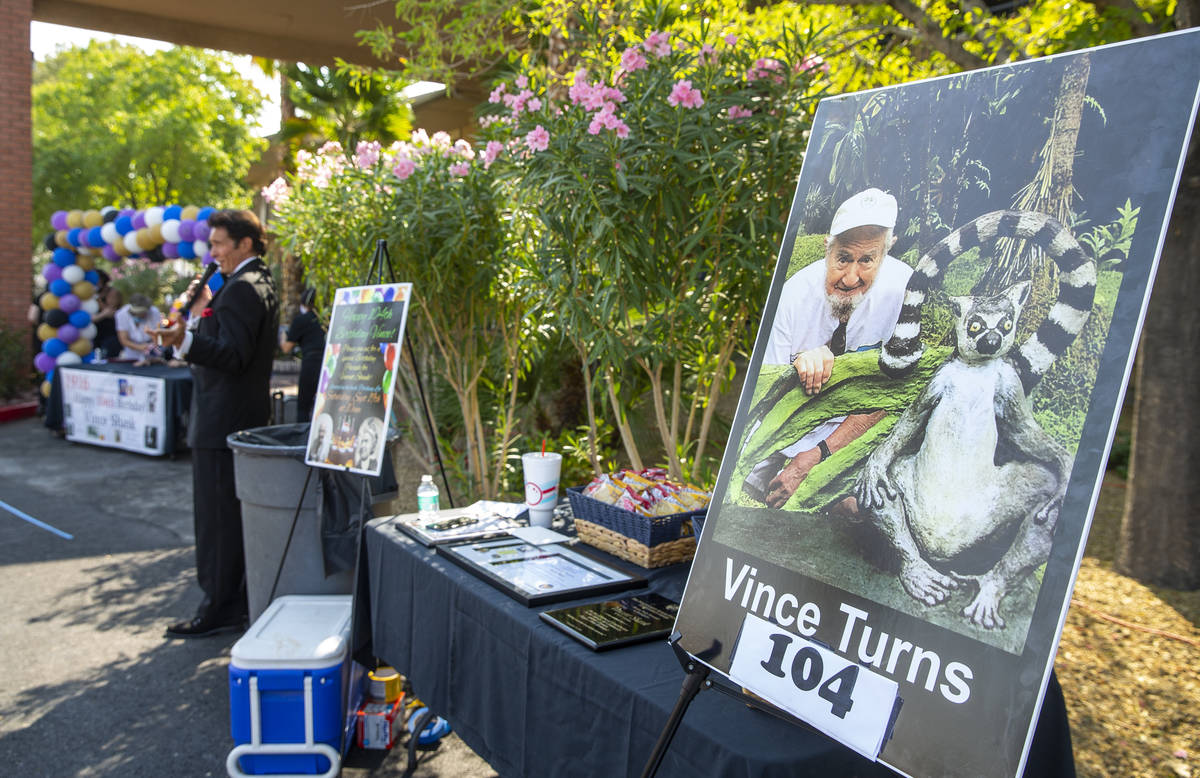 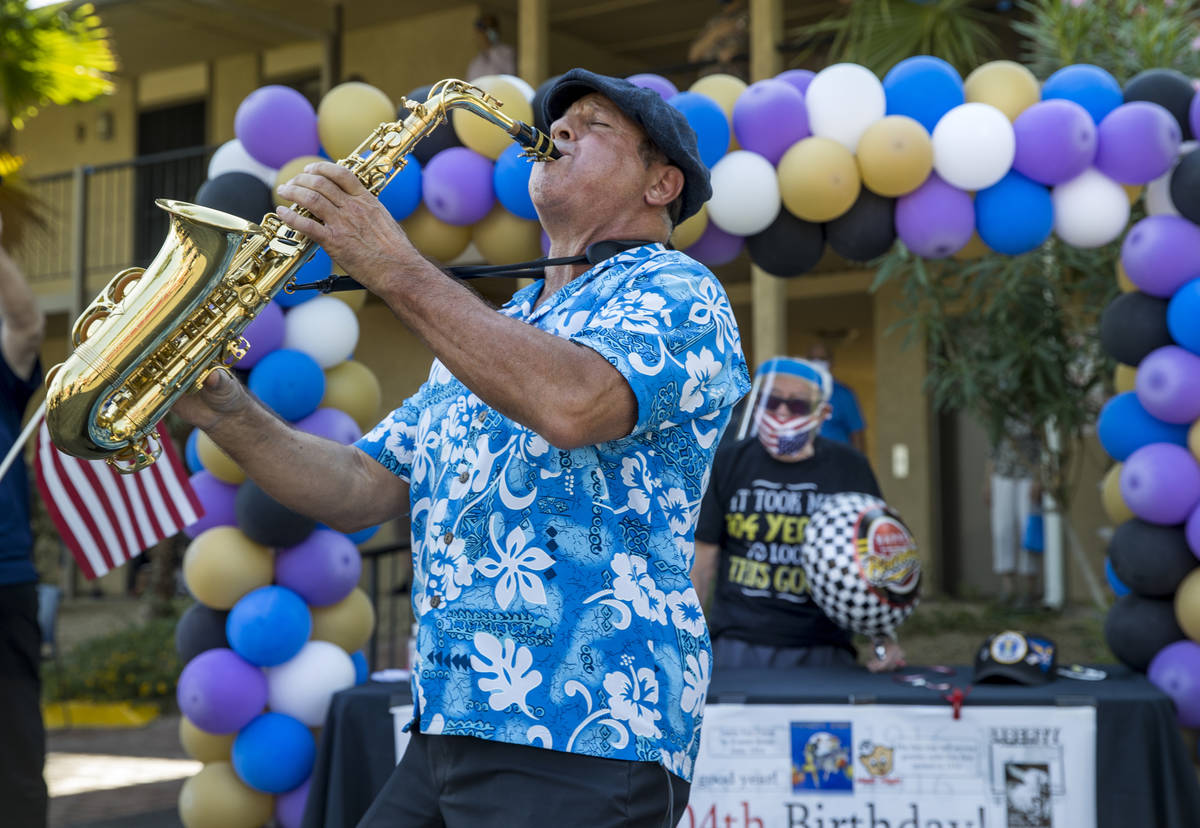 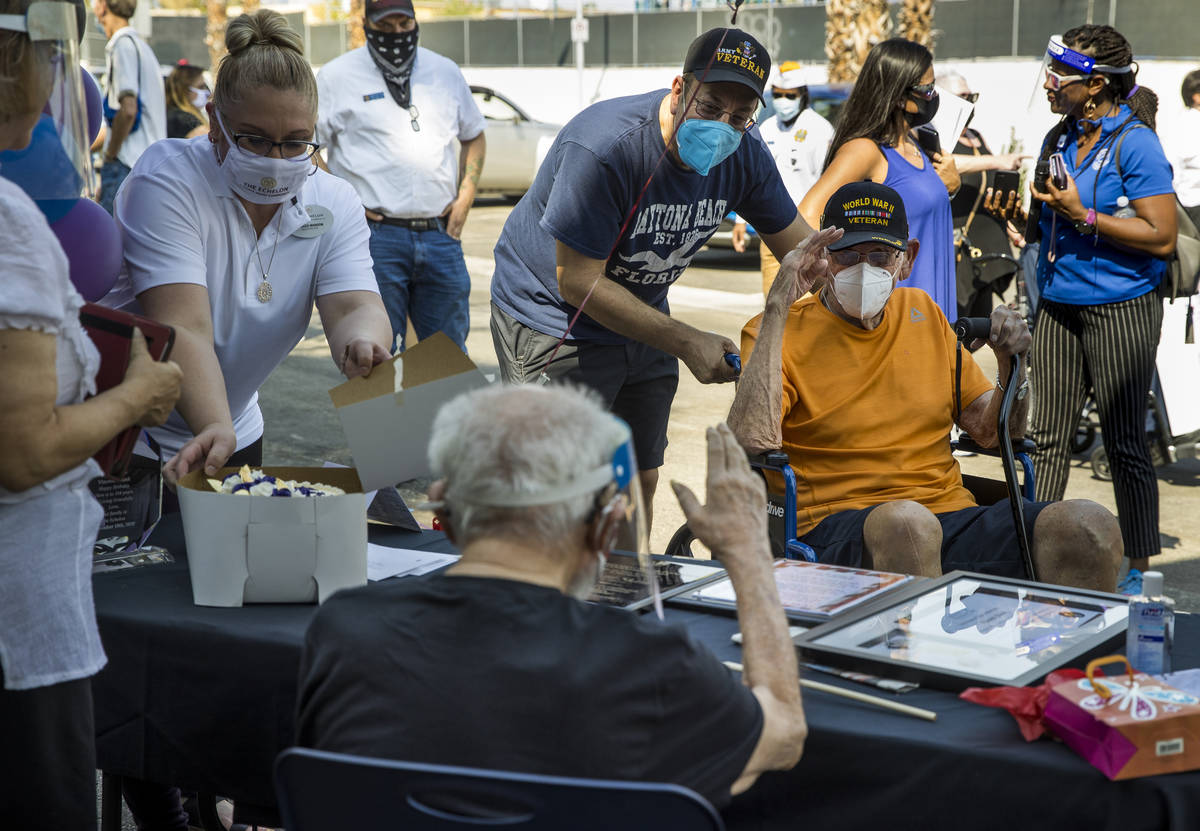 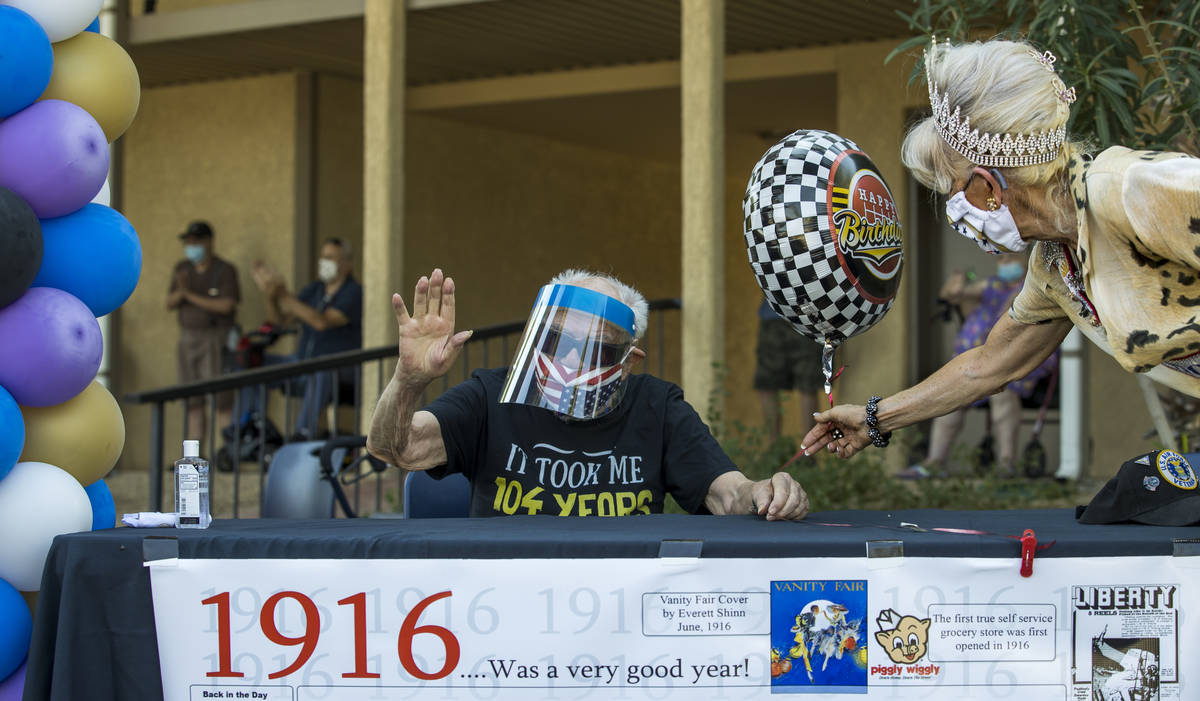 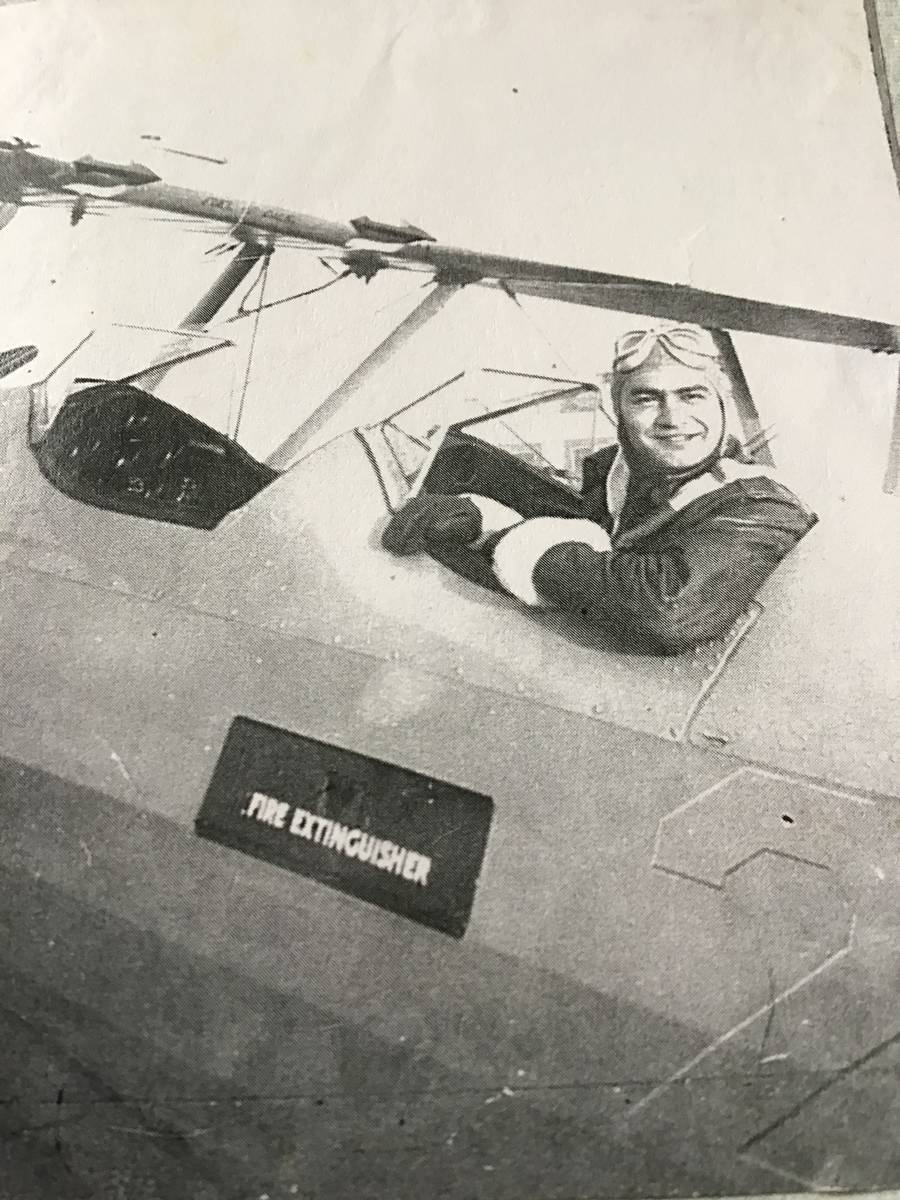 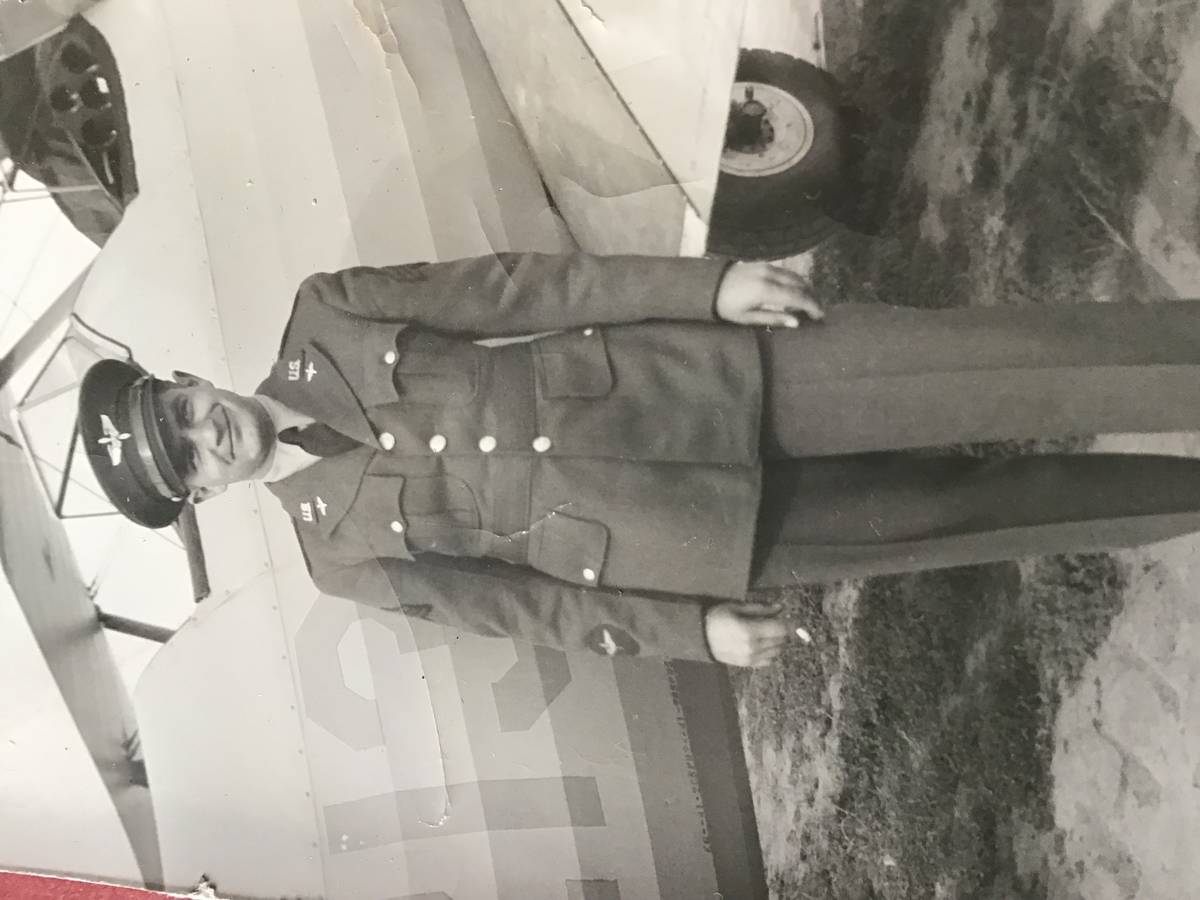 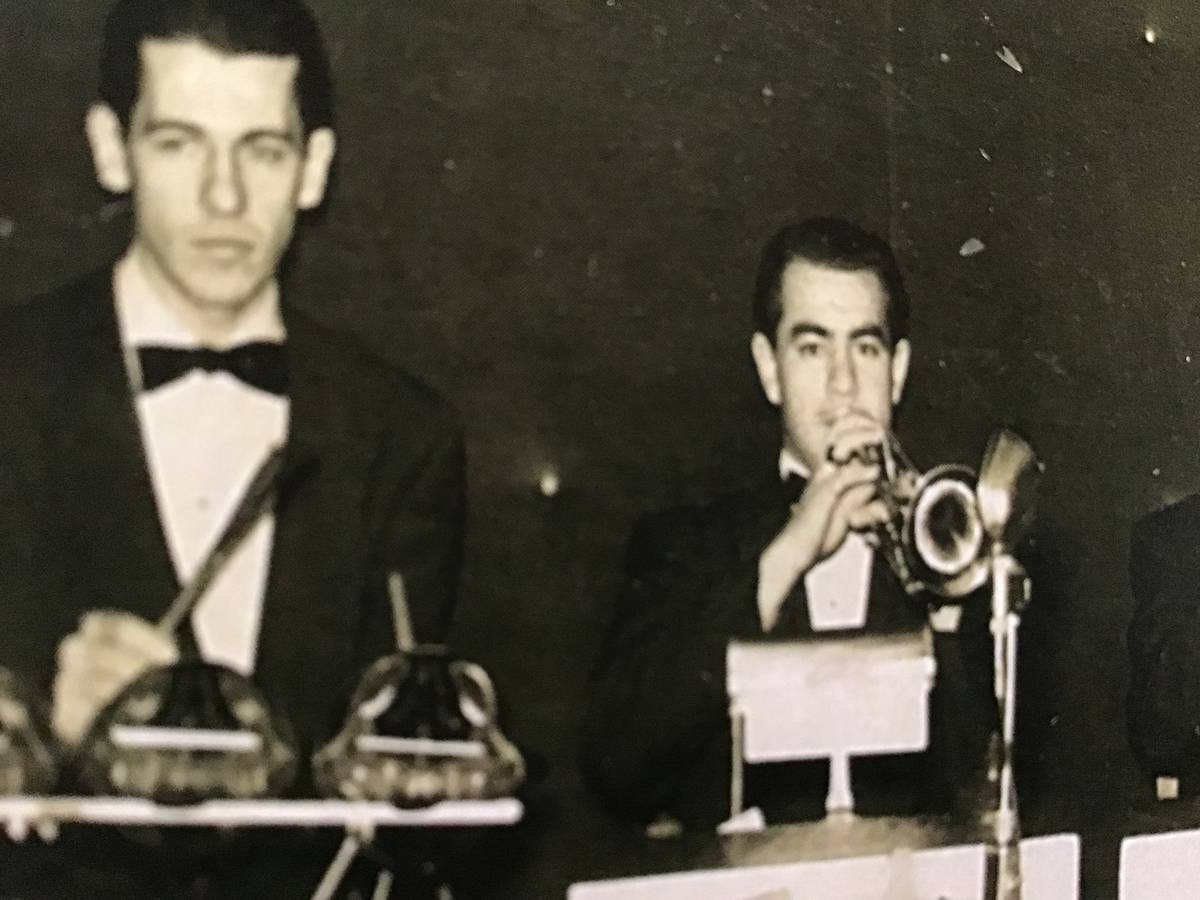 Former Army Air Corp 1st Lt. Vincent Shank performs on his trumpet during his 30-year career playing in the Rat Pack and bands on the Strip. (Nancy Shank) 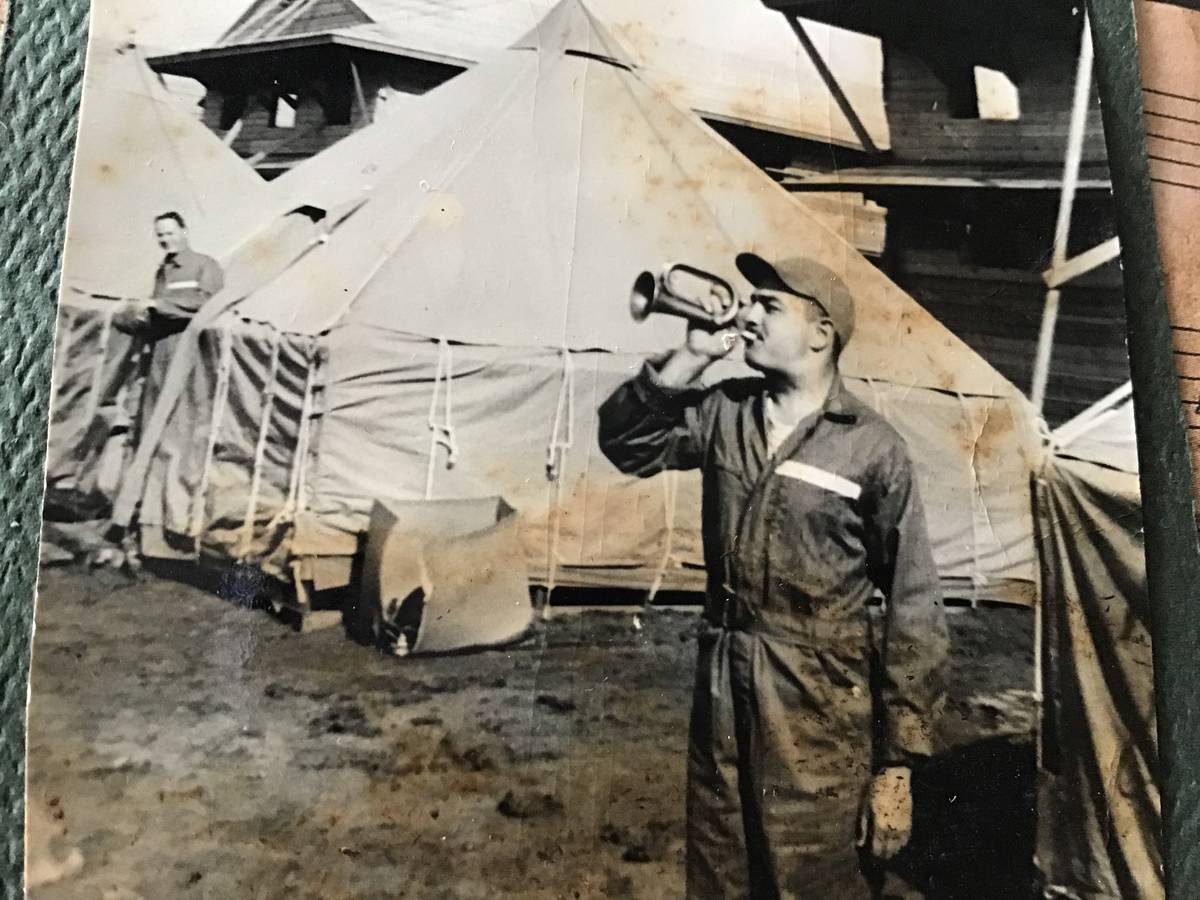 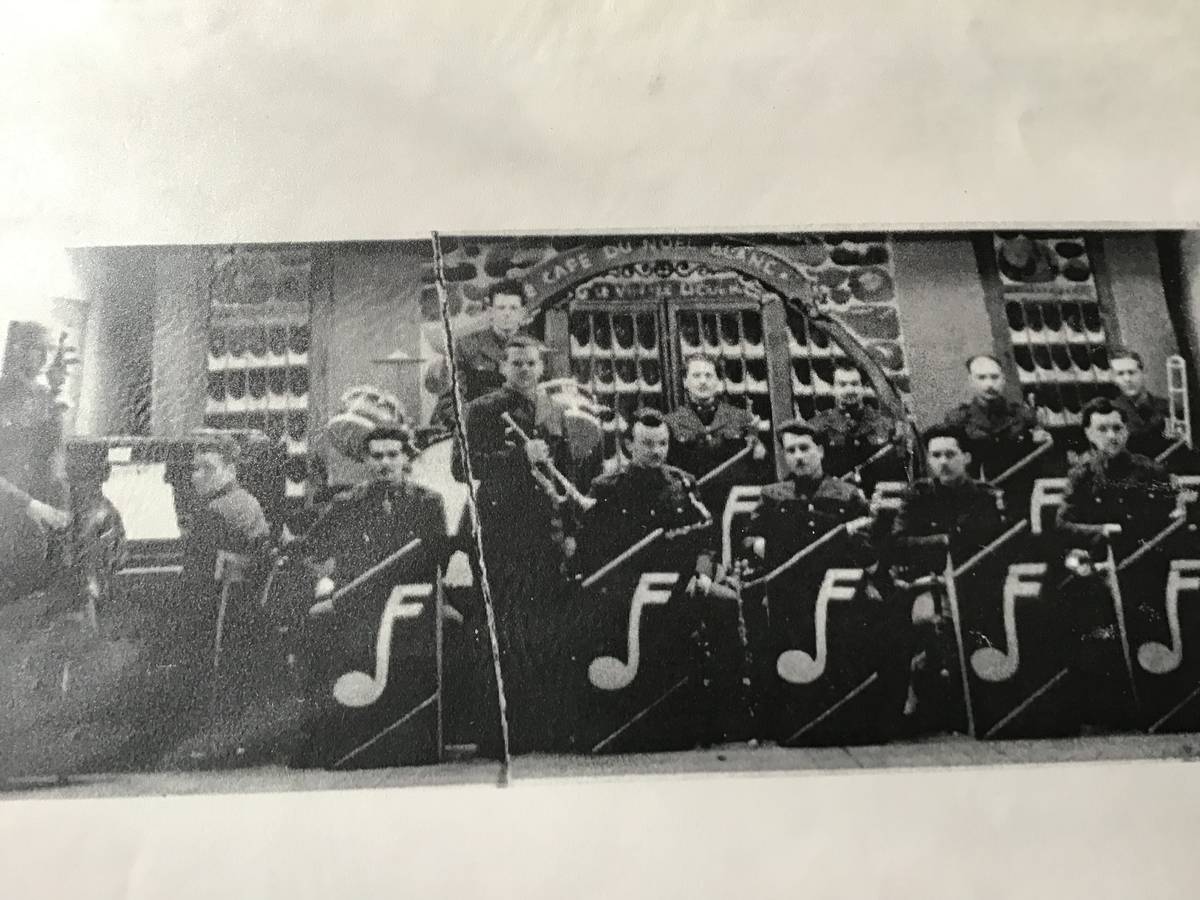 Army Air Corp 1st Lt. Vincent Shank (top row, third from the right) poses with his trumpet with the band he played in while in a World War II prison camp. (Nancy Shank)

Moments before 1st Lt. Vincent Shank was captured by Italian police in 1943, he found himself landing in a tray of cookies in the middle of a Sicilian town.

As he struggled to remove his parachute, he fought off a troupe of women who spit on him and pulled his hair.

“They were screaming because the enemy was coming down in their hands,” he says now.

He was taken by law enforcement, who stripped him and interrogated him. Shank would spend the next two years — the rest of the war — in prison camps across Europe.

He was 26 then, and on Saturday morning he celebrated turning 104.

To his surprise, he was met with a socially distant drive-thru parade at his senior living building off Eastern Avenue. He was also presented with a letter from Nevada Rep. Susie Lee, and danced along to live Rat Pack music, listened to a saxophone player performing “The Star-Spangled Banner,” and watched a patriotic man navigate on stilts.

Shank remained socially distanced from the dozens of participants and wore a shield to cover his face and protect himself from the coronavirus. He wore a shirt that said, “It took me 104 years to look this good.”

“Happy birthday, Vince. We love you, this is all for you,” said Colleen McBride, the executive director of Echelon Senior Living, where Shank has lived for about five years. Echelon, along with Infinity Hospice Care and the Independent Senior Foundation helped orchestrate the party.

“This is really nice; and what beautiful weather we have today,” Shank said with a sheepish smile. “I’m just so lucky to be here. Think of all the guys who didn’t make it.”

Quarantining at home during the coronavirus pandemic has taken a toll on Shank, said his daughter, Nancy Shank, so it was good for him to celebrate.

“He has PTSD, so not being able to leave and visit with people brings him back to the feeling of being trapped,” she said. “The parade was great, and he really appreciates it.”

He was also held at the infamous Stalag VII-A POW camp at Moosburg, Germany. Another man in attendance, Vietnam-era Army Sgt. Richard Moyer, said his late father, Pvt. Raymond Moyer, was also a prisoner at that camp.

“We survived,” said Whitaker, who hadn’t seen Shank in months due to the pandemic.

Shank joined the Army Air Corps — the forerunner to the Air Force — to become a pilot. He said he washed out of pilot training one day when trying to land in the middle of a crosswind.

“Instead, they made a bombardier out of me,” Shank said. “That was a terrible disappointment in my life.”

Shank joined the 348th Squadron of the 99th Bombardment Group, flying missions across the Mediterranean Sea from his base in Tunisia.

On his 32nd mission July 5, 1943, to soften up targets in Sicily for an upcoming invasion, the B-17 encountered enemy fire. Two of the engines had been knocked out by German planes. Four of the nine men in his aircraft died.

The copilot had also gotten hit, and was leaned over the controls as the pilot held his body back to navigate, Shank remembers. Eventually, the pilot rang the bell and the surviving men abandoned the aircraft.

Shank jumped out at about 10,000 feet. As he came down, he was alone, and it was quiet. The only sound he remembers is his pants flapping in the breeze.

“This was my lowest, lowest moment. I was thinking about my mother. What in the world would she say?” he said.

That day, he wrote in his journal, while sitting atop a mattressless wooden platform.

“I don’t believe I have ever really known how long a day is,” he wrote.

At the police station, he was stripped down to his underwear and interrogated. In the first camp, the men were constantly bothered by ticks and fleas and had two meals a day, 16 hours a part, and were only given time for walks about once a day, he wrote in his journey.

While at the Stalag Luft III camp, men who were musicians in the camp were given instruments provided by the Red Cross.

Before the war, Shank had landed a job as a trumpet player at a Lake Tahoe hotel with a dance band that traveled across the country playing gigs at major hotels.

After the war, he eventually landed in Las Vegas during the Rat Pack era. He played in house bands at bygone casinos including the Sands, Dunes, El Rancho and Silver Slipper until he retired in 1982.

At the camp, he joined other musically inclined prisoners and formed a band. They put on concerts for the others in the camp.

He’d play the popular tunes at the time to lift spirits in the camp. And whenever someone tried to escape and were killed, Shank would play “Taps” on his trumpet.

“I’m so proud of you men, that you kept your civility during this time under conditions like this,” Shank remembers Patton saying. “We’re going to get you out of here.”

Shank weighed a mere 125 pounds by then and stood feet away from Patton as he delivered his speech. It was a thrill, he recalled, to see the general in a beautiful uniform, revolvers made with ivory grips sitting on each of his hips.

Shank usually rolls around the Veterans Day parade each year in a car with a banner that reads his age and “World War II Prisoner of War.” He won’t get to this year: The parade was canceled due to the COVID-19 pandemic.

But the crowd of thousands usually goes wild, with some people running alongside the car to get a glimpse of the centenarian. One man tried to jump into the car, and many children walk up to Shank and give him handwritten cards.

“It’s like he’s the pope or something,” Nancy Shank said. “It’s so emotional, because they’re just so supportive. He gets a lot of love for that 20 minutes on the route.”

Shank got a lot of love on Saturday, as dozens of cars, including a Nevada Highway Patrol car, honked their horns and waved to him as they drove through the complex. One woman, Carolyn Katz, raced by on her motorized scooter wearing a balloon hat.

Shank said the secret to a long life is to stay healthy and laugh a lot. He walks around his complex each day. Before the pandemic, he did daily workout classes. He takes his vitamins and has only ever had high blood pressure. He’s always learning and recites to himself a daily affirmation that goes:

“I’m lovable just the way I am. I deserve to be healthy and happy and fulfilled in my life. My body has a healing system and knows how to heal itself. My body is healing itself right now. I give thanks that this is so, and so it is.”